Acharya is a member of Nepal's constituent assembly, which is drawing up the country's constitution and suggesting amendments to its legal code, the Muluki Ain. For now, the assembly also functions like a parliament.

"[The bill] shall be our effort to grant equal status to homosexual and heterosexual relationships," he said in reply to questions from Scroll.in. "The Muluki Ain is 160 years old and the last serious amendment to was [made] 50 years ago. Efforts are under way to revise it and give it a new progressive face."

A committee set up four years ago had prepared a proposal for amendments to be made to the Muluki Ain. That draft is being revisited right now to reflect modern realities, Acharya said.

A step backwards
In 2011, this committee sought to criminalise homosexuality by prescribing criminal prosecution for "unnatural sex without consent" and defining marriage as "a union between a man and a woman". Human Rights Watch described this proposal as “extremely regressive”.

The proposal came as a shock because it overturned a landmark judgement delivered by Nepal's Supreme Court in 2007 that decriminalised same-sex relationships and asked the government to formulate the laws to reflect the judgement.

Acharya's assurance should assuage fears among Nepal's Lesbian Gay Bisexual Transgender and Intersex community that the government would confirm the committee's 2011 proposal. At the country's annual parade, the Gai Jatra, in Kathmandu on Monday, members of the community protested against rising incidents of violence against queer people, and demanded equal treatment in the eyes of the law. 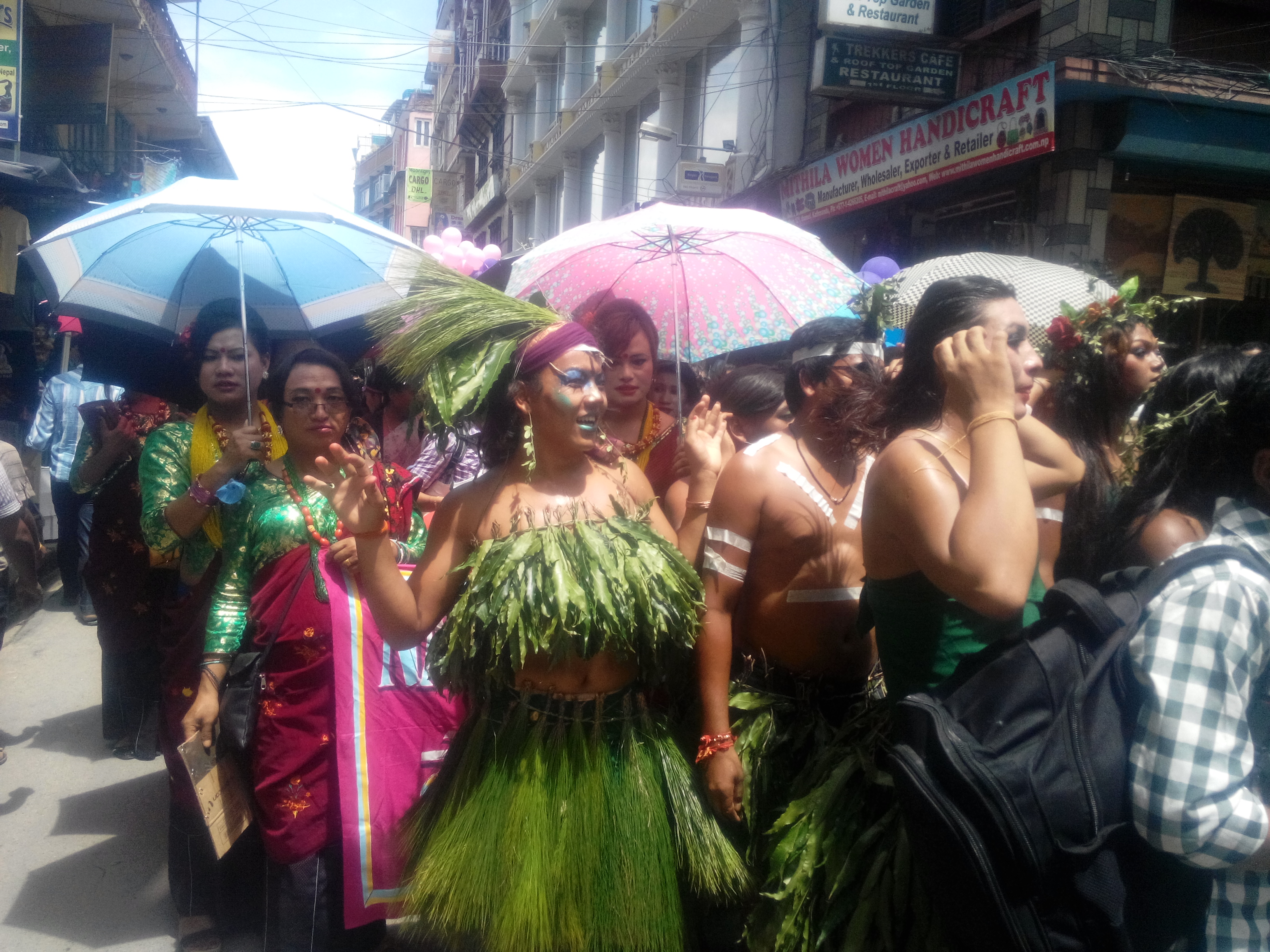 One of the main reasons for the slow progress in formulating a constitution and amending the legal code has been protracted political instability in Nepal. In 2012, the constituent assembly had to be dissolved after it failed to draft a constitution even though it had been given many extensions. In 2013, the assembly was reconstituted after a fresh election, and it will consider the bill being drafted by Acharya's ministry.

As it stands, no law specifically prohibits homosexuality, but a chapter on bestiality in the Nepali penal code can be interpreted as such. This chapter's main thrust is to prohibit sexual intercourse between humans and animals but it also says that “no person shall commit…or cause to commit unnatural intercourse". By leaving the term "unnatural sex" open to interpretation, the clause acts like a sword dangling over the heads of the LGBTI community.

“What exactly can be termed unnatural intercourse or sexual intercourse against the order of nature is, of course, a matter of debate," Semanta Dahal, a Kathmandu-based lawyer wrote in The Kathmandu Post  last year. "But it does appear that this imprimatur legal provision can be used by the orthodox to try and restrict homosexual activity between two consenting adults."

Fear and scepticism
Given this backdrop, gay rights activists are worried that the constituent assembly might not approve the bill. More seriously, they are upset that they have not been taken into confidence in the process of drafting the bill.

"We have heard that a bill is in final stages of preparation," Suni Babu Pant, a former parliamentarian who is Nepal's first openly gay politician, said in a Skype interview from the UK. “We are completely in the dark about what revisions, if at all, are being introduced. We were never consulted, let alone asked to make a representation."

While Pant said Acharya has been very sympathetic to the queer cause,  he does "not trust the homophobic bureaucracy".

When told about these concerns, Acharya reiterated his ministry's stand that homosexuality would not be criminalised, and expressed hope that if drafted sensitively, the bill would make it through. "The context is such that, the majority of Nepali public is not yet comfortable [with] same-sex relationships," he said.

"However, while drafting the act, the law ministry plans to sensitively word it, and address the matter with a very liberal approach," he added. "This shall be our effort to grant equal status to homosexual and heterosexual relationships in Nepal. Hopefully, the parliament shall judge the issue with required sensitivity."

Social attitudes
After the 2007 Supreme Court decision, the government took some steps to recognise the rights of LGBTIs. The judgement also emboldened members to come out. In 2008, five openly gay men contested the election to the constituent assembly.

Then in 2011, for the first time, Nepal's census recognised the third gender, becoming the first country in the world to do so. In June 2012, the Supreme Court of Nepal ordered the government to issue passports with a provision to mark the third gender.

In 2007, the government also amended the Nepal Citizenship Regulation, 2006, and put in place guidelines for citizenship certificate distribution for people of the third gender.

At the same time, LGBTIs have been targets of violence. "The government failed to prevent an escalation in threats and violent attacks on LGBTI rights activists in 2013," Human Rights Watch said in its 2014 annual report for Nepal, pointing out that "in early February, four transgender women were arrested under the Public Offense Act, a vaguely worded law that can result in up to 25 days in detention and a fine amounting to more than $300".

The LGBTI community faces a double victimisation, Pant said. “While they are not entitled to any privileges [such as owning property], they are slapped with harsh punishments," he said. If Acharya's bill fails to live up to his promises, the community will go to the Supreme Court again, he said.