Contribute Now
Ad
Pakistan’s army has the remarkable ability to bounce back after defeat. It lost half the country, a war, and 90,000 soldiers in 1971, but took only six years to return to the forefront of politics, executing sitting prime ministers and running the country – or whatever was left of it. While this kind of resilience is much appreciated in sports teams, ‘bouncing back’ is not exactly what one desires of a country’s military when it comes to taking on the political class. The events in Islamabad last week signal yet another moment in Pakistan’s rather unfortunate history where the Army is at the centre of domestic politics once again.

How did this happen? It started when the government invoked Section 245 of the Constitution, which brings in the Army in to maintain law and order. This law is meant to be used in exceptional circumstances. While some have reservations about how exceptional a protest in the capital by the ever-agitating Imran Khan can be, the beleaguered prime minister Nawaz Sharif obviously thought so. He also thought he could convince people that the move was prompted by the (more loosely defined) “security situation” in the country – and had nothing to do with Imran’s inappropriately named ‘Azadi’ march. Having virtually ignored Imran Khan and his allegations of fraud in last year’s elections for a year, Nawaz reacted late and disproportionately when he decided to take Imran’s protests seriously.

Security forces were hardly required at first, as the protests remained peaceful for weeks. But Khan wanted more. Despite an explicit agreement not to breach the red zone, a high-security area of Islamabad that houses foreign embassies, the Supreme Court, Parliament, the residences of the prime minister and president and the headquarters of Pakistan Television, Imran decided to shift his protests to the front of Parliament. Even then, police resolve stood firm. The shipping containers – a powerful new symbol in Pakistani mass politics – that the police used as barricades were removed, and the protesters moved to their new location without hindrance.

Through this period, intense negotiations were taking place behind the scenes. These were bizarre days. Ahlesunnat Wal Jamaat, a sectarian, militant outfit closely aligned with the Taliban, organised a rally in support of democracy and the Prime Minister. Ijazul Haq, the son of Pakistan’s best-known dictator Ziaul Haq, became a prominent intermediary. The Jamaat-i-Islami, previously known for calling the slain leader of the Taliban a martyr, now spoke of the supremacy of Parliament.

There’s a reason why the so-called neutral parties – otherwise known for condemning jeans, killing Shias, periodically shutting down Karachi, and corruption – turned defenders of the constitution. The longer the impasse lasted, the likelier it was that the military would be called in. Most Pakistani politicians are old enough to have experienced at least two coups in their lifetime – they did not want to see a third.

But in his time as a politician Imran Khan has seen only one military coup – Musharraf taking over from Nawaz Sharif – which he supported. Khan was not to be deterred. While he has made it a point to insist that negotiations are an important part of leadership, saying that it must be part of the Pakistan state’s approach to the Taliban, this did not translate to negotiating with his own prime minister. Nothing less than Nawaz’s resignation would do.

Then, another signal from the military came in. See these tweets from the official spokesperson of the Inter-Services Public Relations, Asim Bajwa. ISPR handles public announcements for Pakistan’s military. 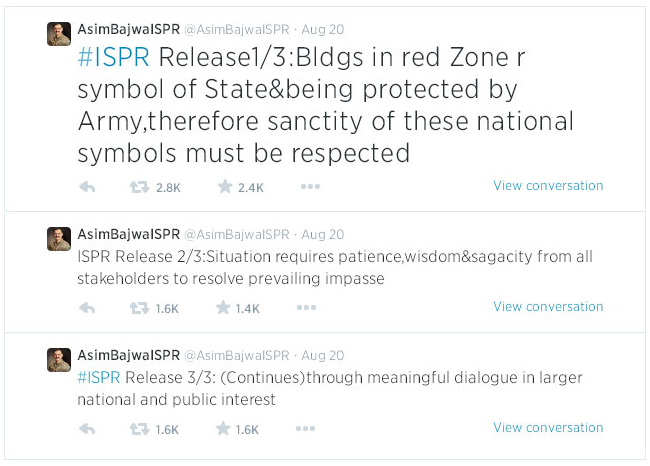 The ostensibly benign series of tweets jolted the civilian politicians. The impasse had by then approached a point of tedium: government officials repeating that Parliament was supreme; Imran repeating his demand for Nawaz’s resignation; all of it sprinkled with awful cricket metaphors (“there was match-fixing in the elections”, “the umpire is about to raise his finger”).

Life in a broken city

At this point, life in Islamabad had ground to a standstill. People couldn’t get to work, cell phone service was intermittent, planned visits from foreign leaders were canceled. There seemed no end in sight. Despite not a single allegation being proved, Imran had repeated his allegation of dhaandli (electoral rigging) so many times that it had damaged the government’s credibility considerably. Islamabad was left with one rabid, vitriolic politician on the warpath, and another hiding in his mansion in Lahore, paralysed.

Whenever the army has jumped into domestic politics in Pakistan it has been perceived as a relief – relief from the pettiness and inertia that inept, squabbling politicians bring to the state, embarrassing the country internationally. The army – apolitical, steadfast, strong, silent, above the fray – looks good in comparison.

So when the army was invited to intermediate in talks between the government and protesters last week, many welcomed the development.

The politicians, of course, knew better. Very quickly the debate became about who had called in the Army. Nawaz Sharif announced in a session at Parliament that Imran wanted the Army to mediate, and that the Army had sought Nawaz’s permission to play that role. Imran denied the claim, saying that the government called in the Army as a sign of desperation.

The army landed on Khan’s side, tweeting, again seemingly innocuously, that “#COAS was asked by the Govt to play facilitative role for resolution of current impasse, in yesterday's meeting, at #PM House.”

The tweet humiliated the government, in effect branding it a liar to the people. The government squirmed, responding that it called in the Army to facilitate, not mediate. Nobody but the government knew the difference.

Then, on Saturday night, the levee broke. Apparently responding to a mysterious ‘message’ midway through his speech, Imran called on his supporters to occupy the Prime Minister’s residence. Tear gas was shot, clubs wielded, and violence, kept at bay for so long, engulfed the capital. Three dead, hundreds injured. And it’s getting worse. Early on Monday the state news broadcaster’s headquarters was occupied by protestors, who blocked transmission. Despite being charged with protecting government buildings, the army’s inability to stop the rioters is conspicuous.

On Sunday, army bigwigs met at general headquarters to decide the fate of the country. It looks like they won’t be staging a coup – yet. They voiced “serious concern” at the violence, saying “further use of force will only aggravate the problem”. They also issued a reprimand regarding the way the police has handled the situation so far.

On Monday, the army chief met an increasingly desperate Nawaz Sharif. He presented Sharif with a range of options, including taking leave for a month. Sharif said he would be staying at Islamabad and in his chair, but for how long is anybody’s guess.

The metric is simple: the longer the chaos continues, the more the people will want the army to intervene. They will once again be called in to ‘save’ democracy and the state, as the situation spirals out of the hands of those protesting and those hoping to keep the peace.

It has been six years since the country was last under military rule. Barely a year after Pakistan’s first peaceful transition from one elected government to another, the stage for the army chief to proclaim, “mere aziz hum-watnon” – a phrase indelibly associated with martial law in Pakistan – has once again been set.

Why Ethiopia is on the brink of a civil war