Contribute Now
Ad
Between 2013 and 2014, at least 67,000 children in India went missing , of whom 45% were minors trafficked into prostitution. According to the National Crime Records Bureau, a girl is abducted every eight minutes in India. A US report on human trafficking states that India is one of the world’s main hubs for child sex trafficking.

According to child rights activists, the inefficiency of the authorities has allowed child-trafficking syndicates to flourish. “These syndicates are strong, well-connected and operate discreetly,” said Rishi Kanth, a child rights activist with the NGO Shakti Vahini. “It has become very difficult to crack down on them as they are very precise and never leave a trail.”

The statistics, however, tell only part of the story. Activists say the number of registered cases is far lower than the actual incidence of such crimes in the country. They say that policemen across India refuse to register First Information Reports for poor missing children as it affects their station’s performance evaluations – and that they have to look for the child.

Kanth, who has been working in this field for almost a decade, said his NGO recently rescued a minor girl forced into sex trafficking from Jharkhand. “She is a tribal girl who was kidnapped and later sold to a local brothel in Ranchi,” he said. “Her parents had approached the local cops on several occasions but they wouldn’t register a case.”

Many girls are drugged and kidnapped. A senior police officer at the Crime Branch in Delhi explained a method of operation popular especially in the eastern states, West Bengal, Bihar and Assam. Some families also sell young daughters into the flesh trade, the police say.

“There are over 100,000 minor girls abducted and trafficked every year, but the registered number of missing children is barely a thousand,” said an official with the Anti Human-Trafficking Unit, a special group of the Crime Branch in Delhi. “This is because parents are selling off their young daughters for money. We have caught several of these cases in Jharkhand, Bihar and West Bengal. Sometimes the girl child has been sold for as little as Rs 250.” 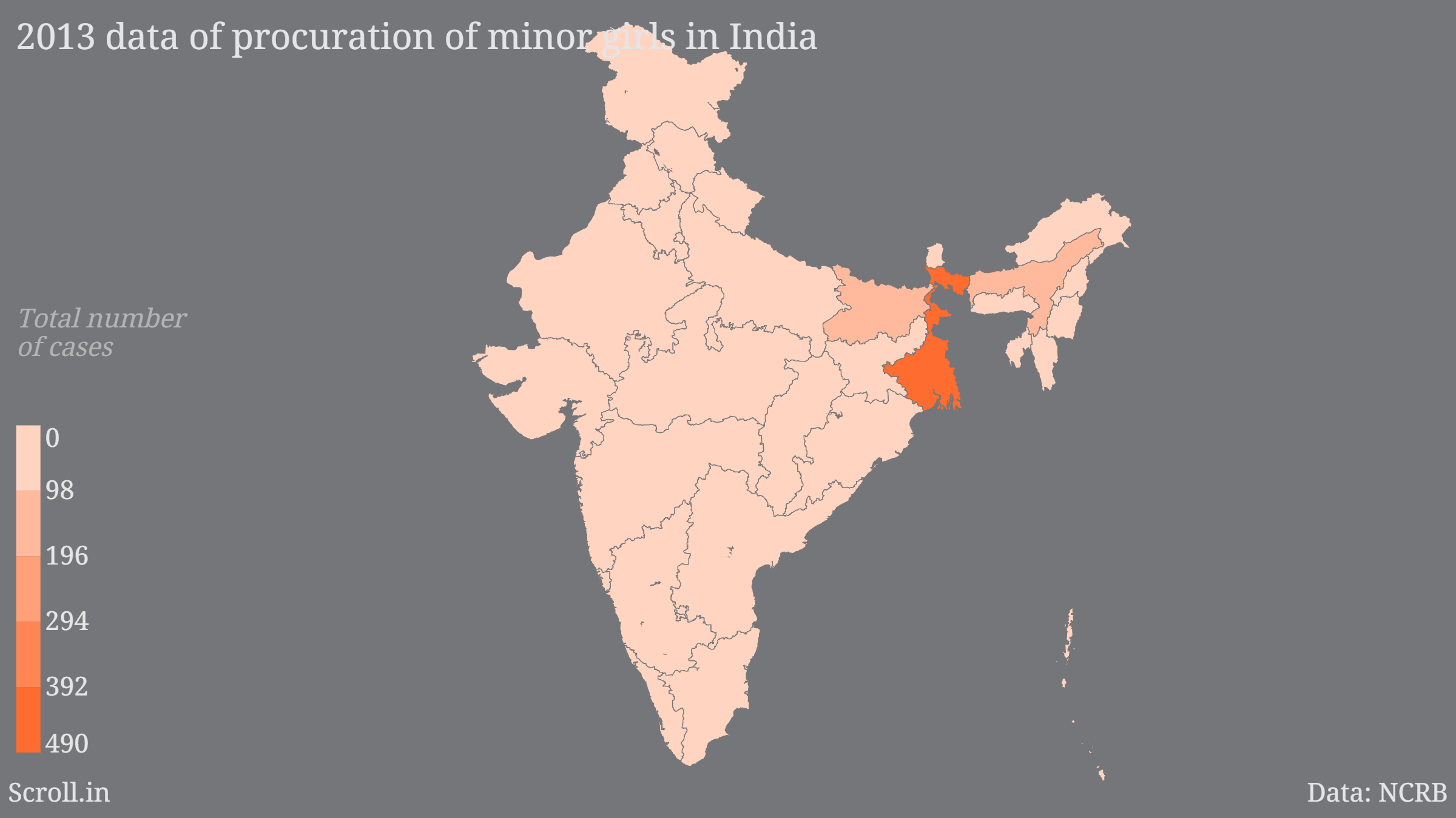 An activist Scroll spoke with said the reason West Bengal has the highest rate of child sex trafficking is because the state shares international borders with Bangladesh, Nepal and Bhutan. Illegal immigrants, who have no recourse to the authorities, are particularly prone to becoming the targets of such networks.

India, Brazil, Mexico, Cambodia and Thailand have been identified as the leading hotspots of child sex trafficking in the world, according to the UNICEF State of the World’s Children Report. Thailand’s Health System Research Institute reports that children make up 40% of the prostitutes in Thailand. Similarly, in Cambodia, one-third of all prostitutes are girls under the age of 18. In India, one lakh minors are forced into prostitution every year.