Contribute Now
Ad
Should Chinese tourists visiting India be granted visas-on-arrival? The Home Ministry and the Ministry of Tourism are debating this question, but travel industry statistics and India’s own diplomatic plans might give Tourism Minister Mahesh Sharma the upper hand.

On Tuesday, Sharma asked Home Minister Rajnath Singh to extend the visa-on-arrival facility to China, Spain, Italy, France and the United Kingdom, in a bid to boost tourist inflows. While the European countries are likely to get smooth approvals, the Home Ministry will make a decision on China only after discussions with intelligence agencies, which have raised security concerns about such an action.

In November 2014, the Narendra Modi-led government introduced the facility for 43 countries. With Modi due to visit Beijing in May, Sharma’s ministry is eager to get China into the next phase of the plan.

The number of Chinese tourists travelling the world is growing fast, and India wants a slice of pie. To attract more Chinese travellers and promote bilateral relations, the Indian embassy in China is already promoting 2015 as "Visit India Year". (Beijing will reciprocate with a "Visit China Year" in India next year).

Over the past 15 years, the Chinese have come to be recognised as avid globe-trotters. In 2000, for instance, Chinese tourists made 10 million international trips; the figure rose to 83 million in 2012 and almost 100 million in 2014.

In 2013, Chinese tourists spent $129 billion abroad, more than any other source market in the world, said the United Nations World Tourism Organisation.  That figure is expected to soar to $264 billion by 2019.

Despite this, India has not been a popular tourist destination for the Chinese. China is not even among the top ten source countries for foreign tourist arrivals in India. In 2010, China ranked thirteenth on the list of source countries, and sent only 1.2 lakh tourists to India.

From 2005 to 2010, the number of Chinese tourists visiting India rose significantly from 44,897 tourists a year to 119,530. But this increase was nowhere close to the rise in number of tourists from the US, which tops the list of source countries for tourists in India. 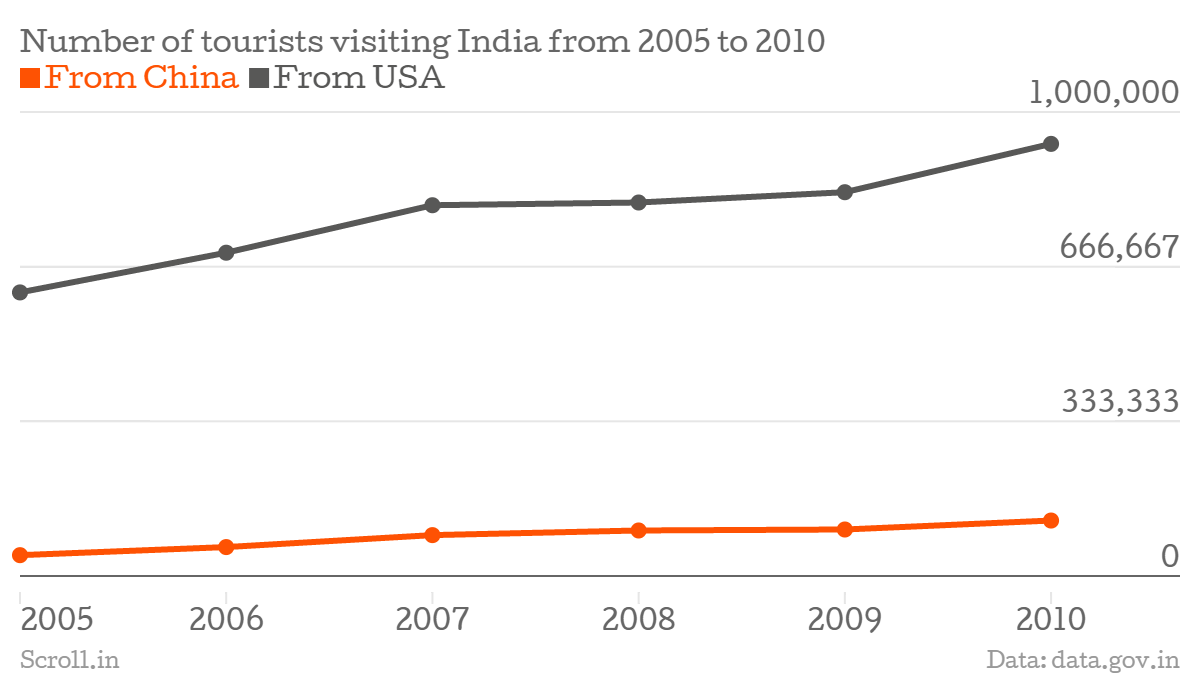 By drawing more Chinese visitors to India, the tourism sector evidently has a lot to gain.

“In the next five years, the number of outbound Chinese tourists is expected to rise to 500 million,” said Manoj Joshi, a distinguished fellow at the Observer Research Foundation and an expert on India-China relations. “India wants to cash in on that by granting China the visa-on-arrival facility.”

Visa policies between countries are usually based on reciprocity, but last year, in a bid to promote more tourism, India made a unilateral choice to introduce grant visas-on-arrival to several countries where Indians cannot travel without a visa. If the Tourism Ministry’s proposal comes through, China could be one of them.

To those promoting bilateral relations, this would be good news.

“Offering visas-on-arrival to the Chinese would be a fantastic move to encourage more tourists to visit India, understand the country better and improve trust,” said Nazia Vasi, founder and CEO of Inchin Closer, a consultancy company working to improve relations between India and China. Vasi, nonetheless, would like the visa policy to be reciprocated by the Chinese government.

According to Joshi, Indian and China have already been discussing ways to make both their visa policies simpler.

“The Home Ministry’s fear is that the visa-on-arrival facility will make it easier for the Chinese to spy on India,” said Joshi. “But the ministry should be able to detect if someone is involved in suspicious activity.”