Contribute Now
Ad
Anyone weaving through the bookstalls at the recently concluded Lahore Literary Festival would have found it hard to ignore The Eye Still Seeks, a flashy new tome affirming the rude health of contemporary Pakistani art. I mean rude: at a hefty 12 x 10 inches, with a gleaming gold square on either side of its dark grey cover, the book resembles a trophy or souvenir, and even brings to mind one of those decorous boxes in which wealthy Pakistanis nowadays send out invitation cards for many-splendored weddings. "A panoramic view," the back cover cries in uproarious caps, in case you weren’t feeling the festive vibe, "of the vibrant, brilliant world of contemporary Pakistani art."

Is there really so much to celebrate? The immediate answer is a brassy, gloating yes: herein lie artworks that have stormed the biennales of the world, from Venice and Sydney to Sharjah and Singapore, and artists, many of them under 50, who have come away bearing its most prominent prizes. Here is the recipient of a MacArthur Genius grant; a winner of the Jameel Prize for Islamic Art; a miniaturist who was commissioned to smear the rooftop of the Metropolitan Museum of Art with blood-soaked flowers.

Here too are some of Pakistan’s best-known English-language novelists, eminently exportable in their own right, each obliging us with a complimentary riff on a kindred art-making spirit. So Mohsin Hamid has some artfully truncated thoughts on Rashid Rana’s jumpy photomosaics; Kamila Shamsie is probing Naiza Khan’s muted-feminist bodyscapes; Mohammed Hanif is telling us about his fevered, near-mystical encounters with the erratic young graffiti artist Asim Butt, who spray-painted a trail of eject signs all over Karachi towards the end of General Musharraf’s tenure and took his own life the following year. Indeed, the pairing of celebrity writers with edgy young artists seems destined to stimulate a certain kind of maximalist appreciation of the Pakistani art scene, and one can just about imagine that hapless foreigner, a dear delegate at the literary festival, being simultaneously dumbfounded and reassured by this happily globalised flowering of creativity in a death-addled outback. ("Pakistan: Where Art Thrives Amid Chaos"’)

But such nervous congratulations are likely to shortchange the steady accomplishments – and struggles – of Pakistan’s long-established community of experimental artists. In a wryly penetrating commentary on the subject, art educator and gallery-owner Salima Hashmi (she also happened to edit this volume) ascribes the flourishing of diverse art practices in Pakistan to the survival of old-fashioned “academies” – a busy network of student-teacher relationships that are not unlike the guild-bound apprenticeships of yore (at one point Hashmi even likens them, rather charmingly, to “spontaneous symposia”) and are centered today at a handful of art schools in the country.

The most influential of these is the National College of Arts in Lahore, a state-mandated institution that draws talent from all over Pakistan (urban, rural, rich, poor) and churns out a more or less constant supply of bankable artists, many of whom go on to have international careers. The NCA’s success, in Hashmi’s view, is owed to the singular resilience of its faculty, a colorful bloc of worldly-wise teacher-practitioners who have, in the absence of meaningful state patronage, provided a measure of institutional stability to the transmission of old and new modes of knowledge, everything from traditional miniature-painting to new-age video and design, while also showing the way for necessary elisions in times of repression and censorship. 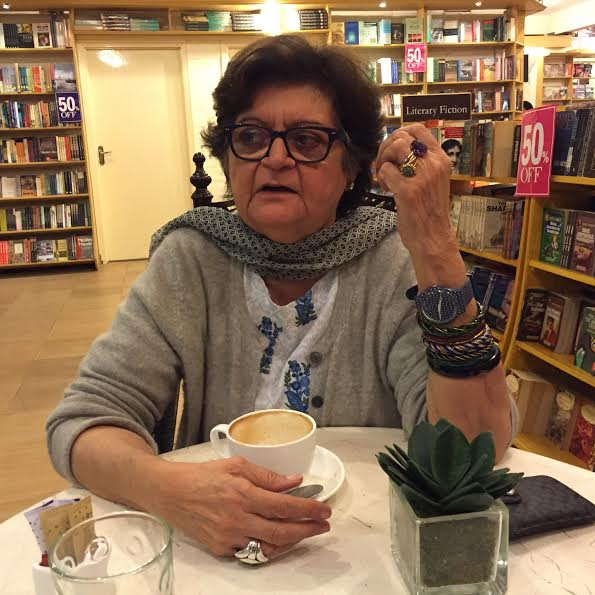 Over coffee one afternoon in Lahore, the now-71-year old art maven shares with me her favourite memories of dealing with despotic government officials and angry Islamist vigilantes while teaching at the NCA in the 1980s. There was that one time, she tells me, when a military spy who was monitoring her class decided to take issue with her timeline for human history on the grounds that it didn’t match Quranic sources. “I said ‘But human beings have such a limited appreciation of time,’” Hashmi told me, speaking in a tone of playful irony, “Could it be that what feels like 40,000 years to us is but a mere moment for God Almighty?”

It’s an intelligent answer, and a recognisably Pakistani one: subtle, open-ended, solicitous and subversive at the same time. The kind of thing you’d expect from someone who has learned to live with conflict, to more than merely negotiate it, to go beyond into an ecstasy of balance and counterpoise. It got me gazing all over again at the pictures in The Eye Still Seeks, and sure enough, the abiding traits of contemporary Pakistani art were soon before me: a love of paradox; an eye for contradictions; a simultaneous courting of tradition and its opposite, whatever that may be; and an ingrained, almost congenital ability to improvise. 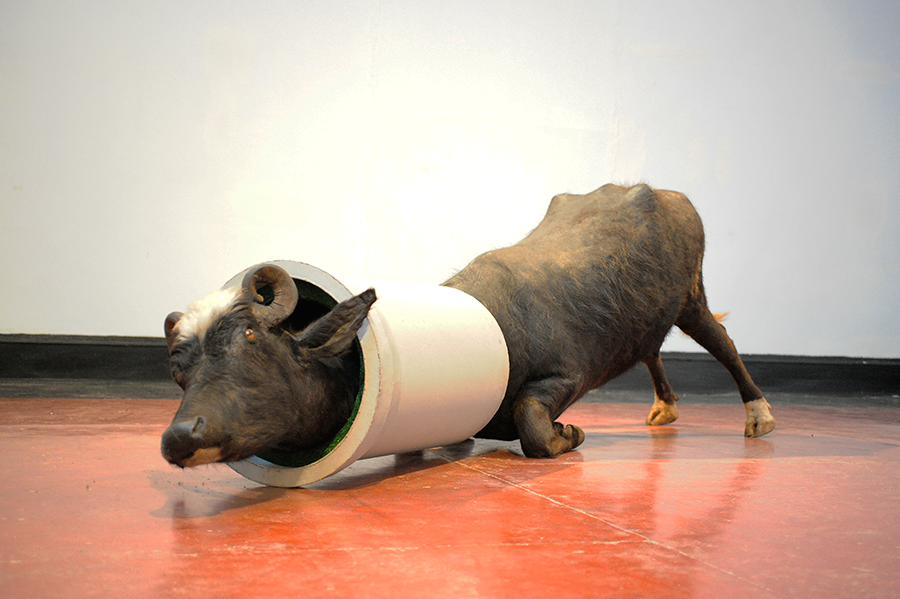 Her Suburban Dream – View 5, Huma Mulji.
"We live 200 years in the past and 30 years in the future, simultaneously," says Huma Mulji (b. 1970), a Lahore-based artist who graduated from the Indus Valley School of Art and Architecture in 1995. Her "waspish humor", according to Hashmi, has a "dark side" that isn't to everyone's liking: a life-size taxidermy camel stuffed by Mulji into a traveler's suitcase was banished from the Pakistani pavilion at Art Dubai in 2008 by the Emirati authorities, who thought it was critiquing their culture. 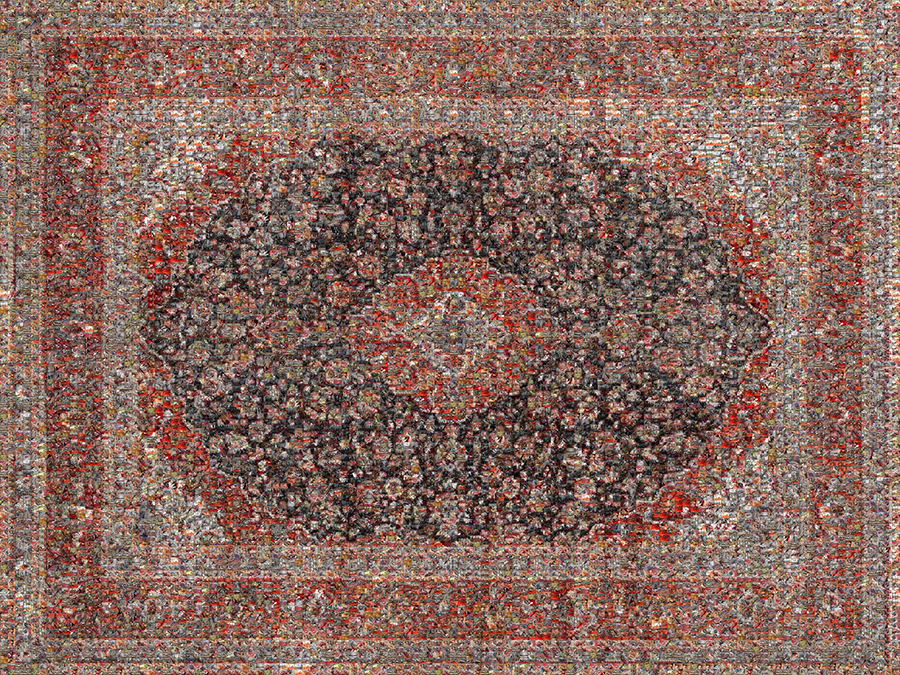 Red Carpet by Rashid Rana.
A graduate of the National College of Arts in Lahore, Rashid Rana (b. 1968) is living proof that "tough times can produce stimulating and vigorous responses." Hashmi credits him with finding in the "micro" and "macro" of contemporary Pakistani life a series of fruitful paradoxes that are enacted through unsettling photomosaics such as Red Carpet. A favorite at international art fairs, Rana continues to teach at the Beaconhouse National University in Lahore. 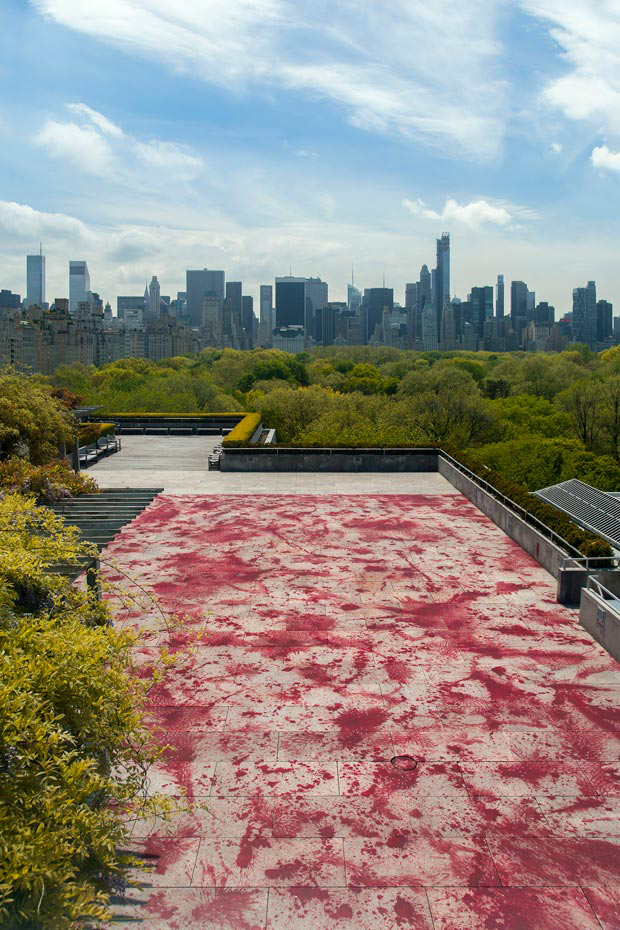 Veil and Trail by Shahzia Sikander.
Arguably Pakistan's most illustrious art export, Shahzia Sikander (b. 1969) expanded the Mughal miniature to take in transnational experiences of migration and cultural hybridity. Trained at the National College of Arts in Lahore, she went on to win a MacArthur "Genius" grant (2006-2011) and the US State Department's prestigious Medal of Art in 2012.