Contribute Now
Ad
The Mahatma Gandhi National Rural Employment Guarantee Act envisages that the works undertaken under it will strengthen natural resource management and address causes of chronic poverty like drought, deforestation and soil erosion, thereby encouraging sustainable development. However, the fact that it is not simply a work creation programme but derives its legitimacy from being an asset creation programme is often overlooked.

Contrary to the notion that people are paid for simply standing around at work sites or that the MGNREGA merely involves some digging, workers have built roads to farms and fields where there were none. They have replaced scrublands with forests, built earthen structures for collecting water and preventing soil erosion, cleared lands and levelled them to make them cultivable.

Several research studies have indicated that assets created under the MGNREGA are beneficial in terms of reduced soil erosion, increased water availability, groundwater recharge, biomass, and savings in diesel costs due to increased availability of water.

In this photo essay, we share a few examples of these assets, mainly from Maharashtra, Chhattisgarh, Andhra Pradesh and Telangana. These are examples of what the MGNREGA can achieve and has achieved. The photos and text presented here were collected over two years by researchers from the Indira Gandhi Institute of Development Research and their collaborators during field visits focused on learning about the MGNREGA. This photo essay has been compiled by Krushna Ranaware.

MGNREGA as a stepping stone

There are several instances where the MGNREGA assets have served as a stepping stone for building livelihoods. A farmer from the hilly part of Nashik built a pond on his land, and despite not being able to get it down to its planned depth (he hit a boulder while drilling, rendering the work technically incomplete), this enabled him to bring an additional three acres under cultivation which were previously inaccessible as they were located uphill and at a great distance from any source of water. Thirty-five labourers, besides the farmer, worked on this for a week.

With the help of the pond, he has been able to cultivate paddy on all nine acres of his land, revive a dying cashew and mango orchard, and plant a vegetable patch on which he grows brinjal and other vegetables. He says the pond has reduced his dependency on the monsoon for sowing paddy and has helped increase yields. He plans to try his hand at cultivating wheat next season as the pond allows him to draw water till January. Apart from his land, around four to five acres belonging to two other farmers have benefited from this pond.

Or take the case of a farmer who relocated to another village in Nashik in the early 2000s after he lost his land to a big river valley project in Gujarat. Since then, he has managed to not only buy three acres of land but has also converted a barren piece of land into a productive farm. His efforts to make a living, he asserts, were aided by the rollout of the MGNREGA.

Over the last four years, he has improved agricultural productivity by taking advantage of the opportunities to create assets – a well, embankments and land levelling on his fields – created under the Act. He uses the water from the well to cultivate rice, finger millets and onion, and has recently included brinjal to the list of produce. He also shares well water with his neighbours for non-farming purposes. He says that the well, along with other water conservation work, has allowed him to more than double his rice yields over the last three years. He also has a nursery set up under the Act next to his house.

In another part of Trimbakeshwar in Nashik, a young farmer built a farm pond under the MGNREGA, sacrificing a portion of his productive land to do so. He had seen his acquaintance in a neighbouring village farm fish and was inspired to do the same. At the time of our visit, he was into his first season of pisciculture and the entire village was waiting to see if he would succeed. If he does, “more of us will do the same,” exclaimed a villager. The farmer explained to us that this time he had chosen not to buy expensive commercial fish feed because he was still experimenting and learning, but the next time he would. The main problem, he said, was that it was hard to get a loan to run a commercial fish farm, even if the MGNREGA had provided him a stepping stone. 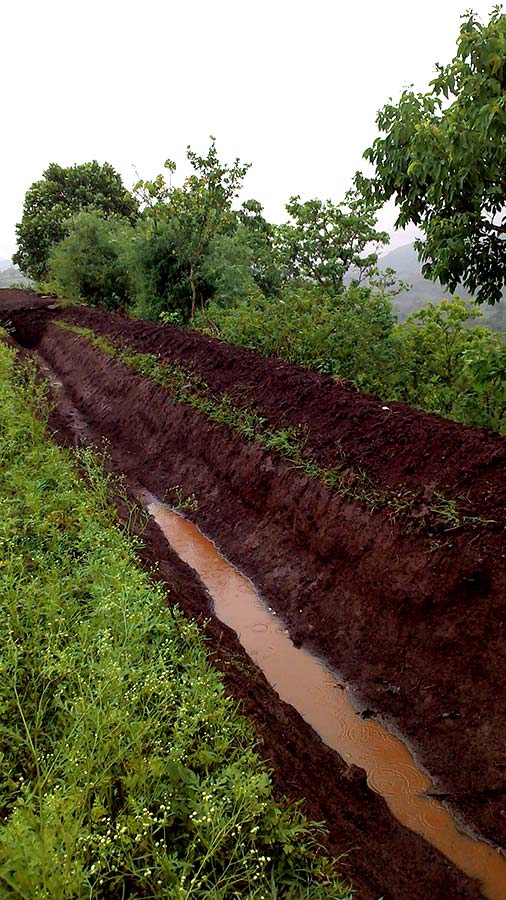 Farming in the tribal areas of Trimbakeshwar (Maharashtra) and G Madugula (Andhra Pradesh) is rain-fed. Farmers rely almost entirely on soil moisture for cultivation due to limited access to irrigation facilities. In the monsoon, rain water runs off the vast, rolling terrain, carrying off the top soil, thus allowing very little water percolation while exposing boulders in the fields.

To address these issues, farmers in these regions have taken to land levelling and constructing loose boulder structures and mud barriers. 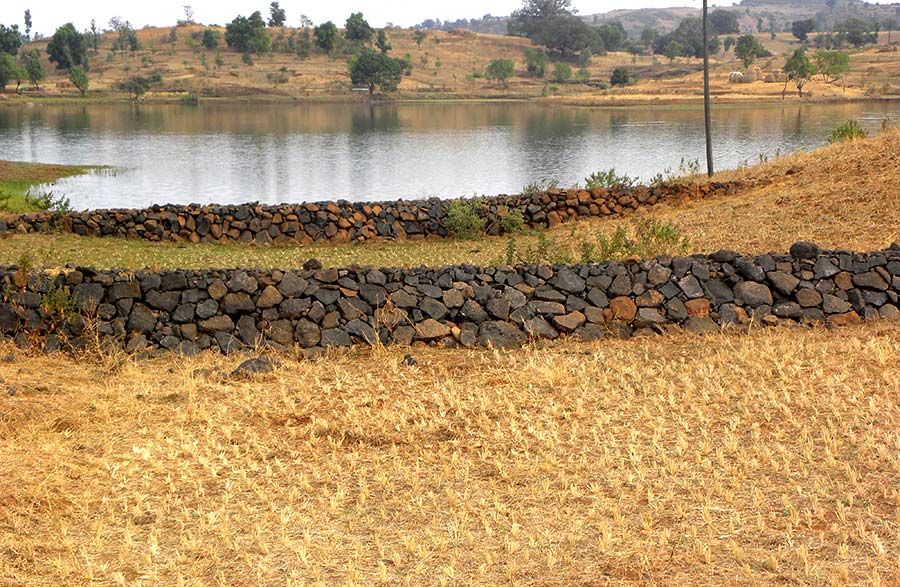 These works are found on both individual as well as public lands, and are often perceived as the toughest to work on but the most useful by beneficiaries.

A study of completed wells in Jharkhand reported that MGNREGA wells are useful assets for not only their owners in terms of diversification of crops and diets and increased availability of water, but also for others who use the water free. 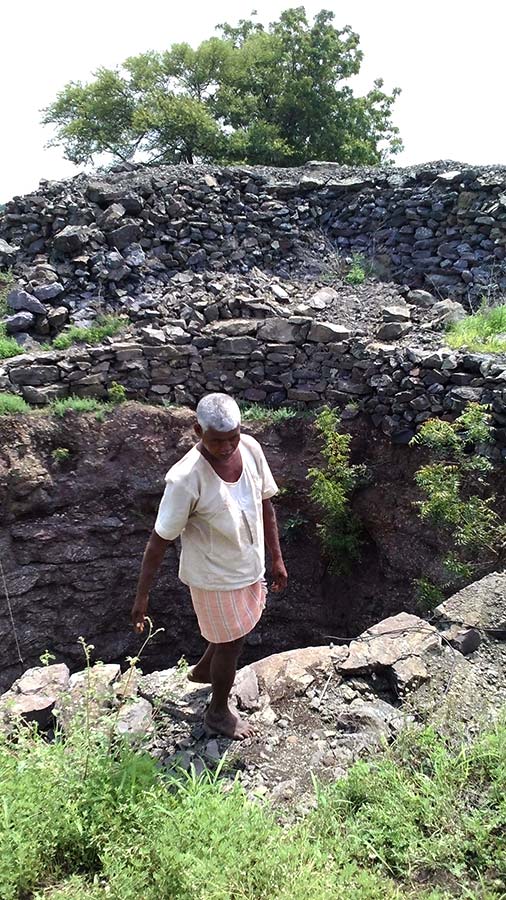 Construction of this well under the MGNREGA enabled this farmer to increase the area under cultivation for onion in Solapur, Maharashtra
Photo credit: Christian Oldiges

In a study [LINK] of assets in Maharashtra, users reported that replenishing and desilting of old wells under the MGNREGA led to timely and increased availability of water for agriculture, drinking and other purposes.

Land is the basic material asset in rural India. Farmers from the Maharashtra study report that the planting of nitrogen fixing trees such as gliricidia sepium under the MGNGREGA has rejuvenated soil health.

In Andhra Pradesh and Telangana, julliflora clearance has been one of the major types of works. Often of dubious usefulness, we did come across good examples where soon after clearing plots of land of julliflora, a farmer had begun to grow fodder, using the land for the first time in his life. We met an old woman in Mahbubnagar on whose land jullifora clearance had been undertaken and she looked forward to growing cotton, a crop she had not grown so far. 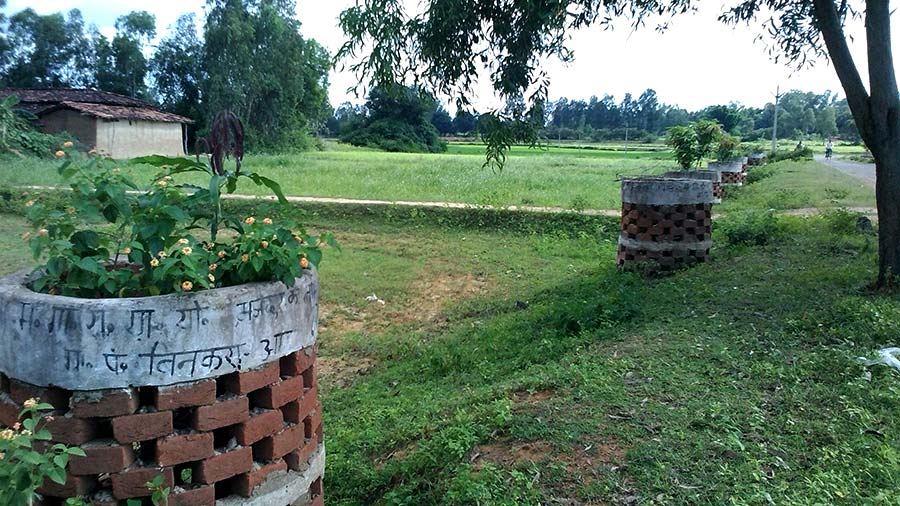 Trees on and around farms are some of the most durable assets, even as they provide a host of environmental services like nutrient recycling, carbon storage, resilient cropping environments, and enabling agricultural land to withstand extreme weather events. 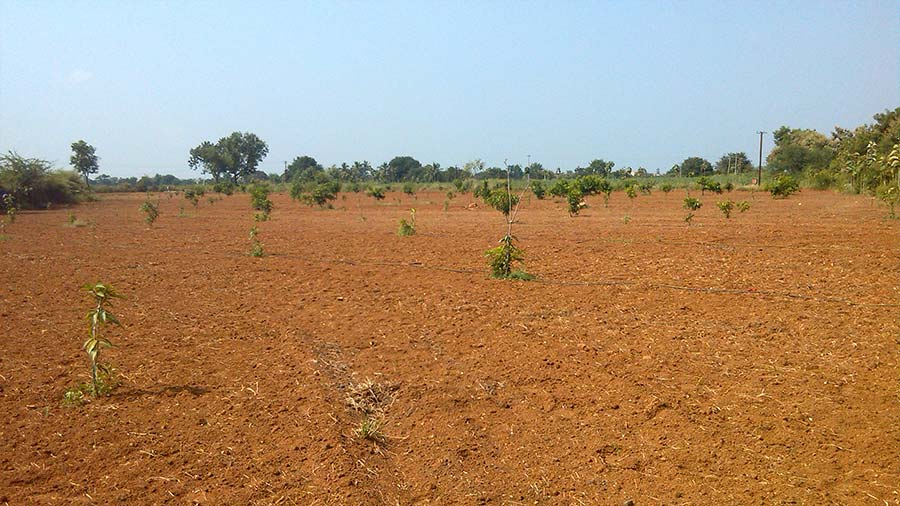 The study in Maharashtra documented self-reported benefits of Rs 3 for every rupee spent on horticultural works within just three years of completion and reported that six out of 10 trees planted survived, which compares favourably with many afforestation projects worldwide. 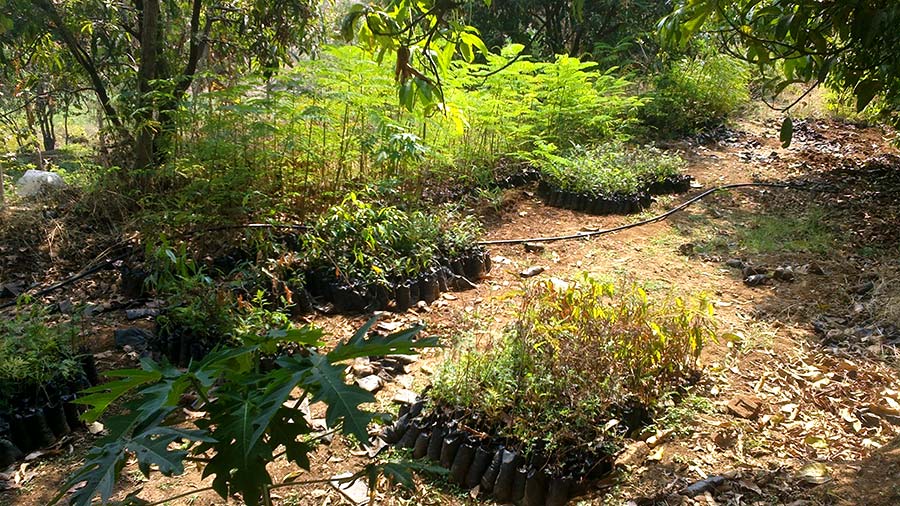 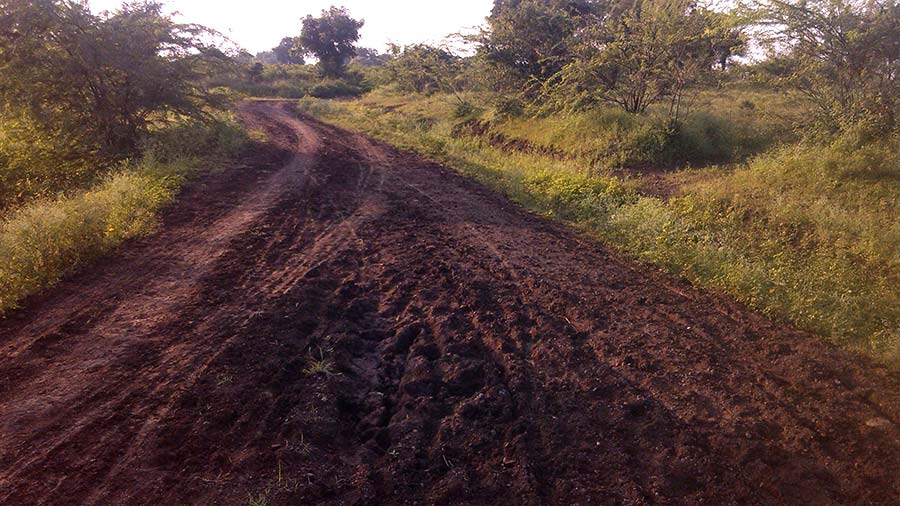 A farm road stands where there was none, to bring harvests out to the main road in Akola, Maharashtra
Photo credit: Sudha Narayanan

The primary purpose of roads built under the MGNREGA is to establish connections to places that were previously inaccessible, seasonally or otherwise. The difference such roads can make in lives of users is tremendous. The farm road in Akola pictured above has enabled farmers over a five kilometre stretch to take their harvests home on a vehicle or tractor, saving on time, costs and effort. Until then, they had to carry headloads with great difficulty.

In Nashik, where a hamlet was rendered virtually inaccessible from all directions but one by a steep slope that led to a river, that was their sole source of water. The path to the water was treacherous. The villagers turned the trail to a path using the MGNREGA. A farmer had come forward to offer his private land and the path from the hamlet cut right through his plot. This was not all. The villagers explained this was the first step. The plan was to eventually extend the path over the next couple of years, using the MGNREGA, to cut through to the location where the community could access public transport. This would cut short their travel time by half an hour.

In Raigad district of Maharashtra, things were different. Most of the Gram Panchayats in Roha block are well connected. But at the same time, villagers faced challenges getting from one place to another within the village. In Sarsoli, for example, the community secured a kaccha road under the MGNREGA that skirted a temple and led to the river, which was the main source of water. In another part of the village, the MGNREGA road, also kaccha, ensured that there was an easy and safe access to the cremation ground. For as long as the villagers could recall, the cremation ground was inaccessible, filled with scrub and thorny bushes. The community decided to use the MGNREGA to remove the scrub and level the ground around it to make it a safer place for funeral gatherings.

A chief criticism of MGNREGA works has been that they are not durable. Our research found that where the community has a role in choosing which assets to build, they tend to be maintained well. Several assets have lasted and are in good condition beyond a year. Around 45% of respondents found the present quality of assets to be quite good or excellent while another 44% found it to be acceptable. Although brick-and-mortar structures are most easily recognisable as durable assets, far more valuable to the lives and livelihoods of small holder farmers, pastoralists, forest dwellers, herders and fisher folk are restored and well maintained natural resources.

There are other assets that, in the words of a government functionary, are “not meant to be durable”. Among these are boribundhs, temporary structures of sandbags across rivers and streams to hold water temporarily. We found that women valued this work because it provided water pools where they could rinse their utensils and wash their clothes. Many structures like these also provided water for livestock, we were told. While there is scope for better design, the idea that MGNREGA assets are non-durable seems to be a generalisation, not fully supported by evidence.

The examples we have shared here are testimony to what can be achieved under the MGNREGA and what is possible. These examples challenge the view that the MGNREGA is all about “digging holes” and “filling them”. Through improved design of assets, careful selection of works and local involvement in planning, the MGNREGA offers an ideal platform to support agriculture and adapt to climate change.

A longer version of the photo essay can be found here. For more information and reports go here.