Contribute Now
Ad
On September 16, the Indian government banned the Nationalist Socialist Council of Nagaland (Khaplang) or NSCN(K) under the Unlawful Activities and Prevention Act for five years for its role in the June 4 ambush in Manipur which killed 18 Indian security personnel.

Since abrogating the cease-fire with the government of India on March 27, the NSCN(K) has repeatedly targeted Indian security forces, the latest being the showdown on September 12 in Nagaland’s Koki village on the India-Myanmar border.

That the ceasefire signed between the Indian government and the NSCN(K) in 2001 would eventually breakdown was predictable due to the Indian government’s growing concern that NSCN(K)’s Naga Self-Administered Zone in Myanmar was becoming a safe haven for armed groups like the anti-talk United Liberation Front of Asom faction led by Paresh Barua, the National Democratic Front of Bodoland led by IK Songbijit, and the Meitei armed groups like the People’s Liberation Army of Manipur.

The NSCN(K) was unhappy that its repeated demands for inclusion in the Naga peace talks between the NSCN (Isak-Muivah) and the Indian government had not been accepted.

The question that begs an answer is this: why was the NSCN(K) insistent that it be included in the peace process with the Indian government?

This has much to do with its claim to represent the eastern Nagas, historically sidelined by western Naga tribes like the Aos and the Tangkhuls, the latter dominating the rank and file of the NSCN(IM).

In fact, the genesis of the NSCN split in 1988 into the NSCN(IM) and NSCN(K) was the perceived mistreatment of the eastern Nagas by the western ones. The Nagas in Myanmar are economically the weakest, as are the Indian eastern Nagas this side of the border.

NSCN(K) also realises that it is very unlikely to get a respectable political deal for the minuscule Naga ethnic community in Myanmar. So then, why is the NSCN(K) not fighting the Myanmar government but is combative in India for the Naga cause, in spite of much larger Naga-claimed lands in Myanmar as compared to India?

The answer lies in Myanmar politics. The truth of the matter is that when the NSCN(K) signed a "bilateral ceasefire" agreement in 2012 with the Myanmar government, it resolved not to join in any political talks for the Naga areas with the Myanmar government. The NSCN(K) has also not taken up arms against the Tatmadaw (the Burmese military) for an independent "Nagalim" in Myanmar, though it does have such territorial demands there. In exchange it was allowed to keep its armed camps in the newly created Naga Self-Administered Zone in Myanmar governed by a retired Naga military officer of the Tatmadaw. 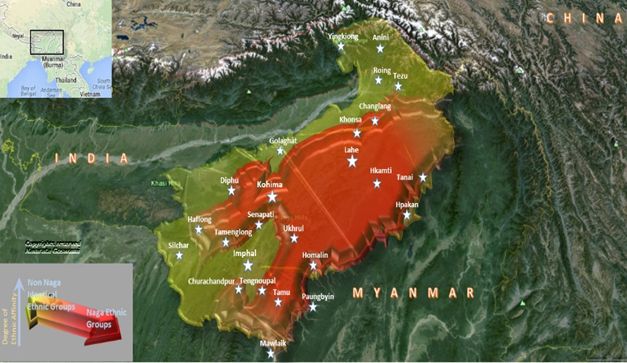 Figure I: Map of Nagalim
Source and Copyright: Namrata Goswami, 2015

In other words, the Myanmar Nagas are committed to give no trouble to the Myanmar government and to fully support whatever political decisions are unilaterally made by the government for the Nagas in Myanmar.

For instance, when the Myanmar government arbitrarily redrew the administrative units of the Sagaing division, six Naga inhabited townships – Tamu, Molaik, Phouwnpin, Homalin, Khamti, and Tanai – were lost to Sagaing division and Kachin state. Only Layshi, Lahe and Namyung (or NSAZ) were left to the Nagas to form the Autonomous District Council. At that time, Khaplang did not raise much of a protest against this arbitrary redrawing of territory by the Myanmar government.

It is thus evident from the NSCN(K)'s actions that they are prepared to make a massive compromise of Naga territory and political rights in Myanmar. In return, the NSCN(K) obtained safe sanctuary, while waging war against India, which makes perfect sense from a tactical military perspective of not fighting two powerful enemies together. It realised that it would get squeezed if India and Myanmar came together against it. That this is the strategy of the NSCN(K) is further evident from their renewed discussions with the Myanmar government under a National ceasefire peace process underway in that country to be signed by all ethnic insurgent groups next month.

There have been reports of internal dissensions within the NSCN(K) in arriving at a "consensus" at the discussions underway now with Myanmar government under the aegis of the Myanmar Peace Centre. Interestingly, the NSCN(K) is anxiously negotiating for protection from the Myanmar government against attacks from "foreign country", meaning Indian military operations against the NSCN(K) along the Indo-Myanmar border. And not surprisingly, there are zero discussions about the future of the Naga areas in these discussions, which far exceed the Indian one in size in Myanmar.

The Myanmar government too has not shown any visionary foresight in discussing political autonomy with any of the 18 ethnic insurgent groups, being more focused on a ceasefire to freeze the humongous ethnic issues in Myanmar. This is the perfect recipe for greater disaster and ethnic strife in Myanmar if these pressing issues are not earnestly addressed in the near future. So the NSCN(K), being a much smaller stakeholder in Myanmar, is just playing along with the rest of the herd, which leaves it free to train its guns in Indian Naga areas.

What can India do about it?

Militarily purging the NSCN(K) might suppress its activities in India as a short term, stop-gap measure. That said, the key to the pacification of the NSCN(K) lies with the Naga people themselves, so that it agrees to be peacefully included in discussions on the Indo-Naga peace accord. To this effect, the Naga Mother’s Association has made efforts to reach out to the NSCN (K), as have the Naga Hoho and other Naga civil society bodies.

Instead of a blanket ban on the NSCN(K), the government of India must strictly check the outfit's military operations while allowing total freedom to the Naga people to engage politically across the Indo-Myanmar border. That is the only viable road forward for India to protect itself from the fallout of the political myopia being practiced in Myanmar.