Contribute Now
Ad
The driveway of Bittu Singh's refurbished mansion in Patna has a cowshed on one side and three SUVs on the other. The arrangement is not uncommon among Bihar’s landed elite which has moved to the cities but remains rooted in a rural way of life. Overwhelming upper caste, this elite has prospered in the last ten years with Nitish Kumar at the helm of the state. Yet, as Bihar goes to elections, it has emerged as Kumar’s biggest opponent and the most vociferous supporter of the Bharatiya Janata Party.

Take Singh, whose formal name is Ritesh Ranjan Singh. A Rajput by caste, until last year, he was a general secretary in Kumar's Janata Dal (United). In December 2014, however, he left and joined the BJP, hoping to contest elections for the party from the Fatuha constituency. This month, when the candidate lists were announced, Singh's name was missing. Despite his disappointment, he maintained he had no option but to switch sides. "When the majority of my community feels a certain way,” he said, “how can I ignore it and go in another direction?"

It is true that across Bihar the upper castes – Bhumihars, Rajputs, Brahmins – are speaking in one voice.

“Everyone likes Nitish Kumar as the chief minister,” said Ravishankar, a researcher in Patna, a Bhumihar by caste, “but look who is batting for him.”

“People would have voted for Nitishji because he has done good work,” said Krishna Nandan, a 22-year-old Rajput from Gobindchak village in Chhapra, “but how could he go with the man whose jungle raj he opposed?”

“If he had contested the election alone, people would have rallied behind him like the Azad Hind fauj,” said Jay Kumar Jha, a Brahmin from Madhubani.

The common refrain is that Kumar is a good leader who has picked the wrong side – a reference to his alliance partner, Lalu Prasad Yadav. The chief of the Rashtriya Janata Dal, Yadav had risen to power in the nineties by challenging the supremacy of the upper castes and consolidating the votes of the lower castes through the politics of izzat  ‒ respect. Yadav’s 15-year-rule disproportionately favoured his caste men at the cost of others, and Kumar, from the backward Kurmi caste, eventually defeated him with the support of the BJP in 2005.

Kumar’s newly elected government initially focussed its energies on controlling crime and rebuilding the state’s abysmal roads. A good road network was essential for kickstarting economic growth. But getting projects off the ground was not easy – local contractors lacked the minimum capacity required to qualify for tenders, and contractors from other states were not keen to bid. Eventually, the government decided to groom local businessmen, giving them road contracts on a nomination basis, bypassing the tendering process.

Singh was one of them. Until then, he ran a business of installing mobile towers, but with experience of building roads, soon he was also constructing apartment buildings. Construction led Bihar’s double-digit economic growth and Patna became a boomtown. “Businesses grew by at least 300% in the last ten years,” said Singh, reluctant to share figures of his company’s turnover.

Who profitted the most? Who got the majority of government contracts? "Humi logon ko mila (We only got it)," he chortled. By "we", he meant the upper castes, primarily Bhumihars and Rajputs. Compared to the Lalu years, when Yadavs cornered contracts, in the Nitish years, he said, contracts were given on “merit”.

Nand Kishore Yadav, now the leader of opposition from the BJP, who was the road construction minister under Kumar for several years, defended the distribution of contracts. "Jisko rochi hai wahin lega (Only those who are interested will take them)," he said. He claimed the government did not discriminate but it was natural that the contracts would go to “those sections of society that have ponji (capital)”. 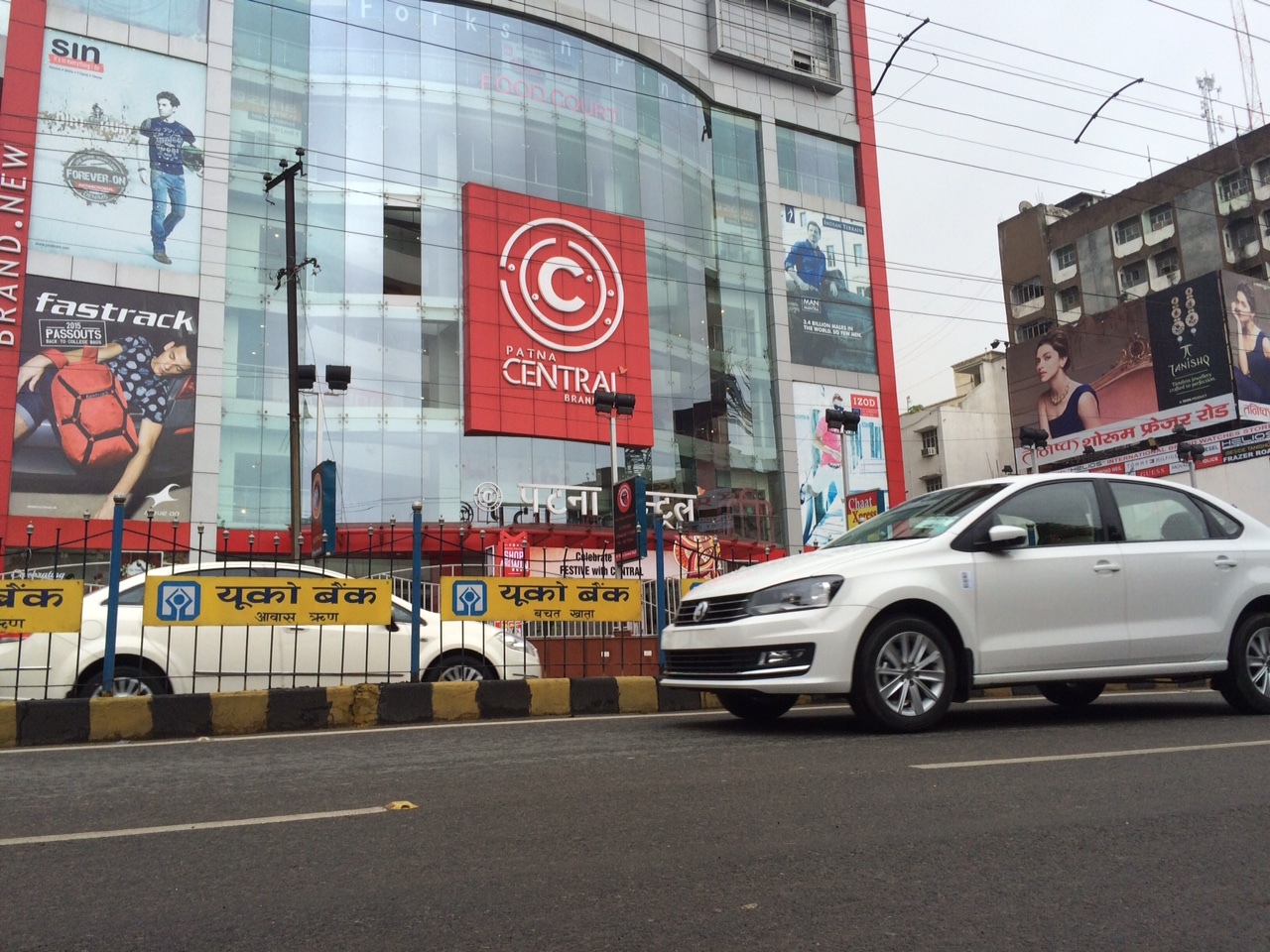 Patna has sprouted malls and multiplexes over the last decade.

It was a tightrope walk for Nitish Kumar. Even as he announced welfare schemes for Dalits, backward castes and Pasmanda (backward) Muslims, he was careful to balance things out, said a journalist. He gave prime positions to upper-caste bureaucrats, which included the appointment of RK Singh, now a mercurial BJP MP, as the road secretary. As long as the upper castes gained economically under his government, Kumar assumed they would not resent his calibrated attempts to expand his social base among Dalits and the backward castes. His own caste, the Kurmis, were numerically insignificant compared to the Yadavs, and Kumar hoped to win over a large section of the non-Yadav, non-Kurmi OBCs, who are categorised as extremely backward castes, or EBCs, in Bihar.

In the 2010 elections, it seemed this approach was working – Kumar won a massive mandate. With the BJP as an ally, he had stitched together what pundits called “a coalition of extremes”: upper castes, extremely backward castes, Mahadalits and Pasmanda Muslims.

But after he parted ways with the BJP in 2013, the social base began to slip. The upper castes left the ship.

This isn’t surprising. Once loyal to the Congress, the upper castes took to the BJP in a big way in the 1990s after the rise of OBC politics. “They had no space in Mandal, so they chose Kamandal,” said Abhishek, a professional psephologist who is advising candidates in Bihar in the election. “Kumar was acceptable to them because he is a soft face, but Lalu isn’t.” 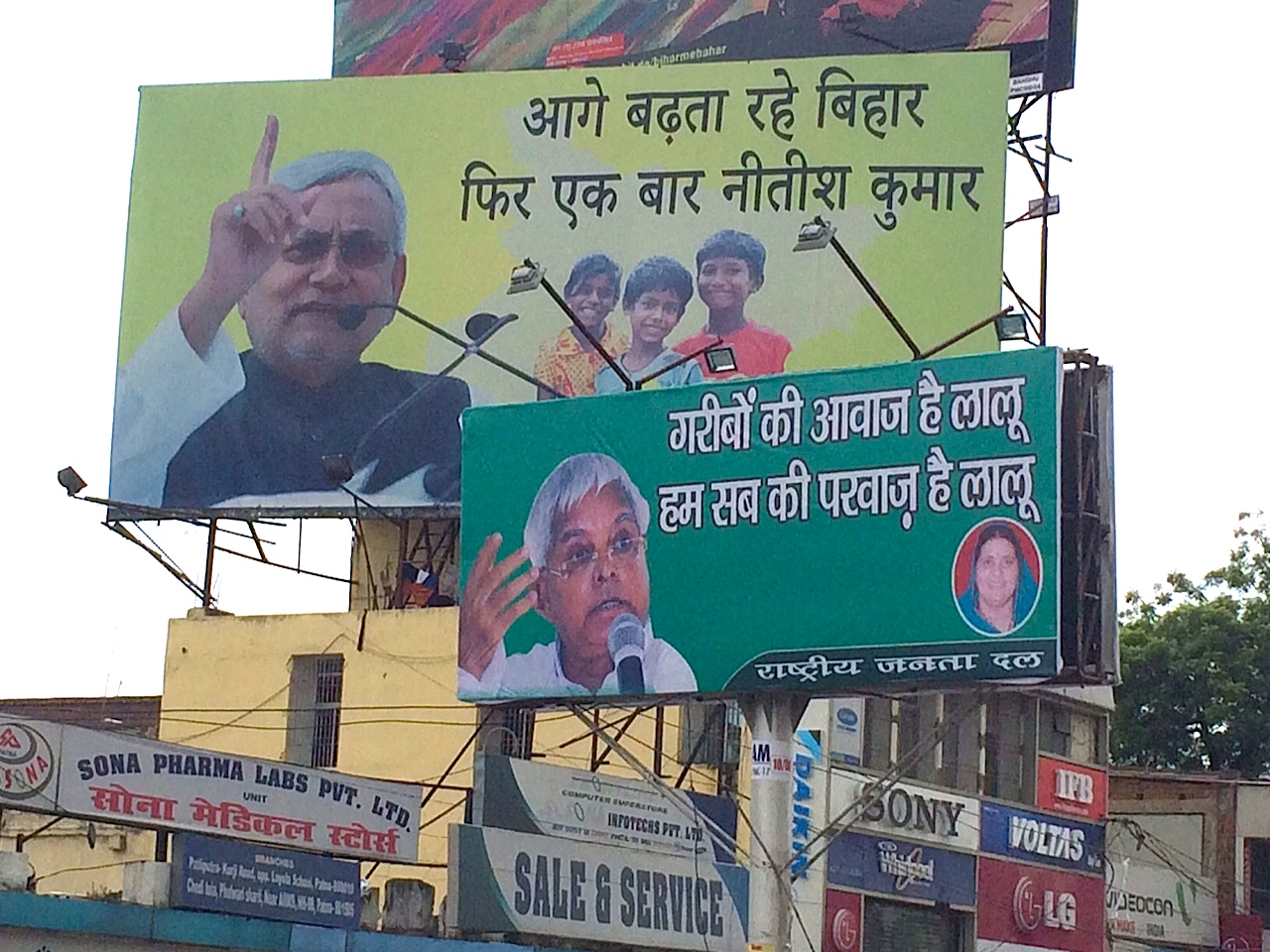 After being on the opposite side of the political fence, Lalu and Nitish are in the same camp, albeit with different slogans.

Shaibal Gupta, the founder of the Asian Development Research Institute in Patna, however, argues that the departure of the upper castes from the Nitish camp began much before his formal breakup with the BJP. In 2006, his government reserved 20% of panchayat seats for the extremely backward castes. Once the upper castes absorbed the implications of the move, and realised that Kumar “had broken the lower centre of power,” they revolted, said Gupta.

“Unlike the Bhadralok of Bengal, the upper caste elite of Bihar is not delinked from land and the village," he explained. "It cares a lot about its standing in the power structure of the village. The financial boom is not good enough if its power in the village is threatened.”

Arguably, if panchayat reservations for the extremely backward castes served to alienate the upper-caste vote, it should have assured Kumar of the support of these marginalised groups. But that didn't quite happened. In the districts of Muzzafarpur, Samastipur and Madhubani, areas where the extremely backward castes have a sizeable population, there were discordant voices among caste groups categorised as EBCs. While some people said they supported Kumar, others claimed they were voting for BJP. Several others kept their silence, either because they haven't made up their minds, or because they were unwilling to antagonise the powerful social groups that have already picked sides.

Why couldn't Kumar win over the support of the extremely backward castes despite his overtures to them?

For one, the EBCs are fragmented and far from homogenous. Annexure-I, the official list of groups categorised as extremely backward castes, runs into more than a hundred caste names. The fragmentation does not allow for the formation of a consolidated social identity.

Jiten Thakur, a carpenter by profession, and a member of the JD (U) in Madhubani district, claimed that people from the extremely backward castes were voting for Kumar, but could neither list the castes which fell in that category, nor detail the specific measures adopted by the government for their welfare.

In theory, panchayat reservations make for better redistributive justice, but on the ground their impact is less tangible than the social welfare schemes run for the Mahadalits, which have created a measure of support for Kumar, as a previous story reported. 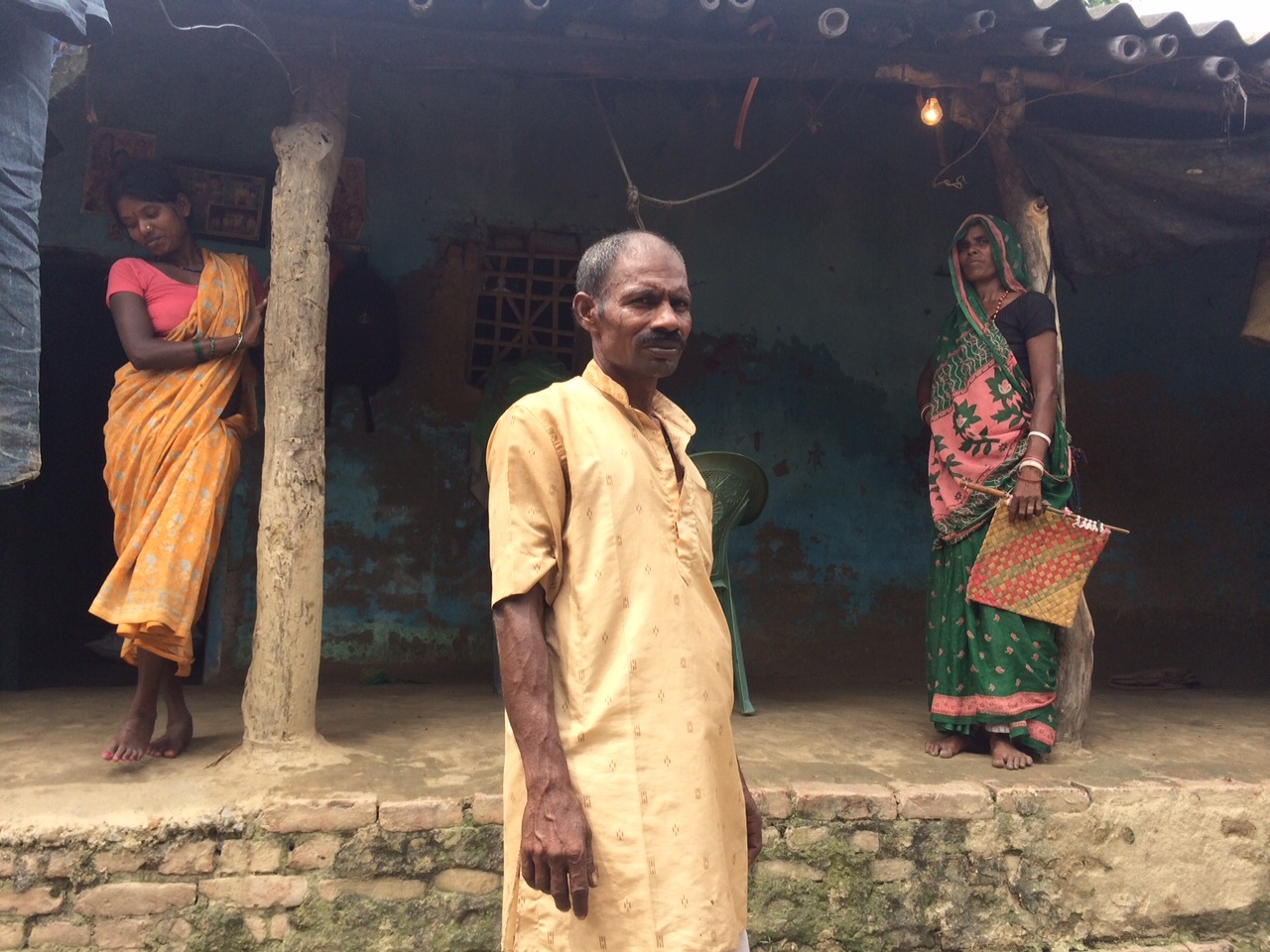 The Sadays, who are Mahadalits, said they would vote for Nitish Kumar because the government gave them a free electricity connection, among other things.

Among the extremely backward castes, the largest and most organised groups are Nishads and Dhanuks. While Dhanuks identify with the Kurmis, the caste that Kumar belongs to, a section of the Nishads, also known as Kewats, has been drifting towards the BJP.

A legislator from the Nishad community, who is officially with the JD (U), and did not wish to be named, said this was because Kumar had denied them important positions in the government and the BJP had given them more tickets. “In the Lok Sabha election last year, JD (U) gave just three tickets to EBCs while BJP gave five, of which two candidates won,” he said.

The reservation for EBCs in panchayats was ineffective, he claimed, since it created “mukhiyas without merit”. Explaining this, he said that earlier candidates from the Nishad community would win on their own steam, but after the reservation was introduced, the upper castes would prop up candidates from the weaker EBC groups, who would undercut the stronger EBC candidates, and win with upper caste support. “These mukhiyas would sit outside the homes of the Rajputs and do ji sir ji sir,” he said. “They did not represent the interests of EBCs.”

An advisor to Nitish Kumar admitted that the JD (U) failed to make political capital among the extremely backward castes because of its organisational weakness. “You need political structure and the resources to carry groups together to convert support into votes,” he said. “He [Nitish Kumar] depended on the cadre-based structure of the BJP, and when he broke from the party, it left a huge gap.”

“Nitish Kumar became the face of the government on the strength of our workers,” boasted Nand Kishore Yadav, the BJP leader. “It is not easy to build a cadre of your own.” 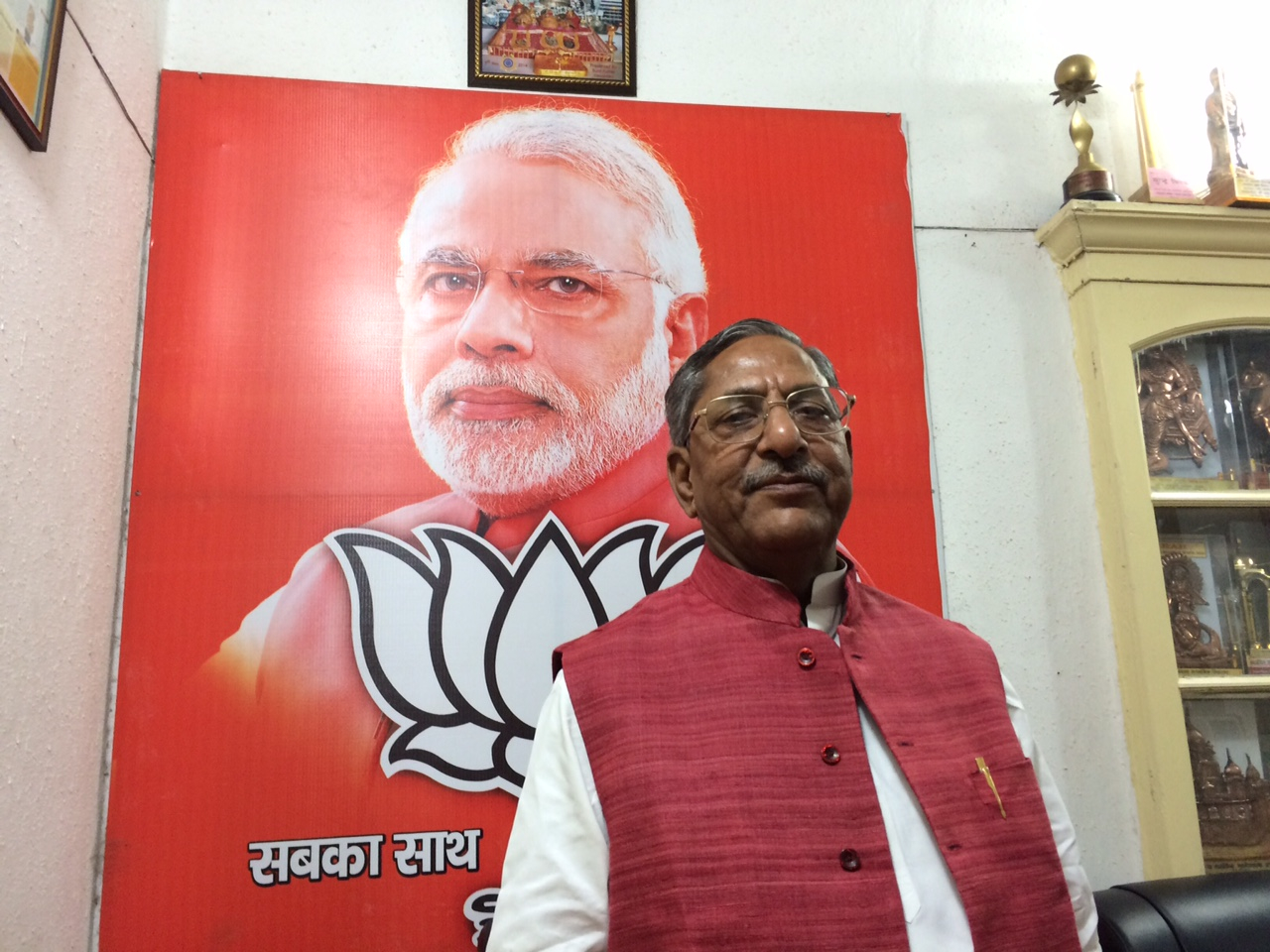 Despite backward caste leaders like Nand Kishore Yadav, BJP is seen as an upper caste party in Bihar.

That explains why Kumar fell back on Lalu Prasad Yadav, his long-time political adversary. Despite his recent losses, the RJD leader retains a strong support base among the Yadavs. Like the Bhumihars and Rajputs, the Yadavs are considered aggressive mobilisers. "Yeh wo jaat hai jo na sirf vote daalta hai vote dalwata bhi hai. These caste groups not only vote but also influence the votes of others," said a journalist. In an election being fought on sharpened caste lines, the BJP-led National Democratic Alliance is propelled by the upper castes, with allies hoping to secure the votes of select caste groups among Dalits and backward castes. The RJD-JD (U) alliance, meanwhile, is banking on a backward caste consolidation, with support from Muslims.

Lalu Prasad Yadav has been blunt in his exhortations to the lower castes. At a large political rally in Patna in the last week of August, taking on Narendra Modi’s jibe of ‘Jungle Raj-II’, Yadav described a possible future government with Kumar as ‘Mandal Raj-II’. On Sunday, he was even more explicit: "This is a war between the backwards and forwards," he reportedly said at a rally in Raghopur.

In contrast, Kumar’s campaign has stuck to the theme of governance. As chief minister, Kumar cultivated the image of a development-oriented statesman. Invoking Bihari sub-nationalism by celebrating a birthday for Bihar, among other things, he tried to create a constituency for himself that cut across caste lines.

Yet, in his own subtle way, Kumar has responded to what one of his advisors termed "the betrayal of the upper castes". In June this year, with elections on the horizon, Kumar reserved 50% of all government contracts up to Rs 15 lakh for Dalits, OBCs and EBCs.

This may well be the tragedy of this election: Regardless of who wins, the idea that a leader can transcend caste in Bihar already stands defeated.