Contribute Now
Ad
Haider Rizvi was a Pakistani journalist and activist who passed away in Lahore on October 29. His three-decade-long journalistic career began in Pakistan. He moved to the US in the mid-1990s and covered the United Nations, before returning to Pakistan in 2013 and taking up a job as a lecturer. He was 52.

The ironies of life had their fun with Haider Rizvi and he laughed right back at them. This most gentle and secular of humanists was beaten up as a college student in Lahore, in General Zia-ul-Haq’s Pakistan, in the 1980s for his fiercely progressive politics.

Two decades later, he was assaulted in post-9/11 New York. This time his crime was being Pakistani and a Muslim – identities that he shrugged off. The second beating contained the further irony that Haider had been reporting on the hate crimes after the September 11 attacks. Now, he became the story.

“Are you from Pakistan? Are you Muslim?” asked the men who accosted him. Anyone with a modicum of self-preservation would have given a short, if false, answer and escaped. But not Haider. His explanation about being an atheist from the Indus Valley and his love for all people meant nothing to those men. They beat him, knocking out a front tooth and leaving him unconscious.

“He was so angry about his tooth, but more devastated that his brown brothers [his assailants were Hispanic] did not see the parallels between white America’s treatment of Latinos and their treatment of him,” said Helen Linda, his librarian friend from Vermont. “Even during pain and crisis, he was always a brother to all people and had such incredible insight into the human condition.”

Haider could have milked the incident to garner sympathy. But when the editor of an Indian publication asked him to write a personal essay about being a Muslim in America, he asked her whether she would like a piece on “what it’s like being an atheist living in the United States”.

Sometime after the attack, Haider shaved off his trademark beard, but the incident did nothing to reduce his cheerful self-destructiveness. He did, however, soften his views over the years: he accepted, for instance, the human need for prayer, but praying to “mother nature” was as far as he could go.

Haider’s political consciousness developed as a student during the pro-democracy, anti-martial law struggle of the early 1980s. “For him, that struggle never ended,” said journalist Saqlain Imam.

Farrukh Sohail Goindi, an activist and writer from Lahore, recalled a 14-year-old Haider when they were both members of the Children’s People’s Party in Sargodha. Haider had written a poem about Zulfikar Ali Bhutto, Pakistan’s prime minister who was hanged in 1979 by the Zia regime. In his booming voice, Haider recited that poem to Goindi just three days before he died on October 29.

In the late ’80s or early ’90s, Haider and I went together for a procession welcoming former Prime Minister Benazir Bhutto to Lahore. There were a massive crowd and a heady atmosphere full of music, slogans, laughter and excitement. It spelled the promise of freedom and democracy after 11 long years of military rule.

Like many others, I was “jigar” to Haider – his favourite term of endearment, meaning comrade (the Urdu/Punjabi word literally means liver, associated with courage).

Haider was “like a brother” to Turkish journalist Ozlem Sahin Sakar, the bureau chief of the state-run Anadolu Agency, who shared an office with him at the United Nations between 2006 and 2011. He called her comrade and jigar as well.

Haider was the real jigar – passionate and courageous. As Sakar says, he was someone who “always believed in the youth, always optimistic about life and the future despite all the difficulties”.

His difficulties included often not having money to pay the rent. Friends would help him out at these times and had him stay at their homes, but his self-destructiveness would push them to the limit.

This wild streak would remind many people of Haider’s close friend, the late journalist Zafaryab Ahmed. Both were brilliant, humanist, pluralist, secular, unfettered minds and souls who rose above religious, nationalist and ethnic prejudices and stereotypes. Perhaps their recklessness stemmed from being unable to handle the injustices of society, compounded by decades of repression under military rule.

Those who share these values and continue to fight oppression get “broken from inside”, as radio journalist Murtaza Solangi says.

Haider dismissed friends’ suggestions to get help. He was too intelligent not to know that alcoholism is curable and that there are ways to deal with depression without harming yourself. He also knew that his extreme behaviour pushed people away, and he never held that against them.

None of this takes anything away from Haider’s brilliance as a journalist. Starting out in the mid-1980s, working for short stints at The Nation (he resigned instead of leaving the journalists’ union as the editor demanded) in Lahore, The Muslim in Islamabad, The Frontier Post in Peshawar, and Dawn in Karachi.

In 1993, he began freelancing for Inter Press Service, a wire service based in Rome. He continued writing for IPS after moving to New York with his then wife, activist Sameena Nazir. He was stationed at the UN headquarters, reporting for IPS till 2012, refusing to limit himself to Pakistan or South Asia.

Paying tribute to Haider after his death, Thalif Deen, UN bureau chief for IPS, wrote: “Haider’s writings faithfully reflected the causes he fought for. He passionately advocated the rights of African-Americans, Hispanic minorities and native Americans in the US and indigenous people in Latin America; highlighted student protests in the US; advocated the Palestinian’s right to statehood; battled for the eradication of hunger and poverty in the developing world; joined the global campaign for nuclear disarmament; and covered the Occupy Wall Street protests (which for him also meant ‘Un-Occupy Palestine’)."

After losing his office space at the UN – where he would sleep overnight when he couldn’t cough up the rent – Haider flew to Nepal at the end of 2011 to do some reporting. He wanted to write about climate change – the melting glaciers in the Himalayas and its impact on the economic and social conditions of the working people of Nepal and Pakistan.

In Kathmandu on a US passport, he also planned to get a visa for Pakistan for his first visit after two decades. However, Pakistan’s behind-the-scenes bureaucratic-security establishment wall, sources told us, blocked the visa. Haider had no papers to prove his Pakistani origin, having lost his Pakistani passport and identity card years ago in New York. Many influential journalists and political leaders tried to help, but all efforts were stymied because, sources said, the intelligence agencies had “files” on him.

More ironies. The Pakistani establishment was suspicious of Haider’s borderless politics and Indian connections, even though he was equally critical of India’s human rights abuses. A Nepali editor told him, “No job for a Pakistani. Sorry. If you were an Indian, we would give you a job.”

Running out of money, he was in dire straits in Nepal for three months. His maverick behaviour could not have helped matters. Eventually, friends in New York paid for his air ticket back to the US.

Painfully, Nepal was so near and yet so far from Pakistan. “It was an extremely emotional moment for me when the plane from Kathmandu was flying above our Sindh last Tuesday.” Haider wrote in a long email to me while heading back to New York in January 2012. “I wanted to jump out of the plane so see my PAF [Pakistan Air Force] school in Korangi air base and the Press Club in Karachi, where I had so many joyful evenings with friends and colleagues.”

Back in the US, Haider eventually obtained a Pakistani visa. After an initial visit, he decided to return and work there. In a message to me, he wondered how he “would be able to deal with this complex society after 21 years of absence”.

He spent a semester teaching at the mass communication department at Karakoram International University in Gilgit. He loved living there, loved teaching, and loved his students. In March 2015, he informed me that he had joined Punjab University as a lecturer.

At the end of April, he was hospitalised in Lahore after the counter-weight of a traffic barrier broke his right leg. A four-hour surgery ended with a contraption that Haider hated – heavy metal rings clamped into the flesh.

For some months, Haider had been staying at the home of journalist Shafqatullah. Now, Imran Bajwa, another journalist, took Haider to stay at one of his offices. He reasoned that someone would always be around during the day, while a caretaker who lived on the premises would be around at night. A glass partition in one of the rooms marked Haider’s sleeping space from the living area.

More ironies. It was the caretaker who found Haider early that morning. The glass partition was shattered, perhaps hit by Haider’s walking stick as he got up in the middle of the night. A two-inch cut on an artery in Haider’s heel had bled excessively.

When the cast was removed on September 23, Haider had shared a photo of himself triumphantly holding it aloft like a trophy, displaying the drawings on it by his old friend Feica, the veteran political cartoonist.

On October 28, five months after the accident, Haider walked without support for the first time. Using his walking stick, he headed to a nearby park on his own, bought a dozen red roses to thank Imran Bajwa for looking after him, called friends to come over and celebrate his return to health.

And then came the final irony. Just as things were starting to go right for him, an accident ended his life that night.

Haider’s love for poetry, painting, and photography were flowering and maturing. He was teaching and he loved it. He had found a soul mate who cared for him. He was happy to finally able to walk on his own.

Haider was an egalitarian, beautiful soul, full of love for all life, humans, animals, plants.

“A whirling dervish,” was journalist Saqlain Imam’s description of Haider in a moving note. “If God ever decided to send him to heaven for his love to humanity, he would refuse it because most of this poverty-stricken humanity would be in hell for their petty crimes to fill their stomachs.”

In their last conversation, Saqlain told him, “I’ve never met anyone truer than you and more resilient than you!”

Haider replied: “Don’t tell anyone. They become jealous. Keep it in your heart.”

I can now imagine Haider chiding his friends for grieving over his departure, including those who avoided him or had distanced themselves but never stopped caring for him, as he well knew.

“I love you all, it’s going to be okay, my brothers and sisters, comrades. We will win,” I can hear him say in his booming voice with his wide smile, arms outstretched in that characteristic gimme-a-hug pose.

Are you at peace now, jigar? 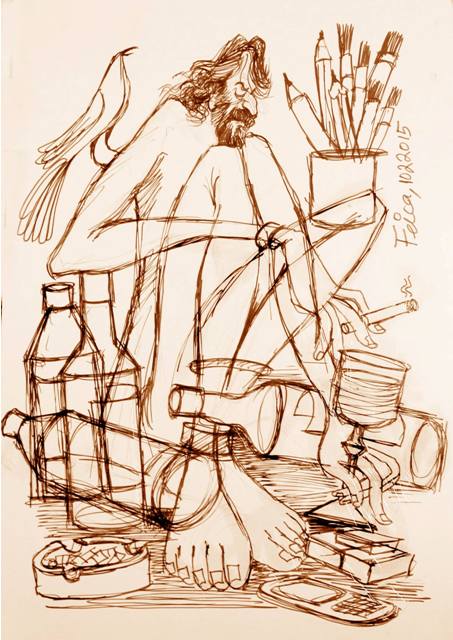