Become a Member
Ad
Amendments to the Mental Health Care Bill were approved by the cabinet on Thursday, in an attempt to protect the rights of people suffering from mental illness. But experts have criticised its provisions relating to suicide, even though the proposed legislation claims to decriminalise the action. Unless the Indian Penal Code is also changed, they say, people who attempt to take their own lives can still be prosecuted.

“At the end of the day, suicide will still be a crime,” said Amba Salelkar, a lawyer and disability and mental health rights activist. “If suicide were truly being decriminalised, legislators would have removed it from the IPC itself.”

The bill will be tabled in the Lok Sabha in the budget session in February. The original draft of the bill was filed in the Rajya Sabha in August 2013. A parliamentary committee on health and family welfare submitted their review of changes to the union cabinet.

At present, attempting to kill oneself is illegal under section 309 of the Indian Penal Code, and can be punished by a year in prison. The Mental Health Care Bill says that notwithstanding the IPC, anyone attempting suicide “shall be presumed...to have severe stress at the time of attempting suicide and shall not be liable to prosecution and punishment."

It goes on to state that it is the government’s responsibility to help ensure that those who have survived a suicide bid do not attempt it again. This clear puts all those who attempt suicide under the health care provisions of the bill, one clause of which includes the right of the government to incarcerate people of unsound mind for up to three months against their will.

By retaining IPC legislation and classifying suicide as a mental illness, the bill effectively gives the government the right to incarcerate anyone in a mental institution if suspected of having attempted suicide, experts say.

“If suicide were truly being decriminalised, legislators would have removed it from the IPC itself,” said Salelkar. “At the end of the day, suicide will still be a crime. This is what makes me uncomfortable about the bill.”

Dr Bhargavi Davar, another mental health activist, added that the decision to cite the cause of suicide as “severe stress” is dangerous because it allows a much larger range of people to be classified as mentally ill. “Mental illness is defined so broadly, any person is liable to be brought under the bill,” she said. “Who in urban areas is not stressed? Will they also be deemed mentally ill?”

She said that the earlier draft of the bill left open the option for people had attempted suicide but did not have any official diagnosis of mental illness to go to court to prevent themselves from being incarcerated in a mental institution. “How do you prove to the court that someone is not stressed?” she asked.

Both Davar and Salelkar believe that the solution would be to change the IPC, and not mention suicide in the Mental Health Care Bill at all.

Most psychiatrists agree that criminalising suicide is illogical. According to them, the law has never served as a deterrent to people wanting to take their own lives. The rate of suicides in India has steadily risen in the past five years. 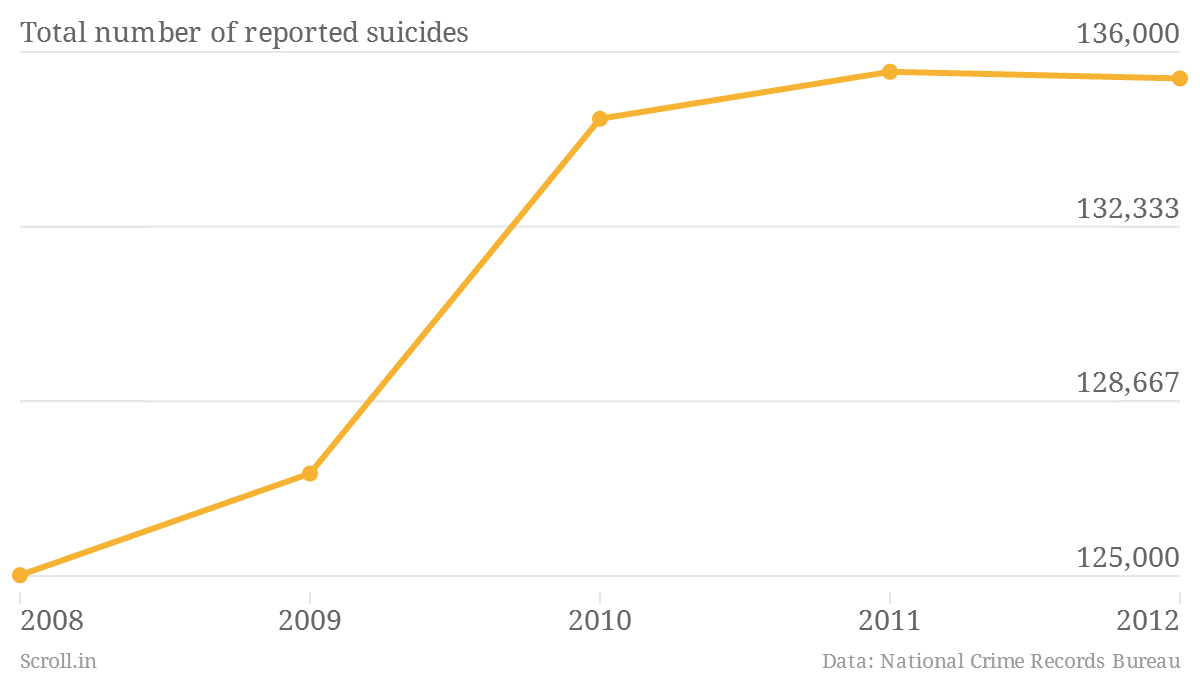 “It is a good move to decriminalise suicide,” said Dr NN Raju, secretary of the Indian Psychiatric Society. “Suicide is a move taken to end suffering. They think it is the only option left to them. Society has an obligation to help them out, rather than labelling them as criminals.”

Dr Kedarnand Banerjee of the National Institute of Behavioural Sciences concurred. “Suicidal people are least bothered about legislation,” he said. “When the thought comes, it comes. Thinking about the law never stopped anyone from attempting suicide.”

While they welcomed the apparent decriminalisation of suicide, they too were not pleased with its being described as a mental illness.

Labelling suicide as a mental illness is inaccurate, according to Raju. “While severe stress doesn’t necessarily cause suicide, calling somebody mentally ill is not correct either,” he said. “Someone who tries to commit suicide may need the help of mental health professionals, certainly, but trying to commit suicide is not necessarily the result of inherent mental instability.”

The top five specified occupations of those who committed suicide from 2001 to 2012 included housewives, farmers, those in private service, the unemployed and self-employed. These constitute 54 per cent of a total of 1.4 million people who killed themselves during this decade. 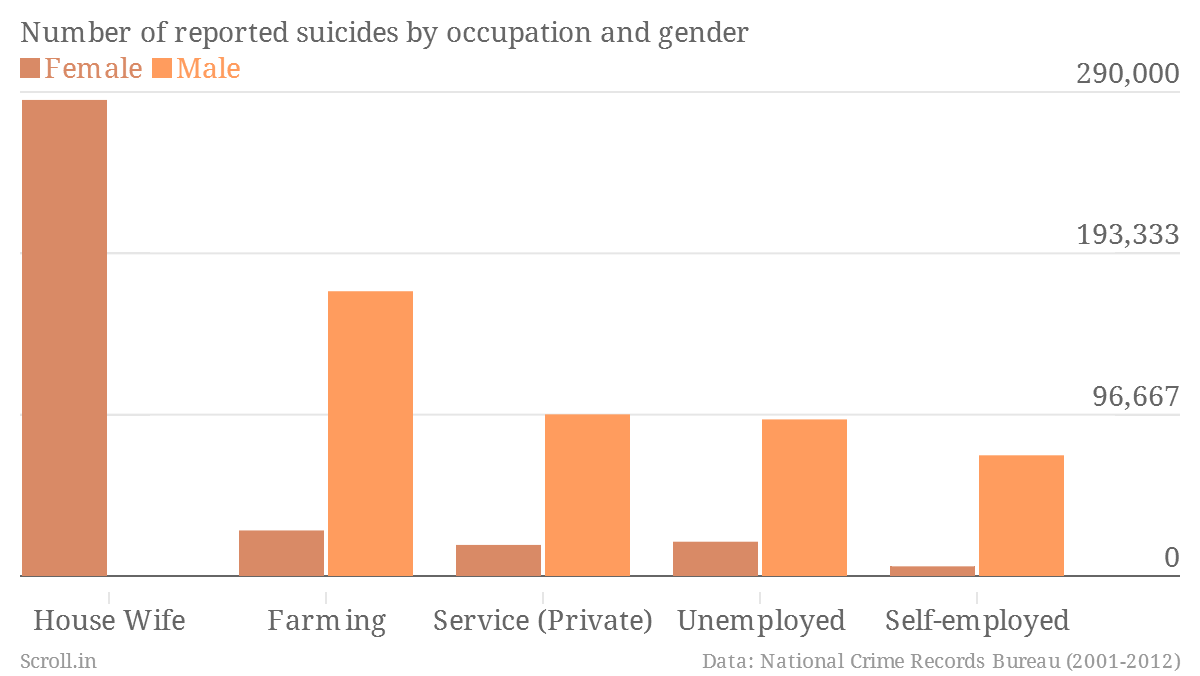 “It is necessary to understand that suicide is not an event,” said Johnson Thomas, who works with Mumbai-based suicide helpline Aasra. “It is not a one-time process. People go through different stages of stress and when it comes to a head, that is when they commit suicide.” Thomas, however, believes that the bill will be useful as it will force the government to take the responsibility of therapy after a failed suicide attempt, which is their stated intention.

Dangers of the bill

The social and political consequences of including suicide in the Mental Health Care Bill extend beyond just wrongful incarceration if the person survives, according to Salelkar. For instance, if a housewife were to survive a suicide attempt, they will be classified as mentally unstable and could have custody of their children taken away from them under the Juvenile Justice Act.

There are also cases in which pressure from in-laws for dowry is a pressing cause of women committing suicide. “When the case comes to trial, because she is deemed to be mentally ill, her evidence could become shaky,” said Salelkar. “Even if she doesn’t survive, the fact that suicide is filed under the Mental Health Care Act means that the family that might have abetted the suicide has some more room to wiggle out of being convicted.”

Political acts of protest are also likely to be prosecuted as before. Irom Sharmila has been on a hunger strike for ten years now. Each year, she is released from hospital custody for one day, then re-arrested under section 309 of the IPC. The government can choose to argue that Sharmila is not under severe stress. Since suicide has not been decriminalised, the government will not be obliged to release her from custody.

With this misguided attempt to help suicide survivors, experts say, the government has instead laid the ground open for them to be persecuted further.