Contribute Now
Ad
India's Mars Orbiter, which is poised to slip into orbit around the red planet on Wednesday, is the world's lowest-budget mission to the red planet. With this, the Indian Space and Research Organisation is keeping unusual company with entrepreneurs around the world seeking to make space exploration a more viable proposition.

“The idea of space exploration on a budget isn’t entirely new,” said Dr Susmita Mohanty, CEO of Earth2Orbit, a private Indian aerospace company. “Other than countries like India, private entrepreneurs in the US are also rewriting space economics. The two camps are worlds apart, with different motivations but the same outcomes: affordability, accessibility, flexibility and speed.”

ISRO has spent Rs 450 crore on this project. An equivalent mission by the US National Aeronautical Space Administration could cost up to ten times as much. For instance, NASA's Mars Atmosphere and Volatile Evolution probe, which took off 13 days after India's Mars Orbiter Mission cost approximately Rs 4,166 crore at current exchange rates. Ironically, it was considered to be one of NASA's thriftier missions.

M Annadurai, project director of MOM, attributed this to ISRO’s emphasis on using technologies it had already tested on other projects. “Our mission designed itself,” he said in an earlier interview to Scroll.in. “INSAT had already developed certain technology for Chandrayaan [ISRO’s lunar orbiter, launched in 2008]. Since we were reusing that, we had a low development cost. We also wasted less time testing these components since we already knew what their limitations were.”

The MOM, launched from Sriharikota on November 5,  hurtleed towards its destination at 32 kilometres per second. At that speed, it could travel from Kanyakumari to Kashmir in 100 seconds.

Its goal is to gather photographic and atmospheric data from around the planet and transmit this back to Earth.

“How to do more with less is an art form Indians specialise in," Mohanty said. "Other than frugal engineering, reasons for the low price tag are: (1) Two thirds of the parts for both the probe and the rocket were made indigenously, and (2) ISRO engineers and scientists’ salaries are nowhere close to what their international counterparts get paid at, say, NASA or ESA [European Space Agency]."

Annadurai freely admitted to both suggestions. “Our people thought of this as a matter of national pride,” he said. “Where normally people work for eight hours in a day, the MOM team voluntarily put in 16-18 hours daily, for no extra pay. At one point, they even stayed here 24/7.”

That, he said, is how they managed to complete the mission in record time. While the prime minister sanctioned the project only in August 2012, ISRO’s team began working on it two months earlier. They took care only to work on generic parts that could be reused in other projects if MOM was not approved.

There are three critical stages for any mission to reach a deep space object. The first, and often most difficult, is to launch the rocket. Once that has been accomplished, the rocket needs to achieve enough momentum to escape Earth’s orbit at exactly the right moment, or it will join other space debris trapped in circling the planet. Finally, once the vehicle is in space, it has to reach its target at the correct velocity to be able to drop into orbit around it.

There is a narrow period once every 26 months when it is possible to launch a rocket to Mars. Prior calculations showed that this would be in November 2013. The team had to begin working early if they were to meet the deadline. Their first test launch took place in September 2012.

“While we can conduct all manner of tests here, we cannot predict how our probes will react in deep space conditions,” said Annadurai. “But we learnt from our experience with Chandrayaan, so we can say we are as prepared as we can be with the MOM.”

NASA's MAVEN has already overtaken MOM despite having taken off later. This is because it used a more powerful rocket to catapult it beyond Earth’s orbit. ISRO is following an older and better-tested method called the Hohmann transfer orbit. This calculates the precise elliptical route a spaceship must follow if it is to travel from one orbiting body to another, as pictured below. 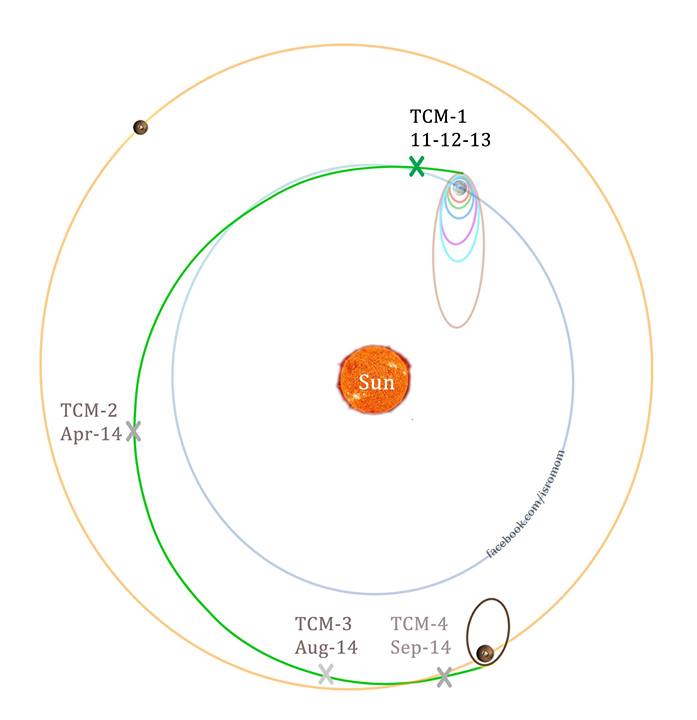 (For an interactive visualisation of MOM and MAVEN’s trajectories, click here.)

In simple terms, all ISRO did was to whirl the Mars Orbiter around Earth six times before flinging it into space towards its destination. Anybody who has ever failed to use a slingshot can imagine the number of ways this could go wrong.

Earth and Mars orbit the sun in the same direction but at different speeds. They come close enough to each other for a launch to be feasible only once every 26 months. If a mission does not launch within this period, the team would have to wait over two years to try again. If anything, down to the angle and velocity of the launch, is miscalculated, the aspiring orbiter might miss its target altogether and be consigned to orbiting the sun instead.

This is apart from everything that could go wrong with any probe exposed to the extreme temperatures and solar radiation of deep space.

“Though other people are launching their probes in a different way, their success rate is much less,” Annadurai noted. “We feel predominantly that the chance of miscalculating is higher for them.”

Only 16 of 41 missions to Mars have succeeded – a little over a third. The now-defunct USSR first attempted to reach Mars in 1960 with two probes, Korabi 4 and 5. Neither of them managed to reach Earth’s orbit. The USSR was, however, the first country to place a lander on Mars in 1971.

Seven of eight missions launched since 2001 have successfully reached Mars. The one failure was a joint venture between Russia and China in 2011 that was unable to escape Earth’s gravity.

MOM has been breaking all ISRO records since December 2, when it crossed the orbit of the moon. If the MOM is successful in locking into orbit around Mars today, it will join four other such probes docked on or around the planet.

ISRO has calculated that once Mars Orbiter reaches Mars, it will be able to conduct its observations for around six months before it runs out of power. The orbiter is carrying a camera and atmospheric sensors. The Chandrayaan, which has similar equipment, was able to confirm last year that there were signs of water on the moon.

Unlike private entrepreneurs, the space organisation has no plans as yet to monetise its potential deep space capacity for independent scientists and observers.

But just reaching Mars "will be a huge achievement for any space programme”, said Annadurai.