Contribute Now
Ad
In the 1920s and ’30s, a sprawling Victorian-Gothic bungalow named Gulshan Mahal on Mumbai's Peddar Road would draw the cream of society to its musical soirées and cultural gatherings. It was home to India’s first female documentary filmmaker, who would later be turned out of it as a Partition evacuee and see her bungalow confiscated by the Indian government. Eighty years later, this bungalow in the Films Division campus on Peddar Road is set to open its doors to culture once again, as the National Museum of Indian Cinema.

This is the first museum dedicated to films in India. Through movie clips, photographs, film equipment and other film memorabilia, it will take visitors through the history of cinema from across the country. But the history of Gulshan Mahal – both before and after Partition – is itself an intriguing tale.

The bungalow, formerly named Gulshan Abad (garden of prosperity), was built in the mid-1800s and first owned by Peerbhoy Khalakdina, a Gujarati businessman from the Khoja Muslim community. The house, where he lived with his wife and son, Jairazbhoy Peerbhoy, was nestled in the midst of a wooded five-acre property between posh Peddar Road and Warden Road, overlooking the Arabian Sea.

The Khalakdinas were among the many Khoja families who moved to the city from Kutch at the request of the Aga Khan, their religious head. Besides trading, Peerbhoy was also a philanthropist and educationist who had set up many schools in Kutch, and he continued to do so in the city.

Over the years, Peerbhoy’s large estate passed down to his younger grandson, Cassim Ali Jairazbhoy. When Cassim Ali married Burma-born Khurshid Rajabally in the early 1900s, Gulshan Mahal acquired a new character. “For one, Amma [Khurshid] changed the entrance of the house from Warden Road to Peddar Road, so that people could get a view of the Arabian Sea when they entered,” said Amy Catlin-Jairazbhoy, a musicologist and wife of Khurshid and Cassim Ali’s son, the late Nazir Ali Jairazbhoy.

Khurshid also brought music into the house. She had a sitar guru, Madhav Lal from Mathura, who lived on the estate and also taught Nazir Ali, who went on to become a well-respected musicologist and a documentary filmmaker. Khurshid’s brother, Yakub Rajabally, was a well-known qawwali artiste who would perform around the city and at Gulshan Mahal. “In those days, my mother-in-law hosted a lot of mehfils and qawwalis at the bungalow,” said Catlin-Jairazbhoy. 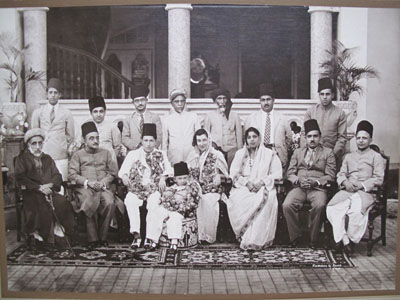 (A 1930s photo of the Jairazbhoy family outside Gulshan Mahal, courtesy Amy Catlin-Jairazbhoy. Khurshid sits in a white sari on the right.)

In 1932, as a pilgrim in Mecca, Khurshid began filming scenes from the Haj pilgrimage and made a documentary film – the first Indian woman to do so. “Cassim Ali had written many books on Islam and used the film to teach people about the religion during educational tours around Europe,” said Catlin-Jairazbhoy.

Through the 1930s, the family also rented one of the houses on their estate to Devika Rani, the legendary actress who starred in films like Achyut Kanya (1936) and co-founded Bombay Talkies with her first husband, actor-producer Himanshu Rai. That house is now the Films Division’s children’s films building.

In 1950, more than a decade after Cassim Ali’s death, everything changed for the Jairazbhoy family. Around three years after Partition, when Khurshid was on a visit to the new nation of Pakistan and all her sons were studying or working abroad, the Indian government confiscated Gulshan Mahal and its surrounding properties, declaring it as evacuee property.

“Amma rushed back to Bombay but she had been declared an evacuee, and she had to sell all her belongings and return to Pakistan,” said Catlin-Jairazbhoy. After Partition, Khurshid could only visit India on a restricted visa till she died in 1989, while the rest of the family scattered in different parts of the country and abroad.

Gulshan Mahal, meanwhile, was put to different uses by the government: for a while, it served as a hospital for soldiers; later, it was a temporary campus for Jai Hind College; briefly, it also held the offices of the Documentary Films of India and the Films Division. When the Films Division moved to a new building on the estate in 1976, Gulshan Mahal remained largely closed, and was rented out for film shoots on occasion. Munnabhai MBBS was among the films shot there.

“Now this wonderful heritage bungalow will house India’s first cinema museum, where people can recall and re-enact the history of films the country,” said Amrit Gangar, curator of the museum. Gangar emphasises that the museum has a scope wider than just Bollywood. “This museum will have a national character, focusing on regional cinema and the role films played in the freedom movement,” he said.