Contribute Now
Ad
Even as the Food and Agriculture Organisation warns of a global famine in 50 years, Indian scientists have already begun to experiment with an alternative source of protein: insects.

“We are now doing a lot of work on edible insects,” said Arup Kumar Hazarika, a professor at Cotton College in Guwahati who has just concluded an initial study on the insect diet of the Bodo tribe in Assam. “We are studying aspects like the chemical composition, micro and macronutrients, the kinds of insects eaten. We have also done a comparative analysis of all these species.”

The FAO is taking this very seriously. In a 2013 report, the FAO presents insects as a viable replacement for meat in the event of a food shortage over the next century because of their high nutritional value that can match that of other, more commonly consumed kinds of meat.

The report identifies parts of India as being among several places where insects are already a part of traditional diets. The practice seems to be limited to tribal regions in Assam and central India.

Bodos consume insects such as caterpillars, termites, grasshoppers, crickets and beetles every day, said Hazarika’s initial report. In fact, these insects can be considered a staple. They supply as much nutritional value in terms of proteins and vitamins even when preserved for later consumption. When Hazarika began his studies, his team identified 10 insect species commonly consumed by the Bodos. That number has now grown to 29.

The FAO report reiterates this and points to other cultures that incorporate insects into their diets. If cultivated on industrial scale, it says, insects could be far cheaper than other meat, and more environment-friendly, as they do not require as much nutritional input themselves.

The solution to this seemingly inevitable famine, the FAO thinks, is to establish large-scale insect farms and to begin to acclimatise people to the idea of eating insects. Although insects are nutritious enough for a healthy diet, people tend to be repulsed by the idea of eating them.

Insects are already a part of the traditional diets of around two billion people, the FAO said. Most of these people do not live in western countries.

Most insectivores rely on caterpillars and then move on to consuming other less fleshy insects. 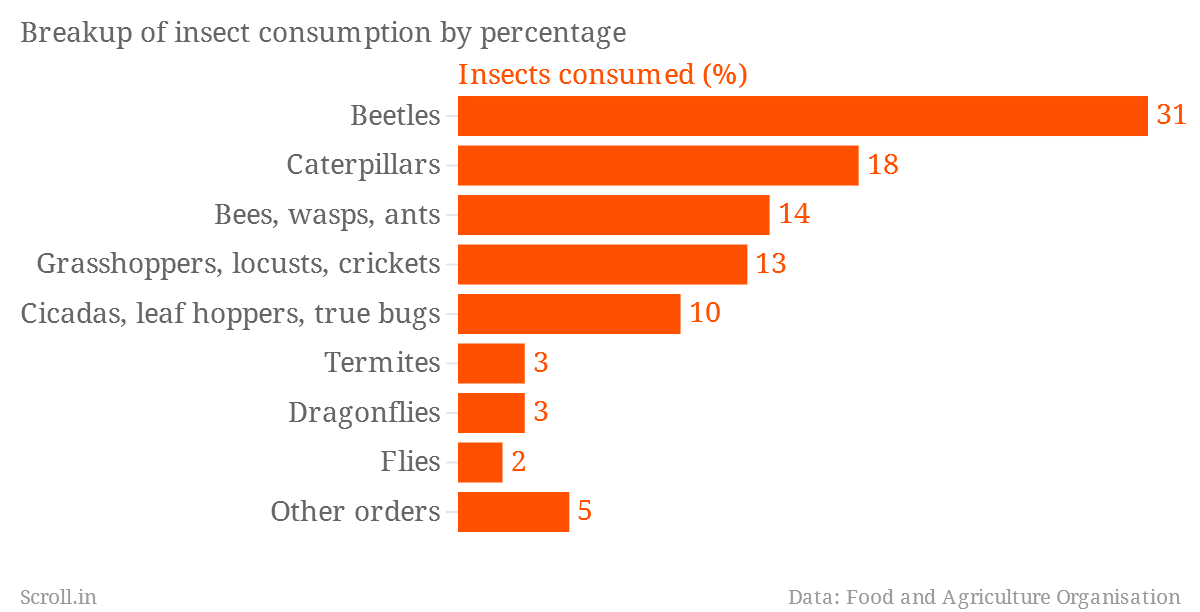 Eating insects is no big deal for those already used to it. “Ordinarily insects are not used as emergency food during shortages, but as a planned part of the diet throughout the year or when seasonally available,” said Hazarika’s report. “The edible insects have been reported to have more nutritional content than the other conventional foods.”

He continued, the “Bodos generally eat insects after drying them in the sun. They do not have much inhibition about insects. It is an age-old tradition for them.”

However, in the rest of the country, those who want to consume insect meat might find it difficult to integrate into their daily diets because it is not easily available.

Efforts are underway to remedy this. The Central Sericultural Research and Training Institute of Mysore has been experimenting with converting leftover silkworm pupae into food. The centre is in the final stages of patenting their processing formulae. The patents should arrive by the end of this month.

“We made salty and sweet preservations and sent a modest amount to the North East to test them,” said Kanika Trivedy, a scientist at the centre who has been working on processing pupae so they do not go to waste. “The salty version was more popular. We even made a spicy pickle out of the pupae, but the Naga people did not like it because they use different spices to pickle it.”

Trivedy, who is herself a vegetarian, says that people on her team report that the pupae recipes taste like prawns.

“Larvae are very nutritious,” she added. “Some of them have 50-60 per cent protein, which is very good for health. We make oils for massage, powders and food preparations. I don’t think this will be very popular in India because we are mostly vegetarian. But in certain tribal areas, perhaps.”

The Madhya Pradesh Silk Federation has been selling canned silkworm pupae for general consumption since 1946. Right now people don’t buy this because it is not popularised,” said Ravindra Singh, a scientist at the federation. “Once it becomes readily available, people will definitely begin to buy it.”

He added, “Only people from the North East buy our products. Continental hotels might use them for novelty, but regular customers are not interested.”

However, some believe that India’s long-established caste taboos may derail these experiments. Chandra Bhan Prasad, a Dalit economist, said that insect eating was often a matter of necessity for non-tribals. “However nutritious insects might be, the fact is that Dalits ate them out of compulsion,” he said. “If you ask them to go back to eating just that, they will tell you to go to hell.”

Prasad openly doubts whether people of other castes will adopt the practice either. “People of the social and cultural strata of Arundhati Roy might openly eat millets, a food associated with Dalits,” he said. “It becomes a fashion statement for them. But generally, the upper middle-class, or the AAP kind of people, will not want to be associated with any Dalit marker.”

He wasn’t optimistic about insect consumption becoming popular. “When people start dying of starvation, people of any caste will eat whatever is available,” Prasad said. “If there are other options, people will not accept anything that has a low social marker, whether this is in India or anywhere else in the world.”

Is climate change making our dal and roti less nutritious?