Contribute Now
Ad
Air India fired 12 cabin crew members last week for either arriving hours late to their flights or refusing to fly. In February, the national airline warned its employees that it would take action against those who arrived late and thus delayed flights.

“We are just following ordinary process and procedure,” said GP Rao, deputy general manager of customer care. He refused to speak about why these 12 were fired.

“We don’t comment on the process,” he said. “A lot of passengers were affected,” he added. “Should we let them be? They will suffer, Air India will suffer, people will stop flying with us.”

“These people were randomly picked of the 500 people who said they would not fly because of inadequate rest periods,” said a member of the association, on condition of anonymity. “If somebody has been late, you cannot just sack a person. This is nothing beyond an attempt to intimidate them.” The Air India management has forbidden employees from speaking about these layoffs in public.

Cabin crew and management officials alike attribute Air India's consistent loss-making to inefficiency. But each believes that the other is to blame for the situation. Air India, which is estimated to record losses of Rs 3,900 crores in the current financial year, is ranked second to last in the number of delayed domestic flights in May 2013, the latest period for which data are available. Information released by the Directorate General of Civil Aviation shows that 10.8 per cent of Air India flights were delayed, compared to 5 per cent of top-ranking IndiGo. It occupied the same position in the number of cancelled flights that month at 0.7 per cent, compared to IndiGo’s 0.1 per cent.

The airline has not enjoyed a good working relation with its crew of late. Employees have gone on strike several times since Air India merged with the other national carrier, Indian Airlines, in 2011.

Members of the cabin crew claimed that their tardiness, which is the rationale for the latest sackings, is actually due to poor scheduling. They say that they were being required to serve on flights during their officially stipulated rest period. “According to our 2008 agreement with Air India, we are entitled to rest double the number of hours we fly after our flight is done,” said the crew member. “If they send a transport 60 hours after a flight when I am entitled to 80 hours of rest, I won’t come. Of course, if there is an exigency, you need to tell me about it.”

Rao, the Air India deputy general manager, said, “We follow the DGCA norms. That is all.”

On January 27, the Bombay High Court refused to stay the implementation of Directorate General of Civil Aviation guidelines in Air India. These guidelines relate to health standards for flight attendants on all Indian airlines. But some Air India staff members have contended that the rules are unfair to older staff members.

In 2007, Star Alliance invited Air India to join its international consortium of airlines. The group includes Lufthansa and United. Air India began the integration process but had to pause in 2011 when it merged with Indian Airlines. Recent reports suggest that it might now join the alliance by this June. Partly because of this, the company has been scrambling to improve its services across the board.

According to DGCA data, Air India's employees have been highly underproductive for the last ten years. As shown in the chart below, crew members fly far less than the capacity of the airline. 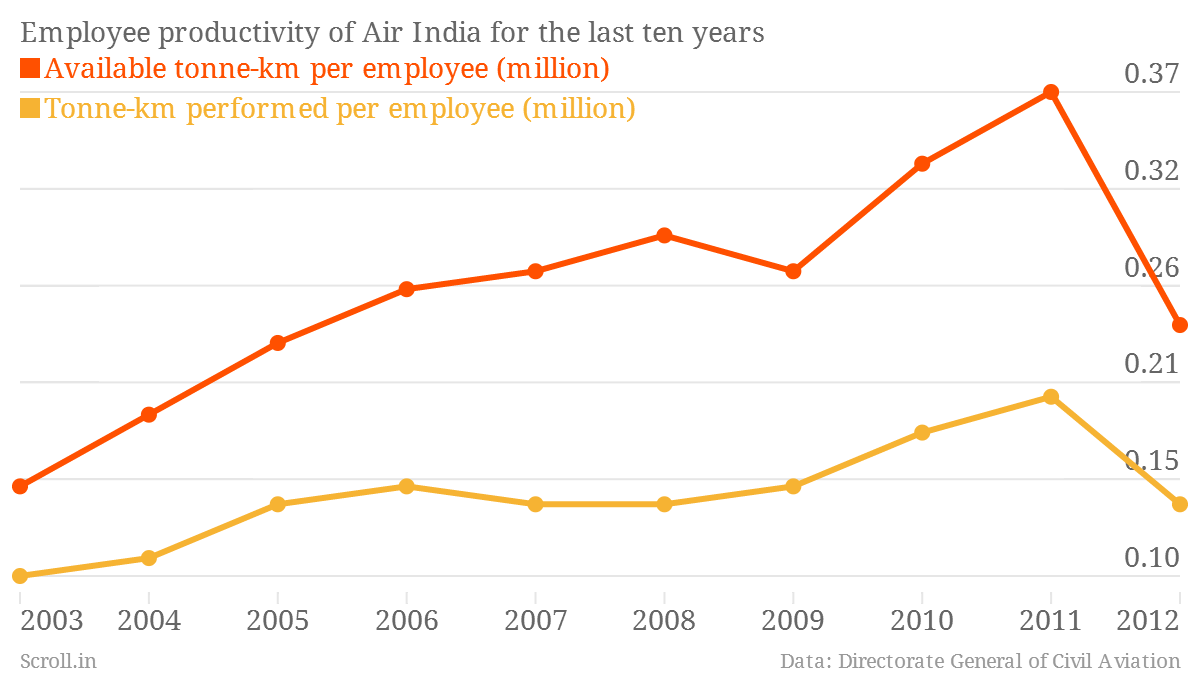 However, crew members claim that the scheduling department bears a lot of the blame for the situation.

According to one staff member, while some crew members are overbooked for flights, others are not given enough to do. “In the past few months, I have not flown more than 60 hours each month,” said the crew member. “This is not because I am not willing to fly, but because they are not assigning me to flights.”

But people close to management have another story to tell. “This is the most indisciplined, corrupt and feckless cabin crew in the world,” said a retired senior management official of Air India who wished to remain unnamed. “They have a long history of indiscipline.”

The solution, said Jitender Bhargava, a former executive director at Air India and author of The Descent of Air India, is to “have a culture of efficiency in the organisation. If your flight gets delayed for five hours because of engineering reason, are you taking action against the engineers? If the management has indeed decided to crack the whip, it must ensure that it is uniformly employed across the length and breadth of the organisation.”

At present, employees feel that the management is not listening to them. “If you want to change the bilateral agreements, sit with us across a table and tell us about it,” said the union member. “We have written 500 mails and letters to the management telling them about our problems, but they never replied. The mistrust is basically mutual.”