Contribute Subscribe
As Telangana stands poised to become India's 29th state, many fear that Maoists will use this period of political transition to make gains in the area. The banned organisation could look to tap into discontent that might arise among marginalised sections if the new administration belies their expectations of a better life.

The immediate trigger for worry was the killing of the sarpanch of Balapam village in Visakhapatnam district by Maoists on February 21. About 50 insurgents entered his village, hacked his neck in a signature beheading and left a note warning several others that they could be next. The sarpanch was once a sympathiser but the Maoists suspected he had become a police informant, said security forces. Although the village is not in Telangana, people worry that the region could again become a base for the insurgents.

"Initially, there could be skirmishes," said PSR Anjaneyulu, the Hyderabad-based inspector general in charge of the Greyhounds, an elite anti-insurgency force created by the Andhra Pradesh government in 1986 to fight Naxalites, as the Maoists are also known. "But the police is more than equipped to handle them."

Since 2005, after the state government initiated a crackdown, Maoist-related violence has been declining in Andhra Pradesh, which will be bifurcated to create the new state of Telangana. There was, however, a slight uptick of violence in 2013. (See table below.) Over the years, senior Maoists active in Telangana, once among their strongholds, have moved to other parts of the country. 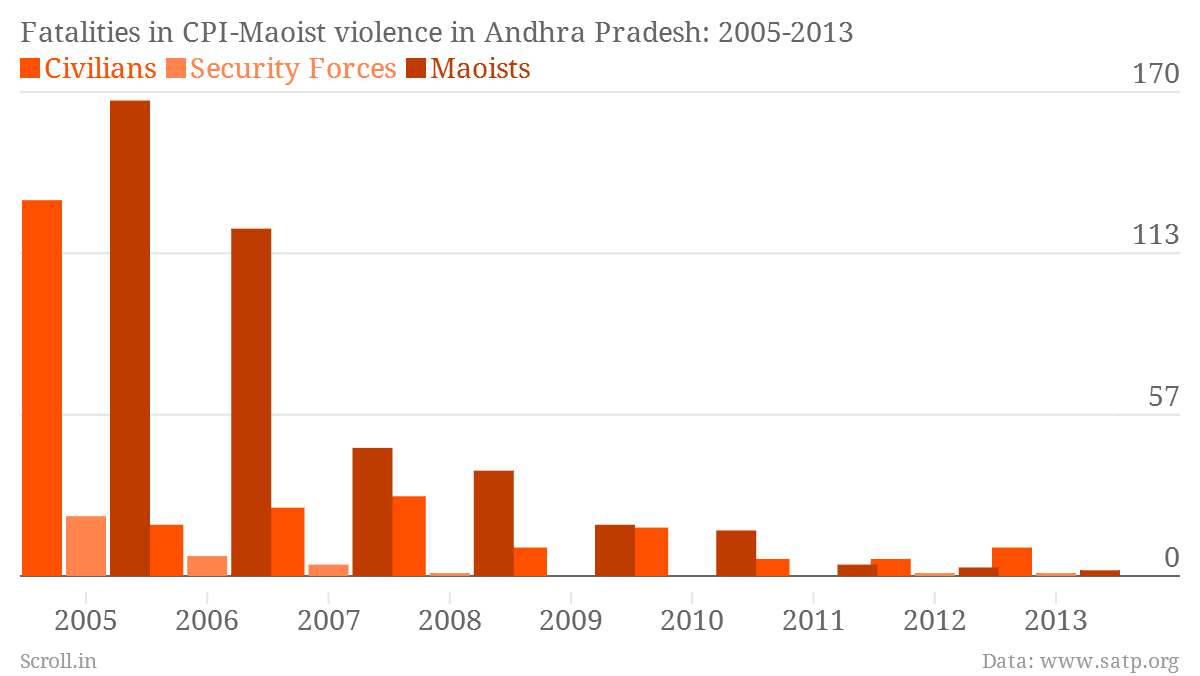 Even today, Maoists view a separate Telangana as an opportunity to engineer a re-entry into the region, according to a report of the insurgents' central committee meeting held in 2013 that was seized by security forces.

The Maoists control a huge swathe of Chhattisgarh, parts of Orissa and Bengal and pockets of Maharashtra, Bihar and Jharkhand, but they have no operational base in Telangana. What remains of the Naxalite movement in this region are sympathisers both in villages and towns, including intellectuals and civil rights activists who may provide whatever support they can under the existing laws. 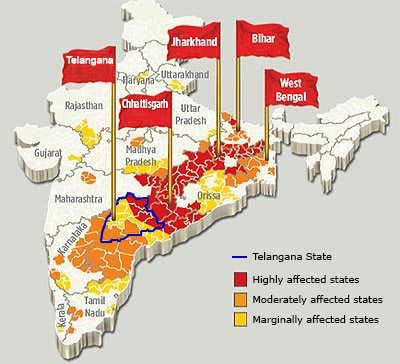 The once faction-ridden Naxalite movement operates under the unified command of the outlawed Communist Party of India (Maoist), many of whose current leaders are originally from Andhra Pradesh, and largely from Telangana. The head of the central committee, the highest policy-making body, Ganapathy, is from Telangana's Karimnagar districct. Ramanna, the chief of the Dandakaranya Special Zonal Committee, in charge of an area spanning Chhattisgarh, Maharashtra and Andhra Pradesh, hails from Warangal in Telangana.

Azad and Kishenji, senior members of the central committee whom security forces killed in Adilabad, Andhra Pradesh, and Midnapore, West Bengal, respectively, had connections to Telangana. Azad was born in Krishna district in coastal Andhra Pradesh, but studied in Warangal district, a hotbed of Naxalism in Telangana, while Kishenji was born in Karimnagar, another Maoist-dominated district in this region. Their real names, Cherukuri Rajkumar and Mallojula Koteswara Rao, respectively, reveal their origins.

Three factors are likely to determine what happens to Maoism in Telangana: the readiness of security forces to prevent and thwart attacks, policies taken by the new state and the attitude of its political parties.

On the question of countering attacks, the Telangana state will be well-equipped to do so, said security experts. Unlike other states where Maoists are active, the current state of Andhra Pradesh has a police force that has had training in conducting anti-insurgency operations, right down to the village level, said Anajaneyulu. Their intelligence-gathering networks are also strong.

As the New Delhi-based Institute of Conflict Management's South Asia Terrorism Portal notes, in 2010 the Maoists did attempt to regroup in the forests of central Andhra and in the Telangana region, but security forces arrested or killed their leaders, forcing them out of the state once again.

Moreover, unlike in the case of Chhattisgarh and Jharkhand, which had to set up new capitals when they were created out of older states, Hyderabad will remain the capital of Telangana. The new state is therefore likely to retain good officers in the administration and security forces, said Ajay Sahni, a counter-terrorism expert and executive director of the Institute for Conflict Management. "The best people will remain in Telangana because the perks and infrastructure in and around Hyderabad will be much better than anything that a new Seemandhra capital will have in the next two decades," he said.

The Maoists acknowledge that they have not been able to get new recruits for many years. As early as 2002, the Maoists had lamented that social and economic conditions had changed and were not conducive to recruiting. In a document seized by security forces they pointed out that "earlier, farmers never had anything to eat when they [went] to the market... Now they go to the hotels. They also have to watch the imperialist's TV. So they have to go by bus..."

While the capability to counter left-wing extremism may be in place, the new state's policies will also play a part in determining how amenable people in the Maoists' traditional strongholds will become to supporting the organisation's re-entry. The new state will have to take decisions on issues of development and investment. These could turn contentious and create the potential for Maoists to tap into the resulting discontent. Indeed, among the litany of complaints that the Maoists listed in the note they left after killing the sarpanch in February was the charge that he was preventing people from protesting against planned coffee plantations and bauxite mining in the area.

Varavara Rao, a veteran Maoist sympathiser and poet, who has been arrested three times for his links with the insurgents, said the law that had enabled the creation of the state had many flaws that could harm the interests of marginalised communities.

The bill passed by Parliament in February and signed into law by the President earlier this month gives considerable discretionary powers to the governor for the first decade during which Hyderabad is to be the joint capital of Telangana and Seemandhra, the name for the areas of coastal Andhra and Rayalaseema. The governor, who will oversee both states during this period, will be in charge of law and order and internal security. While he is to act on the advice of a council of ministers on other matters, he can override their suggestions.

Rao feared that this would open the door to a further transfer of land in the four districts around Hyderabad from farmers to businessmen. Already huge swathes of land in the area are controlled by politician-businessmen, such as the anti-Telangana Congress lawmaker Lagadapati Rajagopal, who gained notoriety last month by using pepper spray in the Lok Sabha to protest against the passage of the Telangana bill.

"If people don't fight, in ten years, more of this land will be lost to this class," said Varavara Rao. "So in some ways, the real struggle over issues linked to the development programme, will only start now.”

Gautam Pingle, a Hyderabad-based political economist and author of The Fall and Rise of Telangana, published last month, said the Maoists would find it difficult to make a comeback in the region. But he was also concerned about some of the Act's features. For instance, the borders have been redrawn so that more than 300 tribal villages in Bhadrachalam division of Khammam district that will be flooded by the Polavaram dam project will become part of Seemandhra. "If the villages had been part of Telangana, the project would not have been allowed to go ahead," he said. The Seemandhra administration, however, could force the decision through. This might create disaffection in the villages that will be submerged.

A third factor is the attitude of political parties. As the so-called "secret" chapter of the report submitted in 2010 by the Srikrishna Commission, set up to study the demand for statehood for Telangana, noted, "Maoists are also likely to gain by the creation of a new state, [which] is likely to be soft towards them initially, given that they have over the years supported the struggle for the creation of Telangana." Even though this chapter on law and order and internal security was initially classified, key portions became public.

Political parties competing to woo the left-wing extremists of Telangana is not new. For two decades, starting in the early 1980s, the Telugu Desam Party, dominated by the Kammas of coastal Andhra Pradesh, and the Congress, over which the Reddys of Rayalaseema held sway, both cozied up to the Naxalites to woo voters in the ten districts comprising Telangana, the third region of the state in which neither had a social constituency.

At that time, Telangana was an active locus of Naxalism. In Telangana, the insurgents could count on the support of villagers and the sympathy of a huge cross-section of intellectuals and creative people.

In 1982, NT Rama Rao, a leader of the Telugu Desam Party, hailed his state's Naxalites as "true patriots" who had been "misunderstood by the ruling classes". With the support that this endorsement won him in Telangana, the former film star came to power in 1983 with a massive majority.

The mainstream parties intermittently retracted and banned the People's War Group, the faction of the Naxalites active in Telangana, and in 2004, the state government, then ruled by the Congress's YS Rajashekhar Reddy, initiated peace talks with the insurgents. As a result, many Naxalites came overground. A year later, using this information, security forces began a crackdown of the movement in Telangana, successfully forcing most of the leadership to move to other parts of the country**

*** Correction to previous version:
- In paragraph 9, changes Azad's birthplace to Coastal Andhra Pradesh from Telangana, the location of his killing to Adilabad district in Telangana from West Bengal and the spelling of the first part of his name to Cherukuri from Cheruri.

We apologise for the errors.

Video: On Telangana's second anniversary, a look back at the movement that made it happen