Contribute Subscribe
Ad
In a country with 1.2 billion people living in 35 states and union territories, it’s hardly surprising to have six national political parties and 54 state parties. To some, it may even seem like a small number. But as the big parties work out their alliances before the 2014 general election, there are a whopping 1,593  "registered unrecognised parties" on the sidelines, hailing from every possible corner of India, listed with the Election Commission.

This gargantuan list represents hundreds of communities, causes and ideologies – there’s the All India Homeless People Congress, the Nari Shakti Party, the Consumer Party of India and even the National Tiger Party. Some have rather sublime names, like the Best Class Party, Life Peaceful Party and the Front of Revolutionised Creative Efforts. Here, we bring you a list of some curiously named parties that are also active online. 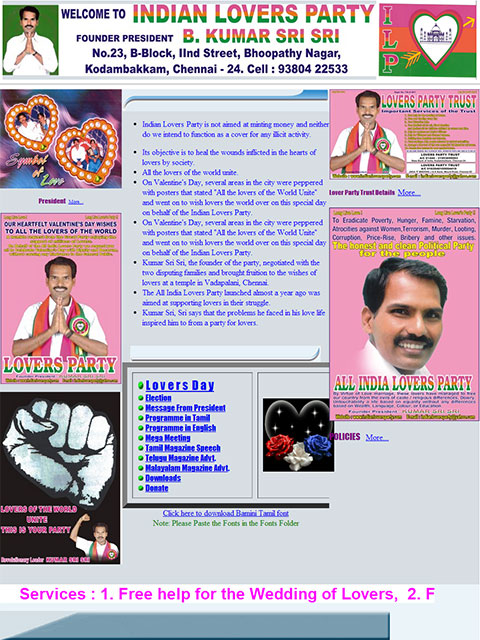 No, it’s not an invitation to an evening of scandalous revelry. This Chennai-based party, with the Taj Mahal at the heart of its symbol and the colour pink splattered across its posters, claims its objective is “to heal the wounds inflicted in the hearts of lovers by society”. The founder, B Kumar Sri Sri, celebrates lovers who, “by virtue of love marriage”, are freeing the country from the evils of caste, dowry and untouchability.

A 15-year-old party from Andhra Pradesh, this one has deep spiritual ambitions: the website claims the party was formed to “transform all the People of India into mediators, enlightened persons, vegetarians and peace loving people”. In the 1999 Lok Sabha election, the party fielded candidates from 50 constituencies, and claims to have doubled this number in the 2004 and 2009 elections. 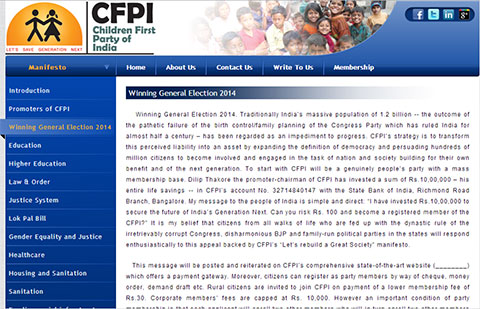 The name of the party makes sense when you consider that it was founded by Dilip Thakore, a Bangalore-based publisher and editor of Education World, an education news magazine. In a year, the party has enlisted more than 400 members and has an extensive manifesto online that aims to empower the next generation of Indians.

The party is just six months old, and its founder, Sanjeet Lal, seems very clear about the party’s objectives: “Neither Communal-ism nor caste-ism, neither state-ism nor regional-ism, neither language-ism nor difference-ism, only National-ism, Indian-ism, One-ism are our voice”, says the website.

As the name suggests, GAP was formed as a reaction to the Aam Aadmi Party. The founders were active participants in Anna Hazare’s anti-corruption movement but claim to have been disillusioned by the way in which the movement fizzled out when Arvind Kejriwal took centre stage. The party claims to fight for true equality between the rich and the poor. 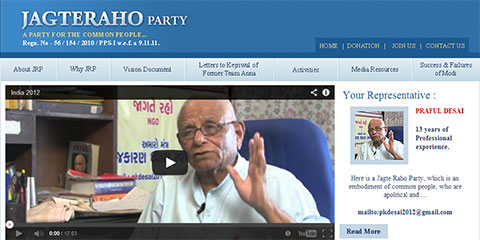 This one, too, was created by a former Team Anna member. The founder-president Praful Desai, a former bank manager in Vadodara, is disturbed by India’s poor economic growth and rising corruption. The party’s website contains a long list of the many failures and successes of Gujarat chief minister Narendra Modi’s government.
Support our journalism by subscribing to Scroll+. We welcome your comments at letters@scroll.in.