Mar 17, 2014 · 07:11 am
Mridula Chari
When a friend of Animesh Tripathi wasn't able to join the Indian Air Force because he had red-green colour blindness, the 17-year-old Delhi resident decided to make an application for computers and tablets that would alleviate colour blindness. ReColor is still in development, but Tripathi's basic research on it has won him a place at the Intel International Science and Engineering Fair, to be held in May in Los Angeles.

He is one of 12 participants shortlisted from India after a fair in Bangalore in November.

“I started working on this project from March to May 2013 for the Google Science Fair which was being held online,” said Tripathi, who is currently writing his 12th standard board exams. “After that, I decided to develop it further for the Intel fair.”

Colour blindness does not necessarily refer to a complete inability to differentiate between colours, but to a difficulty in perceiving the difference between red, green or blue hues. Seven per cent of the world’s population is colour-blind –  one in every 15 people.

Not many people in India know about the condition, said Tripathi. While developing the app in its initial stages, he visited several eye specialists and organisations for the blind, but was unable to get much support from them. “It is difficult for people to know about their colour blindness as most people do not go to doctors to check for it,” he said.

According to Tripathi, there are several ways one might go about achieving colour correction while using a computer screen or tablet. An easy one is to change the contrast of colours so that differences are more easily perceived. He is more ambitious. He is working on an algorithm that will examine each pixel on a screen and individually process them to enhance colour perceptions.

The circles pictured below show how people with different types of colour blindness can be able to see the difference between colours. 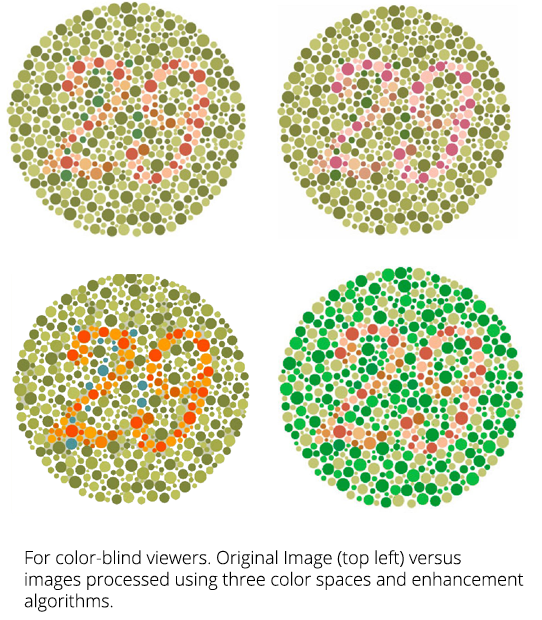 “I want to develop a universal algorithm where you can customise how you view different colours,” he said. “I have narrowed it down to four algorithms now and I need to test them with more people.”

Tripathi is developing two versions of ReColor. One is a basic Google Chrome extension that will allow colour blind users to enrich their online experience with a single click. The other will be a native feature that can function on any device, from tablets to laptops, to enhance accessibility.

“I need the algorithm to be more precise in terms of effectiveness and narrow it down to one,” he added. “I have to cumulate all my research by April 20, which means I have to finish all my testing by the end of this month.”

After being selected for the fair in November, Tripathi and the 11 other participants attended a coaching camp to help them spruce up their projects for their final presentation in May. Mentors there said he needed to test his work on actual subjects who have the condition. For this, he needed a larger sample size.

He pitched the project on the popular crowdfunding website Indiegogo and exceeded his goal of $1,000 by $597. The money will go towards accessing a larger sample audience online.

Tripathi is no stranger to the world of project development. He learnt his first programming languages – C, C++ and others in the family – in the fifth grade. By the ninth grade he had learnt PHP, HTML, CSS and Javascript. This was also the year in which he started working on developing projects.

He now does website designs and front-end development, and hopes to attend college in the US later this year, once admissions come through.

If Tripathi wins at the Intel fair, he plans to give 30 per cent of the reward money back to the donors who contribute to his project online.