Mar 19, 2014 · 06:10 am
Aarefa Johari
Malaysian Airlines MH370 has been missing for nearly two weeks now. Twenty six countries are on a desperate hunt for any trace of the aircraft, or the 239 people on board. The Malaysian government believes the plane was deliberately diverted off its path and has even suspected a case of hijacking by one of the pilots or crewmembers.

Malaysian opposition leader Anwar Ibrahim – who was convicted to five years in prison for sodomy on March 7 – created a stir in the country on Tuesday when he admitted to the media that Zaharie Ahmed Shah, the pilot of the missing plane, was not only a supporter of his political party but also a relative of his son-in-law. Shah had also attended Ibrahim’s sodomy trial in court hours before MH370 took off.

While this has been intriguing fodder for the international media, the missing flight is not, for the moment, high on the list of concerns for the average Malaysian. In Kuala Lumpur, the capital, and several other surrounding districts, residents are facing a more pressing crisis – a severe shortage of water.

On March 2, the Malaysian government’s National Water Services Commission and its private water supplier Syabas launched a system of strict water rationing that is now affecting more than 2.2 million people – 300,000 in Kuala Lumpur alone. As a result, residents of seven districts will get water for two days and then none for the next two. This rationing schedule will be in effect all the way till the end of March.

The government imposed the water cut after more than two months of drought in a country that usually sees a lot of rain. The rainfall has been very poor in catchment areas, causing water levels in two major dams – the Selangor and the Klang Gate dams – to fall below critical levels.

Citizens in Kuala Lumpur and most parts of Selangor state, the economic hub of Malaysia, are scrambling to save every drop of water, cutting down on essentials like laundry, and are even travelling long distances to the homes of friends or relatives just to able to bathe. Not surprisingly, local media reported that the sale of large buckets, drums and other water containers has hit the roof.

"Those of us who have buckets, club memberships and water tanks attached to our houses are feeling very relieved right now," said Fatima Thomas, an expatriate  in KL.  "But not everyone is so lucky."

The lack of rainfall has also brought on a host of other problems for Malaysians, who are now facing excessive heat and hazy skies because of increasing air pollution and the rise of the dengue fever, which claimed 38 lives in Malaysia in January and February.

The anger of the citizens is evident on social media platforms like Twitter, where Malaysians rank their water problems above the missing MH370. 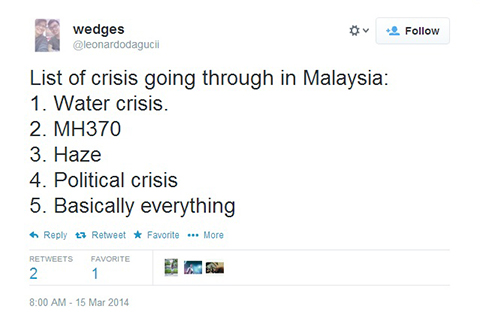 The drought situation has come at a time of political turmoil for Malaysia, with Anwar Ibrahim, a widely popular leader, being re-convicted for sodomy. In the 1990s, as the country’s finance minister and deputy prime minister, Ibrahim had grown sharply critical of the government’s capitalist policies. In 1998, he was convicted of sodomy and spent six years in prison before his conviction was overturned by Malaysia’s highest court.

In 2008, another sodomy case was filed against him, and a similar drama ensued – he was acquitted by a lower court in 2012 and as of last Friday, has been sentenced to jail again after the acquittal was overturned. Ibrahim was due to contest in a state-level election this month but will no longer be eligible to do so, sparking protests from locals as well as international human rights bodies, which believe his conviction was politically motivated.

Even Subramanian Swamy has a theory about MH370