Contribute Now
Ad
Everyone associates the Aam Aadmi Party with the jhaadu symbol, but had the Election Commission not allowed them to use it, the party could have contested under signs ranging from a diesel pump to a frock. These are among the wonderful and slightly bizarre symbols on the EC’s latest list of 85 free symbols that any aspiring party or independent candidate can choose from.

The EC realised the need for party symbols during India's first election in 1952. Since a significant section of the population was illiterate, they needed a foolproof way for voters to be able to identify their chosen parties while maintaining a secret ballot. While six national parties and 45 state parties have been allotted permanent symbols by the EC, India also had 1,392 registered parties as of 2013 that had not managed to win enough votes to be recognised by the commission and thus have to contest for a limited number of icons. 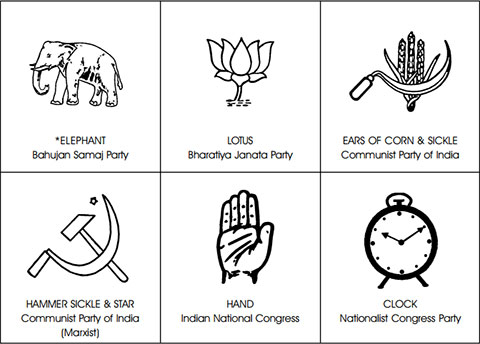 As with parties themselves, the full list of symbols is a work in progress. In 2004, there were 10 fewer available symbols for candidates to choose from. Some symbols moved up to the state parties list in this decade, but the rest are additions that reflect modernisation.

The ceiling fan and telephone of 2004, for instance, are joined by an air conditioner and dish antenna in 2014. Alongside the saw and the scissors, the tools of traditional trades, there is also a stethoscope and sewing machine, which might reflect growing white-collar aspirations.

Voters in 2014 could also potentially vote for the chess board and not just the carom board, a comment, if ever, on the nature of the political system. Cricket gets two mentions with a bat and a batsman. Even AAP’s jhaadu did not exist in 2004, it having been added some time between 2004 and 2012, when the EC assigned it to the Naitik Party of Uttar Pradesh. Inexplicably, the axe has disappeared, perhaps because it is less desirable to bring a potential weapon to a rally than something like the All India Trinamool Congress’ flowers and grass.

The symbols themselves reflect the preoccupations of various election commissioners over the years and lend themselves to rough categories. There are 28 symbols that are household implements, with kitchen staples such as a cup and saucer, a mixee and a plate stand to more generic ones such as an almirah, table lamp and window (no door, alas).

There are half as many items of clothing and personal grooming. One is the fabulously named "lady purse" that looks as if it could knock a row of harassers flat without breaking a stitch. There is also a toothbrush, presumably to remind voters that twice a day is best for dental hygiene, and a lacy frock that looks as if it wandered right out of the 1950s.

The two transport vehicles that survive on the free symbols list are the auto and a dolli, the car having been taken by the Telangana Rashtriya Samiti. If you are of the gourmand nature in the right constituency, you could help a candidate have his or her cake and eat it too, or even instill healthy eating habits in children by telling them how you voted for a cauliflower.

Despite the range of choices, some state parties still manage to vie for the same symbols. The bicycle speaks as a quixotic symbol of a common man’s empowerment and has the most number of repeats. The Samajwadi Party and Telugu Desam Party both use the two-wheeler, but so do the National Panthers Party of Jammu (Kashmir) and the Manipur People’s Party (Manipur).

Elephants and lions are the only animals to remain on the list of symbols, reportedly after complaints of ill-treatment of live animals during rallies. The Maharashtrawadi Gomantak Party (Goa), the Hill State People's Democratic Party (Meghalaya) and the All India Forward Bloc (West Bengal) are votaries of the lion, though they run the disadvantage of never being able to campaign with the real-life version of their mascot.

The sun has some oddly specific variations. One is the Dravida Munnetra Kazhagam's rising sun that shines forth from a mountain range. This sun also adorns DMK leader M Karunanidhi’s vast network of media outlets, thus ensuring maximum visibility even through the period of a common code of conduct. The other sun is one without rays, assigned to the Zoram Nationalist Party (Mizoram). Since voters cannot be expected to recognise a simple stodgy circle as a glowing orb of light, the commission's artist simply scribbled inside the circle to produce the impression of depth.

The EC will announce the complete list of symbols for this general election after nominations close on April 5.