Contribute Now
Ad
How real is the Modi wave in Bihar? Does it have a sweeping presence in the state or is it limited only to certain sections? To what extent does the reality in each of the state’s 40 Lok Sabha constituencies correspond to the predictions of the opinion polls?

It is no secret that opinion polls have an urban bias and often fail to reflect the voices of the members of the lower castes and the minority communities who are not keen on Narendra Modi becoming prime minister. In the interiors of Bihar's 40 constituencies, these caste and community considerations seem to have neutralised the Modi wave greatly.

A constituency-specific assessment based on detailed interactions with locals in each of state’s 40 Lok Sabha seats suggest that the picture isn’t as rosy for the Bharatiya Janata Party as various opinion polls would like you to believe. This puts a question mark on the ability of pollsters to capture the mood of people belonging to weaker sections and residing outside the urban areas.

Of the state’s 40 seats, there are only nine in which the probability of the BJP victory is really high. It is a foregone conclusion that one of them – the Patna Saheb constituency – will go to the BJP. In the remaining eight seats, the BJP appears to be in close contest, and perhaps even has the edge, over the Janata Dal (United) combination or the Rashtriya Janata Dal-Congress group. These seats are Arrah, Buxar, Purnia, Banka, Sheohar, Maharajganj, Saran and West Champaran.

In four seats, the chances of the BJP winning is quite remote, despite its aggressive campaign. These seats are Nawada, Araria, Katihar and Begusarai. In Nawada, where polling took place on April 10, RJD candidate Rajballabh Yadav is believed to have gained substantially over BJP nominee Giriraj Singh. In Araria, the odds are heavily tilted in favour of the RJD. In Katihar, the Nationalist Congress Party is thought to be ahead while Begusarai is being called in favour of the Communist Party of India candidate

In fact, these 13 seats – the nine where the BJP seems to be in contest and four that it is likely to lose – are the only ones in which the possibility of a Modi wave is part of the popular debate. In all Bihar’s other constituencies, the saffron party is nowhere in the race, nor is Modi part of the debate.

In the last Lok Sabha, the BJP won 12 seats in Bihar. This time around, the BJP appears to be in the contest in only four of the constituencies it now holds – Patna Saheb, West Champaran, Purnia and Sheohar.

As for the BJP’s allies in Bihar, the Lok Janshakti Party appears to be in close contest in two constituencies: Ramvilas Paswan in Hajipur and his brother Ramchandra Paswan in Samastipur. Rashtriya Lok Samata Party candidate Upendra Kuswaha seems to be in contest in Karakat seat. None of these three candidates, however, has a clear edge over their opponents. 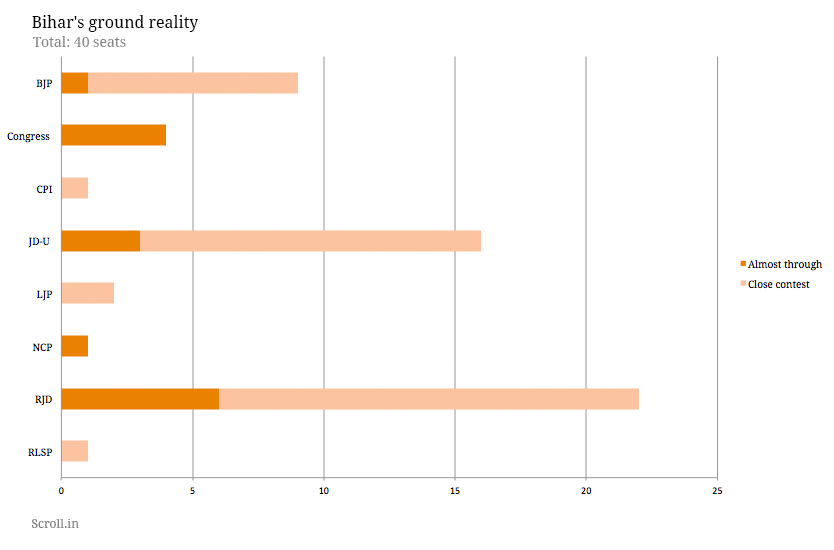 The constituency-level picture for the RJD-Congress combine is also completely different from the one being portrayed by the pollsters. There are at least six constituencies in which the RJD candidates appear to be much ahead of their opponents. These RJD candidates are Misa Bharati (Patliputra seat), Taslimuddin (Araria), Abdulbari Siddiqui (Madhubani), MAA Fatmi (Darbhanga), Alok Mehta (Ujiarpur) and Raghuvansh Prasad Singh (Vaishali).

In addition, the RJD appears to be in close contest in at least 16 other constituencies. If Scroll.in's constituency-level interactions are to be believed, one must not be surprised if the RJD bounces back and emerges as number one party in the state.

Lalu Prasad’s allies are also better placed this time. The Congress, for example, has clear edge in four constituencies – Sasaram, Aurangabad, Supaul and Kishanganj. The NCP, its other ally, appears poised to win Katihar, from where it has fielded Tariq Anwar.

Equally significant is the fact that despite the pollsters generally writing off the Janata Dal (United), Bihar Chief Minister Nitish Kumar appears to be holding ground quite well. In a way, the JD(U) in Bihar continues to remain the dark horse as strong as the Bahujan Samaj Party in Uttar Pradesh. The major support groups of both the parties continue to remain the silent, marginalised voters of North India. In the case of JD(U), its core support groups – Mahadalits and most backward castes – have only recently crystallised and are so vulnerable that no one is certain about how many of them will actually go out and vote. If they do, the JD(U)’s performance would be even better in these elections.

As of now, in at least three constituencies, JD(U) candidates appear to be much ahead their opponents. These candidates are Uday Narayan Choudhary (Jamui), Kaushalendra Kumar (Nalanda) and Arjun Rai (Sitamarhi). In 13 other seats, Nitish Kumar’s party appears to be closely pitted against its rivals. The JD(U)’s sole ally, the CPI, has fielded candidates in two constituencies – Begusarai and Banka. In Begusarai, its candidate Rajendra Singh appears to have established an edge over BJP nominee Bhola Singh.