Contribute Now
Ad
Among Mumbai's more abiding urban legends is the one that the bouquets sold at traffic lights are actually floral offerings stolen from the city's graveyards. How else, the logic goes, could the vendors afford to sell flowers so cheap?

The truth, it turns out, is less morbid. Far from skulking around cemeteries at night and making off with flowers left there by grieving relatives, certain street sellers in south Mumbai have a far more reputable source for their wares: five-star hotels.

That's something London School of Economics student Anitra Baliga discovered as she researched the dynamism of the city's small entrepreneurs. One part of her study was focussed on the flower sellers at the seaside boulevard of Marine Drive. Baliga realised that they obtain some part of their stocks at night, after events at the hotels and weddings at the numerous gymkhanas along the strip. The flowers, which would have otherwise been discarded, get new life once collected by the street vendors, who cut and pack them into fresh bouquets, and sell them to customers at the traffic junction.

Mumbai imports 1,560 tonnes of flowers from India and abroad every day – more than any other part of the country, said Baliga. While there have always been weddings and events along Marine Drive, the quality and varieties of flowers used in decorations now reflect far more expensive tastes. Roses and carnations are considered everyday flowers and are sold for cheap. But orchids and lilies could go for as much as Rs 100 for a bouquet of six or seven flowers.

The fortunes of street vendors rose in tandem with the wedding industry. Three or four years ago, florists began to sell more orchids and lilies over regular gajras and marigolds, something that Baliga noticed, and which prompted her to conduct her study. She spoke to various vendors on the streets and in shops, to flower market suppliers, and to wedding and event managers who passed flowers on after the event.

These trade secrets did not tumble out naturally. Baliga had to work over several days to gain the trust of the vendors. To outsiders, they maintain that their only source of flowers is the Dadar flower market, which operates just outside the Dadar station well before dawn every day.

The flower sellers at Marine Drive certainly know their business. They are all members of the same extended family from Adalaj in Gujarat, and have been plying their trade on the pavements for around 30 years.

Their day begins very early in the morning, getting flowers from places like the Dadar flower market, and often ends very late at night, when they source flowers after events get over at gymkhanas and hotels. 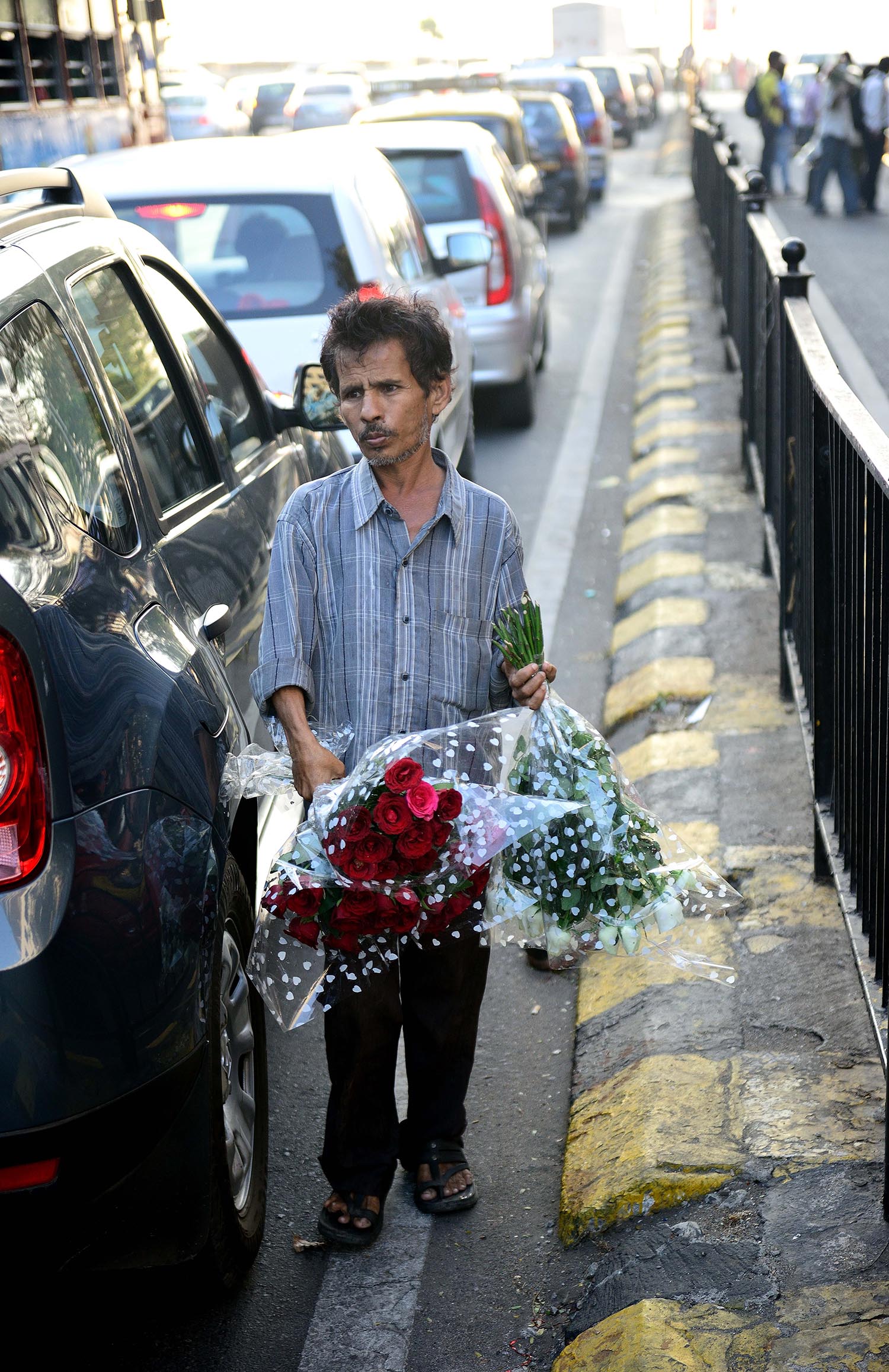 “We will sell our flowers even if we get only a profit of Rs  10 on it,” said Mukesh Gada, who was pacing the street with his last two bouquets of scentless orchids late at night. “If I don’t sell these today, I will lose far more money, so even though I am tired, I have to go on.”

He had been on his feet since eight that morning, navigating through the Dadar flower market, and attempting to cut the best deal. He said he had a fairly good estimate of how much dhandha, or business, he would get each day. This is vital. Since his flowers are not always fresh, they will wilt if not sold quickly.

“The entire process is very instinctive, as is the case with a lot of stories of street entrepreneurship,” Baliga said. “He knows exactly how much to buy and sell each day. He also has a flexibility and advantage of being on the street that a regular florist does not.”

Street florists have even developed a system of classification for different signal junctions. They sell their most expensive bouquets at the “VVIP” Kemps Corner junction, which leads to the wealthy precincts of Altamount Road, Peddar Road and Breach Candy. A grade lower, in a manner of speaking, is the “VIP” Babulnath junction at the northern end of Marine Drive. They sell the remainder at the junction leading to Churchgate, where prospective customers are likely to be of the hoi polloi.

“They know which flowers are popular and who buys them,” said Baliga. “They are constantly reading into Bombay as a city, its neighbourhoods, its citizens.”