Contribute Now
Ad
Mayawati’s ability to upturn the Bharatiya Janata Party’s bullock cart has started becoming visible on the ground, though this is reflected neither in opinion polls nor in the high-decibel television debates. In the majority of the constituencies in eastern Uttar Pradesh, or Poorvanchal as they are collectively called, the elephant is moving steadily, making it difficult for the BJP to take major advantage of whatever wave its prime ministerial candidate Narendra Modi has generated in the region.

In the 2009 elections, her Bahujan Samaj Party won nine seats out of the 30 constituencies in eastern Uttar Pradesh. This time round, Mayawati appears poised for a major success in Poorvanchal. Not only is the BSP holding its ground here, it also appears to be making a substantial gains at the cost of the Samajwadi Party and Congress, even as it holds its own against the BJP in a good number of seats.

A constituency-specific assessment – based on Scroll.in’s detailed interactions with the locals – in each of the 30 Lok Sabha seats in eastern Uttar Pradesh shows that it is the BSP that is fighting the real ground battle against the BJP. Of the 30 seats, the BSP appears to have considerable edge in eight constituencies. These are Mirzapur, Bhadohi, Lalganj, Salempur, Sant Kabir Nagar, Ambedkar Nagar, Jaunpur and Machhalishahar.

In addition, Mayawati’s party is in close contest in 12 other constituencies here. Of these, five constituencies had elected Congress representatives in the last general election, three went to the BSP, three to the SP and one to the BJP.

Of the four constituencies in eastern UP that the BJP won in 2009, it appears poised for victory only in two – Gorakhpur and Varanasi. The third – Azamgarh – is unlikely to go to the BJP this time. SP chief Mulayam Singh Yadav is the favourite in this constituency. In Bansgaon, BSP candidate Sadal Prasad appears to have blocked the way of BJP’s Kamlesh Paswan, and many locals say that they would be surprised if the constituency goes to the saffron party this time. 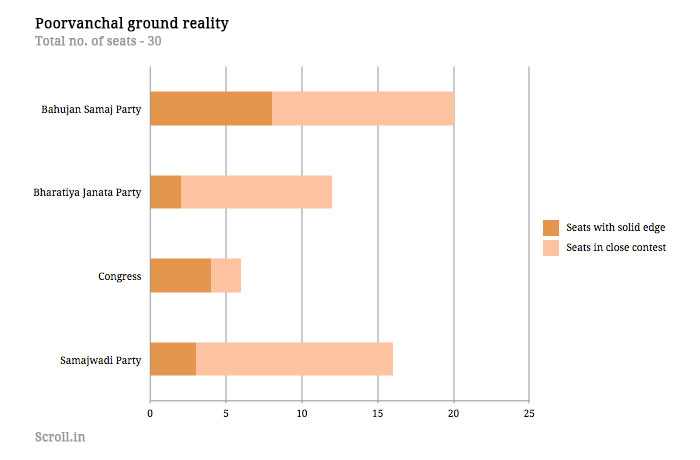 Scroll.in’s constituency-specific assessment suggests that apart from the two constituencies in which the BJP appears to be comfortably placed, there are 10 others in which it is in close contest. Of these, the Congress, BSP and SP had won three each in 2009, while one had been wrested by the BJP. In at least four of these 10 constituencies, rebellion within the ranks of the BJP is being seen as the major reason for the party not being able to wrest a significant edge over its rivals so far. These constituencies are Deoria, Salempur, Kaisarganj and Mirzapur. In the first three of these, the unrest among the local BJP leaders is related to dissatisfaction over the distribution of tickets. In Mirzapur, a major section of the party is up in arms because the constituency was handed over to Anupriya Patel, a candidate from the BJP’s alliance partner, the Apna Dal.

Significantly, in the majority of the seats where the saffron party is in a close contest in eastern UP, its main rival is the BSP. In seven out of 10 seats, the fight seems to be straight between the BJP and the Mayawati's party. Only in three of these constituencies – Ballia, Kaisarganj and Maharajganj – does the SP appear to be occupying the frontlines against the saffron party.

What is even more remarkable is the fact that, barring the Varanasi constituency, in which Congress’ Ajai Rai has so far posed a feeble challenge to Narendra Modi, nowhere in eastern UP is the grand old party visible in the fight against the BJP. In the 2009 elections, the Congress, which eventually won one-third of the seats in eastern UP, was ahead of all other parties in this region. But this time it seems to have melted away in nearly half of them. For the moment, the Congress seems to be too preoccupied with protecting its seats to fight the battle to win new ones.

Of the 10 seats the Congress won in 2009, it appears comfortable only in four – Amethi, Dumariaganj, Gonda and Kushinagar. In Faizabad, the SP’s Mitrasen Yadav seems to have a significant edge over Congress’ Nirmal Khatri. In Barabanki, which was won last time by PL Punia, the Congress is battling with BSP’s Kamla Rawat. In remaining seats it holds – Bahraich, Sultanpur, Shrawasti and Maharajganj – the grand old party has simply evaporated.

As per Scroll,in’s assessment, the SP appears doing only slightly better than the Congress in eastern UP. In 2009 elections, the SP had won seven seats in this region. But so far, the SP has managed to win a considerable edge only in three constituencies – Azamgarh, Faizabad and Shravasti. Significantly, five years ago, the SP had won none of them. While Azamgarh had gone to the BJP, Faizabad and Shravasti had elected Congress representatives.

In addition, the SP appears in close contest in 13 other constituencies. In 10 of them, it is a straight fight between the SP and the BSP, and in majority of them it is the latter that has the edge.

For the SP, the situation would have been worse had Mulayam Singh Yadav not decided to contest from Azamgarh, in addition to his seat in Mainpuri. The consequences of Mulayam's decision can clearly be seen in Azamgarh, where his chances of winning are very high. Besides, his candidature has energised party workers in neighbouring Ghosi and Lalganj, bringing the SP candidates back into the fray.