Become a Member
Ad
As voting ended on Monday, statistics gurus feverishly crunched the exit and opinion poll numbers to offer up a semi-credible prediction of the results. But India’s national elections have always been more a black box than a horse race, given the influence of local politics and the lack of credible voting analysis.

This time around, the results seem less predictable than ever, with the Aam Aaadmi showing unexpected strength, voting in individual states not turning out the way it was expected to, allegations of malpractice prompting re-voting and confusion about which candidate is going to be helped by record high voter turnout.

There are a few things we do know, though:

Don’t trust the opinion or the exit polls

Sure, based on early opinion poll data mostly taken before voting started, the Bharatiya Janata Party, led by Narendra Modi, was predicted to sweep the  elections so soundly that the results were described as a “thumping victory” for the party and the “worst-ever defeat” for the Congress. The latest opinion poll in the hotly contested state of Varanasi, taken by Aaj Tak, promises the BJP will win by “leaps and bounds,” and is accompanied by an incredibly bullish “NaMo Mania in Numbers” graphic. 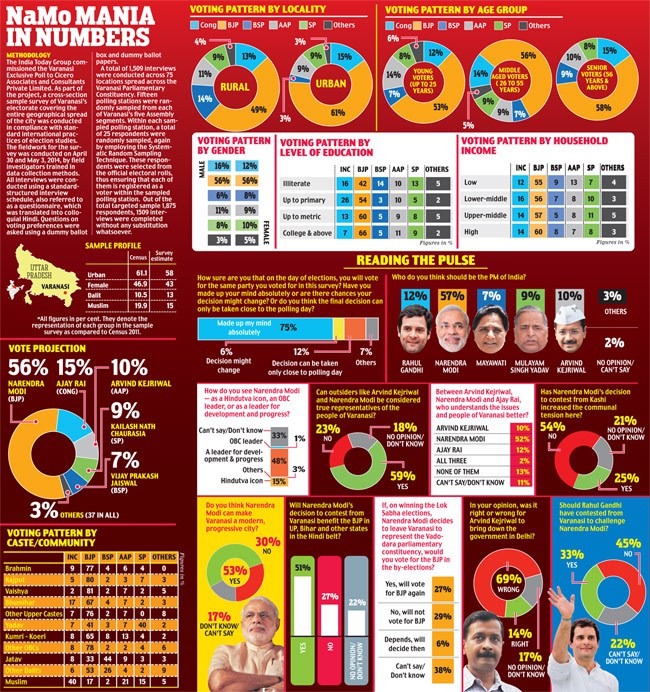 There’s little argument that the BJP has run a forceful and effective campaign, and the Congress a particularly lackluster one, or that Indian voters are hungry for a change in national leadership.

But India’s election opinion and exit polls, as conducted by the country’s big media houses, have been profoundly wrong in two of the last four national elections—and in each of the last three they have significantly overstated the expected votes for the BJP and its allies, as data collected by Economic & Political Weekly shows. 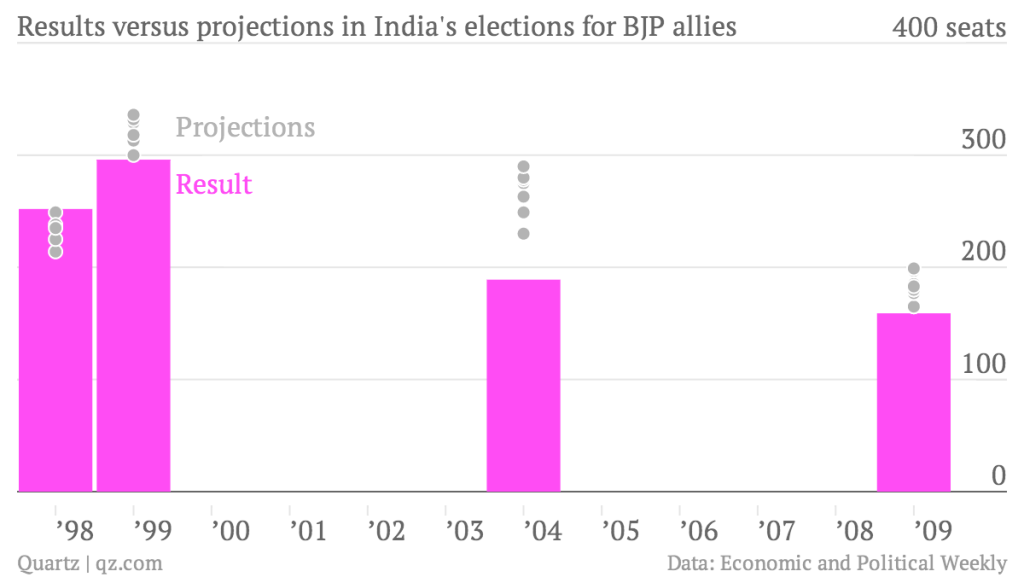 Opinion and exit polls have been so inaccurate so often in the past that not only are they not taken seriously by analysts, but many in the general population believe they are wrong on purpose in an attempt to curry favor with politicians.

Election opinion polls are viewed in India as “covert instruments used by media houses in collusion with political parties for falsely predicting their fortunes with the aim of influencing the electorate in India”, said Praveen Rai, a political analyst with New Delhi’s Centre for the Study of Developing Societies.

NDTV published one of the most optimistic polls about the outcome for the BJP and its allies on April 15, predicting the group will win 275 seats—a figure that would allow it to form a government alone, and avoid all the messy and unstable alliances. If that happens, it would be a resounding victory for the group and allow the BJP to steer the central government somewhat—although they’ll still have to get any new laws past the Rajya Sabha.

Asked about the NDTV’s opinion poll record in recent elections, head of corporate communications Manisha Natarajan said in an email the company had “never, ever” been pressured by a political party to report a certain opinion poll result. The company has explained its polling methodology completely online, she said, and added “NDTV’s polls have always been unbiased, and we have no political affiliation”.

Still, the NDTV prediction raised eyebrows when it was made, and recently after it was reported that the head of NDTV’s polling partner wasformerly an executive with the PR firm that has represented Narendra Modi’s Gujarat government for years.

Journalism has been muzzled

Ahead of this election, there have been numerous reports that journalists with negative things to say about the BJP or Modi have been pressured by editors and publishers to tone down their coverage, or leave their jobs.

“Reporters are being asked to pipe down; editors are losing their jobs; prime-time programmes are going off air; commentators are replacing vitriol with neutral ink while writing on Modi,” Outlook Magazine reported earlier this year.

Resignations from high-level positions at Indian media houses in recent months have been linked to pressure to cover the BJP or Modi in a positive light, including India TV’s editorial director, the former editor of Open Magazine, a popular talk show host and the former editor-in-chief of The Hindu, whose apartment caretaker was assaulted in Delhi this year, reportedly for the editor’s outspoken comments against the BJP.

The impact may have been an artificial inflation of the popularity of the BJP, some analysts and columnists believe. As Nilanjana Roy wrote recently in The New York Times:

'I am sceptical of the media stories that predict an outright victory for the BJP, in part because of the drop in the freedom of the Indian press over the last 10 years. Reporters in the Hindi-language media I spoke to privately didn’t doubt the consolidation of support for the party, or Mr Modi’s charisma, but they felt, as I do, that the riots that took place in Gujarat in 2002 during Mr Modi’s watch as chief minister have left their mark of distrust and fear, diluting some of the enthusiasm for the growth he promises to achieve. The possibility of a coalition government is not so far-fetched.'

Ultimately, learning who India has really voted for will need to wait until May 16, when the election results are released. But history tells us it would be practical to discount predictions of a sweeping victory for the BJP.

No country for women: no matter who wins the election, India will still be ruled by wealthy men