Contribute Now
Ad
When an army battalion moved into the school in Loharki, on the night of May 17, 1974, the soldiers informed the 2,000 residents of the village in Rajasthan that “air firing” the next day could “cause eye and nose irritation” but that things would “normalise thereafter”, recalled Gulab Singh Rawlot, who was then the chief patron of the 24 village panchayats of Pokhran town.

The next morning, India tested its first nuclear device, exploding an eight-kiloton thermonuclear device in the Pokhran firing range in the Jaisalmer desert, five km from Loharki village.  “No one was sure if the explosion would be successful or if the wind would carry harmful radiation and affect us,” Rawlot told Scroll.in.  “The villages around the explosion site were counted in the list of ‘martyrs’ as any damage including human health was expected to be like collateral damage in view of the larger good.”

Forty years after India’s Smiling Buddha mission, the villages in the vicinity of the Pokhran test range have long fallen out of the international spotlight.  But in the decades since, as they have been beset by what they claim are abnormally high rates of cancer and genetic disorders, these villagers have joined a tragic global circle of residents of nuclear test sites around the world who grapple every day with the fear of radiation exposure.

Among them is Krishna Ram, a 30-year-old labourer from Loharki, who said that his father Kanha Ram died around five years ago of a cancer that caused him to develop a lump on his throat. “It is because of the radiation which took place here,’’ Ram said, pointing to the sand dunes that were formed by the 1974 explosion. “There were no previous cases of cancer or skin irritation in this village. It only started after these explosions.”  In May 1998, India conducted a second nuclear explosion in Pokhran.

Shortly after the first explosion, crops in Loharki and Khetolai, the villages closest to the site, began to turn white. Six months later, villagers started to complain of skin irritation, a burning sensation in eyes and nose and eventually of cancer, genetic disorders and skin diseases in humans and cattle.

Instances of cancer are still commonplace. For instance, Om Prakash and his wife Tulsi Vishnoi lost their 18-year-old daughter, Manisha, in August 2013. The high-school student initially complained of a stinging pain in her ears and was soon struck with partial paralysis of her face. “The doctors told us she had cancer,” said her mother. “By August 20, she left us.”  Vishnoi is now collecting medical records and seeking the help of lawyers and the doctors who treated Manisha to investigate whether nuclear radiation was indeed the cause for her death.

“I had a healthy daughter with no previous medical history,” said Om Prakash. “If her cancer was caused due to the nuclear explosions here, I want the government to be accountable for it.”

Another villager, Ramrakh Bishnoi, also blamed his son’s death on the nuclear explosion. Sarvan Bishnoi was born in 2000, two years after five nuclear tests were conducted just 4 km away in Khetolai. “He didn’t have polio,” said his father. “We had vaccinated him, so we couldn’t understand why he was unable to walk at first. We went to the doctor but it did not help him.” Sarvan died in 2008.

Bishnoi is illiterate and has no medical records to establish the exactly cause of his son’s death. But Sarvan’s symptoms seemed very similar to the conditions described by a group of people from Nagasaki and Hiroshima who visited Khetolai in 1998. “They came here and cried when they told us what happened to their families after the nuclear bomb was dropped in their country,” Bishnoi said. “The effects of radiation are very dangerous and we live so close to the site, it is only obvious that all the diseases and deaths in the village are a result of this.”

Over the last four decades, the government has done little to wipe away the villagers’ fears.

Studies at nuclear tests sites around the world indicate rising incidence of cancer as one of the major health impacts. This led Dr Arjun Singh, a former Joint Director of Medical and Health Services in the Jodhpur region, who is also a resident of Loharki village, to carry out a preliminary medical survey in 2009 in the villages within a 10-km radius range of the explosion site. He and a team of doctors spent more than six months on the study.

“There is a definite rise in cancer, genetic abnormality amongst livestock and skin problems in the villages of inner radius from the test site,” said Dr Singh.  At the time of the survey, Loharki had around 17 deaths from cancer and Khetolai, 20 deaths.

However, the results of his survey are unpublished due to lack of radiation exposure studies on Pokhran’s water and air, in addition to its human and cattle population. Dr Singh’s medical survey can only be corroborated after such studies are undertaken in Pokhran and the results compared with data in other districts of Jaisalmer that are not exposed to nuclear explosion.

Decades after the tests, experts believe that groundwater in Loharki and other villages could still be contaminated.  Robert Jacobs, an associate professor at the Hiroshima Peace Institute, Hiroshima City University, who has studied several nuclear test sites, said that the presence of alpha emitting particles which are widespread at areas around all nuclear test sites remains a serious concern.

“These are a wide variety of particles, some radioactive like plutonium, and some made radioactive by the nuclear blast,” said Jacobs. “In an underground test like Pokhran, a great deal of alpha emitting particles remain in the shafts were the weapons were detonated. Many of these may enter into ground water or be taken up by plants as the shaft decays.”

These particles are hard to detect with a Geiger counter, he said. While the particles cannot penetrate the skin, they can lodge themselves in the body and, over several years, are likely to cause cancers.

“After the explosion in 1974,  around 25 rain water tanks and two wells in the village were all damaged and broken,” said Kishan Singh whose own tank in Loharki was damaged. “Some people came and warned us to not drink the water in the beginning as it could be contaminated.’’

Jacobs said that sicknesses recorded around test sites could be caused by many factors other than radiation. “When the sickness is from the widespread dispersal of alpha emitters, it is almost impossible to say they were caused by exposures to radiation,” he said. “The only way that is done is by doing very long term statistical comparisons with similar populations in areas away from nuclear test sites, and so this can take 50 years or more.’’

Jacobs has noted a typically rises in thyroid cancer, stomach and bowel cancer, lung cancer, colon cancer, leukemia and also many types of immune system disorders, occurring in the communities living around nuclear test sites including the ones in Marshal Islands, site of the largest nuclear weapons ever tested by the United States.

But in the absence of an epidemiological study in Pokhran – a study of patterns, causes, and effects of health and disease conditions in defined populations over a period of time – it is difficult to establish whether radiation exposure is the cause of cancer in these villages, said MV Ramanna, a physicist at the Princeton University’s Nuclear Futures Laboratory and Program on Science and Global Security, who himself has described numerous examples of the health impact of nuclear activity in his books.

“We cannot just look at an individual cancer victim and determine it is due to radiation,” he said, pointing out that cancers also occur due to natural causes and through exposure to carcinogens. “The Department of Atomic Energy has the necessary technical infrastructure to do the radioactive pathway analysis and there is a need to undertake this study.’’

At present, the DAE measures radiation level around the Pokhran test site twice in a year.  It claims that the levels have been normal since the 1974 explosion, so it has never studied the risk of health fallout in Pokhran. “In all these years, the radiation levels have been normal in the background of the test site,” said SK Malhotra, the head of the department’s Public Awareness Division.

He added, “We have not found radiation level to be increased or at risk, so how can there be co-relation with the number of cancer cases.”

However, sceptics point out that studies at other nuclear test sites have revealed the presence of alpha emitters in radiological pathways such as plants, animals and groundwater, which indicate that humans are at risk too. But the DAE has never actually undertaken such studies.

The 2011 Fukushima Daiichi nuclear disaster in Japan, following the meltdown and radiation exposure from three nuclear reactors, led citizens to educate themselves about radiation, its effects and steps to minimise potential exposure. Groups such as Safecast are continuing to map the radiological hazards in Japan, where official government bodies have been lopsided. Jacobs said, such experiments need to begin in Pokhran. “If agencies or citizens groups were to do detailed mapping throughout the areas around Pokhran it may show a very different picture than the one being drawn by officials.” 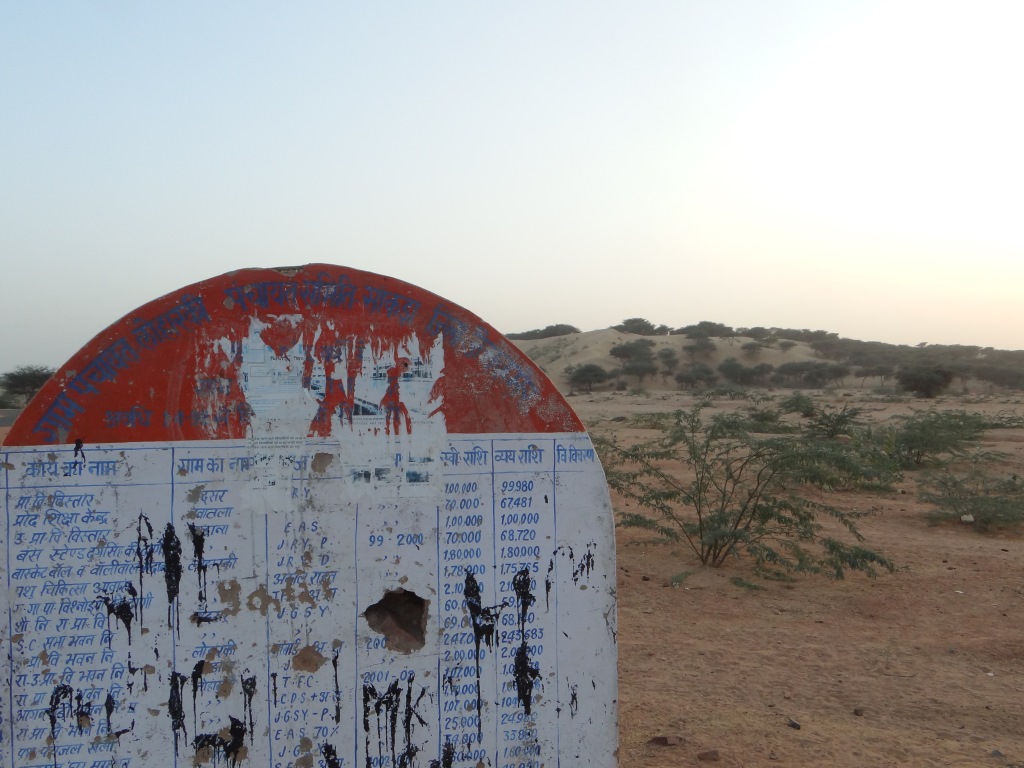