1) The Congress’ phenomenal rout
This is without doubt the worst performance of the Congress in a general election. Its performance in the Hindi heartland is remarkably dismal; the party managed all of seven seats out of a possible 251. This is in stark contrast with 2009, when it won 98 seats and worse than their previous low of 1977, after the Emergency, when it won only 12 seats. 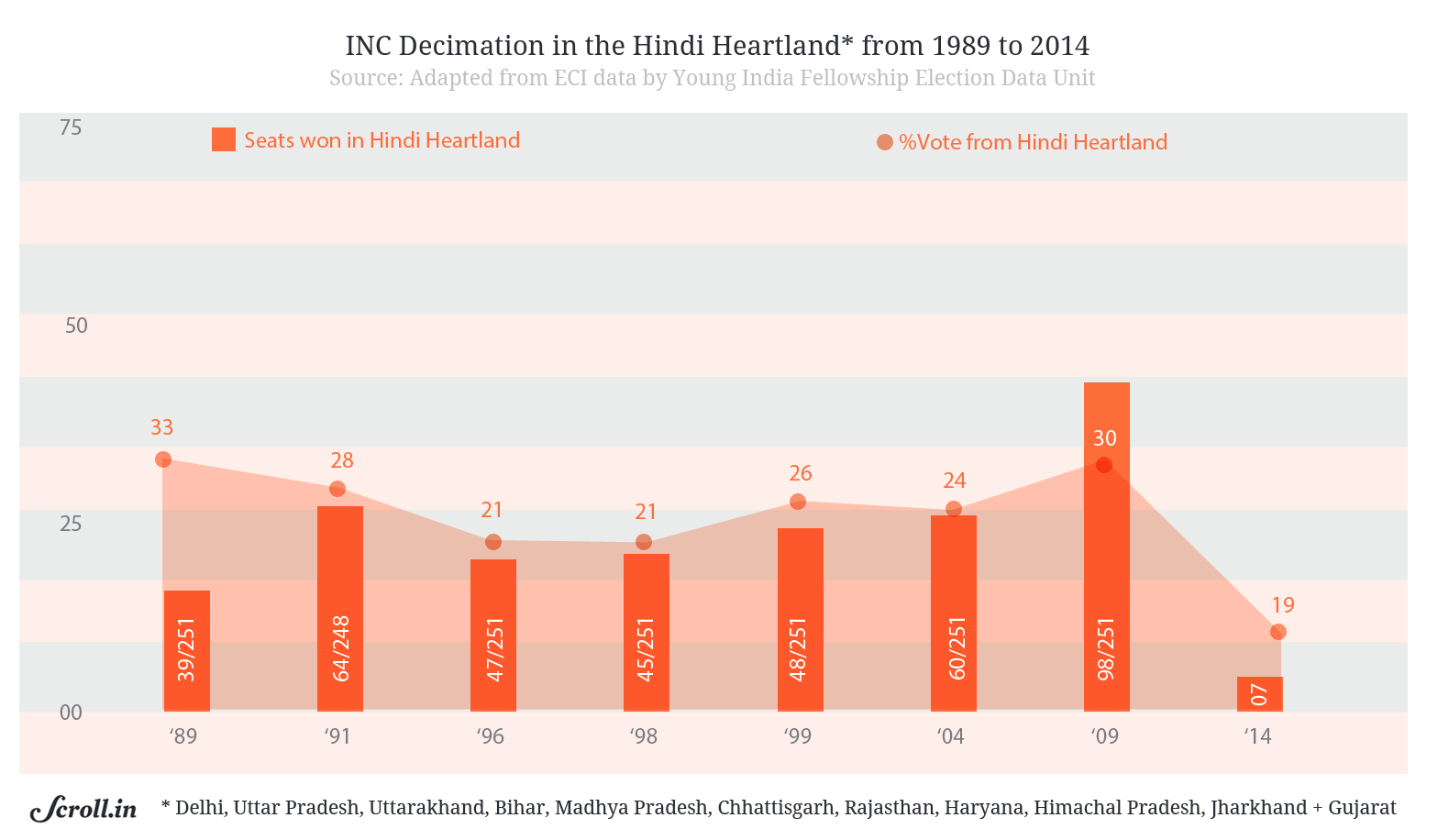 2) New terrain conquered by the BJP
Although the bulk of the seats won by the Bharatiya Janata Party are located within the Hindi belt and Gujarat, the BJP has spread its presence through a rise in vote share in less conventional states, making an important impact in new terrains across the country. This ripple effect can be conspicuously observed in the states of Assam, Jammu & Kashmir, Kerala and West Bengal, where it bagged an unprecedented 16.8% of vote share. 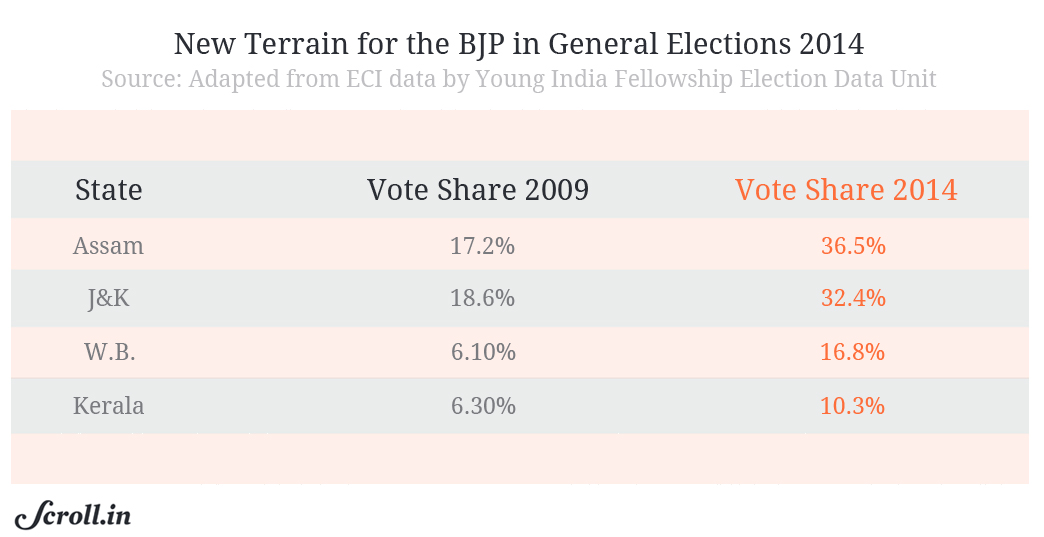 These two trends are maintained in 2014 but the heavy vote swings of the Congress and BJP and the amplitude of the BJP’s victory renders them unnecessary to the formation of the government.

This isn't to suggest that the National Democratic Alliance coalition won't last, but the balance of power between regional and national parties under the new regime will be radically different than it has been over the last 30 years.

Another distinct feature is the good score of parties dominating their state (such as the All India Anna Dravida Munnetra Kazhagam , Biju Janata Dal, Trinamool Congress) and the routing of erstwhile powerful regional parties engaged in multi-corner fights, such as the Samajwadi Party, the Bahujan Samaj Party, the Janata Dal (United) and the Rashtriya Janata Dal.

4) Urban support for the BJP rises
It is usually assumed that the BJP is an urban-friendly party. However, vote share per urban, rural and semi-urban seats in the 2009 elections reveal that it actually fared worse in cities. The 2014 vote share data, though, shows a stronger inclination of urban voters to support the BJP. Its urban success rate is also much higher in cities than in rural seats. 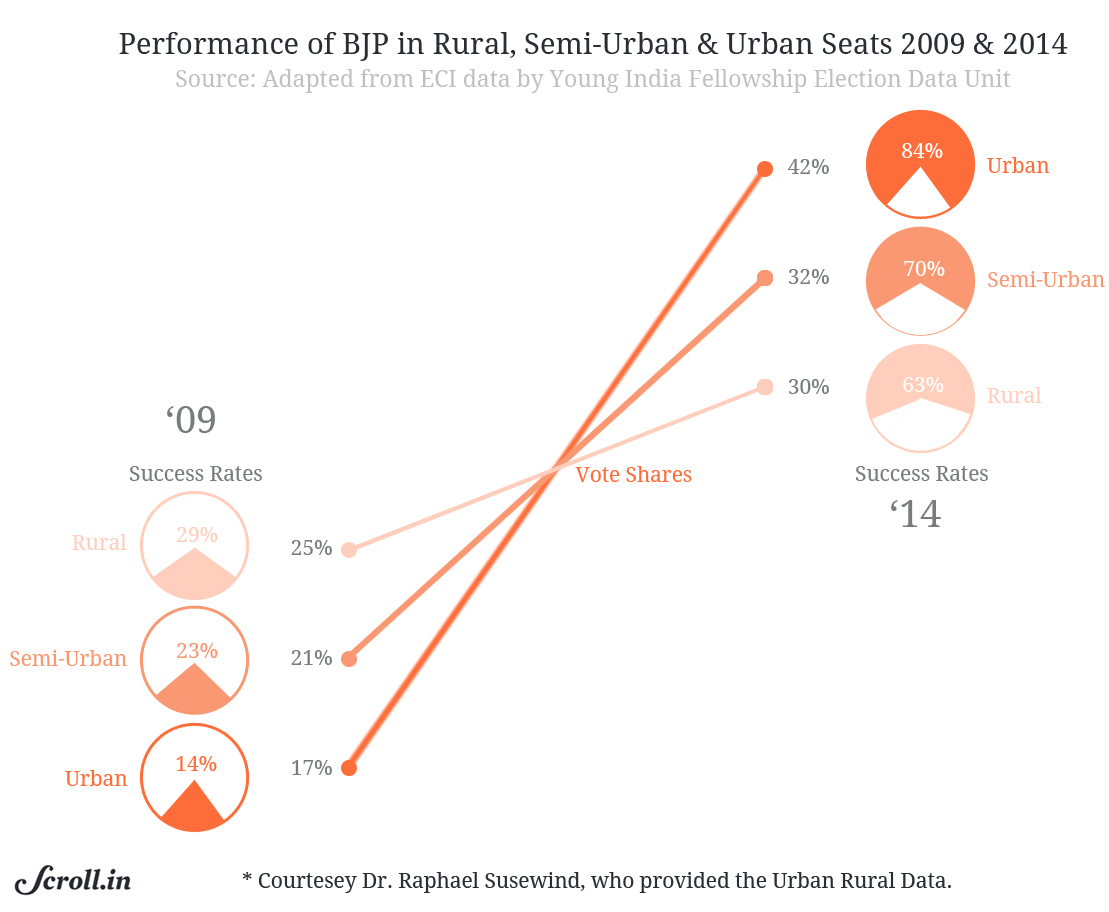 1) BJP remains a Hindi Belt party
In spite of BJP's extraordinary performance across India, it continues to remain a predominantly Hindi-belt party. Out of the 282 seats it has won, 206 are located in the nine Hindi heartland states and in Gujarat – its best performance so far.

Historically, the major share of BJP's seats and votes have always come from these 10 states, which have been the ground for the religious mobilisations that brought it to power in the late 1990s.

The BJP vote share in the Hindi belt has consistently been above 60% of the total votes it has polled across India, a trend confirmed in the 2014 elections.

The combination of the promises of development, voter polarisation on religious lines and caste politics remain at the heart of the BJP’s strategy. 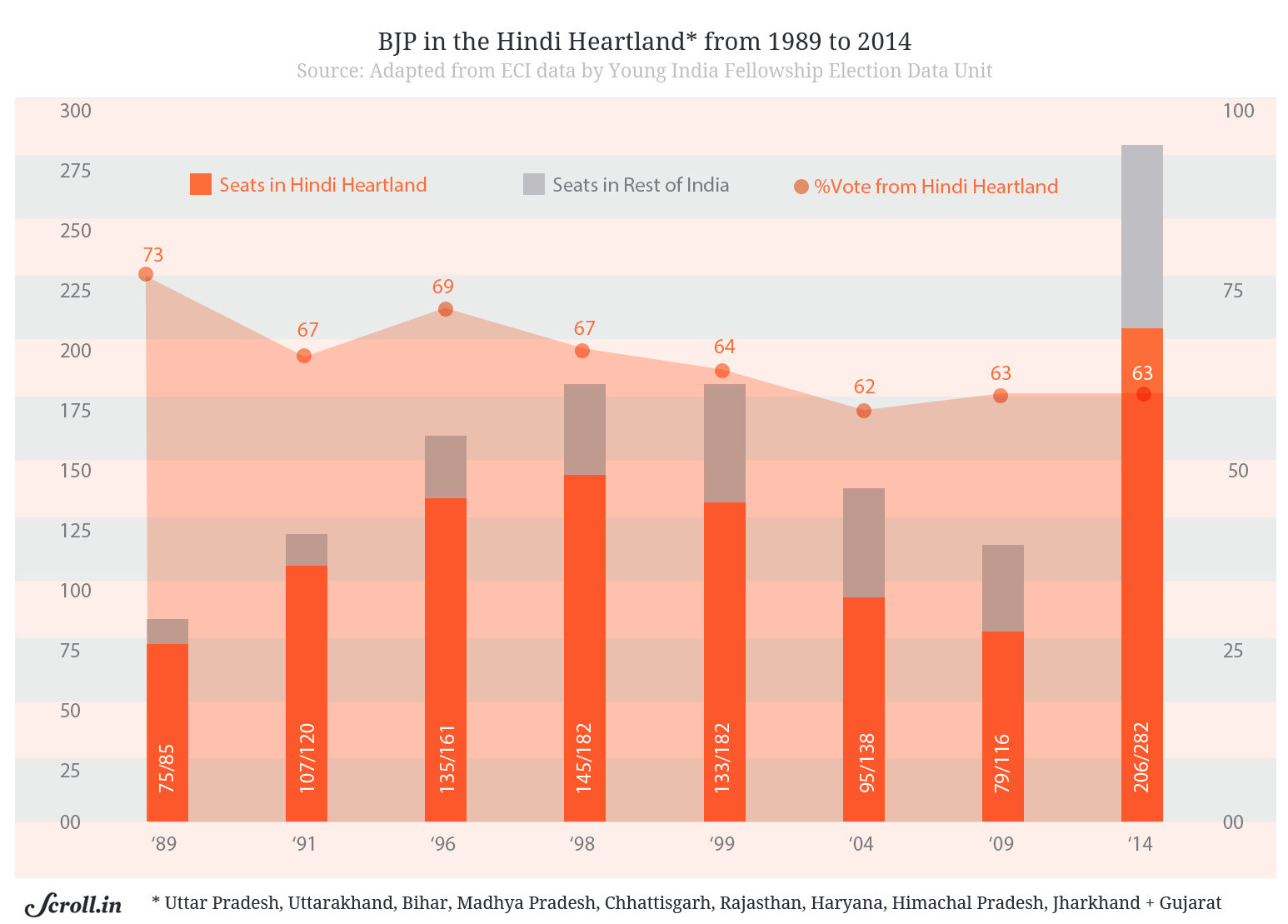 2) Under-representation of women
India's women, who form 47% of the population, have consistently been under-represented in the Lok Sabha. The elections of 2014 are no exception. Out of 642 women candidates, 60 won seats to the Lower House, only two more than in 2009.

Arguably, the situation in the past was worse, with an all-time low of 19 women MPs in 1977. The representation of women has not yet gone beyond a third of the recommended 33% reservation in Parliament.

Party-wise, the BJP sends 29 women to the Lok Sabha, the highest number from a single party ever. The Trinamool Congress sends the second-best tally of 10 women MPs, followed by the AIADMK and the Congress, with four women MPs each.

In Kerala, where literacy rate is the highest in the country (94%), there were only four women contestants in 2009 for the 20 seats from all the three major national parties – the Communist Party of India (Marxist), Congress, and BJP. During 2004 and 1999 there were just three contestants. Incidentally, no one won their seat. This year, Kerala has managed to get one woman elected.

4) Clean sweeps
The BJP’s landslide victory has gained from the clean sweeps that the party has displayed across Rajasthan, Delhi and Gujarat.

Although uncommon, past elections have also seen clean sweeps such as these.

In 1984, the elections that were held right after Indira Gandhi’s assassination were witness to a landmark victory by the Congress, not unlike the BJP’s success in 2014. It then swept Delhi, Haryana and Rajasthan.