Contribute Now
Ad
Women have been consistently been under-represented in parliament and the 2014 elections are no exception. 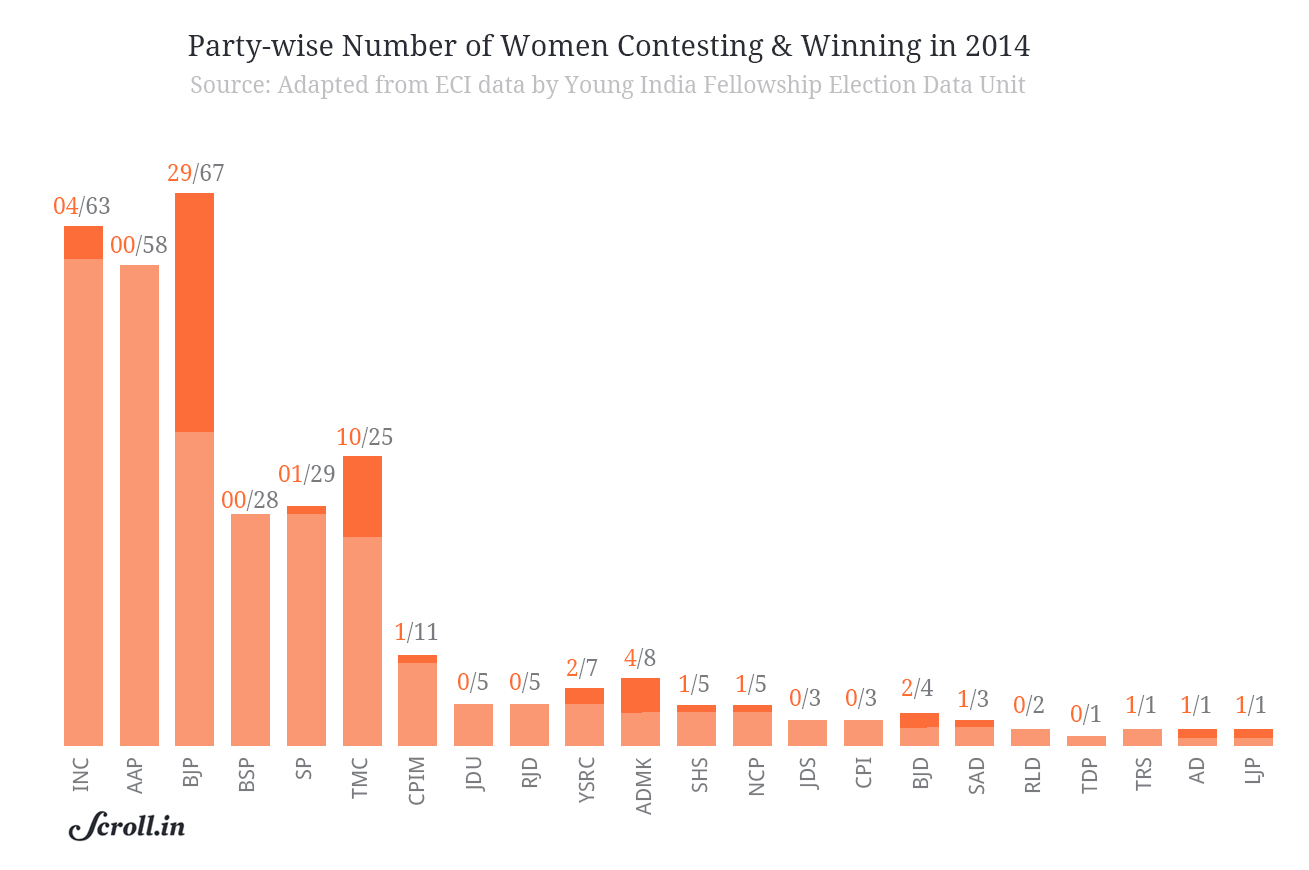 Out of 642 women candidates – 8% of the total number of people who contested this year – 60 emerged victorious. This is only two more than the number in the 2009 Lok Sabha. Though the situation is undoubtedly better than in 1977, when there were only 19 women MPs, the representation of women has not yet gone beyond a third of the 33% mark that has been recommended in the Women's Reservations Bill, which is yet to be passed.

Many other democracies have much much more successful in increasing women’s representation in their national legislatures. The global figure has nearly doubled since 1997, when the average representation of women in parliaments around the world was at 11.7%. Among the key factors that contributed to this increase was the adoption of representation quotas.

While the percentage of women representatives in India is more than 11% this year, the highest number recorded so far, it still lags behind other other countries. For instance, 18.3% of the members of the US House of Representatives are women, and 22.6% of the UK House of Commons.

In the neighbourhood, while more than 20% of the lower houses of Pakistan, Nepal and China’s are women, only 5–6% of the national legislative bodies of Myanmar, Bangladesh and Sri Lanka are female.

This could partly be due to the perception that women are less likely to win elections. Carole Spary from the University of York in her study of the 2009 general elections in India suggested that parties tend not to distribute tickets to women candidates in seats deemed winnable.

However, looking at the electoral success ratio for 2014, the women who were granted tickets by their parties had an average success ratio of 38%, as compared to 27% for men.

Party-wise, the Bharatiya Janata party is sending 29 women to the Lok Sabha, the highest number from a single party ever. The Trinamool Congress has the second best tally of 10 women MPs, followed by the All India Anna Dravida Munnetra Kazhagam  and the Congress, with four women MPs each.

Women formed 12.2% of the candidates fielded by mainstream parties, both national and regional, a feeble improvement compared to the 10% of 2009. 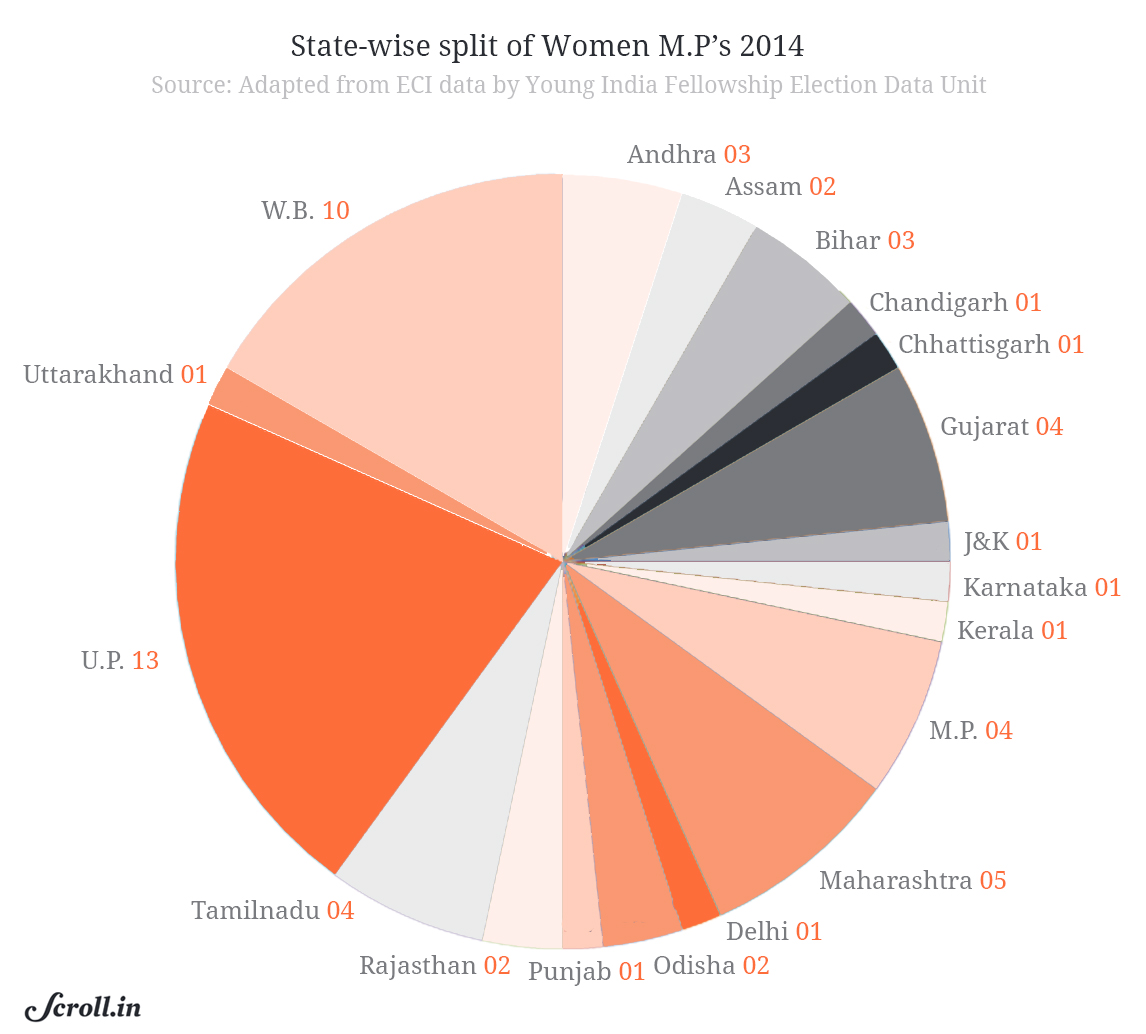 Among the women parliamentarians who have been elected the most number of times, Sumitra Mahajan of the BJP won for the eighth time from Indore, equaling the record of the late Rajmata of Gwalior, Vijay Raje Scindia. Maneka Gandhi and Uma Bharti of the BJP won for the seventh and sixth time respectively. Among the veteran women politicians, Meira Kumar lost a seat from which she had been elected five times.

It is sometimes argued that successful women politicians generally owe their careers to the connections of their male family members, wealth and social status. A quick look at some of the losing star women campaigners – Rabri Devi, Ambika Soni, Vijayamma, Deepa Dasmunshi, Priya Dutt, Medha Patkar, Smriti Irani and Gul Panag – show that the reality is different. 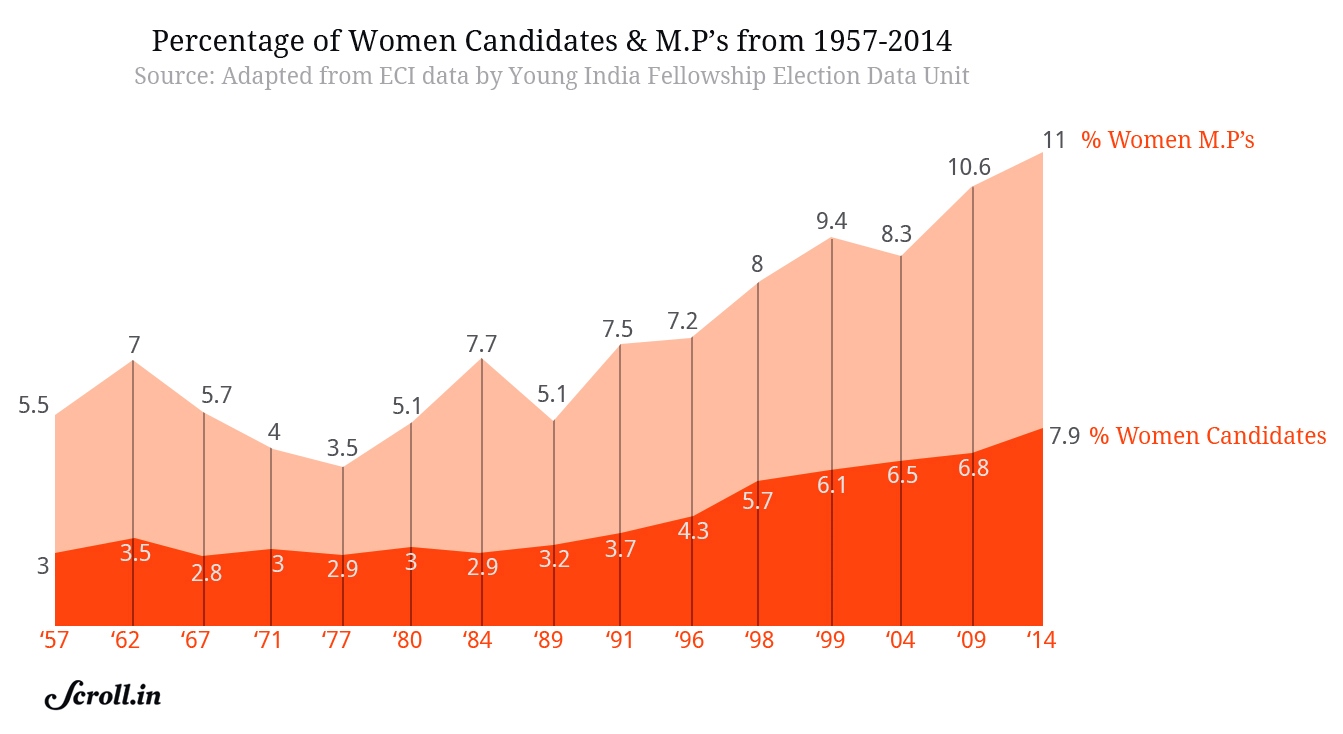 Will the review of saffron terror cases be Modi’s return gift to RSS?