Contribute Now
Ad
Suggestions last week that the Modi government may increase foreign direct investment in private defence production from the current 26% to 100% has led to concerns that the move could turn India into a mere manufacturing centre, without much control over the latest technologies.

Even though the finance ministry has not yet made an official announcement, the plan has raised a stir within the defence production industry, both public and private. Already, the Centre of Indian Trade Unions has declared its opposition to the proposal on the grounds that it would be detrimental to indigenous defence production by public sector units and would compromise national security.

India has permitted FDI in defence only since 2001, when the private sector was allowed entry in defence production. Before that, limited production was carried out by eight Defence Public Sector Undertakings, very few of which were involved in manufacturing heavy equipment for the armed forces. For this, India has relied on foreign manufacturers. As a result, the country has become the world’s largest importer of arms since 2010. In fact, military expenditure in India has been increased by 231% between 2001 and 2011: 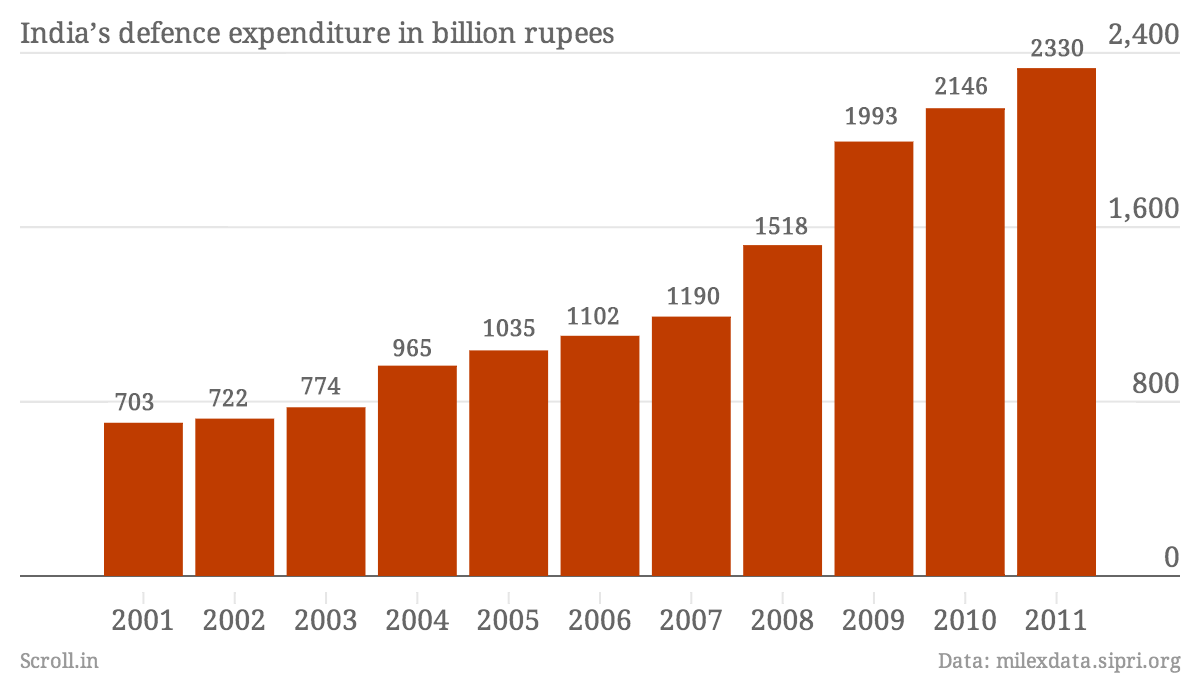 However, even when 26% FDI was allowed, the private defence production sector attracted very limited foreign investors. Between 2000 and 2010, the inflow of FDI in defence has been just $150,000, estimates Indian Strategic magazine. By comparison, this is how much total foreign investment Indian businesses has attracted over the past three years.

Defence experts say that the 26% cap has inhibited interest in the sector. It offers foreign companies only limited scope for meaningful returns on their investments, and does not allow them to retain control over their technology, said Laxman Behera, a research fellow at Delhi’s Institute for Defence Studies and Analyses.

“In order to give investors more incentives to share their technology with Indian companies, we need to have at least 49% or 74% of FDI, and up to 100% would be ideal,” said Behera, who has argued for 100% FDI in the sector.

In the past decade, with 26% FDI, smaller defence production companies have been able to bring in basic technologies for manufacturing arms and weapons systems. “However, these have not been the latest technologies,” said SM Vaidya, executive vice-president of the aerospace division at Godrej & Boyce, which has been manufacturing air frames for India’s BrahMos missiles, among other things. “With 100% FDI, companies like Airbus or Boeing will be able to bring their latest technologies to India, although these technologies will be fully guarded by them.”

Vaidya believes this would be the fastest way for India to provide its armed forces with equipment, without losing out on revenue for imports.

Said Behera, “It will also generate employment in India and indirectly benefit the economy through the multiplier effect.”

However, not everyone shares this enthusiasm. “As of now, the pace of manufacturing is slow in India, and we need to ensure we have the right policy frameworks in place to support 100% FDI,” said Indrapal Singh, a former president of industrial engineering units at Godrej. “Allowing 100% FDI right now might be a knee-jerk reaction – putting a cap at 49% might be a better idea.”

For some companies, the biggest concern with allowing complete foreign investment in defence relates to the intellectual property rights over technology. “All FDI policies must be in the national interest, for which it is necessary that the entity manufacturing defence equipment should own the intellectual property rights as well,” said a senior executive at the Kalyani Group, a company that hopes to become a big player in the production of artillery and specialised vehicles. “We need to be a self-reliant country.”