Contribute Now
Ad
The road to Delhi, they say, goes through Lucknow, capital of Uttar Pradesh, a state that has been the site of some of the most striking political transformations in recent times. It has witnessed the social and political assertion of Dalit and Other Backward Classes with the rise of the Dalit-led Bahujan Samaj Party and the Yadav-led Samajwadi Party. It is seen the decline of the Congress. It has also been been the cradle of the Bharatiya Janata Party’s religious mobilisations in the late 1980s and 1990s and the seat of its rise to national power in the late 1990s and now in 2014.

Uttar Pradesh also epitomises all the ills afflicting Indian politics – corruption, criminalisation, clientelism and patronage. This state of affairs is encapsulated in one popular and dreaded term – Goonda Raj. Among political parties, the Goonda Raj tag sticks the most on the forehead of the incumbent SP. The first two years of the current SP reign have been particularly marked by lawlessness, communal violence and a general climate of insecurity – recently and tragically highlighted by the rape and hanging of two teenagers in Badaun. But the criminalisation of politics in UP is hardly new.

In the mid-1980s, it was initially the Congress that, feeling the ground drifting under its feet, called on criminal elements to counter its decline. These guns-for-hire resorted to intimidating voters and various forms of rigging, booth capturing being the most popular way to delay a certain defeat into a recount or, even better, a re-poll. As time went by, these criminal elements understood the advantages of holding office themselves. They started contesting on their own, winning seats through a combination of muscle and money power.

Their criminal character gave them several comparative advantages – a capacity to mobilise illegal means to pursue a campaign, manpower, access to resources, the capacity to intimidate segments of the electorate. Their share among candidates kept increasing. In 2014, it has reached a third of the candidates fielded by the four main parties, nearly twice the national average. While the SP registers the highest number of criminal elements among its ranks, the other parties are not far behind.

Share of candidates with serious crime charges, among main parties (2009-2014) 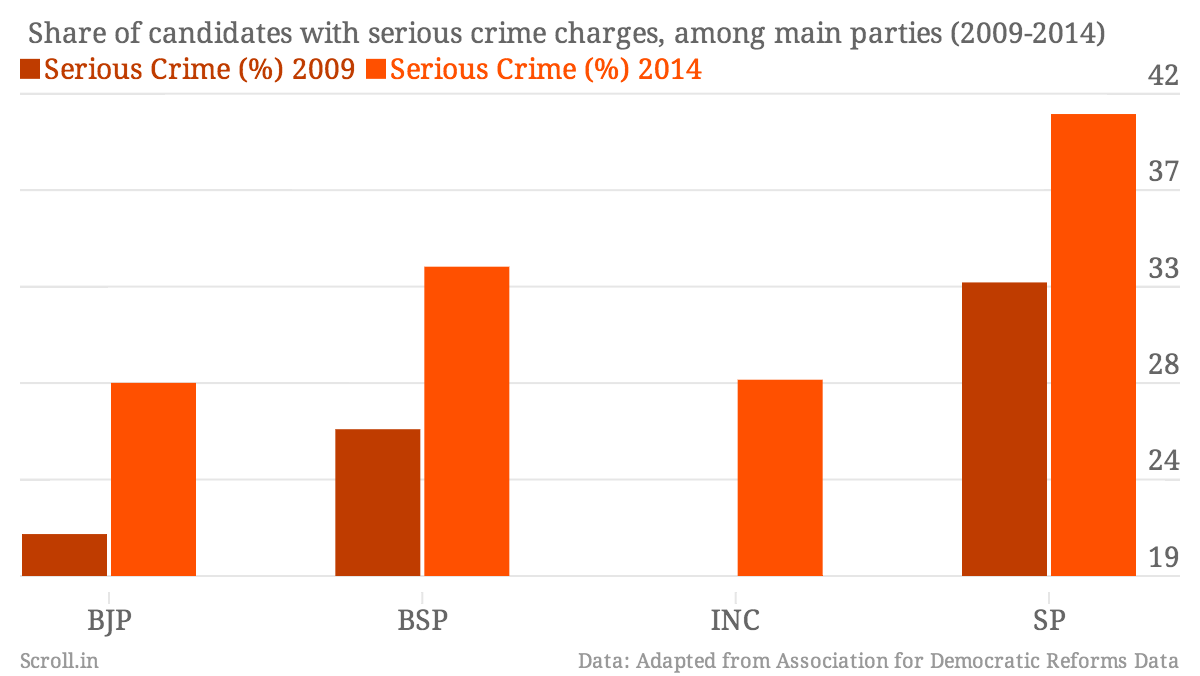 What this data does not show is the profound reconfiguration of the nexus between crime and politics in UP. Paradoxically, as the Election Commission’s grip over elections has tightened over the years – largely in response to this process of criminalisation – the number of criminal politicians has also substantially increased. In order to answer that paradox, one must consider the profile of the candidates in greater detail.

There are no fundamental differences in the sociological profile of politicians of various parties. For sure, the BJP distributes more tickets to upper castes and Most Backward Classes; the SP tends to favor Yadavs, Muslims and other dominant OBCs; the BSP distributes its tickets among non-dominant OBCs, upper castes and Muslims. But while the caste profile of parties’ candidates has diversified over time, their economic profiles have become homogenised.

In the old days, typical MLAs would be lawyers, doctors, sometimes engineers or some other form of qualified professions. Most of them were upper castes, had a rural base, possessed land and usually declared themselves as farmers. Another category of MLAs would be drawn from the ranks of the old gentry, the big proprietors who survived the abolition of the zamindari system and could escape the land ceilings. The green revolution, coupled with land redistribution policies and much later the extension of the reservation system to OBCs, helped create new elites largely drawn from the dominant OBC categories. These new elites backed a party of their own – the Samajwadi Party. Recent surveys have shown that in 2014, the SP has managed to retain strong support among the dominant OBC groups, and the Muslims.

Today, these traditional socio-professional categories have been largely replaced by a new broad category of businessmen-politicians. Most of the successful candidates in the more urbanised constituencies have direct interests in the construction industry. Even at the local level, the individuals who dominate local political institutions tend to belong to the groups dominating the local economy – brick kilns owners, cold storage or transport companies owners. Many of the successful businessmen-politicians have crime records, which is not surprising given the rough business climate of the state.

At the same time, many criminal organisations or families have converted themselves into business ventures, using their extra-legal means to pursue business ends, sometimes expanding towards the political domain.

This evolution makes perfect sense when one considers the enormous resources needed to seriously contest an election. In many ways, businessmen in the 2000s have entered politics the way criminals entered politics in the '80s and '90s. They initially funded traditional politicians’ campaigns and then started funding their own campaigns.

Upper caste and dominant OBC businessmen-politicians tend to have more criminal cases against them, a marker of their dominating position. But that still does not explain why the SP has the worst reputation of the lot.

Parties draw their candidates from the same sociological pool of businessmen-aspiring politicians. But the way they relate to their candidates differ greatly. Most parties, beyond the first circle of faithful, outsource the business of winning seats to local political entrepreneurs who invest in politics in order to further their economic interests or the interests of their group.

This is particularly true for the BSP, which has to pick its candidates in general seats from among the local elites, and tie them up with the local Dalit population, in order to create winning coalitions. The relationship between the party and the candidates is utilitarian and does not require long-term affiliation with the party or even an adhesion to its ideology.  In other words, there is a division of labour between the Dalit party workers, who mobilise the local Scheduled Caste voters, and the candidates, whose business is to get the support of a fragment of voters large enough to win the seat when combined with the Dalit vote. In this context, misbehaving politicians are expendable and can be dealt with. Mayawati has a record of expelling troublesome BSP MPs and MLAs, sometimes even throwing them in jail.

The SP, to the contrary, depends far more from its representatives, as they not only tend to emerge from the local elites but also control the local party machinery. There is an integration of the party organisation and the candidates, which prevents the leadership from acting when some of the troops misbehave. This creates a sense of impunity among the representatives, who tend to be more "loose" under an SP regime than under a BSP regime, although they share the same profile.

The BJP tends to recruit its candidates more among the upper castes and the lower OBCs. But their economic and criminal profile does not fundamentally differ from the general candidates’ population.

The poor example posed by criminal elements within the political class contributes to the deterioration of law and order in Uttar Pradesh, and transmits a message of impunity that can encourage criminal acts. It also explains the insensitivity shown in the handling of particularly gruesome acts of violence.

Gilles Verniers is a political scientist at Ashoka University.