Contribute Now
Ad
Pakistan is a country obsessed with cricket: this is a place where cricketing metaphors doubled as election slogans in the last parliamentary election (“hum clean sweep kardeinge”), where the travails of the cricket board is invariably headline news, where every neighborhood has one – or three – street cricket teams arguing late into the night about whether that last ball really was a wide. This is a country where the memory of the World Cup semifinal loss at Mohali is still raw, where the current captain, Misbah-ul-Haq, is as divisive a character as any politician, where people still throw their TV sets out the window when Pakistan loses a match.

But there’s also a neighbourhood in Karachi where cricket isn’t an obsession. The residents of Siddiq Goth, in Karachi’s Malir district, don’t care about cricket. The boys aren’t debating whether Wasim was better than Waqar. Here, politics, friendship and money take a backseat to the event of the year: the football World Cup.

Siddiq Goth, a neighbourhood of ethnic Baloch men and women, has been transformed into a shrine to a tournament being held halfway around the world. It’s almost surreal. The boys of Siddiq Goth cheer on Argentina and Brazil, they hoist German flags from their rooftops. A screen has been rigged up in the local community centre; they’ve gathered money for a generator so they don’t miss a second of the games.

And there’s art: every wall bears homage to the neighbourhood’s favourite players and teams. There is graffiti portraiture of Messi and Neymar, German and Argentinean flags, an entire wall showing the World Cup groupings. I saw a lanky teenager studiously painting a logo, using an image downloaded on someone’s cell phone.

Noorain, a middle-aged Baloch woman, pointed excitedly at her son’s work of art, a flag of Argentina. “I’m happy when my son’s team wins,” she says. “Everyone here becomes brothers for their team.”

“Taaliyan!” yelled a kid, as she finished talking.

It felt like a film set. But there’s nothing “filmy” about the football fans of Siddiq Goth. There is little cynicism or bitterness, despite contending with a degree of unemployment. Kids in this neighbourhood grow up loving football over any other sport. Their fathers watch it avidly. Older boys in the neighborhood are perpetually kicking a ball around. They watch European club football too, but the World Cup is the biggest deal.

This is a longstanding passion amongst the ethnic Baloch community in Karachi. They’ve produced players who have played on the national team. They say there have also been talented players who ended up disenchanted with the corruption that besets Pakistani football and the lack of government funding and support. “You’re paid a pittance to play for the football national team. Look at how much cricketers get paid!” says Ali Nawaz Wali, a 30-year-old football fan. 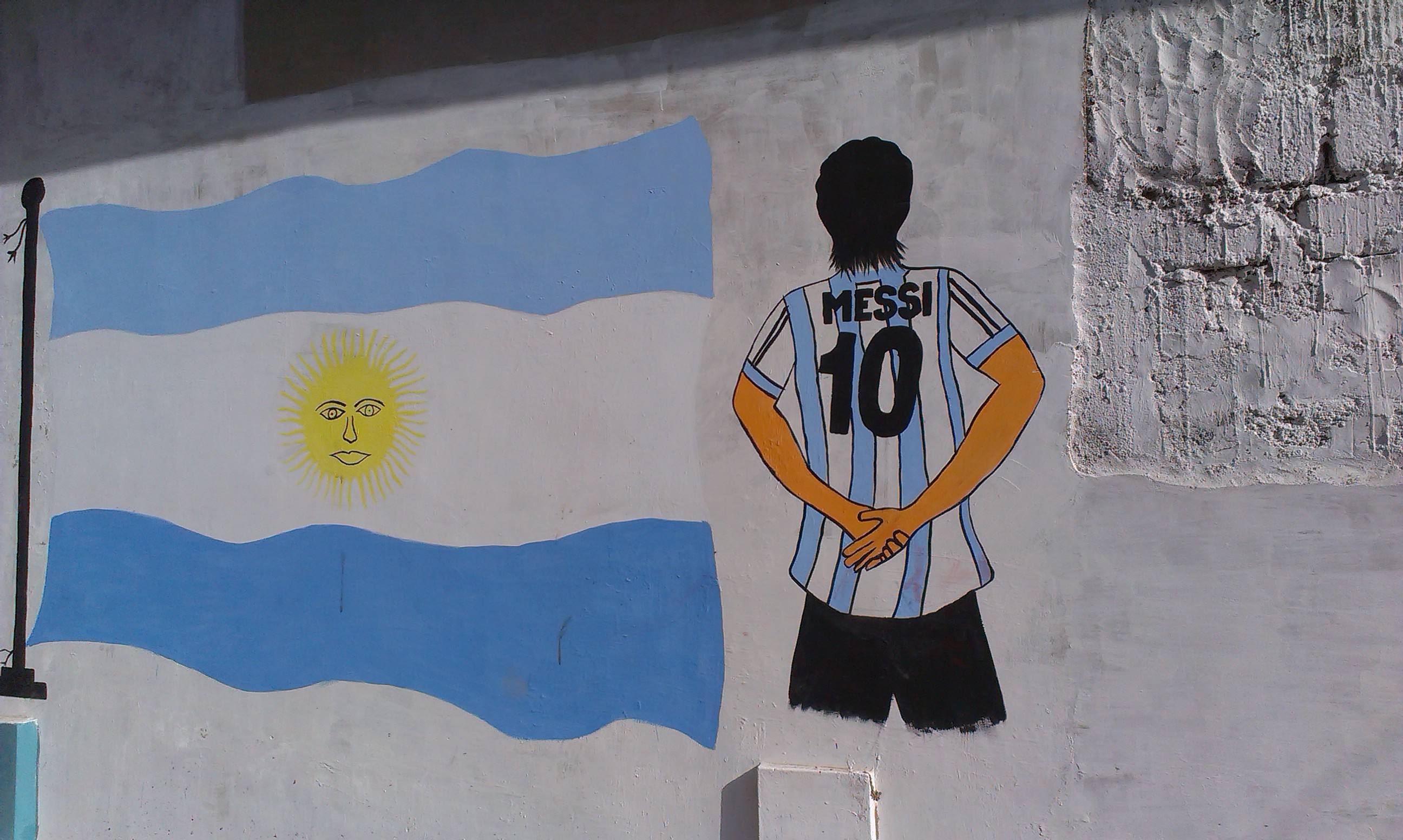 There are dozens of small football clubs in Baloch neighbourhoods. When I visited Siddiq Goth, the local Gul Baloch football club was prepping for a match that was to take place the next day. Ali Nawaz Wali pointed to the neighbourhood’s star striker as he walked to a tuition centre, books underneath his arm to study for an exam. He was studying though he had a match, Wali pointed out. “We’re like a family here,” Wali said. “We make our neighbourhood what it is.”

Tahir Baloch, the coach for the local Gul Baloch football club, is a fan of the Italian national team. “I’m 35, and I’ve been watching the game for as long as I can remember,” he said. “All of this will help the boys; they’ll get more spirit and enthusiasm. We have good players here. There’s more support for cricket in Pakistan, but if people supported football exceptional players could be produced.”

“There are more footballers here than people with an actual job,” Wali says.

The amazing wall art is just one of the things that make Siddiq Goth such a hub of football fandom. The neighbourhood is filled with all sorts of characters, including Mama ‘Brazil’ Sharif – who has named himself after his favorite team. He sells flags during the tournament. “The prices depend on how good the team is, not how big it is,” Mama ‘Brazil’ says, as he unfurls the flags while kids peek through the shop grille. 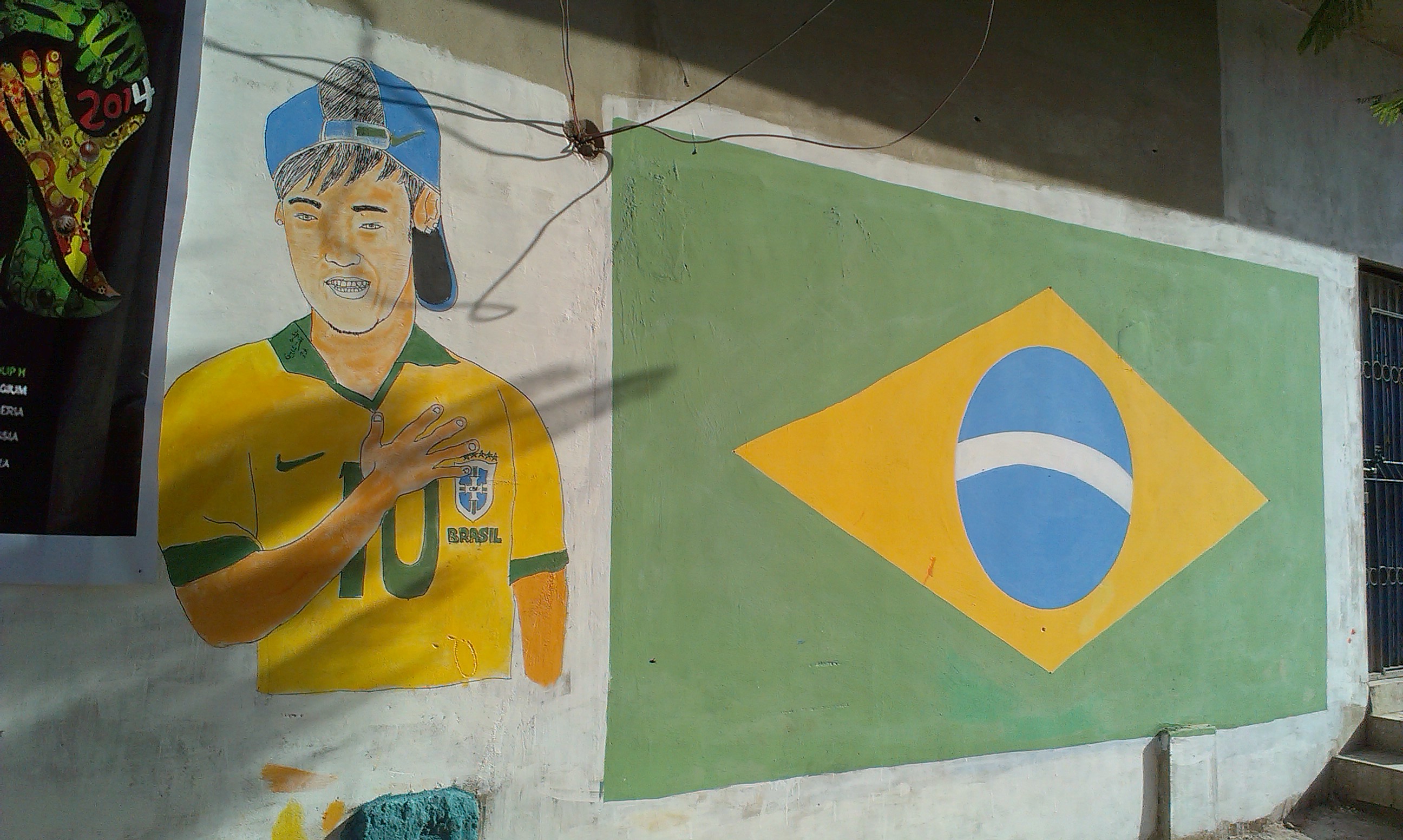 The young men of Siddiq Goth paint their neighbourhood for every World Cup. At night they get together to watch the matches at the community centre. Wali estimates they sometimes get a thousand people. What about the women? “The girls watch too, but at home,” says Yaqub. “Here it’s just boys.”

The men arrive an hour before the game, armed with flags of their team and sit on separate sides of the room, divided by team allegiance. When the power goes out – as it does at all hours during the summer in Karachi – they scramble to get the generator going. Despite the charged environment, fights don’t break out, though people do argue passionately about the merits of their favourite team. But the winning fans have a taunt for the losing side that’s as World Cup-themed as their painted walls: “Baro loga” – ”go home” in Balochi – sung to the tune of Shakira's “Waka Waka”, the ubiquitous anthem of the last edition.