Contribute Now
Ad
Every day last year, 371 Indians committed suicide, according to data released recently by the National Crime Records Bureau. That is, 1,34,799 Indians, roughly equal to the population of Trinidad and Tobago, killed themselves in 2013. That makes India’s suicide rate 11 for every one lakh persons.

Of the daily figure of 371 suicides, 248 were men; 89 of them ended their lives to escape “family problems”.

Looking at the state-wise distribution of the number of suicides in the map below, it is clear that suicide is more prevalent south of the Vindhyas. Despite having better economic indicators than northern states, Maharashtra, Tamil Nadu and Andhra Pradesh top the list, followed closely by Kerala. By contrast, suicides are the lowest in the poorest states of the Hindi heartland – Uttar Pradesh and Bihar. 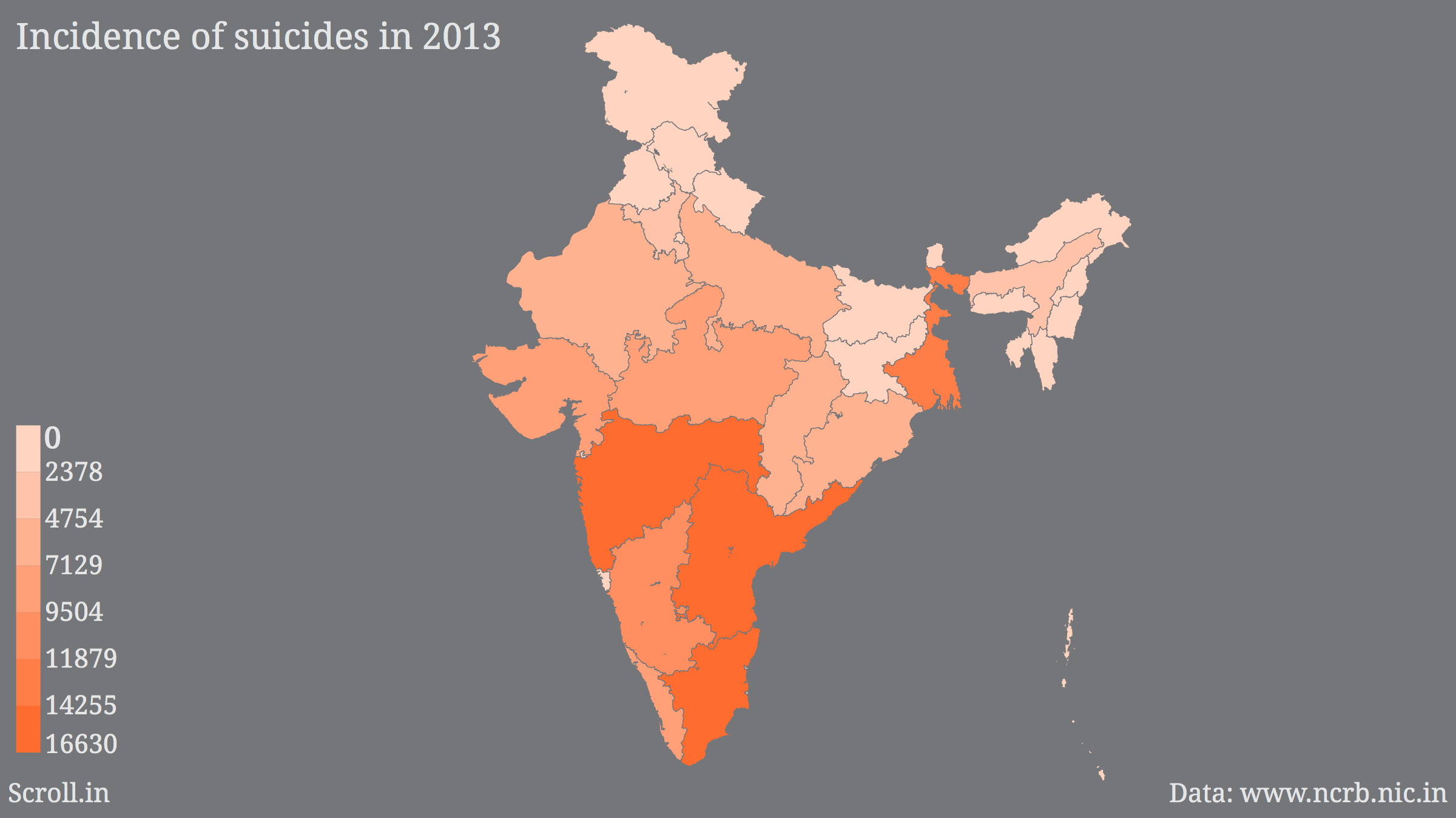 A better indicator of where states stand is the rate of suicide per one lakh population. In this, more-accurate metric too, the southern states clearly comes across as unhappier. The least suicide rate, only 1.1, is in the poor state of Bihar. 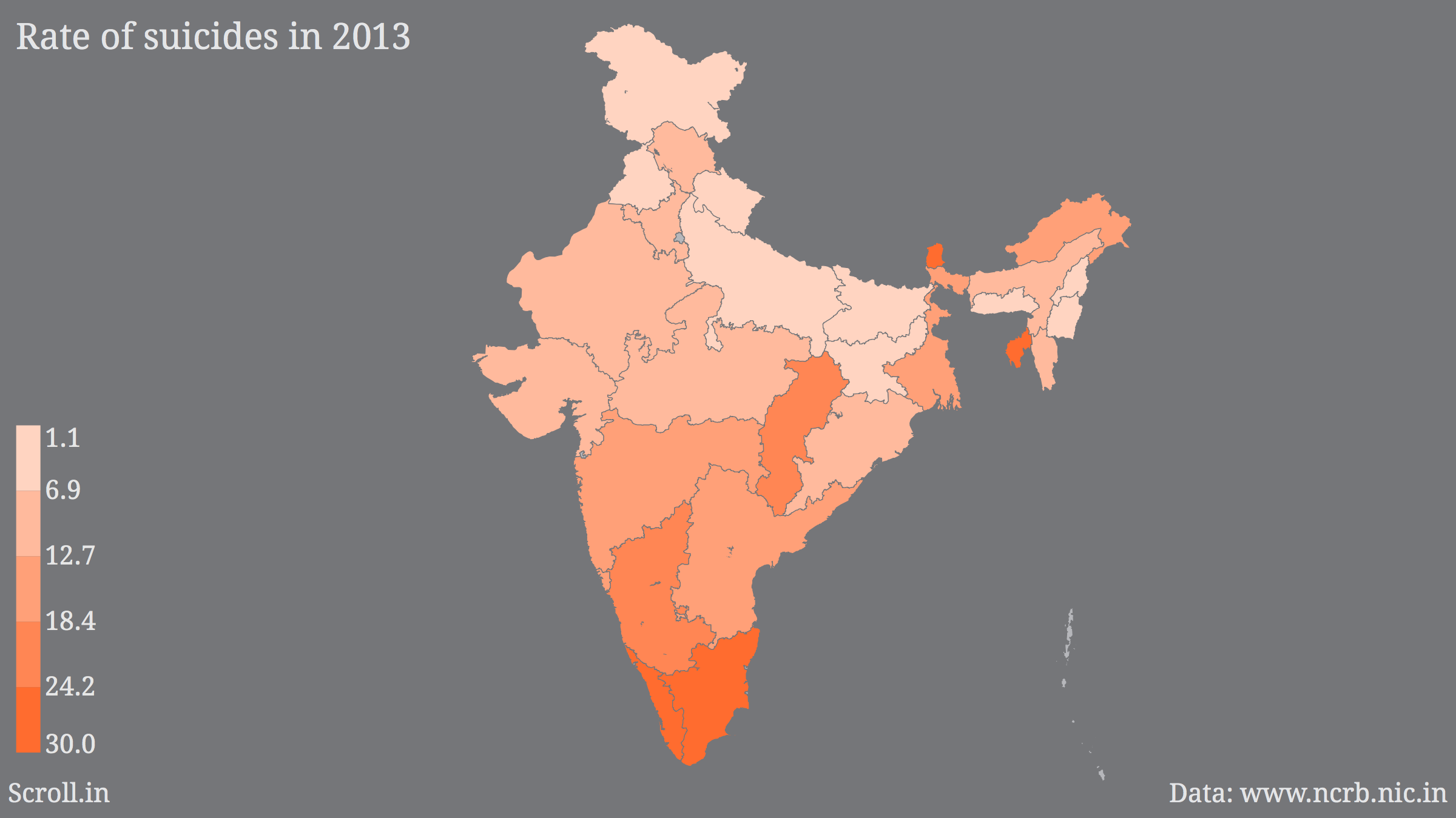 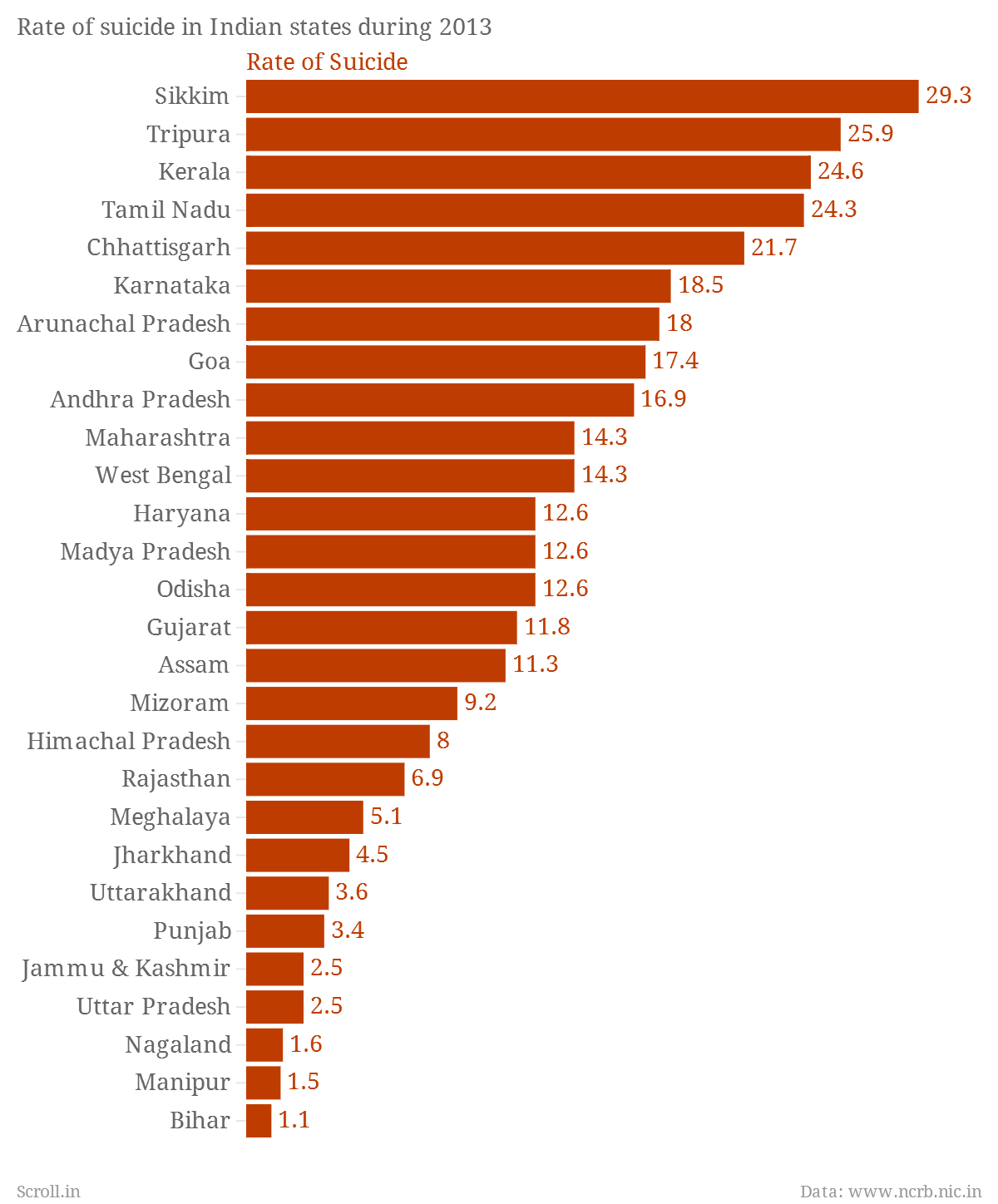 The highest rate of suicide is not in one of the states seen above, but in the union territory of Puducherry. Puducherry remains the suicide capital despite its rate having come down substantially from 44.8 in 2011 to 35.6 in 2013, still over three times the national average.

Puducherry is followed by Sikkim, the union territory of Andaman and Nicobar islands and then Tripura. Another union territory, Dadra and Nagar Haveli, has a high suicide rate of 21.4, almost double the national average.

Amongst the major cities, the highest rate of suicides, an alarming 65.9, was in Asansol in West Bengal. 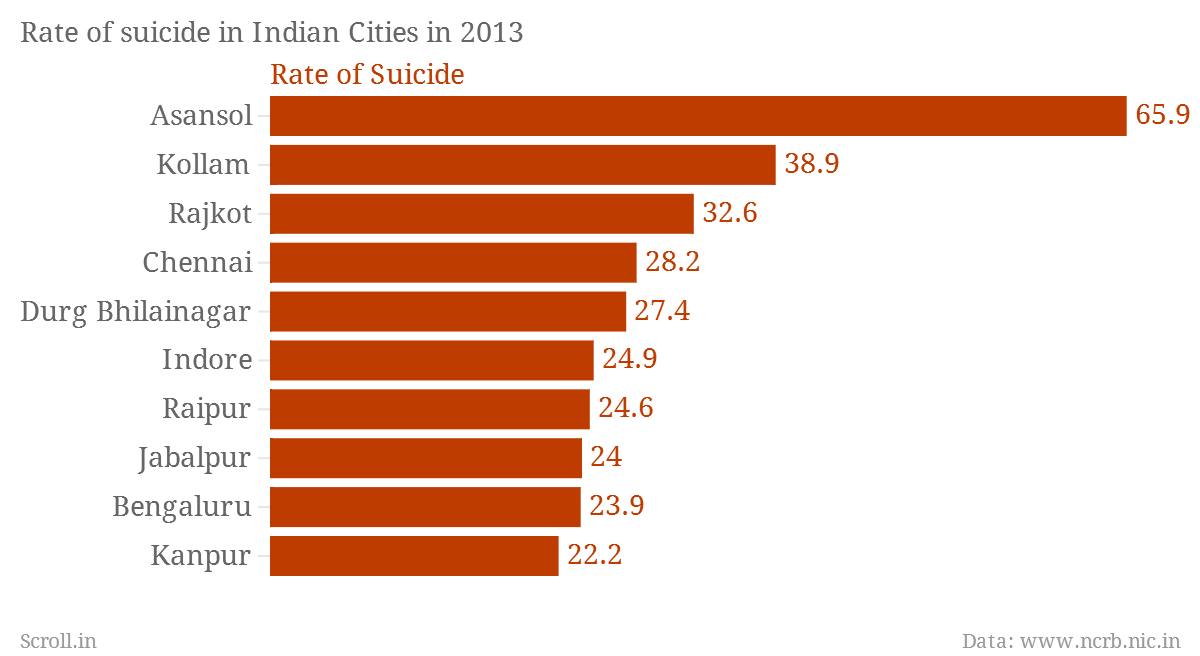 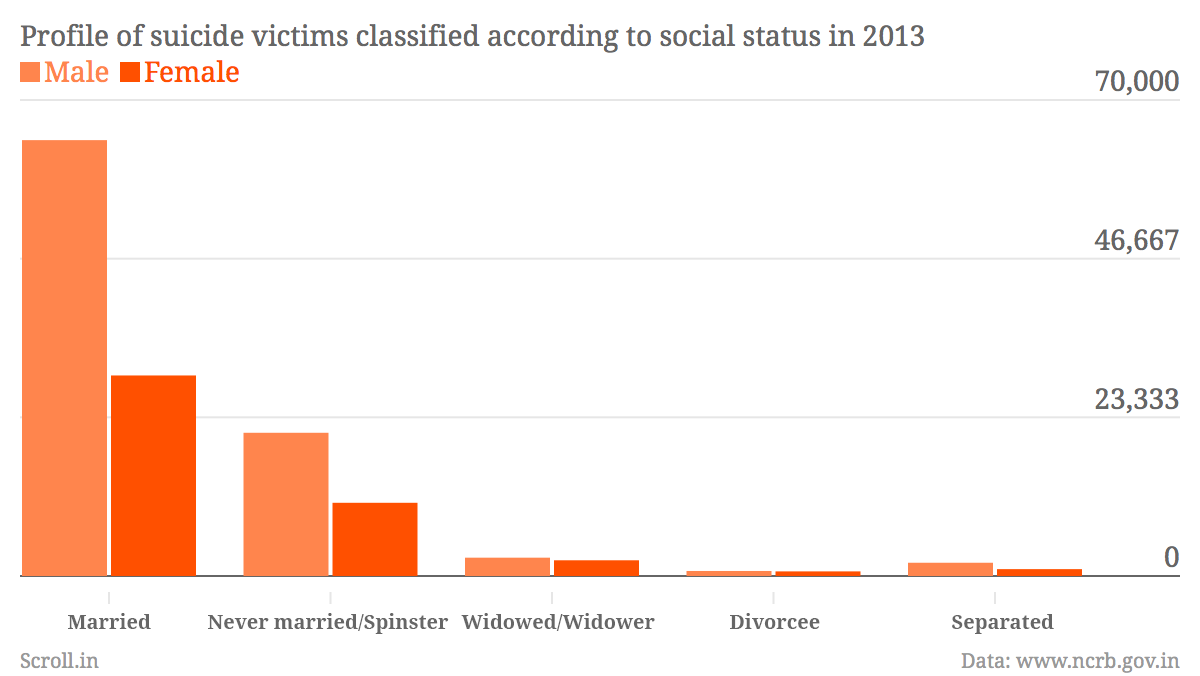 Why do people commit suicide? The biggest reason is “family problems”, though almost equally responsible is illness. 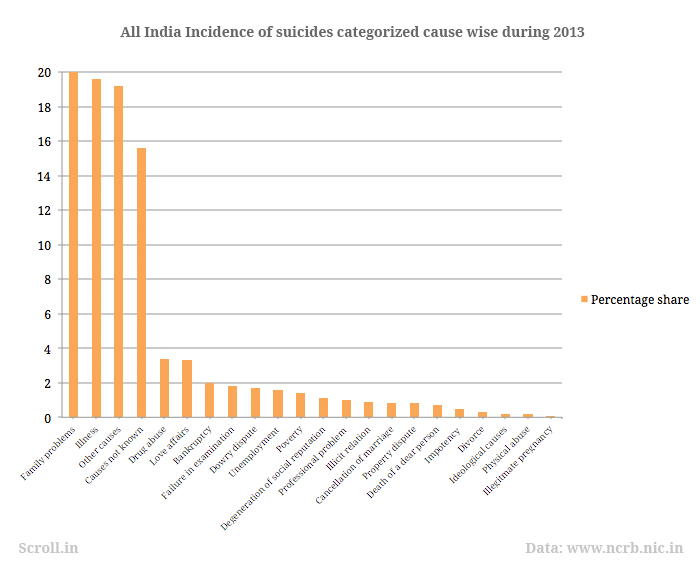 There are more spheres of life where India is seeing turbulence. In small numbers, but a significant rise over the previous year, there has been a sharp rise in suicides due to “illegitimate pregnancies” (up a staggering 64.51% from last year), “fall in social reputation” (up 49.4% from last year) and “professional/career problem” (up 40.81% from last year).

Hanging seems to be the most popular means of committing suicide, followed by poisoning, which was the favourite earlier. This is a trend that is relatively recent. Since 2011, hanging has become the most preferred method and the gap has only been getting wider. 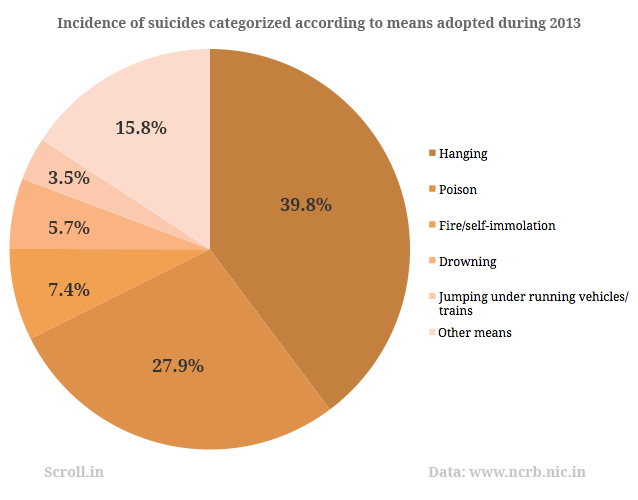