Contribute Now
Ad
What happened to film journalism? When precisely did we leap from writing intelligently about our wonderfully broad range of cinema and settle on the torrents of PR-supplied interviews we are fed everyday? The daily magazine sections of the mainstream newspapers are most culpable in this, sacrificing the basic tenets of journalism as they dance to the tune of their paymasters.

But it’s not only the readers who suffer. Because so many of our film journalists have abrogated their responsibilities – asking the hard questions, pushing the awkward buttons, getting to the bottom of stories – our film actors and actresses now operate in that rarefied space where they’re never presented with a reality in conflict with their own. Everything shines in la-la land.

An unsuspecting Priyanka Chopra received a taste of the big bad world of social media when she decided to do an AMA, internet shorthand for ask-me-anything, on the social networking website Reddit on Wednesday. Accustomed to answering, or rather dodging, an unending stream of inane questions about her love life, Chopra was caught off guard when faced with serious interrogation of her film and music career.

It seems when the denizens of the internet think of Chopra their minds do not turn to her schooling in the US or her views on homosexuality or the latest love in her life. The internet wanted her to answer tough questions about the regressive thought structures and practices that still plague the film industry. Reddit users showed no fear or favour, bombarding her with questions that would have had any PR team resigning on the spot.

“You keep promoting fairness products for people to look like you. Why is it subhuman to be dark skinned?”

“What contribution has your father made that a road was renamed after him and not after countless other people who strived and died for India?”

“What is your opinion about Bollywood directors blatantly ripping off international movies and getting upset that their movies are not accepted at international film festivals?”

“How important is auto-tune in your singing career?” 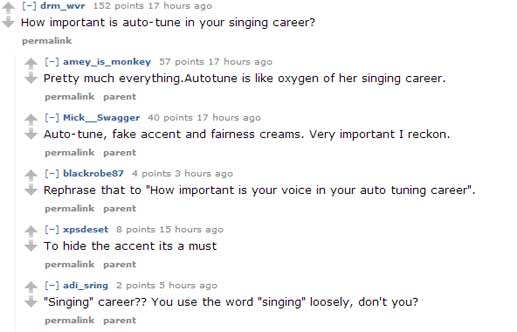 True, there were several questions and comments that would qualify as merciless, even patriarchal trolling – lewd comments about her friendship with Pitbull and inappropriate jokes about her relationship with her father. There were, however, many that finally broke down the idea that celebrities must be cosseted and pampered that so many in the mainstream media adhere to.

“Have you seen The World Before Her? You were a beauty queen before you became an actress. Do you think beauty pageants are a bad influence on society, in that they set unrealistic benchmarks and standards for society at large?” asked one user.

It’s hardly surprising that Chopra chose to not answer any of these questions and instead left us with inane wisdom to ponder over. Neither is it shocking that Reddit users grabbed the opportunity to put sensible questions to a celebrity for once. One has even filed an RTI seeking an explanation about the road being renamed after Chopra’s father – an answer was not forthcoming from Chopra.

Ill equipped to handle questions that matter, celebrities have been spoilt as a result of the mainstream media’s reluctance to do their job. Television and print media have succumbed to the tempting option of passing off giggling, scripted interviews as film news. Questions revolve around the celebrity's celebrity-hood, tip toeing cautiously around what are considered delicate areas, such as politics or plagiarism, while plunging with merry abandon into questions regarding love lives and pets.

But as Chopra’s disastrous experiment proved, while reporters might not be aware of the surely shifting status quo, most others are. Questions will be asked, answers will be expected. Stars might still dazzle, but they no longer daze.

At ‘Befikre’ song launch, Ranveer Singh is full of beans, kisses and one-liners