Jul 07, 2014 · 08:30 am
Sumana Ramanan
By the early 20th century, Girgaum, a locality in south Mumbai, had developed into a lively hub for Hindustani classical music, with its performance halls becoming among the country’s most prestigious concert venues.

Such was the demand for concerts from this precinct’s discerning listeners that independent organisers would sometimes unknowingly schedule recitals of two top popular singers at the same time in nearby venues.

Such occasions gave rise to people called “runners”, whose job it was to dart between one concert venue and the another, reporting the progress of each recital to the audience in the other hall so that people could evaluate which performance might catch fire, and decide whether to jump ship.

This is one of numerous stories that Bangalore-based scholar Tejaswini Niranjana heard during her research on Hindustani music in Mumbai, many of which illustrated the ardour of the city’s listeners for the music form. She heard this particular story from Girgaum resident Nitin Shirodkar, who in turn had heard the story from his guru Pandit Feroz Dastur of the Kirana gharana, who passed away in 2008.

“Through my research, I realised that without Mumbai, Hindustani music would not have survived the way it did,” said Niranjana, a senior fellow at the Centre for the Study of Culture and Society in Bangalore, who presented her research in Mumbai on June 27.

Niranjana became curious about Mumbai’s role in the development of Hindustani music in 2011, when she was listening to tapes of interviews she had done with Gangubai Hangal before the singer's death in 2009.

Niranjana had interviewed Hangal for research she was then doing on the emergence of Hindustani music in northern Karnataka in the early 20th century, a region that has produced giants such as Hangal, Pandit Bhimsen Joshi and Pandit Mallikarjun Mansur, to name just three singers from one generation.

Niranjana noticed that in the interviews, the great Kirana gharana singer kept talking about Mumbai and of the regular trips she made there. So in 2012, Niranjana set out to understand the role of Hindustani music in colonial and post-colonial Mumbai, starting from the mid 19th century to the present.

This research combined her fascination for Mumbai, where she did her Masters and where she has been spending a week every month for about eight years, and her love for Hindustani music, which she has been learning for a decade, from Mumbai-based Gwalior gharana singer Neela Bhagwat.

The relationship between Mumbai and Hindustani music has surprisingly not attracted the attention it warrants, with notable exceptions. Mumbai-based tabla maestro (and Scroll.in contributor) Aneesh Pradhan in some ways pioneered the study of this subject, with his 2002 history doctoral thesis on Hindustani music in colonial Bombay, which he has updated in his forthcoming book, Hindustani Music in Colonial Bombay, published by Three Essays Collective.

Others who have explored this subject are journalist Namita Devidayal, in her gem of a memoir, The Music Room, published in 2007, which gives readers a glimpse into a milieu that enabled the Jaipur gharana to thrive and grow in Bombay, and Bangalore-based musician Lalit Rao, who last year presented a history of the Agra gharana, interspersed with her students’ performances, devoting a long section to how the gharana flourished and expanded in Mumbai.

As a cultural theorist of the contemporary, Niranjana, however, set out not to write a narrative history of Hindustani music in Mumbai but to explain why it was able to take such deep roots in the city and how it then influenced the character of the colonial and post-colonial metropolis. “I am looking at the past in order to understand the present,” she said.

Niranjana did archival research for the early decades of the period she was looking at and interviews with living musicians for the latter part, 20 of which Mumbai-based filmmaker Surabhi Sharma has shot and uploaded on the online archive pad.ma. Niranjana's research so far ends at 1950, but she will continue to work to bring the story to contemporary Mumbai.

Niranjana will write up her findings in the form of an e-book and also create a digital multimedia archive to which she will keep adding and invite others to do so as well. “This time, I decided that I could not do the conventional academic writing,” she said. “The material called for an open-ended format with multiple layers.”

Music and the metropolis

In the mid-19th century, the point at which Niranjana begins her story, the princely states were becoming important patrons of Hindustani music, following the popular uprising against the British in 1857 and the disintegration of the Mughal empire. At the same time, private enterprise was gathering steam, giving rise to markets, the epicentre of which was Mumbai.

Along with these pan-Indian changes that had their unique Mumbai manifestations, around the 1860s, several developments specific to the city contributed to producing conditions that were conducive to attracting Hindustani musicians to the city and creating serious audiences.

It was a time when a professional entertainment industry began to develop in the city in the form of what came to be known as Parsi theatre (although it included a range of communities) and the Marathi sangeet natak, both of which heavily used music.

Parsi theatre drew on Persian and Hindu mythology for its dramas, while the sangeet natak was influenced by Marathi folk traditions such as lavani and tamasha. But both integrated light classical forms, such as dadra, hori and thumri, into their productions, with the Marathi sangeet natak gradually also drawing heavily on classical raga-based music. As a result, both theatres employed several ustads and pandits to train their singers.

Second, it was also the time when courtesans from Mughal courts, known as tawaifs, and former devadasis called naikins, moved to cities, including Mumbai, as the old systems of patronage broke down. These women often encouraged musicians and hosted them whenever they came to the city.

The naikins, who were from kalawant, or hereditary musician families, in Goa, became prominent singers in Mumbai, as they found patrons among the Gujarati seths. Kesarbai Kerkar and Mogubai Kurdikar were two of the most famous of them.

Three brothers who founded what came to be known as the Bhendi Bazaar gharana, named after a locality in Mumbai, alone trained 60 naikins, Niranjana said. The brothers came to Mumbai from Moradabad, Uttar Pradesh, in 1890.

These Hindustani singers began to teach not only professional singers in the two theatres, but also members both of a rising mercantile class and an emerging middle class with disposable incomes. The art form soon became deeply entwined in the city's culture.

The rise of both the mercantile and middle classes created a marketplace for music that generated financial opportunities for singers in the form of concerts and recordings. Many singers began visiting the city in order to perform and to record their music, as was the case with Gangubai Hangal, who came so often that she rented a house in Girgaum.

Abdul Karim Khan, who founded the Kirana gharana (named after his native town in Muzzafarnagar in Uttar Pradesh), was employed for several years by the princely ruler of Meeraj in southern Maharashtra. But he also began visiting Mumbai, and was among the earliest Hindustani classical singers in India to have had a ticketed concert, said Niranjana.

For all these reasons, Mumbai became a central place for Hindustani music, as opposed to other cities such as Delhi, which was essentially a place of government, and Kolkata, which was by then a declining colonial city, although it too attracted a number of musicians, many of whom followed Wajid Ali Shah, who moved there from Lucknow after the 1857 uprising.

Performances in Mumbai took place in a range of spaces, from prestigious venues, such as Trinity Club, Lakshmi Baug and the Brahmin Sabha, to courtyards of chawls – unique Bombay structures designed for communal living – and bhaitaks, performances in the living rooms of the wealthy patrons. Besides Girgaum, Dadar, in central Mumbai, was another hub for this kind of activity. 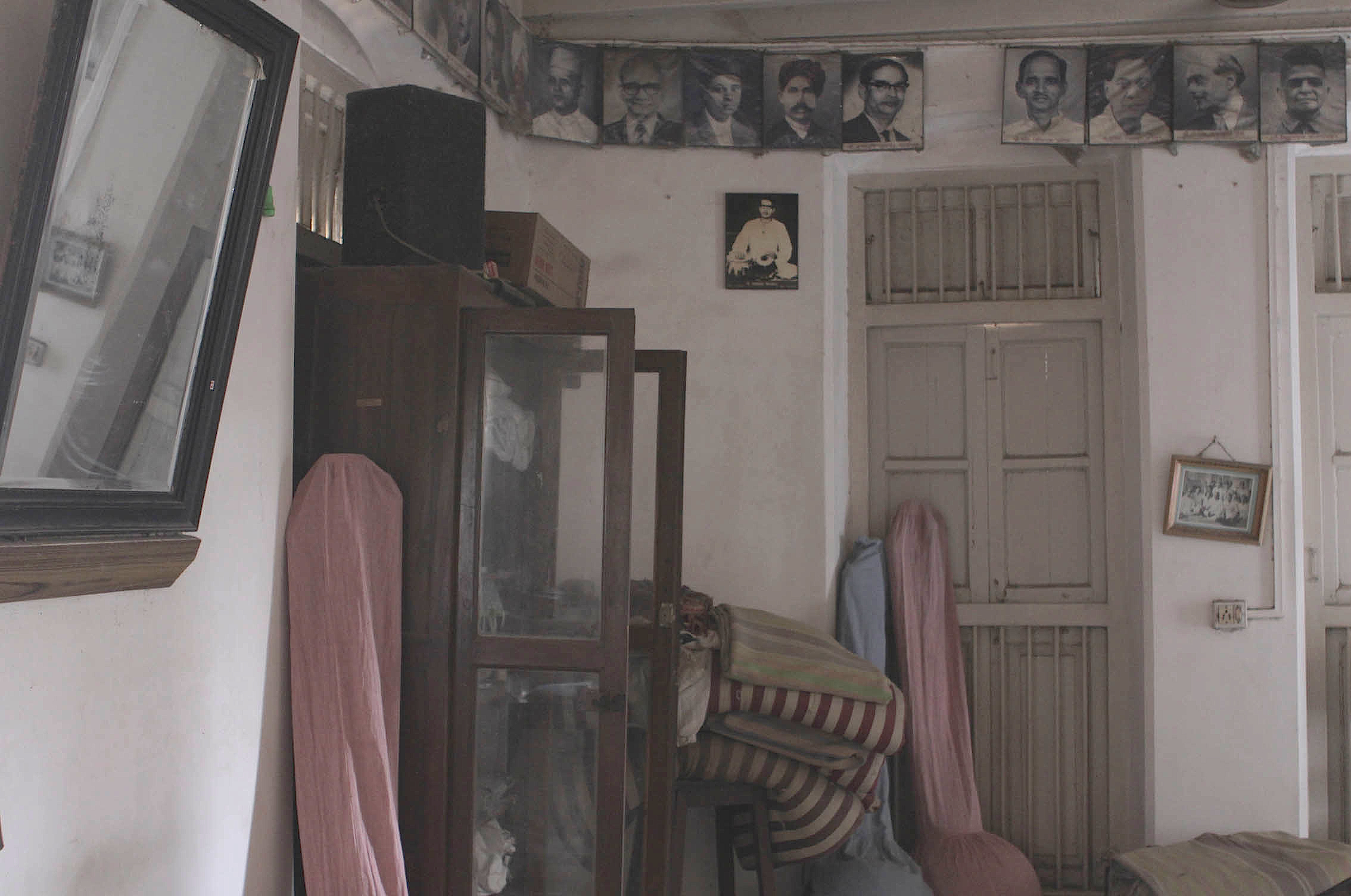 The Trinity Club, one of the most prestigious concert venues in the early 20th century. Photo: Nikhil Akolkar


“A love for Hindustani music brought diverse kinds of people together, contributing to how a sense of the public developed in Mumbai, which was very different from the way it developed in the West,” said Niranjana.

Hindustani music influenced the city's culture in another, important way: It was likely to have played a role in making Hindustani the main medium of communication for the city’s heterogeneous population, she said.

Hindustani was the language of its film industry and indeed even its Parsi Theatre, which, in the 1870s, just a decade after emerging as a vibrant entity, switched from using Gujarati to Hindustani, leading some people to call it the Urdu Opera.

That this happened even though at no time during Mumbai's history did native speakers of Hindustani comprise more than 12% of the population, said Niranjana, was remarkable.