Contribute Now
Ad
Going by incidents of rioting, the Manmohan years were the most peaceful, according to National Crime Records Bureau data, analysed by Scroll.in. By contrast, Indira Gandhi's record on riots was the worst for India.

Looking at this data, it is clear that periods of transition at the Centre see increased rioting in the country, even though law and order is a state subject.

Reassuringly, the most violent phase in terms of mass violent agitations and mass inter-community violence may be behind us. Until 1995, every year from 1969 had recorded 10 or more incidents of rioting per one lakh population.

These riots are not only Hindu-Muslim riots, but any violence that may have attracted sections 143-145, 147-151, 153, 153A, 153B, 157, 158, or 160 of the Indian Penal Code. Rioting is defined in section 146 of the Code: "Whenever force or violence is used by an unlawful assembly, or by any member thereof, in prosecution of the common object of such assembly, every member of such assembly is guilty of the offence of rioting."

Data for years before 1953 and after 2011 was not immediately available, but we know that 2013 and 2014 saw an increase in at least the number of Hindu-Muslim riots. Political scientists have long theorised that riots in India are an effect of elections. That is borne out by the charts below. 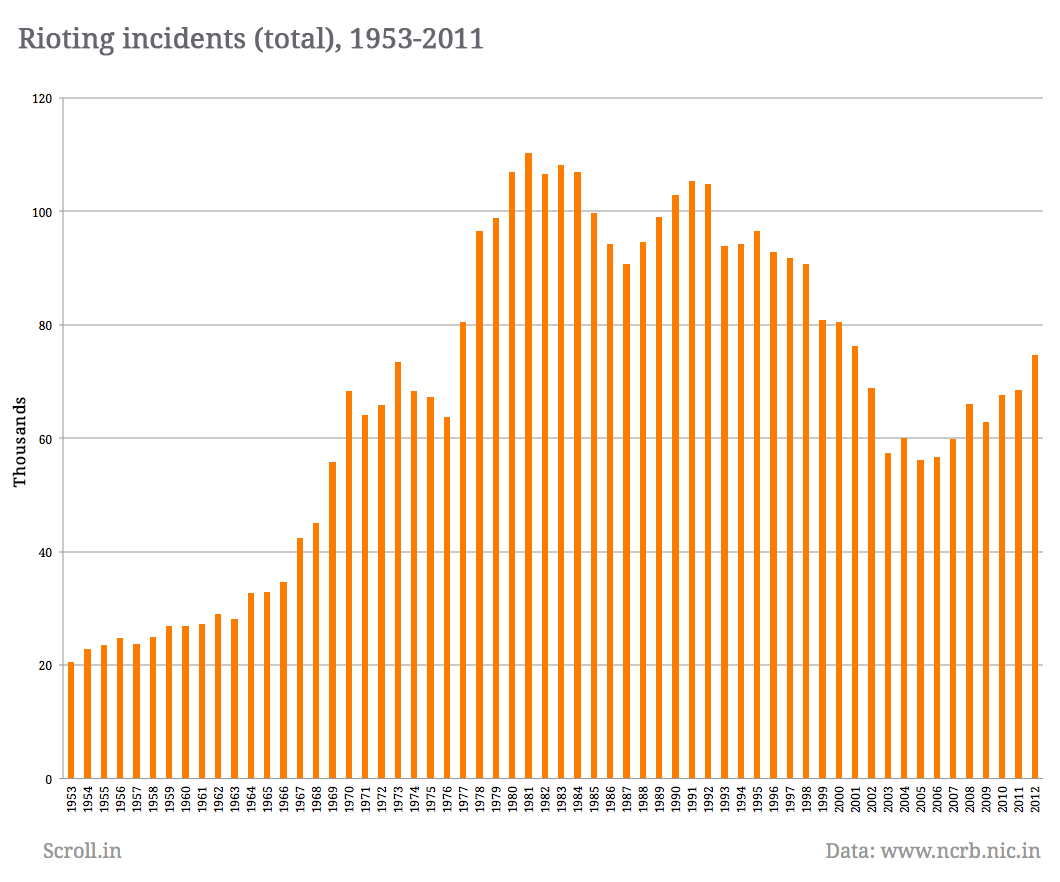 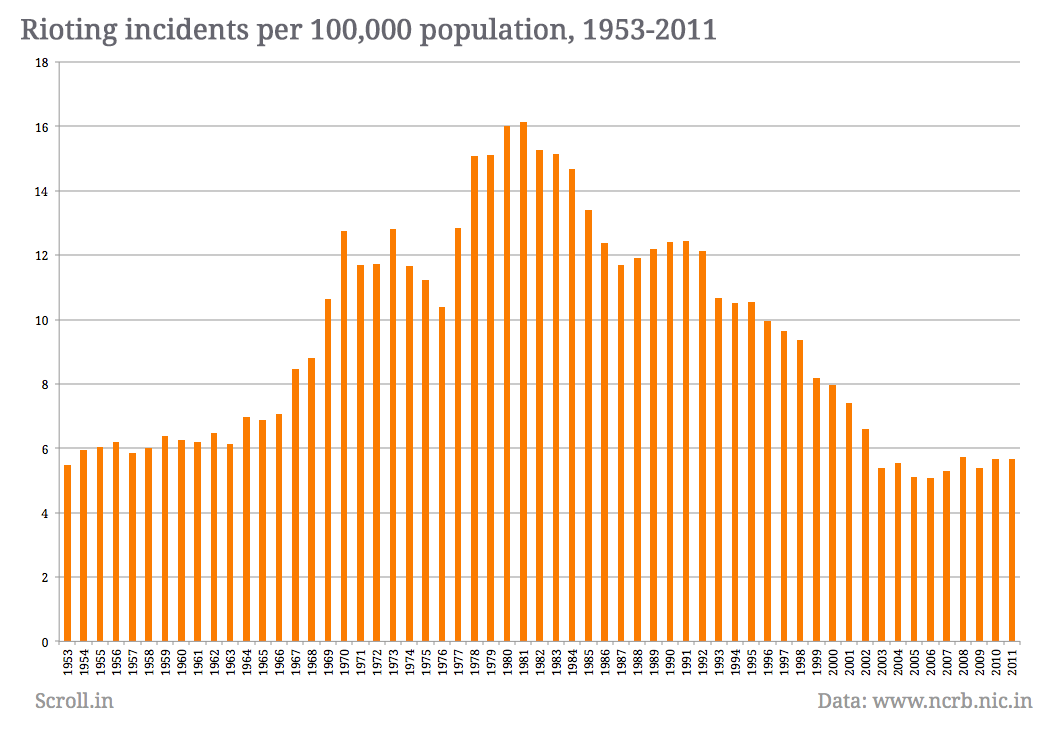 The period from the late 1989 looks very violent if measured by the number of incidents. Yet, if normalised by population, the period looks less violent, and the early '80s stand out even more starkly. The '70s and '80s were a period of great upheaval in India: the Jayaprakash Narayan movement that was followed by the Emergency, Indira Gandhi's return to power followed by insurgencies in Punjab and the North East.

A sharp increase of 16% in the total number of incidents in 1964 took the riot rate to near seven per one lakh population. This was the year Nehru died and Lal Bahadur Shastri took over as prime minister.

In 1967, which marked the fourth Lok Sabha election and the first time the Congress was contesting under Indira Gandhi's leadership, there was a steep rise of 22%. In 1969, there was a 24% increase over the previous year. This was the year Gujarat saw large-scale riots, and the Congress party split into two, one faction led by Indira Gandhi and another by Morarji Desai.

Morarji Desai became the first non-Congress prime minister as the Janata Party came to power in 1977, after the Emergency was lifted. That year saw by far the largest percentage increase in a single year: 26%. The following year saw another 20% increase, taking the riot rate above 15 for the first time.

The year 1984, when Indira Gandhi's death was followed by a pogrom against Sikhs in Delhi and other cities, actually saw a 1% decrease in the over-all number of incidents. The following year saw a significant 7% decline. As the Rajiv Gandhi years seem to have begun seeing relative stability, the riot rate reduced to 12.6 in 1989, despite a 5% overall increase in that election year.

The Mandal agitation and the Babri Masjid demolition resulted in violent upheaval, but the overall number of incidents increased only marginally with VP Singh, Chandra Shekhar and PV Narasimha Rao at the helm.

Just after the Babri Masjid fell, 1993 actually saw a 10% decline in the number of incidents. The riot rate came down to 10.63. Thereafter, there was minor increase or decrease until 1999, when it again fell a substantial 11%. This was the period of the unstable coalition era. In the year 1999, Atal Behari Vajpayee returned to power in the elections held just after the Kargil war.