Contribute Now
Ad
Bankim Chandra Chatterjee  wrote the poem Bande Mataram in 1875. He was 37 years old at the time and worked as a deputy collector in the British Government. His poem was probably an Indian answer to the British national anthem, God Save The Queen (or King, depending on who was ruling).

In the poem, Chatterjee described the nation as the mother. It was heavily criticised by his daughter and friends because it had difficult Bengali and Sanskrit words. But Chatterjee responded by  saying, "I have written this spontaneously. I may not live to see how it is received, but this poem will be sung by every Indian like a mantra in the Vedas."

He included the poem in his novel Anandmath, published in 1882. In 1896, two years after Chatterjee died,  Rabindranath Tagore recited the poem at the Indian National Congress's annual convention in Kolkata. The tradition of singing Vande Mataram (as it was pronounced in Sanskrit) at Congress conventions continued, and even today it is sung at the beginning of Lok Sabha and Vidhan Sabha sessions.

In 1907, Hemendra Mohan Bose, the first Indian to manufacture gramophones, the earliest devices that recorded sound and played it back, recorded Tagore singing the poem on a phonograph cylinder, the first commercial media for gramaphone recordings. 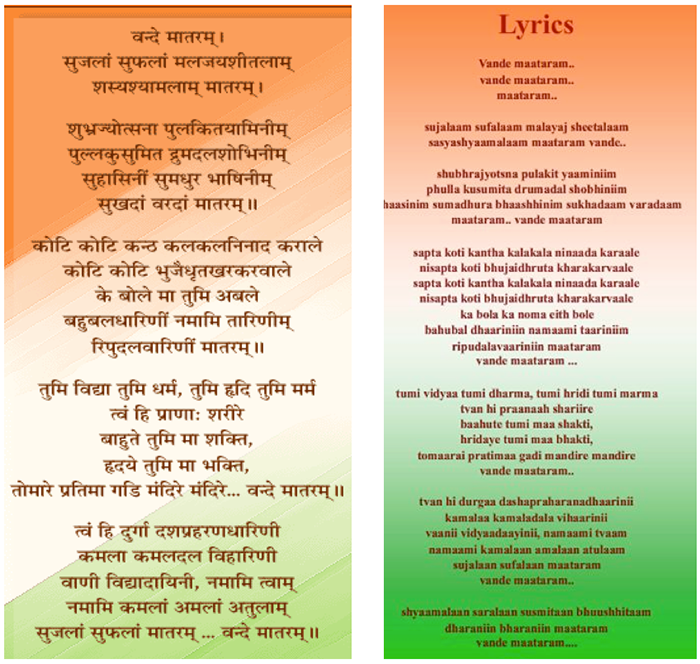 This version is set to raga Desh-Malhar and sounds like a religious chant sung during wedding ceremonies. 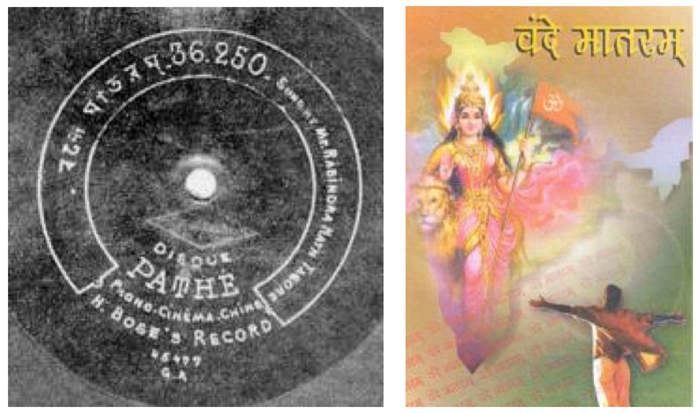 Two more recordings from the years 1906 and 1907 are available. Narayan Chandra Mukherjee sings it in a high pitch, in a style that seems to combine the slow waltz with the more vigorous tappa, a north Indian light classical form. They are accompanied by a harmonium.

Satyabhushan Gupta sings the poem in the same raga and tune, but the style is akin to that of a lullaby and the accompaniment is a clarinet.

The song was often sung and recited at public functions and literary meetings in Kolkata and was also included in some dramas.

During protests against the partition of Bengal, which the British effected in 1905 for both administrative and political reasons, Vande Mataram became an inspiring song for many Indian revolutionaries. Soon, it became a protest song in India's long struggle for independence.

But some Muslims found the song objectionable because they felt worshipping a mother was a polytheistic practice and more generally because they found the poem's other cultural impulses to be Hindu.

For several years until 1925, Pandit Vishnu Digambar Paluskar, the great Hindustani classical singer, used to sing it in Raga Kafi at the Congress's annual convention. He would sing all the stanzas with instrumental accompaniment and all the members of Congress would stand at attention for several minutes. Thus, it became the Congress party's anthem.

On one occasion, Paluskar was travelling and was not sure whether he would reach the venue of the Congress convention in south India in time to sing. He had someone get in touch with Ustad Abdul Karim Khan, who had a concert in a nearby city, to request him to sing the song. Khan readily agreed, but added, "This is the Paluskarji’s forte and right. I will sing it only if he can’t make it."

In the end Paluskar did arrive in time to sing it. After 1925, his student, Pandit Omkarnath Thakur, took over and also chose to sing it in Kafi, but added the word Bangiya to the name of the raga, referring to Bengal, from where the poem originated.

In the year 1937, during the meeting of the Congress Working Committee in Kolkata, its members decided to cut short Vande Mataram to the first stanza with the sole aim of not offending some of the Muslims present. But those Muslims were not satisfied with this because they wanted to eliminate the song completely from the conventions. The Muslim League chairman, Mohammed Ali Jinnah, raised an official objection on March 17, 1938, to even the first stanza being sung. Thus, the song became politicised.

In 1937, in many regions of British India, the Congress came to power during a brief colonial experiment in granting a measure of autonomy to the provinces. At this time, in deference to Muslim sensitivities, the Congress government banned Vande Mataram from being aired on the radio.

The musician and singer Krishnarao Phulambrikar protested against this ban for several years, declining to sing for the radio. "If there is no Vande Mataram on the radio, then no song of mine will air on it either," he said. After Independence, the ban became irrelevant, and in 1947 on Gudi Padva, the Maharashtrian New Year that falls on the first day of the Hindu month of Chaitra, Master Krishnarao, as he was called, gave a radio concert that concluded with Vande Mataram.

Eventually, just the poem's first stanza was sung at Congress conventions, without instrumental accompaniment. This caused lot of heartburn among people who wanted it to become independent India's national anthem. Many musicians resolved to set tunes to this poem. As a result, over the next ten years, many versions of Vande Mataram were composed and presented to the public.

This is Part 1 in a series on the history of patriotic songs.