Become a Member
Ad
Let us state at the outset that the main reason cited to explain the outburst of violence in western Uttar Pradesh in recent weeks is ludicrous. Anyone who has travelled extensively in UP, particularly around its Hindu or Muslim pilgrim towns and cities and in its highway dhabas, has lost by now a few percent of hearing capacity due to the blast of loudspeakers – the said loudspeakers usually blasting to the general indifference of the local population.

What is far more worrying is the potent mix of minority stigmatization and concerns – both legitimate and fantasised – for the safety of women. Minor local incidents have been labelled as communal. This has been backed by baseless rumours aimed at blaming a single community for the threats to women.  This is an extremely perverse way to both stigmatise a minority and polarise social groups.

Political parties have quickly been accused of fuelling and exploiting these incidents in view of the by-elections to 12 assembly seats due on September 12. It is well understood that parties instrumentalise violence, caste-based or religious-based, for political gains. In August 2013, in the run-up to the Lok Sabha election earlier this year, the Bharatiya Janata Party experimented with a strategy to polarise voters in Muzaffarnagar, aiming to break a decade-long political alliance between the Jats and the Muslims. Contrary to the 1990s' religious mobilisations, the aim here was not to build an elusive and fictitious “Hindu vote block” but to create a rift among the alliance that had enabled the inheritors of Charan Singh to dominate this area.

It isn’t clear who exactly drew sword first in Muzaffarnagar but what is known is that the initial incident was local and politically insignificant. Not that cases of harassment or traffic incidents do not matter but they do not, in normal circumstances, degenerate into collective retribution against the group to which the protagonists of the incident belong. The violence that followed resulted in the deaths of at least 62 people (42 of them Muslim) and forced an estimated 50,000 people to flee from their homes.

By making sure that no member of the local dominant community would vote for Muslim candidates, the BJP actually fragmented the electorate at the right spot, and bagged the benefits in the absence of credible alternatives. The strategy worked in the Lok Sabha elections. That can be seen from that fact that the vote share density of the BJP in Western UP – both urban and rural segments – was as high as in the state’s cities, where the BJP has traditionally been strong. 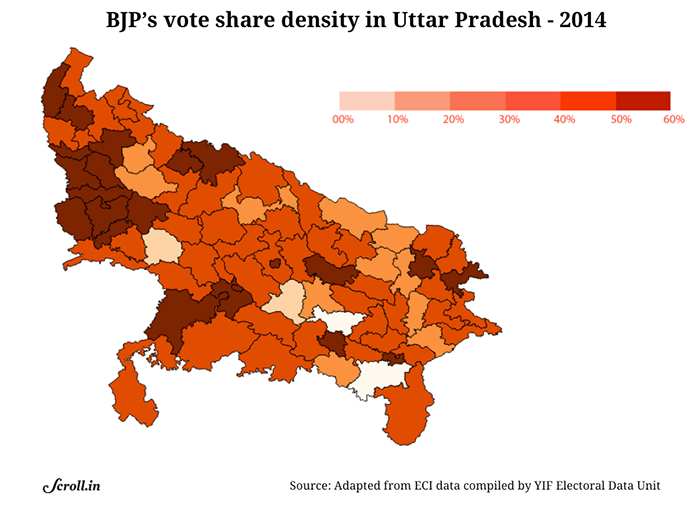 The strategy worked in other areas as well. The fragmentation of the non-BJP vote was such that the saffron party was able to get more votes in 22 seats, essentially urban, than the total votes received by its three opponents combined. These urban seats usually have a sizeable Muslim population. 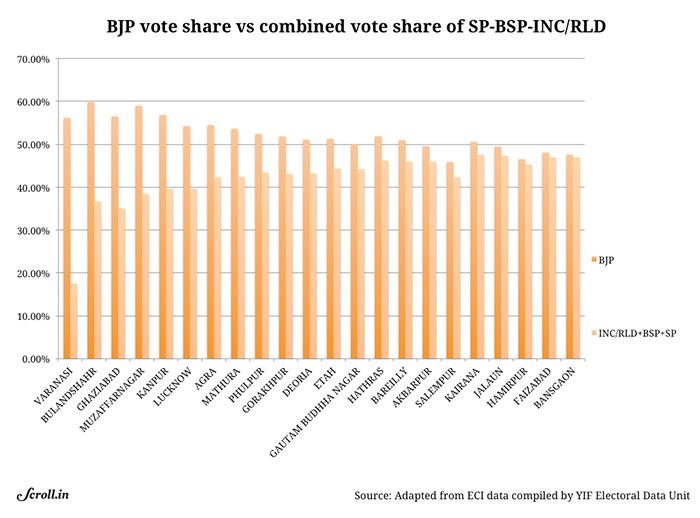 It would seem logical therefore that the next step should be to replicate this successful strategy to other areas soon going to the polls. Recent reports have highlighted the fact that a good share (about 10%) of the recent violence in western UP involves Dalits and Muslims, predominantly in areas that are going to by-election polls in September. This is not surprising, since local Dalit-Muslim alliances have recently helped the Bahujan Samaj Party to rise to power.

Generally speaking, the BSP rose by forging alliances between the Dalit voters and candidates carefully selected from the ranks of the local dominant groups. In 2014, the BJP campaign neutralised this strategy, as few members of the local dominant groups were even available to partner with the BSP, or were already aligned with other parties, such as the Yadavs with the Samajwadi Party. Simply put, there were no other groups for the BSP to ally with, all except the Muslims who, despite carefully spun rumours, have not been swayed by the Modi wave.

The question that begs to be answered is what are the state – and the Samajwadi Party which is in power – doing about this violence? Much has been said about the shared responsibilities of the BJP and the SP in the Muzaffarnagar riots – the BJP for having turned a spark into a fire, and the SP for having waited too long before sending the firefighters. But the point is that the SP ultimately did send the firefighters and demonstrated that the outburst of violence was not merely a matter of failing state capacity.

In the current situation, the first responsibility of the SP is to reverse the general degradation of the law-and-order situation in the state. Seldom has the party in power let such a state of lawlessness and sense of impunity prevail. Physical violence is a feature of daily life in most localities, as a means to solve inter-personal or inter-caste conflicts and as an instrument to preserve the interests of dominant groups and control over the lower groups. This author conducted fieldwork in 11 villages across Baghpat and Meerut districts nine months before the Muzaffarnagar riots and found only two that did not have a recent murder story to tell. The situation cannot improve when the local police are simply not there to register FIRs and when state actors and legislators are themselves complicit in the violence – if not the actual perpetrators.

One possible explanation for this state of affairs is that Chief Minister Akhilesh Yadav is not in control of his own party and cannot activate the local cadres to stop or mitigate the violence. In Mayawati’s time, a BSP MP or MLA crossing the yellow line would be sent an invitation to waltz to jail with the Black Cats, under the eyes of the press, invited for the occasion. The BSP could afford to do that as its elected representatives were drawn from local elite groups detached from the local Dalit population who form the bulk of the party’s voters. Party affiliation was not even a prerequisite. These MPs and MLAs were expendable.

This is not the case for the SP, who tends to select its candidates from the same sociological pool of local elites as the BSP, but draws them generally from the local party cadre. The reason is that the local SP leaders and the local elite groups tend to be the same people. The SP is essentially the party of the new elites and its local organizational strength depends from its local representatives. Expelling its members therefore come at a greater cost than for the BSP, since it is usually followed by the breaking up of its local branches.

Another possible explanation, less common, is that Akhilesh Yadav is finding it difficult to assert his authority over a bureaucracy that has seen a lot of water flowing under the bridges in the derelict state of Uttar Pradesh. Reports suggest that the bureaucrats – notably in the police force – are increasingly less cooperative with a government that seems unresponsive to the ground situation.

There is a third possible explanation, which suggests that the SP has cynically allowed the situation to deteriorate, hoping that it will backfire against the BJP after having hurt the BSP. This argument does not hold water as the same wait-and-see strategy adopted by the SP at the beginning of the Muzaffarnagar riots clearly backfired, a fact it could not but notice.

The amplitude of the current outbursts of violence seems disproportionate for the political gains at stake – a mere 12 assembly seats and not even a chance to defeat the SP’s majority at the Vidhan Sabha. The real objective is the next assembly elections in 2017, which are still far away. But by letting the situation rot and even degenerate, the state government may expose itself to the risk of President’s Rule.

Gilles Verniers is a Ph.D. candidate at Sciences Po, Paris and Assistant Professor of Political Science at Ashoka University, Haryana.