Contribute Now
Ad
Can an editor spoil your New Year party? Well, Vinod Mehta certainly did when he noticed ads in Bombay tabloids advertising dancing sensations from the filmy world, including the ‘seductive Silk Smitha’ performing at Azad Maidan on New Year’s Eve (1986–87 if I remember correctly). I had just returned after a hectic week in Goa covering the language riots and this was supposed to be a sop. Tickets for the show were on sale at the venue – the cheapest going at Rs 75. Vinod thought it would make a good off-beat story for the back page of the Observer, and I was entrusted with this unenviable task. I made a few calls rather reluctantly and found out that the dancing stars could well be only lookalikes – extras from the film industry. When I pointed this out to him, my editor was all the more excited. ‘That will be even more interesting,’ he said, dashing all my hopes for the evening I had planned with friends. As luck would have it, 31 December that year fell in the middle of the week, which was just right in terms of timing for the paper, which came out on Sunday.

The extras, I learnt in the course of the day, did this act every year. Some of the New Year shows held in small-town Maharashtra were big hits. Those were the days when there was no satellite television to entertain viewers and the fare dished out by Doordarshan to usher in the New Year was uninspiring. On the other hand, dance shows with skimpily clad ‘stars’ gyrating like cabaret artists were very popular. It was a low-budget affair requiring a stage, a sound system and some lights. The lookalikes were paid a nominal fee, but it was far more than they would earn in a day for sweating it out on a film set. All this information came from a gentleman who booked such shows. ‘You see the dhamaka at Azad Maidan and you will understand what I mean,’ he said.

An extra being passed off as the real star was a common phenomenon in the film fraternity. The pimps who promised an unsuspecting client a night-out with a noted actress would tap a lookalike. The tradition apparently still continues, with some girls attaching themselves to ‘high-class’ brothels which have an arrangement with C-grade hotels in the Juhu–Versova belt. In his book, Maximum City: Bombay Lost and Found (Penguin India, 2004), Suketu Mehta describes what typically happens:

‘The hick from out of town is shown a photograph album of the house’s (brothel’s) inventory. He picks a film heroine lookalike, pays an exorbitant sum for her favours, and due to the poor light and his nervousness, goes back home convinced that he spent a night with a Bombay actress. Every time he sees her on screen he flushes with secret pride.’

No extras, only aspirants

No extra likes to be known as an extra. They would rather describe themselves as aspiring heroes and heroines. When I used to live on Yari Road in Versova, sharing a flat with two friends, we had a couple in the neighbourhood who frequently called on us. Rajeev was a Punjabi whose family had settled in Bangalore and Rima was from Gujarat. Both had come to Bombay to make it big time and had met and fallen in love and married. The two had taken lessons in method acting, learnt horse-riding (considered essential to become stars in those days) and hung out at the Coffee Shop in Prithvi theatre where directors come and go, discussing their next project.

The couple did everything right but never got the big break. Typically, at the end of a frustrating day, they would come to our flat to unwind and ‘catch up on news’. I suspect they were more interested in the whisky we served. With the liquor inside them, they would become expansive and talk about how big banners were interested in casting them. Sometimes they would bring along an aspiring star from Himachal Pradesh who claimed he possessed the same acting skills as the best in Bollywood but was being denied a chance to prove himself. In a weak moment when he dropped his guard, he confessed to playing an extra in a few films to make ends meet. I never kept in touch with Rajeev or Rima but I learnt that the former landed a modelling contract for a minor brand of jeans, while Rima got a bit role in a TV serial. The couple soon split, called it a day and went back home from the madness called Bombay. Their dreams, like that of countless others with stardust in the eyes, had soured.

To cut back to my story, the photographer who was to accompany me was Frank Robinson, someone a good 20 years my senior and very vocal in expressing his displeasure. ‘My entire bloody evening is ruined,’ he announced loud enough for everyone to hear. But Vinod chose to ignore him. As editor, he had mastered the art of hearing only those things he deemed relevant. Robinson resigned himself to the task and looked at the ads. He was not impressed. ‘Brother,’ he pronounced, ‘this is going to be one lousy night. My wife and daughter are going to be mad at me.’

Being my senior and vastly more experienced, Robinson felt he had the right to drive the story. He told me we would just go for one show – at Azad Maidan, which was close to the office and not sample the few others in the suburbs that we were expected to. So when the editor enquired about our POA, Robinson was very clear. ‘Vinodji, we will only go for the big one here in town. The logistics just don’t work out.’ Logistics was a word he had suddenly discovered and used rather liberally.

We hung around office and then grabbed a few drinks and food from Gokul bar. There was a festive air with the waiters wishing us Happy New Year ‘in advance’. It took Robinson a while to get over the foul mood he was in, but once he was out of it he seemed to be in a tearing hurry. ‘You can hang around at the show, but I will just shoot and scoot,’ he said. Being a family man, he had to be home in time to usher in the New Year. I quite understood his predicament.

When we reached Azad Maidan at about 10 p.m., the crowd was building up – 3,000 people, maybe more. Predictably, it was an all male audience. Wolf whistles rent the air as the lights on the stage dimmed and a dancer came on, moving her body seductively to Nazia Hassan’s ‘Dil Mera’ from the hit Disco Deewane album. ‘Is that Silk Smitha?’ someone near me wondered. He was told that she is not likely to turn up so early. A few songs later, my photographer disappeared. I reckoned he had dashed off to the train station.

Meanwhile, I went around asking questions, like a journalist has to. Where did these young men come from? Why did they choose to spend the evening here? Were they having fun? I got the standard replies: most had come to see Silk Smitha. After the show they intended to spend some time by the sea on Marine Drive. Many were visibly inebriated and may have even sneaked in alcohol. Some wondered what a reporter like me was doing there. ‘These days they must be desperate for news,’ a young man observed. I made some mental notes and having got the profile of a handful and some quotes, decided I must put work aside and enjoy the fun.

I was never a great fan of film music, so the raunchy songs being played as loud as the sound system allowed went over my head. But the crowd freaking out was a sight to see. They were totally into it. This was surely a party of the people. ‘We may not be able to afford the big hotels but we can still have fun,’ I was told. It became clear to me that one had to approach such events without thinking too much about it – just like one would a party at a five-star discotheque or a club. Also, I realized the cat calls and lewd remarks must be ignored unless you wanted them to start bothering you.

As the countdown to the midnight hour began, it was announced that Silk Smitha had finally arrived. There was total silence in the ground with all eyes transfixed on the stage. Soon the star of the evening came on to the stage with two men holding a long and broad towel across her like a mini curtain. Then they moved aside and ‘Silk’ was revealed in her two-piece and a see - through dress over it. She said her ‘Naya Saal Mubarak’ to the crowd and started her act. She was dusky, lithe and a seductive dancer. The crowd was in raptures.

I had watched only one movie of Silk Smitha, the Malayalam film Rathilayam, only because a friend had insisted. It was supposedly a hot film since she was in it. Even today, one can find clips from it on the Internet. But was the woman on stage the real one? From that distance, I could not judge. Anyway, did it matter if she was a lookalike?

You may wonder if I enjoyed the evening. Well, I have been through worse – like sitting through a film with pornographic scenes interpolated, which was the rage among out-of-town folk coming to Bombay. While researching for a story on this phenomenon, I found that a film billed as ‘Sex among Animals – All Revealed!’ was running to packed houses in cinemas in south Bombay notorious for screening such movies. And to think it was only a documentary of animals in the act of procreation. Even French art films sometimes attracted unlikely audiences and when the interpolated hard porn was missed out by the projectionist, there would be chaos. In such a situation, getting an audience’s response and quotes could turn out to be a risky business as you may be mistaken for somebody from the theatre management.

The crowd at Azad Maidan did not get so worked up, though. As they disbursed after the show, I went backstage to see if Silk Smitha was still around. I was told that she had left since she was very busy, still had a show or two and was running behind time. So I called it a day. When I got home, my flatmates were still up and the party was still on. I forgot about the evening, although I had to admit it was not as bad as I imagined. I had at least learnt one more way of celebrating New Year.

The story which came out passed muster – the kind you wouldn’t want to preserve in your clippings. But the evening somehow remains fresh in my memory – vivid enough for me to watch The Dirty Picture on the life and times of Silk Smitha.

Excerpted with permission from Off the Record by Ajith Pillai, published by Hachette India (384 pp, Rs. 399. It will be launched on August 28 at 3 pm at the Mumbai Press Club. 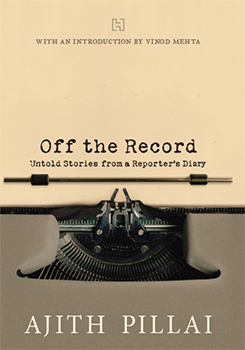