Contribute Now
Ad
Commentators in the business press might have you believe that Rajasthan's labour amendments constitute a radical push for the state's industrial sector. The chief minister, Vasundhara Raje, herself has claimed that the amendments were badly needed to spur economic growth and employment. But on the ground, there is little to indicate that the amendments could change much.

Fallacy 1: The old law made it impossible for industry to hire and fire workers

Before Rajasthan amended its laws, the Industrial Disputes Act mandated that any retrenchment, lay-off, or closure affecting more than 100 workers could be done only with the government's permission. In the last five years, not a single request was made for retrenchment and lay-off. Five requests were made for closure and four were granted. Two were deemed clearances: since the government failed to respond to the requests within 90 days, the proposals were automatically cleared.

Fallacy 2: The amendments will impact thousands of employers

The amended act now limits the need for government permission for firing workers to industries that have 300 employees or more. But the employment skew in the industrial sector makes it clear that the vast majority of units, even before the amendment, didn't need permission anyway.

Fallacy 3: The changes were needed to give flexibility to businesses

As we reported in a previous story, industry owners claim that they no longer face trouble sacking workers. This has partly to do with the weakening of the labour movement. According to the 2011 Census, 10.6 million people, or 35% of Rajasthan's working population, are employed outside of agriculture and household based industry. Of these, less than a million are enrolled as members of worker’s unions. There were only two industrial strikes last year, involving 753 workers. 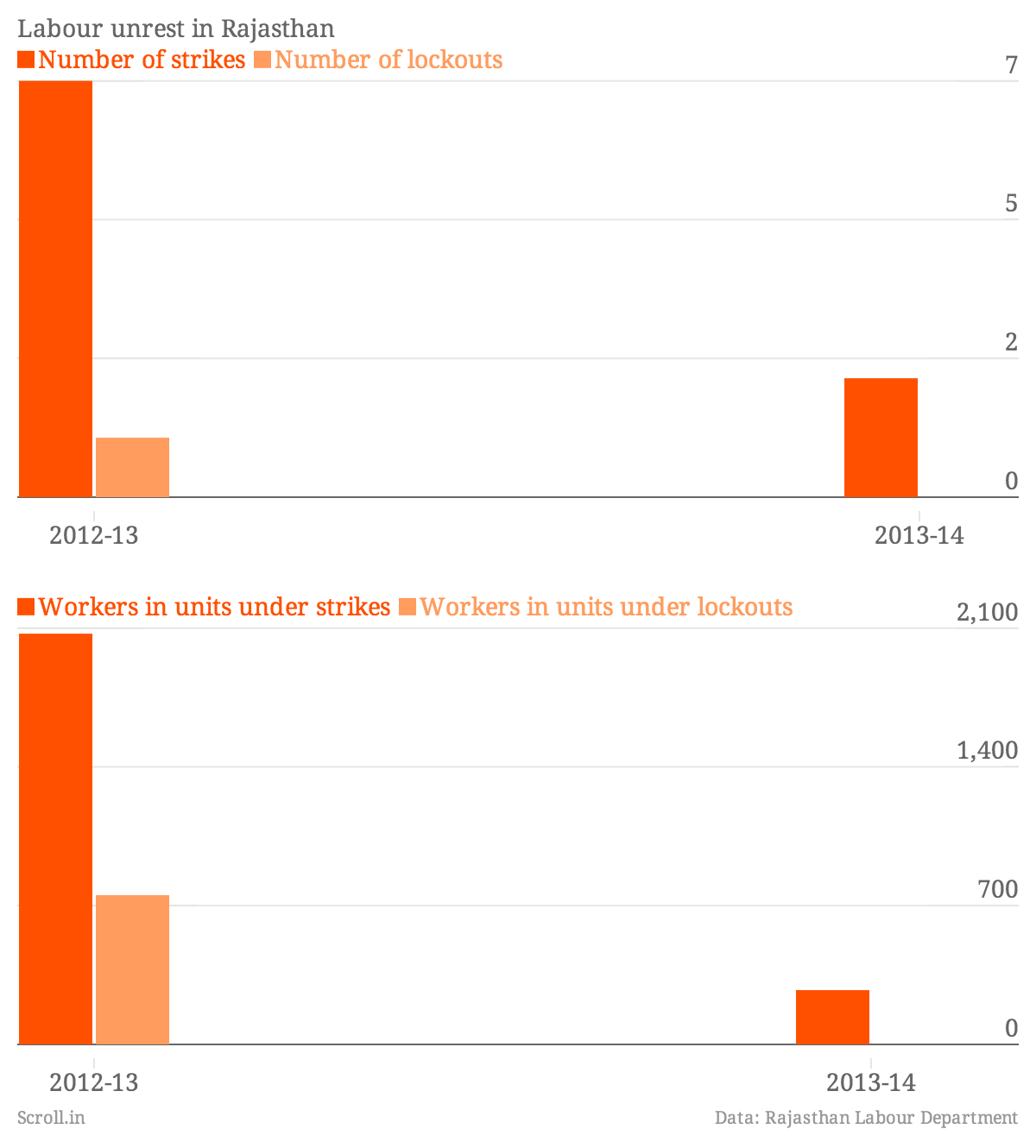 Fallacy 4: The amendments cut through red-tape and bureaucracy

For all the noise about industry being saddled with a large, meddlesome labour bureaucracy, the available data shows the bureaucracy is actually poorly staffed. Rajasthan has just 19 factory inspectors to enforce safety regulations for 12,907 factories employing 479,141 workers. This comes to an average of 25,217 workers in 679 factories under the charge of one inspector. To implement 16 other labour laws, Rajasthan is supposed to have 96 labour inspectors, but in reality, it has just half the number, since the department has not done any fresh hiring for nearly two decades. Both the number and the rate of prosecutions for violating labour laws are low.

Fallacy 5: The old regulatory regime was unfriendly to business

The low number of prosecutions could indicate that industry is abiding by all the laws. But if that was the case, it is hard to understand why not a single industrial unit chose to enroll under the self-registration scheme introduced in Rajasthan in 2006. Under the scheme, once a company declared that it was abiding by government regulations, it would not be subject to regular inspections, barring in the instance of a specific complaint made against it. The scheme offered industry owners an exit out of the infamous “inspector raj” but they chose not to take it. This could be because the penalties for violations under the scheme are higher.

The amendment to the Factories Act has changed the definition of a factory, ostensibly to promote small scale units by exempting them from cumbersome paper work. But an overwhelming number of small scale units were outside the ambit of the Factories Act anyway since they employed less than 10 workers (see graph above on number of industrial units as per worker strength). Now, another 3,000 units have escaped the legal requirement to safeguard the safety of workers. In the case of an accident, these units will not be liable as earlier.

The government has said that the relaxation in the norms for retrenchment of workers is aimed at encouraging employers to hire more workers. This derives from the view that curbs on retrenchment had forced industry to eschew permanent workers for contract labour. But if the aim of the government were to discourage contractualisation of labour in the economy, it is hard to understand why it would simultaneously amend the Contract Labour Act to exempt those employing less than 50 contract workers from registration. The earlier limit was 20.

Fallacy 8: The new laws will lead to industrial growth in Rajasthan

The government has claimed that the change in the labour laws would attract new industry to Rajasthan. But speaking with Scroll.in, officials and industry owners said that labour was just one input in the industrial process and it wasn’t labour inflexibility but the poor skills of the labour force that posed a roadblock. More important to industrial growth was the cost of credit, the price of land, the availability of infrastructure like power supply and roads. Rajasthan would have to do more than tweak labour laws if it wanted to boost industrial growth.