Mummy, I heard you had a fall on your way to meet the lawyer. Hope it’s nothing serious. At this age your bones, especially at the hips tend to get brittle. I guess you had too high expectations about the last court date. It’s better to expect the worst and therefore be mentally prepared for whatever the outcome. Like I mentioned in my earlier letter – ‘there’s many a slip between the cup and the lip’. This would include all the events from the court date, judgment, and release from prison, until reaching Mumbai. It’s better to be prepared for the worst. Although my personal experience tells me it’s easier said than done. Nevertheless, try it. If all works out well, we could plan a trip out in the Diwali vacations. Akshay too will enjoy it. I have not received a letter from you. Regarding your plans to come and visit me I suggest 24th September. In case the judgement is not delivered on that day, you may have to cancel your trip and book it for the next court date.

Prison wisdom says that the first few months of jail life and the last ones are the most horrible. And as freedom neared, the days grew longer and I would lie awake at night. Reading and writing became extremely burdensome. Old school and college friends popped up in my dreams. My mind was probably preparing itself for life on the outside. I started making plans for the future. On 24 September 2011, the Chandrapur court finally dismissed the last of the nine cases against me. Immediately after the order, I managed to phone my wife using a friendly police officer’s mobile. She appeared shocked to hear my voice on the phone after almost four years and initially thought that my call meant that I had been arrested in yet another case. Extreme joy is impossible to express to one’s wife over the telephone, especially on a cop’s phone, surrounded by half-a-dozen armed policemen. That would have to wait.

On the morning of 27 September 2011, I received a mulakaat from my lawyers, mother and brother. We excitedly discussed all that I would do after my release. I had informed them that it would take a couple of hours to complete the procedures for securing my release before being able to meet them. By 2 p.m., all those to be released were lined up before the Lal Gate. I was deliberately kept as the very last.

As I stepped through the wicket-door, a group of men pounced upon me. I could not see my mother or lawyers, who, I later came to know had been made to stand beyond the outer wall of the prison. I attempted to scream and alert them, but the men had their hands clapped on my mouth and, pushing down my head, they dragged me out of the gate. Within seconds they dumped me into an unnumbered white Tata Sumo that had been parked a few feet from the gate. Six men jumped into the vehicle and I was driven out of the prison premises. My mother, brother and advocates, who had come to receive me, were pushed out of the prison by the authorities. My lawyers immediately went to the local police station but the cops there refused to register a complaint regarding my abduction. It was obvious that personnel from the police station and the prison authorities had assisted my abductors.

I was taken out of the city. My abductors, who I assumed were policemen, were armed and refused to disclose their identities, the purpose of my abduction or our destination. I pleaded with them to ease my family’s anxieties by informing them or my advocates about my whereabouts. They refused, despite having mobile phones on which they were receiving repeated instructions from their seniors. After about three hours, I was taken to a police station in Gadchiroli district.

The police rearrested me in two more cases related to Naxalite attacks in 2007 and I came to know my abductors were policemen of the C-60, the elite commando force involved in anti-Naxal operations in the Gondia and Gadchiroli districts. I was once again produced before a magistrate, who granted the police custody despite my complaining about my abduction and rearrest. After five days in Wadsa Desaiganj, Gadchiroli, I was sent back to the Nagpur prison. My old companions in the gunahkhaana had come out to the Badi Gol gate to receive me. Each of them hugged me and helped me settle back into my old cell, filling me in on the details of reports of my rearrest that had appeared in the newspapers. I was crushed at the thought of having to run through the same cycle of torture, bail applications and waiting endlessly for trial dates.

This excerpt from Colours of the Cage by Arun Ferreira is reprinted by permission of Aleph Book Company. 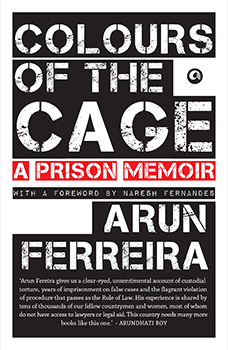 ‘Editor Missing’: An insider’s view of the division that has split India’s national media