Rumours about the Bharatiya Janata Party trying to poach MLAs from the Aam Aadmi Party and the Congress in order to make the numbers to form the state government in Delhi have been doing the rounds for some months now. AAP chief Arvind Kejriwal has on several occasions openly accused the BJP of offering his MLAs money to join it.

But on Monday, AAP released a video on its website, allegedly showing Delhi BJP vice president Sher Singh Dagar offering one of its MLAs Rs 4 crore to thrown in his lot with the saffron party.

No party has a majority in the 70-member Delhi assembly, which has been in a state of suspended animation since Feburary, when Kejriwal resigned as chief minister after his party failed to table a Jan Lokpal bill aimed at curbing corruption. The territory is currently being administered by the Lieutenant Governor.

Last week, Lt Govenor Najib Jung sent a letter to the President, asking for permission to invite the single-largest party in the assembly ‒ the BJP ‒ to form the government, even though it is short of a majority.

In the hidden video, said to have been shot at Dagar’s residence, he is negotiating with Dinesh Mohania, the AAP MLA from Sangam Vihar. Not only does he offer money, he also assures Mohania that he will be given the opportunity to contest from the same seat if freshelections are called. Dagar also tells Mohania that the BJP will bear the expenses for his election campaign.

Dagar is heard claiming that the BJP's the senior leadership is aware of the offer, as is the Rashtriya Swayamsevak Sangh. In addition, Dagar says that the BJP is likely to field  Jagdish Mukhi, the MLA from Janakpuri, as its chief ministerial candidate.

“We have been alleging this for months, but no one believed us because of the lack of proof. Now, we have that," Kejriwal said. "We will submit the piece of evidence in front of the Supreme Court tomorrow and let them decide the adequate action to be taken against the BJP.”

On July 4, the Supreme Court had asked the central government to make a decision on dissolving the Delhi assembly. The apex court had asked the Centre to ensure that either a re-election was organised or that some party formed a government within five weeks. After this order, the AAP filed a plea asking for the assembly to be dissolved and fresh elections to be held. The apex court is set to hear the petition on Tuesday. 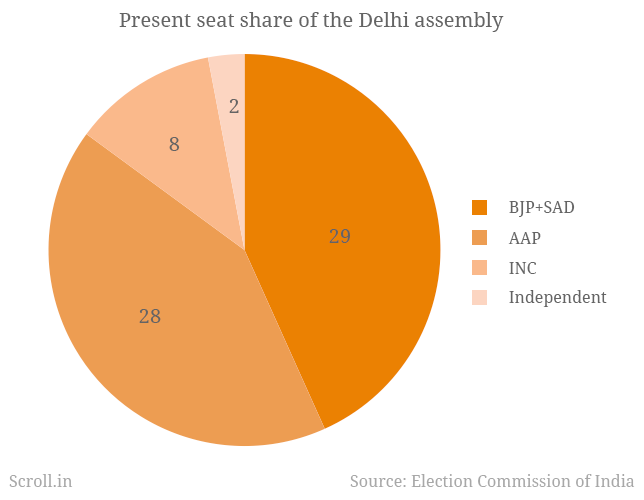 The video has completely changed the situation. Until the weekend, it looked likely that the BJP would form a minority government in Delhi. But now, a re-election in the state looks inevitable, according to political observers.

Meanwhile, Delhi BJP leaders have  accused the AAP of plotting a conspiracy. “The authenticity of the video has to be verified before we jump onto any conclusion," said Mukhi, who was mentioned in the tape as the likely chief minister. "These days, such videos can easily be manipulated or fabricated.” .

Dagar refused to acknowledge having ever spoken to Mohania. “I have never even met the guy," he said. "The video is a fake.”

The BJP, with 29 legislators, is the single largest party in the Delhi assembly. But, it needs five more legislators to form the government. However, with this AAP sting, no MLA from another party is likely to cross the flood for fear of being accused of corruption.