Contribute Now
Ad
It is common for news websites to highlight images of film celebrities' bodies to get quick hits, but when The Times of India went too far on Sunday, actress Deepika Padukone spoke up.

The Twitter account of the newspaper's entertainment section tweeted a video of Padukone with the caption, "ÖMG! Deepika Padukone's cleavage show!" Padukone tweeted back, "YES!I am a Woman.I have breasts AND a cleavage! You got a problem!!??" She further said, "Dont talk about Woman's Empowerment when YOU don't know how to RESPECT Women!"

The Times of India was unfazed. It replied, "It's a compliment! You look so great that we want to make sure everyone knew! :)”

This sent Twitter users into outrage mode against the newspaper all of Sunday. #IStandWithDeepikaPadukone trended all day on Twitter. Here are some of the posts. 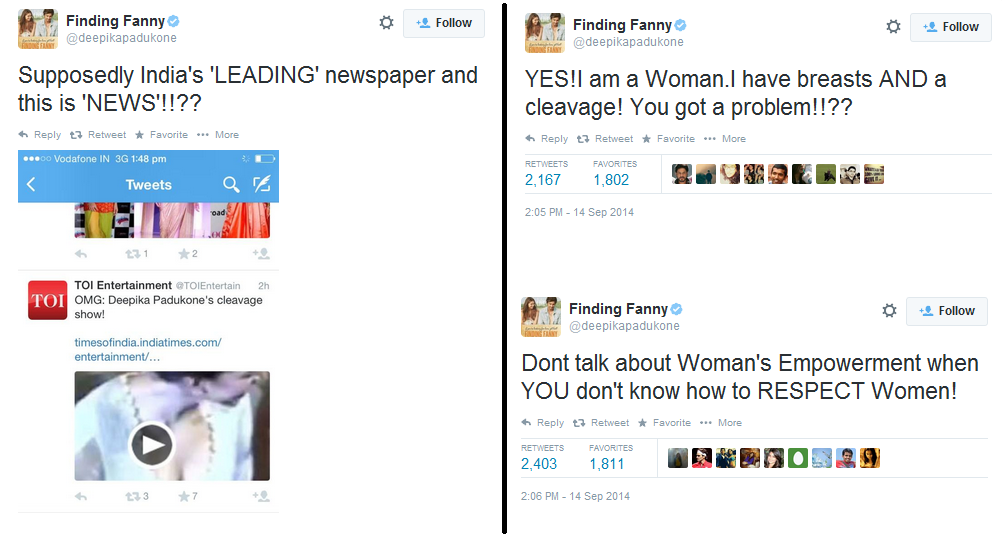 Good for you @deepikapadukone - nothing embarrasses misogynists more than some plainspeak !

@deepikapadukone Bravo! Papers do this to actresses, sportswomen regularly. They need to be shamed & exposed.

They think @deepikapadukone has a cleavage. I think she has got a spine.

Its a shame that this is what we do in the name of journalism.. More power to you @deepikapadukone ..

I think the Times of India tied up with HuffPo just for their sideboob vertical. #Synergy

Dear boys, If you are tweeting #IStandWithDeepikaPadukone then I expect you to also respect women on the road. Please don't sing songs!