Contribute Subscribe
Ad
Rule 37 of India’s mining law disallows a company that has been given the right to mine an area – officially termed a mining lease – from transferring it to others without the consent of the state. But what if the company does not transfer the lease but its shareholding quietly changes, which in turn changes the ownership of the lease? Would such a transfer amount to a violation of Rule 37?

This question could have been adjudicated by the Supreme Court in the case of Thakurani B mine in Odisha.

As reported by Scroll, the mine faces the court’s scrutiny for a possible violation of Rule 37. Located in the north of the state, in the predominantly tribal district of Keonjhar, the rich iron ore is no longer in the hands of the Sarda family, the original recipient of the mining lease. Instead, Scroll’s investigation shows individuals and firms connected with the Naveen Jindal group have held controlling stake in the company operating the mine since September 2006.

In an economic world dominated by modern corporations with multiple shareholders, why should a change in the ownership of a mining company invite the scrutiny of the government and the courts?

A recent verdict of the Supreme Court provides an answer. In April, in an order cracking down on illegal mining in Goa, the Supreme Court said, “In our view, if these violations of Rule 37 are allowed, there shall be substantial leakage of revenue, and mining operations cannot be effectively regulated and controlled by the state government.”

A 2011 report of the Odisha government’s department of steel and mines had found that the state had lost revenue on account of the proxy control of Thakurani B mine. But the implications of the proxy ownership go beyond revenue losses.

The ideal world of mining allotments

Under the Mines and Minerals (Development and Regulation) Act 1957, mineral resources are the property of the states, and state governments have discretionary powers to allot them depending on their economic and social objectives.

In an ideal world, state governments use their discretionary powers to extract a better deal for the state by making mining companies part with profits, carry out social welfare, or make economic investments in the state.

In 1997, in the landmark Samatha judgement relating to Andhra Pradesh mines, the Supreme Court upheld the state’s power to take away 20% of the net profits of miners for development projects like schools, hospitals and sanitation.

In Jharkhand, the state government, while signing an MoU with Tata Steel which assured the company of access to the state’s iron ore, imposed certain conditions on the company, like the establishment of industrial training institutes and polytechnics.

Recently, in Odisha, the Supreme Court held that Vedanta must spend 5% of its earnings from the Lanjigarh project on local area development.

If Jindal Steel and Power Limited, instead of controlling Thakurani B mine indirectly, had directly applied for it, Odisha government could have introduced similar conditionalities in the lease.

At the very least, it could have made the mining grant contingent on investments in iron and steel industry within the state. Rule 35 of Mineral Concession Rules mandates that states consider the end use of minerals while choosing between applicants for a mining lease. Under the current state policy, Odisha wants its minerals to be processed within the state, so that it can earn higher revenues, as well as create jobs and raise economic growth.

But in the case of Thakurani B, the raw iron ore was crushed and sized by JSPL into pellets that were transported to its steel plant in Raigarh district of Chhattisgarh. According to the MB Shah Commission report on illegal mining, they were even briefly exported to China. In the process, Odisha lost out on the opportunity to use its iron ore for higher value steel manufacturing within the state.

The real world of mining allotments

But why did the state government give the mining lease of Thakurani B to the Sarda family, which had neither a proposal to set up an industrial project in Odisha, nor was bound to sell its ore to existing projects in the state?

The case throws light on the dark side of the discretionary powers of state governments.

The Shah Commission with goes over the chronology of the mine in detail.

In 1934, the King of Keonjhar granted mining rights over 2260 hectares of the Thakurani mine to Babu Hiralal Sarda, a merchant based in Chaibasa. The mine had two parts – A and B.

The mining lease for both parts was renewed in favour of the Sarda family in 1968, but the mine fell into disuse following disputes within the family.

In subsequent years, Odisha sought to reserve the mine for the public sector, but the family fought the move in the courts.

In the late '90s, as growth in China led to an iron ore boom in India, the family made a bid to renew the lease again.

The Shah Commission report points out that the "surrender’" was a clever move, since the family could not have made claims for both the parts, since the law does not allow anyone to mine more than 10 square kilometres of land holding a particular mineral in a state.

And yet, the state government, which had an appeal pending in the Supreme Court, cited the surrender as reason to withdrew it and renew Thakurani B in the favour of the Sarda family in August 2001. “This cannot be a coincidence,” notes the Shah Commission report, “but a well planned move by the two claimants and the state government.”

From the first year itself, the entire output of the mine was sold to JSPL, which transported it out of Odisha. A year later, the chief secretary of Odisha, while considering the Sarda family’s request to allow transfer of the lease to a company, noted that the mine was “being operated by the Jindals”. He belatedly tried to insert a condition that could prevent the iron ore from Thakurani B from leaving the state. “Can we also suggest that sponge iron and steel plants in Orissa will have the right of first ‘refusal’?” he said.

The state’s law officer agreed, but the advocate general felt it would lead to litigation. The chief secretary allowed the transfer of lease without any condition but suggested that JSPL’s application for Thakurani A not be considered “as it is obvious that they have already access to the iron ores of Thakurani ‘B’ through SL Sarda and ML Sarda”. Giving JSPL mining rights to Thakurani A would be against “the best interest of the state”, he said, as “other potential investors in steel plant sector in the State would be debarred from having access to the huge reserve of Thakurani area”.

A fight over resources

Seen in this backdrop, the case of Thakurani B mine is symptomatic of the keen contestation over natural resources in post-liberalisation India. In the mineral-based industrial sector, access to a mine is often the first step in a juggernaut of gains for a company. The profits harvested from a mine can be used to make investments in new industrial projects, for which the company can seek newer mines from the government, setting in motion a virtuous cycle for the company.

This is evident in the case of JSPL. As the production of iron ore from Thakurani B mine rose, the company’s proposed investments in Odisha’s steel sector expanded. For the new projects, it sought access to Thakurani A. 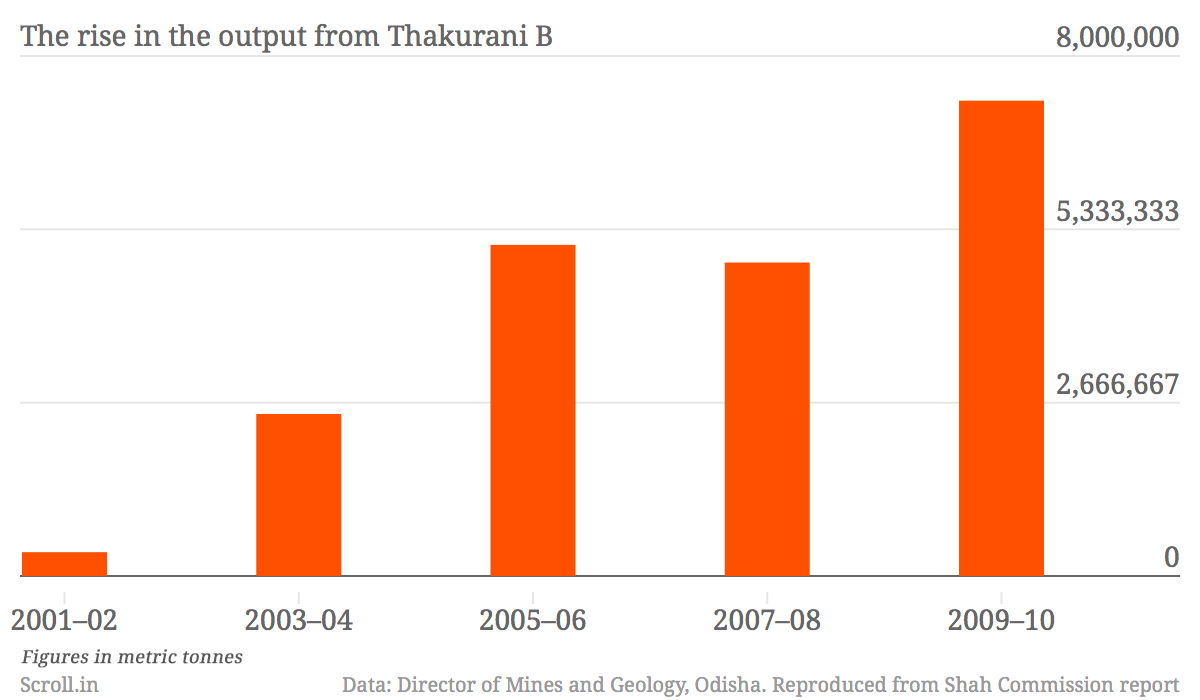 Direct control of Thakurani B, as opposed to proxy control, would have ruled out the company’s chance of acquiring Thakurani A, which remains under legal dispute with multiple claimants to its reserves.

The legal framework for mining

India’s mining sector is regulated by a legal framework that was created in the post-Independence years when mining was a small sector, largely in the hands of the public sector and merchant miners.

Post liberalisation, the mining sector has expanded, seeing the entry of large private corporations which are controlled by multiple shareholders and are subject to mergers and acquisitions.

Rule 37 might appear anachronous in such a world. Strictly interpreted, lawyers say, it would neccessitate that mining companies seek the state’s permission each time their ownership changed hands.

In Odisha, apart from Sarda Mines, the Shah Commission report has pointed out the case of Aryan Mining & Trading Corp. According to the commission, the company’s shares have been transferred to UK-based trading giant Stemcor, which has now gained control of Aryan Mining’s mine at Koira.

There have been demands from the mining industry that Rule 37 be amended. But experts say that Rule 37 cannot be viewed in isolation. It is the entire legal framework of mining than needs to be examined.

India’s mining sector has come to be mired in controversies because governments enjoy vast discretionary powers in the allotment of mineral resources, which have been used to corner resources for political allies.

To bring transparency to the sector, a draft mining bill was drawn up in the second term of the United Progressive Alliance government. The bill proposed that mining rights should be given to the highest bidder through competitive auctions, and miners be made to share 26% of their profits with local communities.

The bill went through several drafts, but now appears to have gone into cold storage. Industrial lobbies were opposed to several of its provisions.

But mining activists argue that if minerals are given through competitive bidding, not only would the state make more revenues through the proceeds of auction, even the value of the mineral would be reflected more accurately in the sale. In such a case, transfer of shareholding in the corporation would be less problematic.

“If the company has competed to get the mine, it has paid a price for the resource,” said Sudiep Shrivastava, a lawyer and activist. “But without competitive bidding, the state has given the mine to the company cheaply, to achieve a particular objective: for instance, the setting up of a project. In such circumstances, the state must have the chance to examine the transfer of ownership to see if it has defeated the purpose of the allotment made under special circumstances.”

There might still be other reasons for the state to want to keep track of the shareholding pattern of mining companies: to prevent concentration of ownership of key economic resources.

But at the very least, insist activists like Shrivastava, the Narendra Modi government must revive the discussion over the draft mining bill.

You can read the first part of Supriya Sharma's mining investigation here.