Become a Member
Ad
Facebook has a problem. Two-thirds of the world's population is not on the internet. Male domination in India is part of this problem.

In September 2012, the number of active users on Facebook crossed one billion. The next year, Facebook tied up with six mobile companies and created a platform called Internet.org to get the next billion users online by making internet access easier and cheaper through mobile phones. As of June, Facebook had 1.32 billion  active users. Most of these come from the United States, but the second-largest number are from India.

Yet, as Facebook founder Mark Zuckerberg visits Delhi to deliver the keynote address at the first Internet.org summit, he could look at the most invisible reason for slow internet growth in India: that women don't have access to it as easily as men do.

Zuckerberg needs to look no further for this than the data for active Facebook users in India. As of June, the social network said that it had 108 million Indian accounts. Currently there are around 11.1 crore Indians active on Facebook, 2.7 crore are women and 8.4 crore are men. In other words, for every Indian woman on Facebook, there are three Indian men. This is a lot more skewed than the Indian population's sex ratio, which is not great by itself: 943 women for every 1,000 men, according to the 2011 Census of India.

The map below shows the sex ratio of Indians on Facebook by state, using data Facebook makes publicly available to those who want to advertise on it. The exact ranking of states and union territories by sex ratio on Facebook is given in a chart below the map. 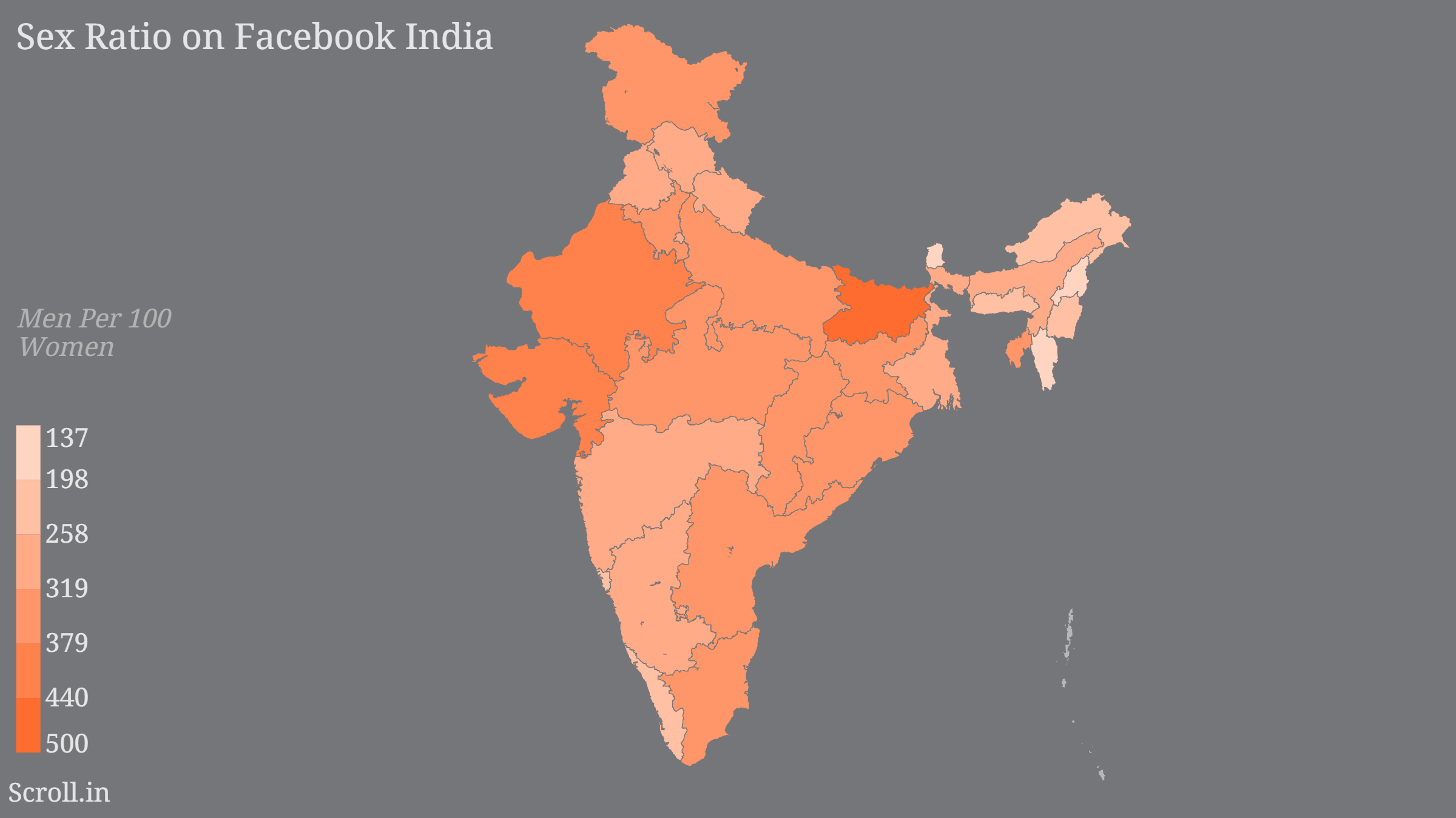 Bihar, Gujarat and Rajasthan are the worst: the sex ratio of Facebook users in these states is four men for every woman. However, these are not the worst states for over-all sex ratio of India's population in the 2011 census.

While four outlying Union Territories such as Andaman and Nicobar islands are even worse than those states, the best sex ratio is unsurprisingly in the North Eastern states. Mizoram has 137 men for every 100 women, making it the best state for women who want to be on Facebook. The Bengali-dominated state of Tripura is an glaring exception. Delhi, Kerala, West Bengal and Goa do considerably better than the national average. 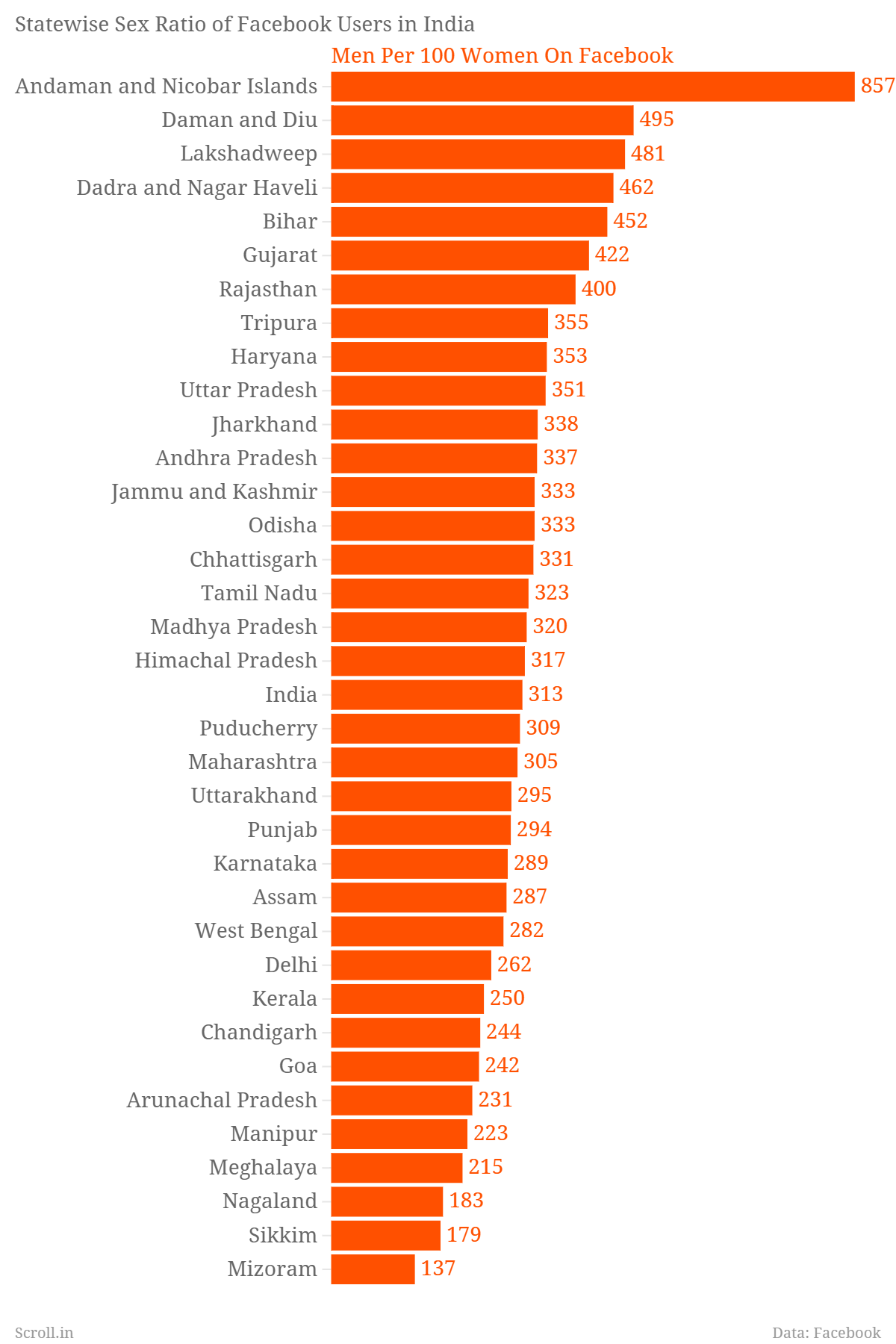 A look at the sex ratio of Facebook users in some Indian cities with more than a million population shows that Bhiwandi near Thane in Maharashtra is the worst. The city has over six men for every woman on Facebook. The five worst cities in this regard are all in western India. The best three cities are all in Kerala. 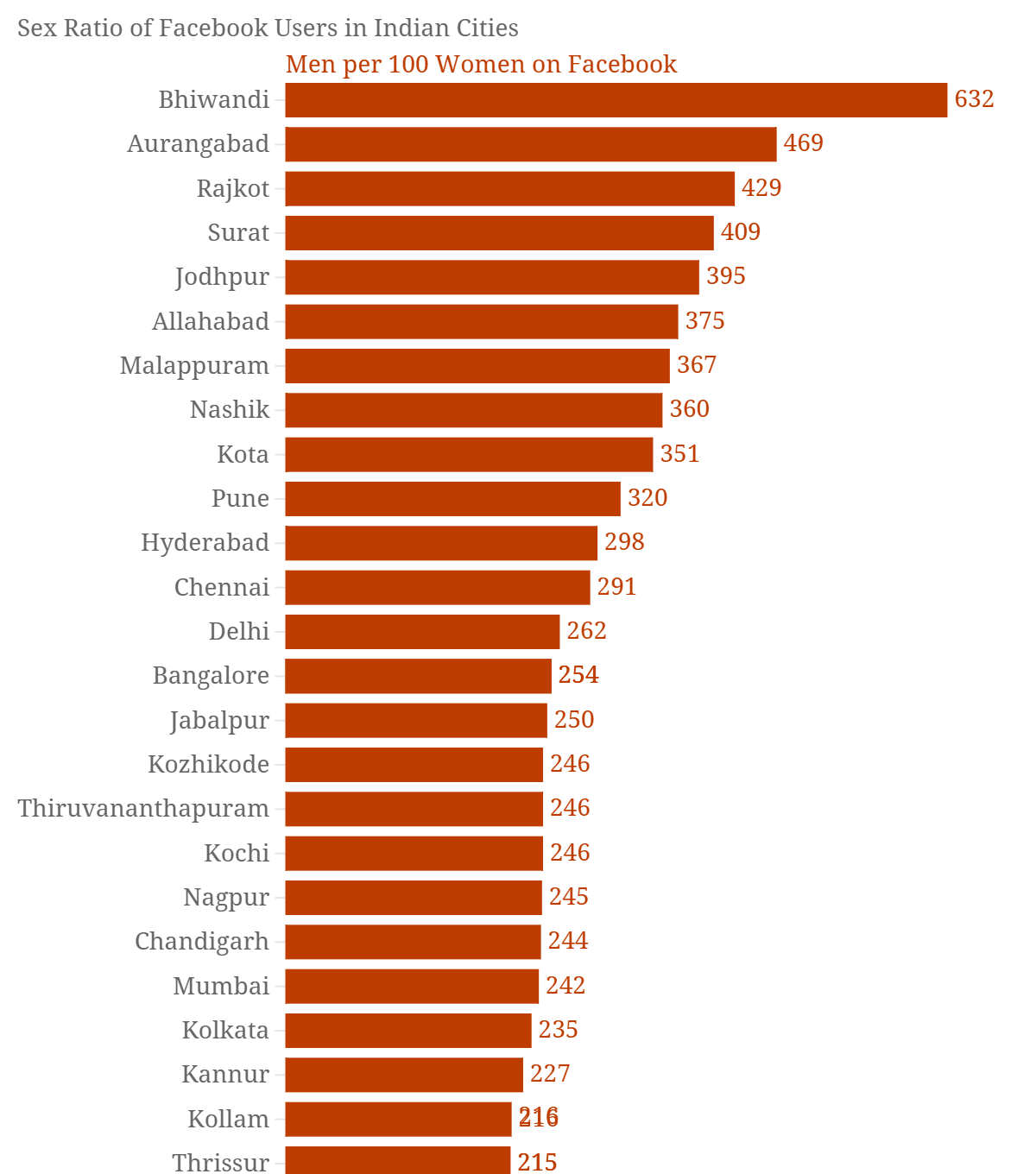 In its studies in Delhi, Jharkhand and elsewhere, FAT found that women want the internet, but they are often too afraid to even ask their brothers or parents, just as they are afraid of asking if they can go out on their own in the evening. Limited resources mean that the men of the household are the first to get a mobile phone and access the internet, but sometimes it is not even about affordability, says Buragohain.

"Ïn Jharkhand we found men charge their phone using solar panels and use the internet in the absence of electricity, but often make it clear to their sisters they can't use the chargers," she said.

A big part of what men do on their phones is watch videos, and often don't want to let their sisters see what videos they are watching. Even younger boys have access, but their older sisters don't. The discrimination is similar to that in education: Indian families tend to spend more on the education of boys. In the case of the internet, there is the added element of fear. Families fear women having access to the internet, just like going out, because opening up the world to a woman means losing some of the power that men exercise over their lives. If Mark Zuckerberg wants more Indians on the internet, he will have to face the problem of patriarchy. Incidentally, researchers from Facebook have already made a visit to the FAT office.

In 2010, FAT asked women in the lower socio-economic strata in Delhi if they wanted to have access to the internet, and they all did. The first thing they wanted to do online was get on to Facebook. So, in 2010, FAT started a technology training centre for such women in south Delhi's Lajpat Nagar area. Every year since 2010, over a hundred women are trained in using computers, smartphones and cameras. Here is a video they made just before they started the training centre in 2010.

Since there are varying estimates of internet penetration in India, the Facebook advertising data is a good indication of the real reach of the internet, considering almost everyone is on Facebook. Using Facebook's current data and matching it with the 2011 Census, we came up with the following map of Facebook usage in India. (As this is based on Census 2011 data, this does not take into account population growth since then, but the differences caused would be marginal.) The highest penetration of Facebook in India is in Delhi, followed by Sikkim, Mizoram, Kerala, Maharashtra and Uttarakhand. The lowest penetration is in Assam, followed by Bihar, Andhra Pradesh (undivided), Jharkhand, Chhattisgarh, Uttar Pradesh and Odisha. In Delhi, 55% of the population seems to be on Facebook. In Assam, only 1.5%. 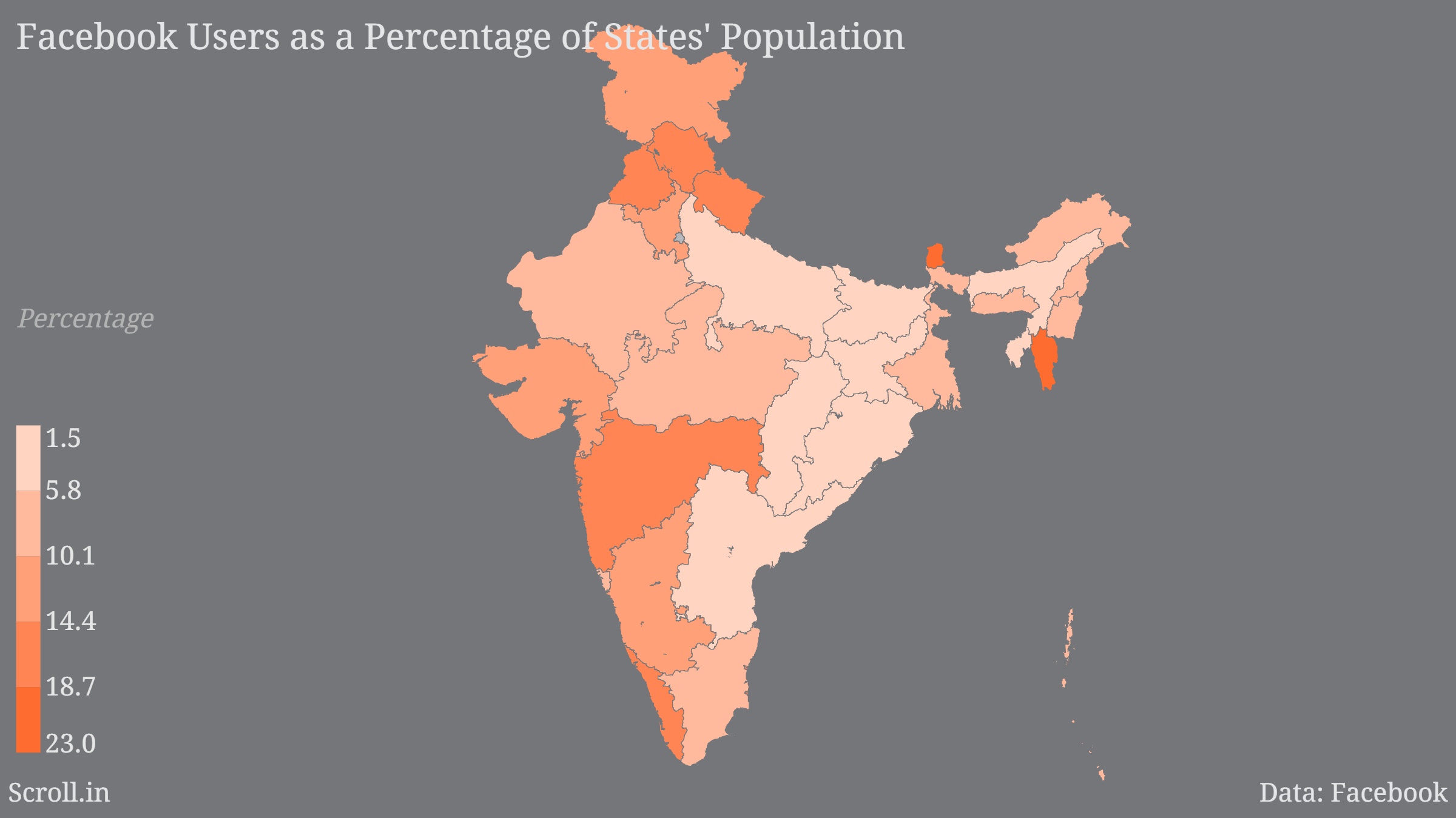 A cursory comparison of the map above with the first map in this article, showing state-wise sex ratio of Facebook users, suggests a co-relation between Facebook penetration and its access to women. Yet this is not so true for states like Rajasthan, Gujarat and Haryana, which have the worst sex ratio of Facebook users but not the worst Facebook penetration. That Delhi, which has one of the worst population sex ratios in India (866 women for 1,000 men), has a Facebook sex-ratio better than the national average, is some hope that economic prosperity will help women join the internet, even if after men have joined it.

Going by absolute numbers rather than percentage of population, the state with the largest number of Facebook users in India is Maharashtra, followed by Delhi. 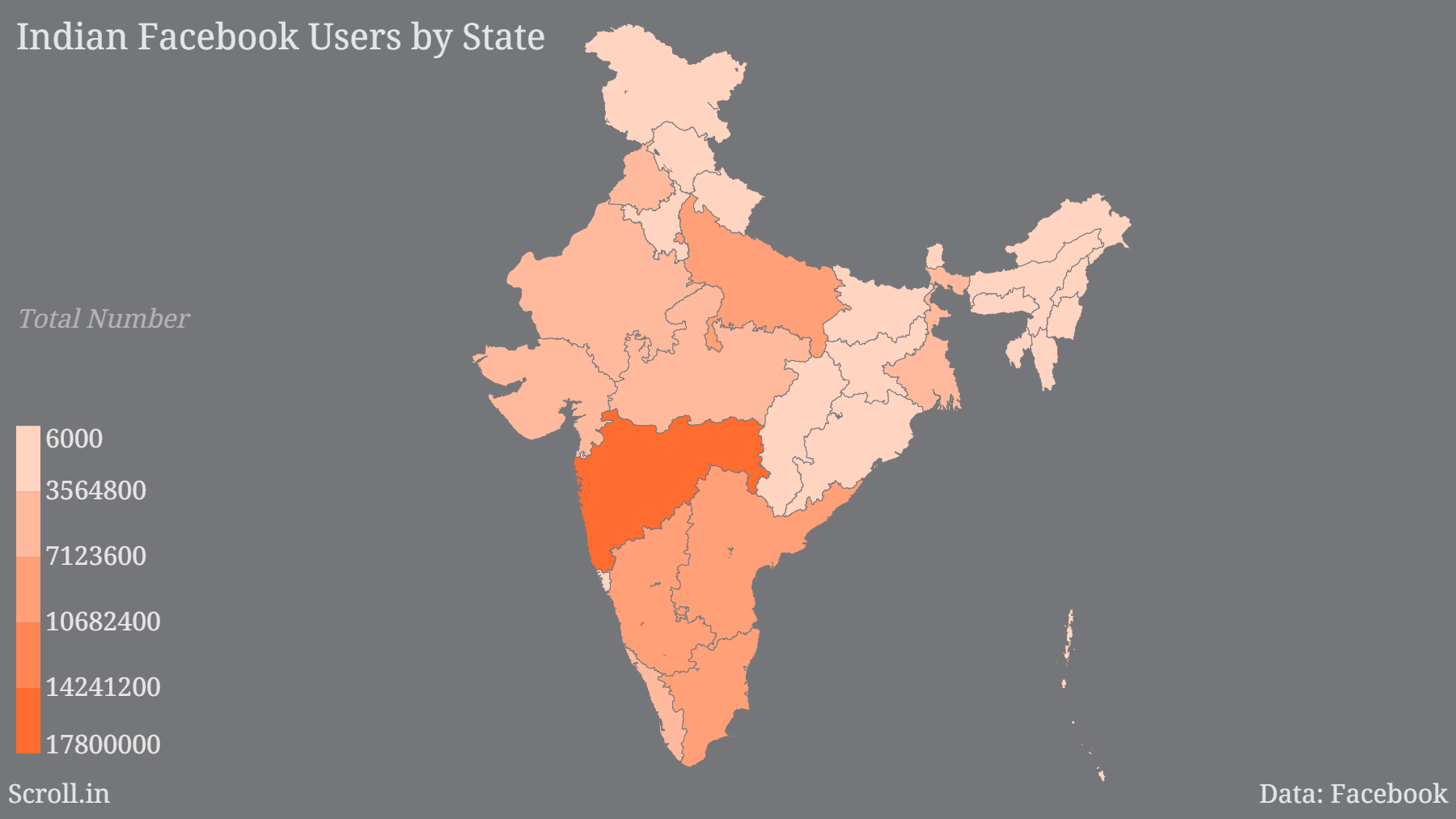 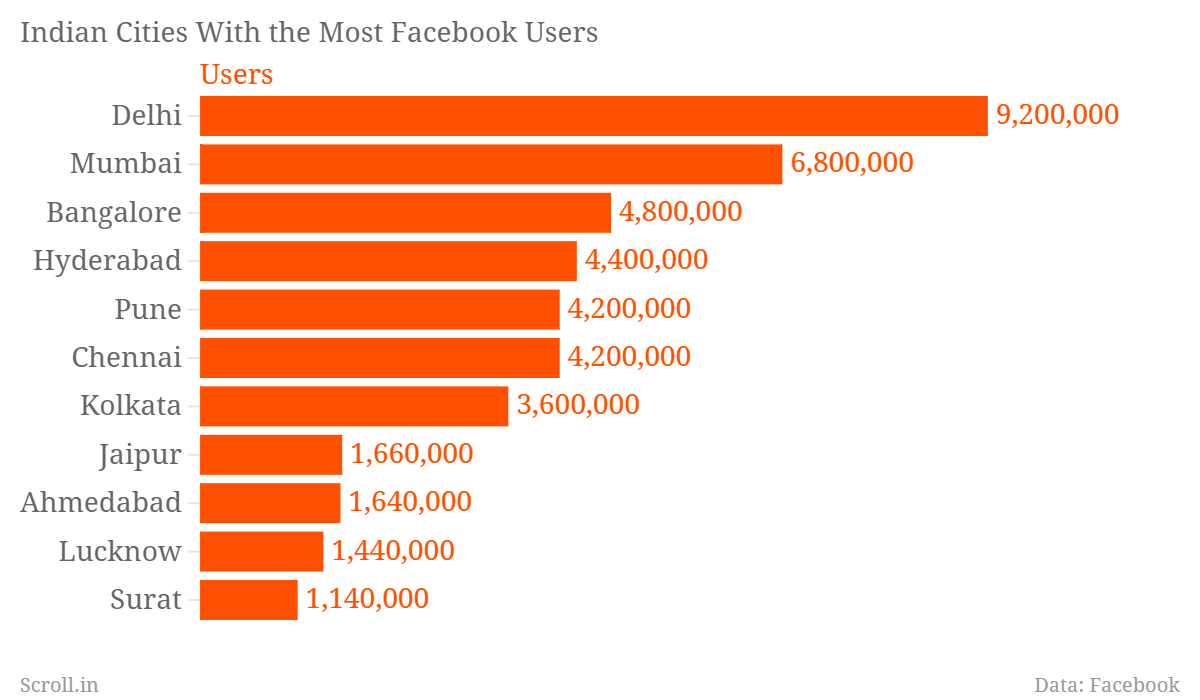 (Jennifer O'Brien and Rohan Venkataramakrishnan contributed to this story.)