Contribute Now
Ad
Iqbal is credited with creating the idea of Pakistan. In truth, the Two-Nation theory was already common currency when Iqbal became its most vocal proponent. Iqbal the patriot embraced the Two-Nation theory and devised the idea of a north-western Muslim province when he became convinced that Muslims faced extinction in India. He demanded the formation of a Muslim state in these words: ‘I demand the formation of a consolidated Muslim state in the best interests of India and Islam. For India, it means security and peace resulting from an internal balance of power; for Islam, an opportunity to rid itself of the stamp that Arabian imperialism was forced to give it, to mobilize its law, its education, its culture, and to bring them into closer contact with its own original spirit and with the spirit of modern times.’

In his demand for a Muslim state, Iqbal, therefore, ‘tacitly excluded the Muslims of Bengal, although they also formed a majority within their region and had in fact briefly enjoyed a separate state of their own.’ Iqbal’s vision, however, did not remain limited to the Muslims of north-west India. In 1937, in a private and confidential letter to Jinnah, he wrote: ‘Personally I think that the Muslims of north- west India and Bengal ought at present to ignore Muslim minority provinces. This is the best course to adopt in the interests of both Muslim majority and minority provinces.’

Also, it must be noted that the truth is occluded when we say that Iqbal envisioned Pakistan, and Jinnah made his idea a reality. The truth is more complicated than that. The fact is that, initially, Jinnah hardly paid any attention to Iqbal’s vision. Rather, Jinnah was suspicious of this entire project for a long time. While Iqbal was announcing his call for Pakistan in Allahabad, Jinnah was in London at the Round Table Conference ‘making a last-ditch effort on behalf of his cherished goals of constitutional reforms and protection of the rights of the Muslims within a unitary India.’ It was the growing narrow-mindedness and violence of Hindu communalists and the shortsightedness of the other leaders within the Congress that gradually turned Jinnah into a zealous supporter of the idea of Pakistan.

Unlike Iqbal who was an idealist, Jinnah initially rejected the Two-Nation theory. On August 11, 1947, in his very first speech to the constituent assembly of Pakistan, he did not say anything that implied that the Hindus and Muslims were two separate nations with two separate destinies. In fact, he did not even mention the word ‘Islam’ in his speech. According to Jinnah, religion had ‘nothing to do with the business of the State’. While Iqbal believed that Islam itself was no less a polity, Jinnah declared to his listeners:

‘If you change your past and work together in a spirit that everyone of you, no matter to what community he belongs, no matter what relations he had with you in the past, no matter what is his colour, caste or creed, is first, second, and last a citizen of this State with equal rights, privileges, and obligations, there will be no end to the progress you will make. We should begin to work in that spirit and in course of time all these angularities of the majority and minority communities, the Hindu community and the Muslim community – because even as regards Muslims you have Pathans, Punjabis, Shias, Sunnis, and so on, and among the Hindus you have Brahmins, Vaishnavas, Khatris, also Bengalis, Madrasis, and so on – will vanish. We should keep that in front of us as our ideal and you will find that in the course of time Hindus would cease to be Hindus and Muslims would cease to be Muslims, not in the religious sense, because that is the personal faith of each individual, but in the political sense as citizens of the State.’

Most probably Iqbal would not have seen it the same way. In his Allahabad address in 1930, he had asked the audience:

‘Is religion a private affair? Would you like to see Islam, as a moral and political ideal, meeting the same fate in the world as Christianity has already met in Europe? Is it possible to retain Islam as an ethical ideal and to reject it as a polity in favour of national politics in which a religious attitude is not permitted to play any part?’

Yet, according to Iqbal’s friend Edward Thompson, towards the end of his life the poet had developed reservations about the idea of Pakistan. I quote from one of his articles: 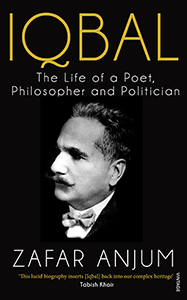