Oct 10, 2014 · 11:29 am
Shivam Vij
Bollywood actress and cricket enthusiast Preity Zinta happily tweeted the other day that she “threw out” of a cinema hall a boy who had failed to stand up for the national anthem before watching Bang Bang. The boy, whoever he was, was quite lucky. A 20-year-old philosophy student in Thiruvananthapuram landed up in jail under sedition charges.

The fiery, patriotic Preity Zinta was condemned as a bully by many on Twitter, and as a result decided to delete her Tweet. However, she has made herself a proper patriotic martyr, tweeting about how we should all show love for the nation.

The philosophy student in Kerala took to Facebook, where his post annoyed some people. Causing annoyance on the internet in India is punishable with up to three years of jail time. What makes it harder for him is that his name is Salman M, and being Muslim in today's India causes annoyance by itself.

The Kerala moviegoers who got him booked, the annoyed Facebookers and Patriotic Preity all need to read Rabindranath Tagore. They also need to read the law of the land but we’ll come to that later.

All the patriots must no doubt have some respect for Tagore, considering he wrote the anthem they want everybody to stand up for. Tagore was, among many other things, a giant intellectual of the Indian freedom movement.

He won the literature Nobel in 1913, the first Indian to win the prize, and was knighted by King George V. A man already so renowned internationally gave up his knighthood in 1919 to protest the Jallianwala Bagh massacre. Tagore was the one who described Gandhi as Mahatma, a fact one can mention today without incurring the wrath of trolls because, you know, Gandhi has been modified.

Patriotic Preity and Salman M’s fellow moviegoers don’t have to read much. All one is asking them to read is one lecture delivered by Tagore called Nationalism in India. Won’t our patriots want to read what the author of the national anthem had to say about nationalism in India? It’s online. They can read it while charging people with Section 66A on Facebook and giving patriotism certificates on Twitter.

Tagore delivered similar lectures about nationalism in Japan and in the West, which they may also want to read. The one on India, however, should be compulsory reading for all patriotic Indians. 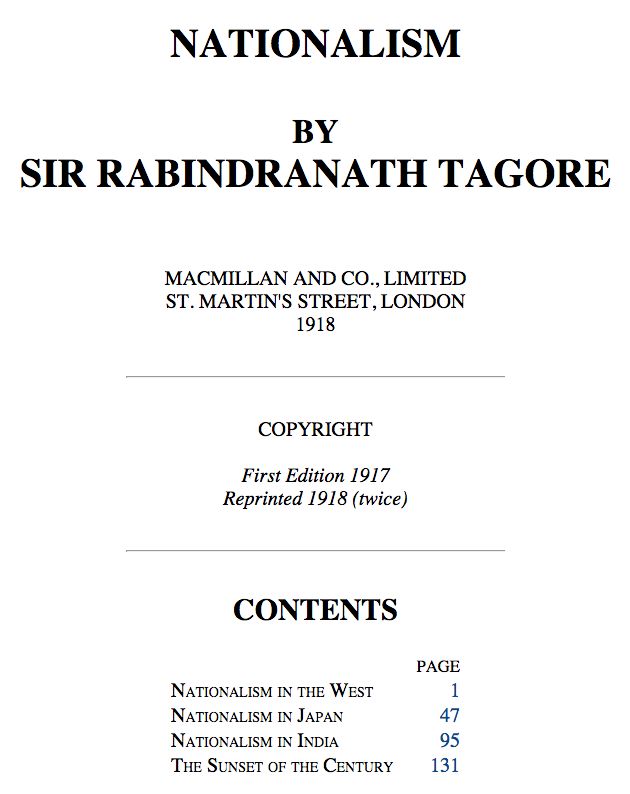 “Nationalism,” Tagore said in the lecture, “is a great menace. It is the particular thing which for years has been at the bottom of India’s troubles.” This was not a reference to what Indians were doing. Those words refer to the British, because European nationalism was the driving force behind colonialism. It was European nationalism that was responsible for India’s colonisation, and thus Tagore concluded that nationalism is a bad thing and would be disastrous for India.

“Our real problem in India is not political. It is social,” he said, adding that  “this is a condition not only prevailing in India, but among all nations.”

Nationalism for Tagore was a manifestation of the greed of individuals and the nation-state in his view should merely be an organising, administrative principle. Nationalism, Tagore said, makes man feel “relieved of the urging of his conscience when he can transfer his responsibility to this machine [nationalism], which is the creation of his intellect and not of his complete moral personality.”

“India has never had a real sense of nationalism,” he wrote about the colonial import. “It is my conviction that my countrymen will truly gain their India by fighting against the education which teaches them that a country is greater than the ideals of humanity.” Tagore’s opposition to nationalism also drew from colonialism and the First World War, as also from the inherent dangers he saw in the Indian freedom movement. India’s limited achievement, but also its big challenge, he said, was to keep “different races” together.

Tagore’s relationship with nationalism was, however, not that simple. He was supporting the Indian freedom movement to get rid of the evil of European nationalism that had subjugated India. Yet he was fully aware that the evil of nationalism also lay in the Indian opposition to colonialism.

He was thus supporting exactly what he was opposing. It is only the intellectuals of subjugated nations who are blessed with such paradoxes that make them see what the citizens of a free country are blind to. His reservations about the Indian nationalist struggle and its Gandhian path was reflected in his novels such as Ghaire Baire (The Home and the World) and Gora.

Tagore warned Indian nationalists that ‘mere political freedom’ would not make India free: “When our nationalists talk about ideals, they forget that the basis of nationalism is wanting. The very people who are upholding these ideals are themselves the most conservative in their social practice.” He clarified, “I am not against one nation in particular, but against the general idea of all nations.”

In December 1911, the Indian National Congress approached Tagore to write a poem to welcome King George V. Tagore smartly wrote a five-stanza-long hymn in Sanskritised Bengali, addressed not to the King but to God. The hymn was called Jana Gana Mana. In 1950, India adopted its first stanza, set to a martial tune rather than Tagore’s slow tempo, as the national anthem. 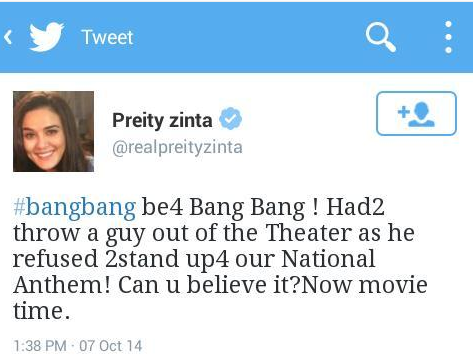 “Keep watch, India,” he wrote in another poem in Bengali on December 31, 1899, which he later translated as The Sunset of Century. The poem advises India, “Let your crown be of humility, your freedom the freedom of the soul/ Build God’s throne daily upon the ample bareness of your poverty/ And know that what is huge is not great and pride is not everlasting.”

If Tagore were to be unhappy to see today’s India mired in excessive nationalism, one thing would make him happy. He is the only poet whose poems have been adopted as the national anthem of two countries. Nationalism demands exclusive loyalty, you can either be Indian or Bangladeshi. When Bangladesh stands up for “Amar Shonar Bangla,” Tagore fails the loyalty test.

The law of the land

Patriotic Indians by definition follow the law of the land. Patriotic Preity and Salman M’s fellow cinema watchers should educate themselves in this regard. Not standing up to the national anthem is not a criminal offence. (If it were, you could play the anthem anywhere and jail people for not standing to attention!)

Sedition is a law the British created to put in jail all those who rebelled against the colonial rulers. It was read down (that is, reduced in scope) by the Supreme Court in 1962. The court ruled that sedition law, section 124 of the Indian Penal Code, would apply only if words against the state were accompanied by a direct incitement of violence.

As for Section 66A, the Supreme Court is currently considering whether it falls could of the Constitution.

Then there is also the small matter of absurdity. A country that plays the national anthem before letting you watch Bang Bang is a post-colonial caricature.

The literal cleansing of Urdu in India: Can a language be anti-national?