Contribute Now
Ad
Tea might seem to be India's best-loved beverage, but its popularity is actually the result of a careful propaganda effort. Like Christmas and diamonds, tea consumption is among the world's more successful advertising campaigns.

That's obvious from a section of the contemporary and political Indian art collected by  noted entrepreneur and hotelier Priya Paul. In 2008, Paul invited archivists at Tasveer Ghar, a digital repository of visual culture, to digitise her collection. They, in turn, asked scholars and historians to place the images in a historical context.

In her collection was a wide range of advertisements that portrayed tea drinking as a highly desirable activity. As it turns out, India owes its taste for tea and coffee to the diligent care of its former colonial overlords. Tea, particularly the Darjeeling kind, was introduced in plantations in North East India in the 1830s, as the British sought to destabilisethe  Chinese monopoly over the product, writes Philip Lutgendorf in an essay that accompanies Paul's collection of images of tea.

Tea plantations in India were initially meant to produce tea for foreign consumers. When tea consumption in Britain and the US began to stagnate around the turn of the 20th century, the British, ever the opportunists, decided to look to India to expand their markets.

The only problem was that Indians were extremely reluctant consumers of the combination of sugar, boiled leaves, water and milk.

In 1903, the British government established a propaganda unit, at first called the Tea Cess Committee, that was meant to propagate tea consumption. This board was funded by the proceeds of a tax on the export of tea. The government neatly renamed this as the Indian Tea Market Expansion Board in 1937.

Tea was so foreign to Indians – and for that matter Europeans – that the Tea Board's early ads had to include instructions on how to brew the product. The board also distributed small packets of tea, available for one paisa, in villages and to middle-class consumers. The tea shops that exist at railways stations and docks today are a product of the Tea Board's campaign, according to Vernon Wickizer in a book on the political economy of tea, coffee and colas.

Indians roundly resisted. Mahatma Gandhi was particularly scathing in Key to Health in 1942.

“The use of tea is said to have originated in China,” he wrote. “It has a special use in that country. As a rule one cannot rely on the purity of drinking water in China and therefore it must be boiled before use to ensure safety.

“In my opinion, the usefulness of tea, if any, consists in the fact that it supplies a warm sweet drink which contains some milk. The same purpose may well be served by taking boiled hot water mixed with a little milk and sugar.”

Typically, the most enthusiastic supporters of tea were also from groups that tended to be more Anglicised: Parsis and Bengali babus.

"An advertisement for the Thomas Lipton Company, published in the Coronation Durbar Souvenir edition of the Express in 1911 [...], conjures a vision of tea as a gift from brown-skinned colonial subjects, being offered to smartly dressed English ladies and a monocled gentleman, against a backdrop of an orderly garden plantation, with its bungalow-style factory building," writes Lutgendorf. "Yet this imperial infusion, steeped in porcelain china pots, accompanied by pitchers of warm milk and spoonfuls of sugar, had already begun to be savored by the bhadralok ('well bred') residents of Calcutta."

Here is a selection of images from Paul's collection. 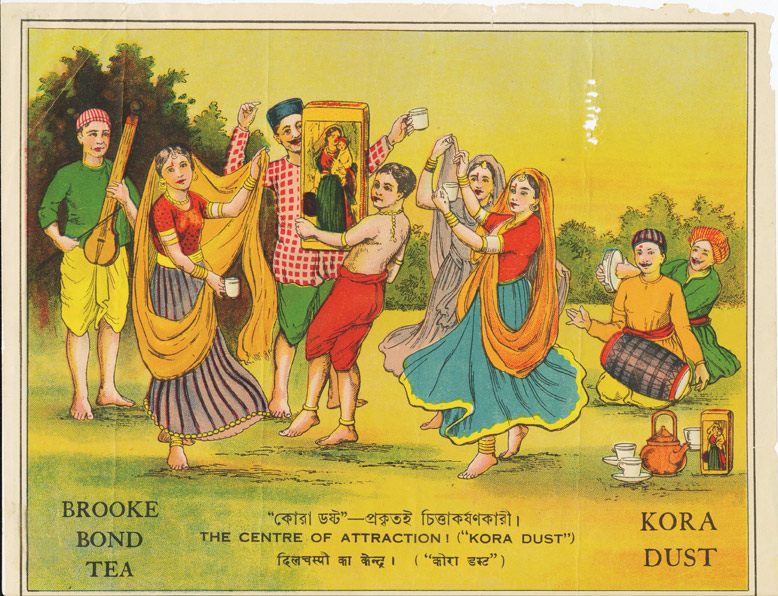 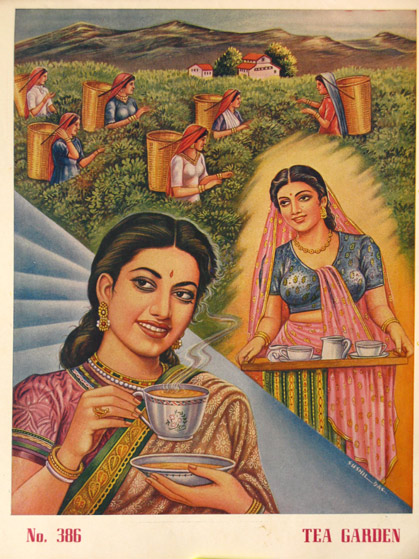 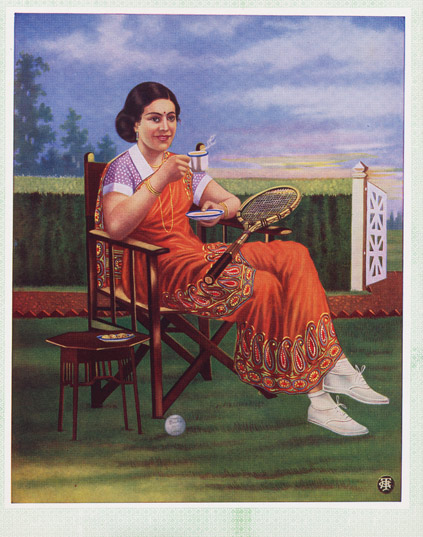 A woman tennis player having a tea break. Sample from a catalogue of calendar images, circa 1940s. 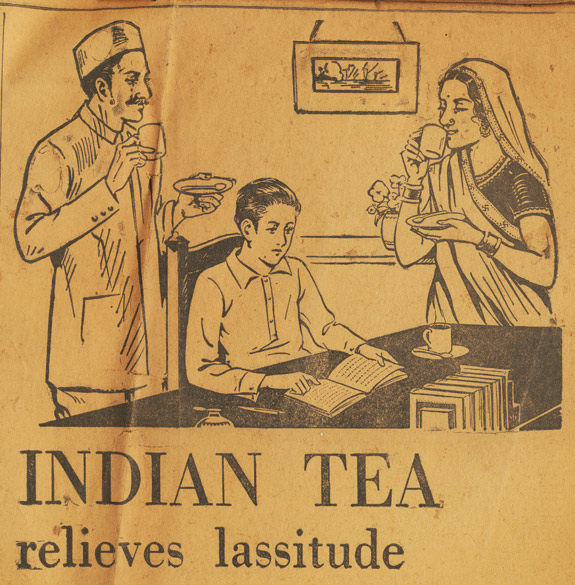 An advertisement in the Hindustan Times, ca. 1940s. 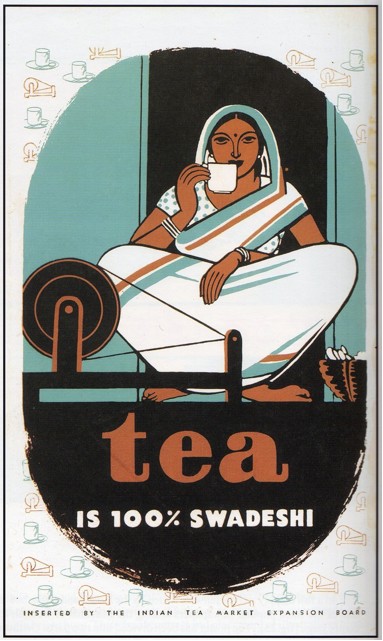 'Tea is Swadeshi.' Poster made for the Indian Tea Market Expansion Board, 1947. Reproduced from Gautam Bhadra, From an Imperial Product to a National Drink (Calcutta: CSSSC, 2005), p. 19, fig.24. 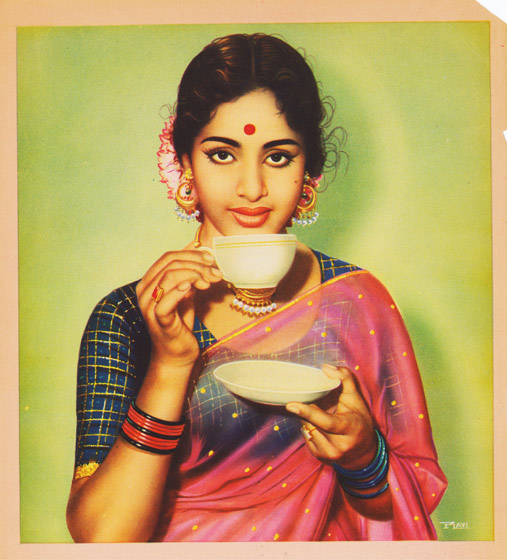 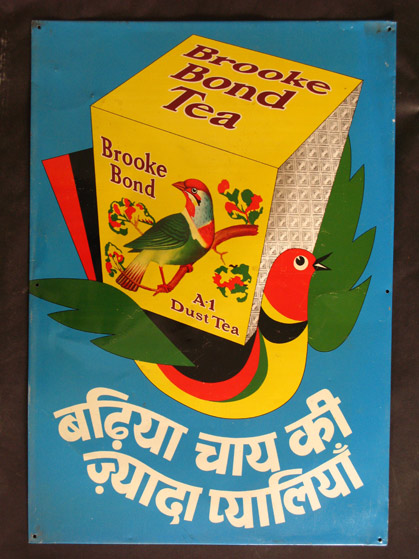 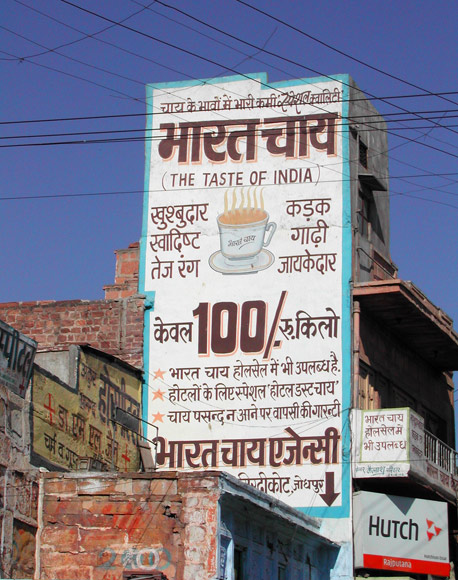