Contribute Now
Ad
The composition of the Rajya Sabha is a secondary yet important objective of state assembly elections, particularly for national parties. In May, the Bharatiya Janata Party’s massive victory did not impact its meagre representation in the Upper House, where it has 43 seats out of a total of 242.

Besides its 12 nominated members, Rajya Sabha MPs are elected indirectly by an electoral college composed essentially of legislators of the assemblies of the states and Union territories. Victories at the state level are therefore essential for the ruling party or coalition to secure a smooth passage of legislation. A strong Lok Sabha majority (282 seats in the present case) can be crippled by a hung, contrarian Rajya Sabha, where defeated parties and regional rivals may seek leverage either by taking revenge or blocking the majority’s political agenda.

The comparison with the current United States administration, paralysed by the disconnect between the House of Representatives, constituted by a Republican majority Congress and the Democratic majority Senate, comes to mind. This “partial majority” requires uncomfortable political manoeuvring to the legislation – something which the Bharatiya Janata Party would be happy to do away with.

This may explain the certain rage displayed by the BJP in the campaign for the last two state elections. Besides its enthusiasm to make repeated references to the continuity of the “Modi wave”, the saffron party is eager to increase its presence in the Rajya Sabha. But how soon or how far is this objective of catching up with opponents?

The two victories in Haryana and Maharashtra on Sunday certainly count towards that goal. The BJP currently has only two Rajya Sabha members from Maharahstra and none from Haryana. These two MPs are due for retirement in 2016 and 2018. Having won 42.36% of the seats in Maharashtra and 52.22% in Haryana, the BJP would logically gain at least with eight and two seats respectively. 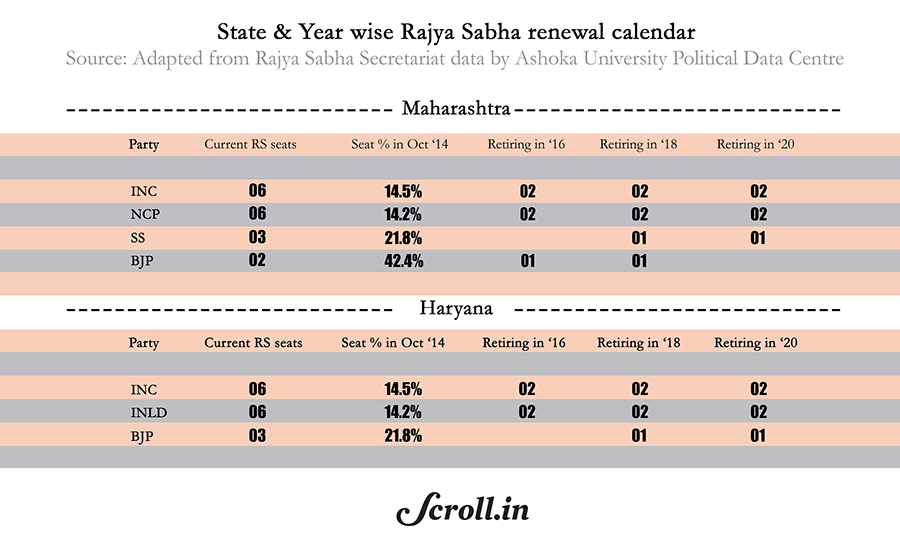 But the calendar of Rajya Sabha election will distribute these gains over a long period of time, as illustrated by this tables. In Maharashtra, six seats will be renewed in 2016, six in 2018 and seven in 2020. This means that the BJP will not reap fully the benefit of this state assembly election before four years, the last reshuffle having taken place soon after the last general elections.

If we look at the broader picture, 68 seats will be open to re-election in 2016, some in states where the BJP is currently poised to do well, like Bihar (five seats), Karnataka and Rajasthan (four seats) and Madhya Pradesh (three seats). The next important reshuffle will take place in 2018, with 10 seats in Uttar Pradesh, six seats in Bihar, five seats in Madhya Pradesh and four seats in both Gujarat and Karnataka, among others. 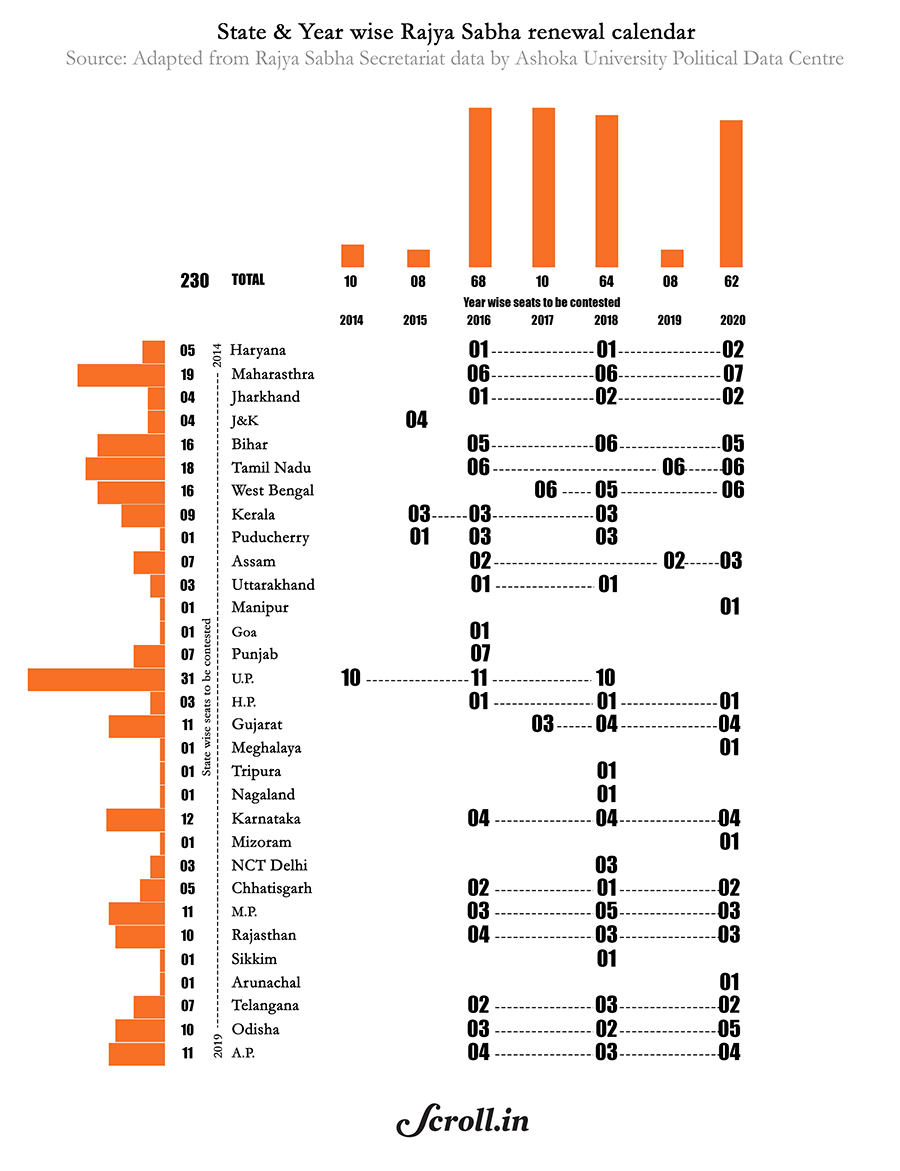 Of course, the political climate could change and the current surge of support for the BJP whither away. The BJP could compensate for the slow pace of the process by roping in more allies. But its current strategy, consisting in discarding age-old alliances to contest on its own, may not buy itself much goodwill. It is likely that the BJP will keep the same strategy as long as it work – or, in other words, until it doesn’t.

Even if the BJP could succeed in maintaining its current steam and thrive from regional success to success, the road to the control of the Rajya Sabha will remain a long and bumpy one.

Manipur assembly polls: A newly formed Kuki party has just won both the seats it contested