Become a Member
Ad
An advertising campaign urging India's shrinking Parsi community to go forth and multiply profusely has raised a small storm even before it hit the mainstream press.

"The kind of pressure these advertisements put on women and their bodies, the idea that a women’s life is not complete without a marriage and child, is appalling," said Simin Patel, a Mumbai-based researcher who is doing her doctorate research on the social history of the city's Parsi community. "The next series of advertisements will probably be on how to cope with the ‘failure’ of a miscarriage."

The ads have been launched by  Jiyo Parsi, a scheme announced by the Ministry of Minority Affairs in September 2013 to encourage the declining community to have more children.  Never a very large community in the first place, there were fewer than 70,000 Parsis in India as of 2001. The community has lived in India since  936 CE, when members arrived in Gujarat fleeing persecution in Iran.

The Jiyo Parsi scheme aims to spend Rs 10 crore over four years on medical assistance for couples attempting to conceive and on counselling youth to have early marriages and bear several children.

Though 7% of the funds were earmarked for the advocacy effort, Sam and Lara Balsara of Madison Advertising, both of whom are Parsis, decided to step in and create the controversial campaign without charging any fees. The campaign was shown to the press on Monday and appeared on a community website.

"While we have government assistance for medical intervention, the other, we also need to make people aware that there is a problem and it can be tackled," said Shernaz Cama, director of Parzor, an NGO associated with the Jiyo Parsi Scheme.

Parsis, however, are not pandas, so the implication that Parsis have an obligation to procreate and within the community, has raised eyebrows.

One ad in the campaign caused direct outrage even at the launch of the event. The ad shows Dadar's Parsi Colony with a sign saying "Hindu Colony" instead, saying "If you don't get married and have kids, this area will have a new name in your lifetime."

Cama said, however, that given the community's negative feedback, they would not publish this ad. "We have deepest respect for the Hindu community," she said. "We do not wish to offend anyone."

Jiyo Parsi plans to release these ads in leading Parsi-frequented publications in Mumbai over the next two weeks, including Parsiana, Afternoon and Mid-Day.

Here are the ads published on Parsi Khabar: 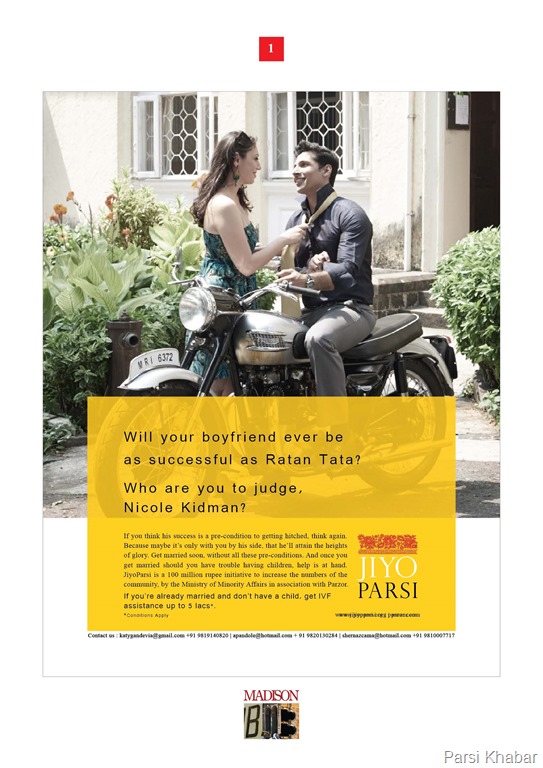 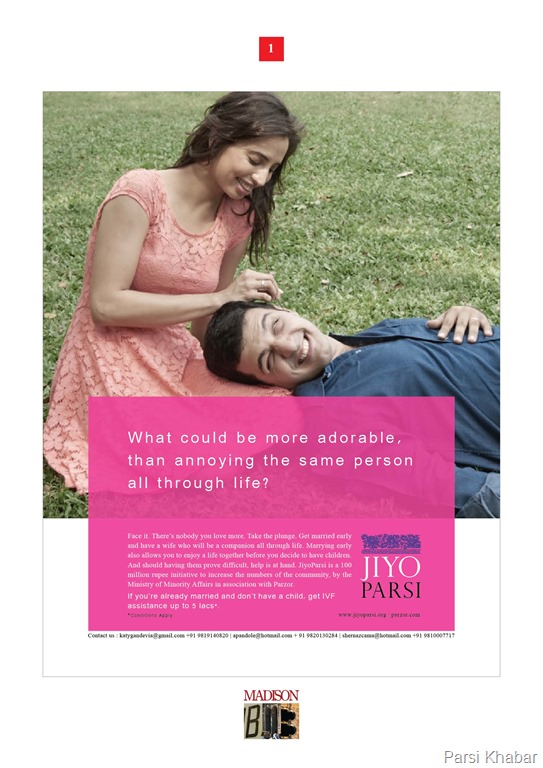 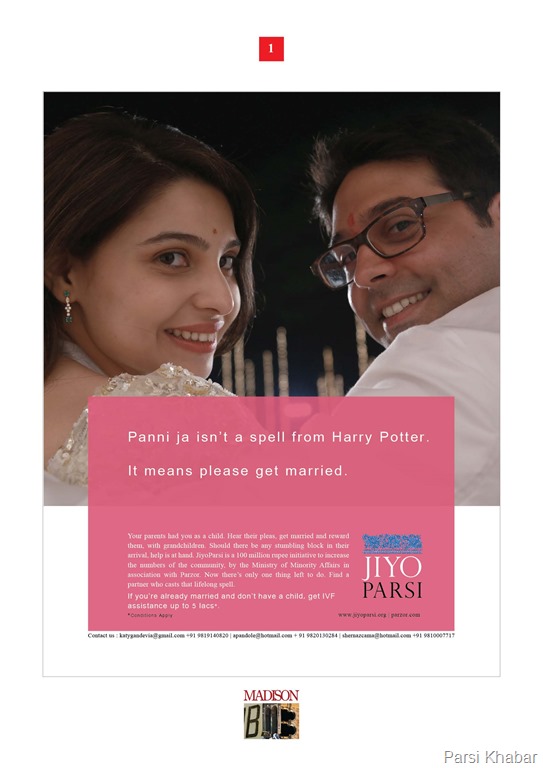 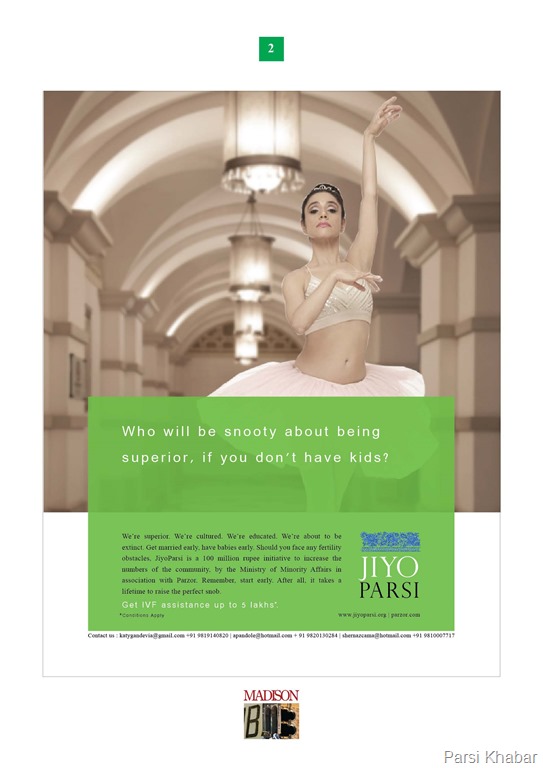 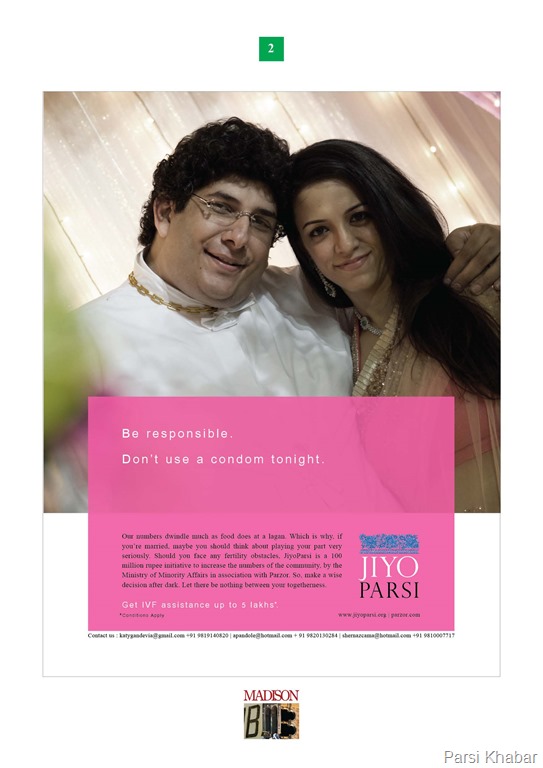 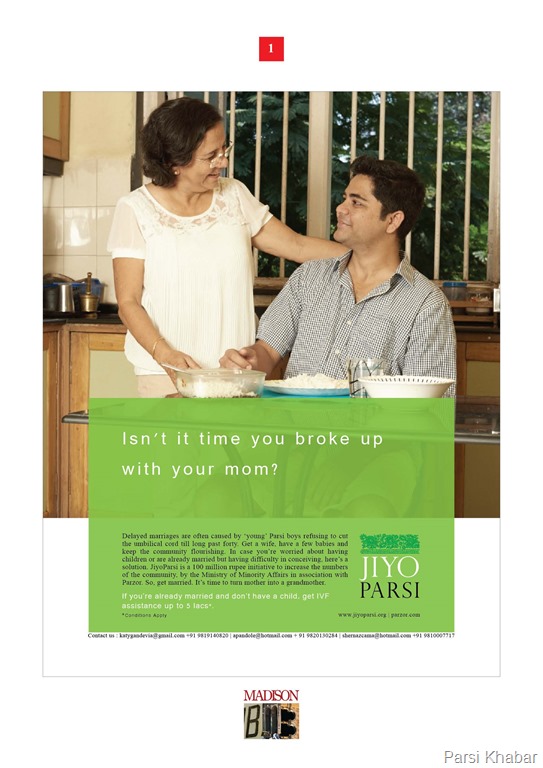 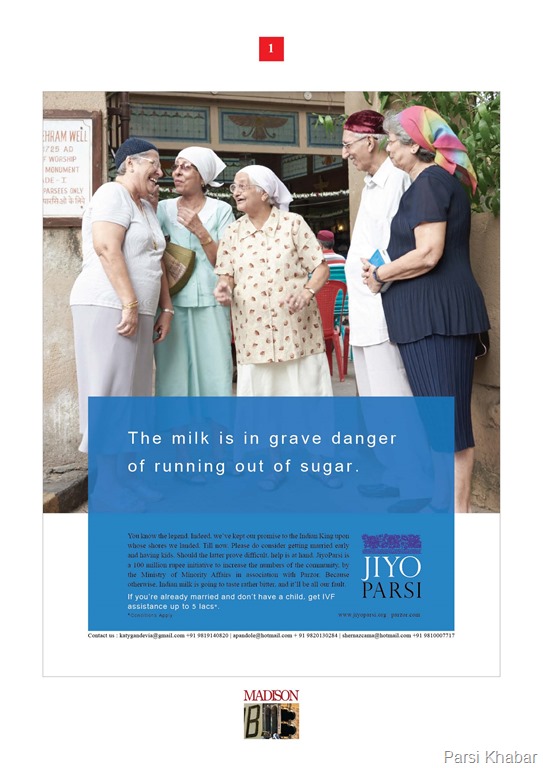