Become a Member
Ad
In a landmark deal, China and the United States, the world’s largest economies and polluters, have agreed to new and ambitious targets for cuts in their nations’ carbon emissions. The agreement, announced on Wednesday, is certain to impel a change in the positions of many participants in next year’s United Nations climate change talks in Paris. India, in particular, will have to review its strategy of been tag-teaming with China at global climate summits.

Under the US-China deal, President Barack Obama has agreed that by the year 2025, the United States will emit 26% to 28% less carbon than it did in 2005. To achieve this, it will have to double the pace of cutting emissions it achieved from 2005-2020. In return, President Xi Jinping has agreed that China’s emissions will peak around 2030, after which a drop can be expected.

“This is smart politics,” said Navroz Dubash, a senior fellow at the Centre for Policy Research in Delhi. "The US target and the Chinese peaking year will certainly require some effort, but they are probably not stretch targets. It allows both to claim leadership in breathing life into climate talks.”

For India, the deal means that it can no longer hide behind the reluctance – which China shared previously – to commit to emission caps that would limit GDP growth. Nor can it now secure Beijing’s support when bargaining in future multilateral meetings. The deal also means that a lot may depend on Delhi’s bilateral ties with Washington before the Paris discussions in December 2015.

This is a sharp departure from the past. After the 2009 climate talks in Copenhagen failed – because of lack of consensus on how to reduce global warming by 2 degrees Celsius by the end of the century – India and China had allied to increase their bargaining power in other multilateral fora, such the ones discussing relaxation in intellectual property laws that both could benefit from.

Of course, the US-China deal is not without criticism. Its terms – more than its targets – could short-change India when the country is at the bargaining table in Paris.

The 26%-28% cut below 2005 levels promised by Washington is about 8% of the levels of carbon the US produced in 1990. Even under the 1997 Kyoto Protocol, an international treaty that required countries to commit to reducing greenhouse gas emissions, the United States was supposed to reduce its emissions by 5%-7% from 1990 levels.

“The year 2005 is an easy target for the United States because its shale gas usage slashed emissions during this period,” said Arun Mohan Sukumar, senior fellow at the Centre for Communication Governance in Delhi. At the time, the US had imposed regulations on its coal-based power plants that led to increased reliance on shale gas, whose processing and use emits less methane, a greenhouse gas. At Copenhagen, India committed to a 20%-25% reduction from the 2005 levels by the year 2025. These are the lowest common denominators for countries to sign up to.

China too gets some leeway in the new agreement. Pavan Srinath, head of policy research at the Takshashila Institution, Bengaluru, pointed out that the “size of China’s emissions peak remains unknown and that gives it a lot of wiggle room”. While the deal is itself legally binding, “there is no tangible enforcement mechanism presented, nor does one seem feasible”.

The United States-China bilateral deal reduces the negotiating power of the already fractured BASIC (Brazil, South Africa, India and China) and G77 groups by robbing them of China’s bargaining power. Irrespective of what its emissions peak to, China has been confident enough to announce that in order to meet its targets, it will expand its share of consumption of renewable energy to 20% by 2030.

As US senator John Kerry pointed out in an op-ed in The New York Times, this means that it will have to deploy at least 800 gigawatts of renewable energy generation, such as more solar and wind power generators and nuclear power plants.

Without China in the picture as an ally, “the chances of India and other developing countries getting a better deal on technology transfer and funding, which require extensive negotiations, are slim”, said Sukumar. “India can commit to a similar target in Paris next year, but what is the point of signing a treaty that neither gives you benefits nor tackles climate change?” 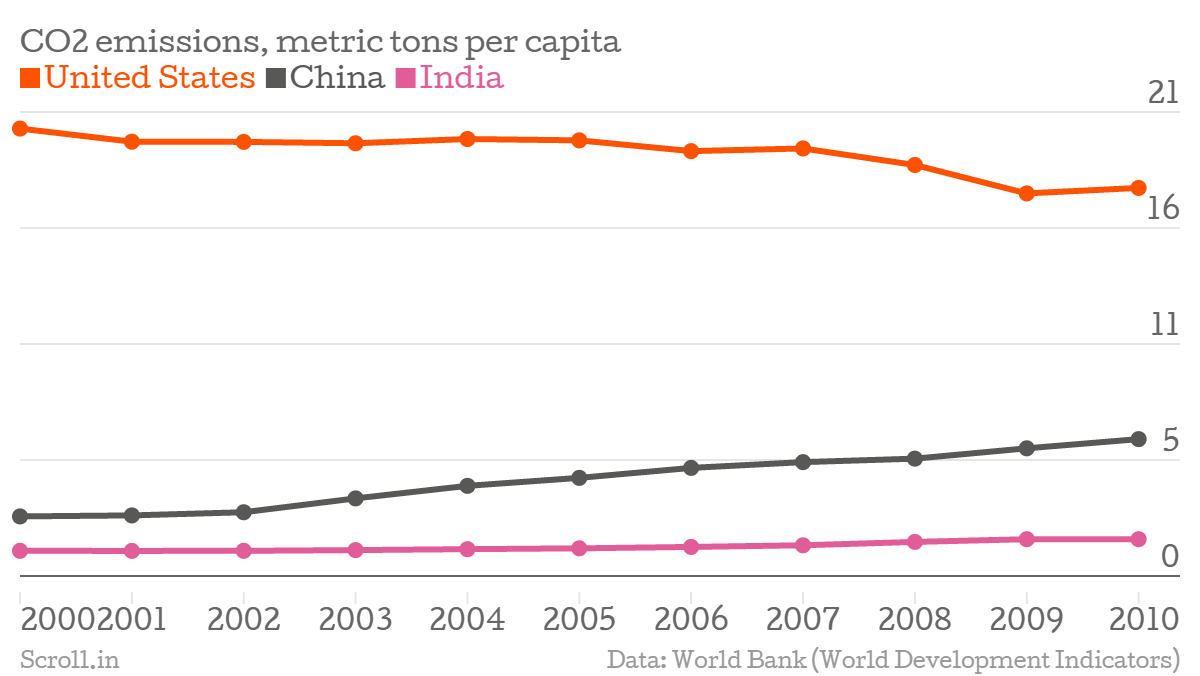 As the chart above shows, India’s per capita carbon dioxide emissions are lower than China’s and United States’. But global talks on climate change are starting to focus on goals for the post-2020 period, when countries like India and China will be even more growth-focused and thus may have to transition from emission limits normalised to their population to limits normalised to their GDP.

Srinath noted that India now runs the risk of becoming painted into a corner in spite of significant efforts at home to promote renewable energy. With China having decided to play its own game, the ball is squarely in India’s court to chart out its domestic climate strategy. As Dubash put it, “The only way for India to square this circle is to create conditions to deliver more emission restrictions than countries actually promise and push for tighter limits.”