Contribute Now
Ad
One morning in early November, at the creche in Karli village in Chhattisgarh's Bastar district, babies rolled on the mud floor and the cook of the day stirred a pot of vegetables, when Shanti stepped on the weighing scale and caused a minor earthquake.

Ramsheela, the community health worker, was ecstatic. Not often did a woman in the village make the scales tip over the 40 kilos mark.

Jotting down the weight of the young woman pregnant with her first child, Ramsheela turned to me and said, "Shanti’s husband is the panchayat secretary." Bringing home a government salary, he could afford a diet for his family that the others in the village could not. "Besides," she added, with a smile, "theirs is a love marriage."

Blushing at the attention, Shanti stepped off the scale. Twisting the corner of her sari pallu, she went back to sit on with the group of pregnant women and young mothers.

Payake, seated next to her, mother of three, weighed 34 kilos.

The underweight women in Karli village

Such severely underweight and anaemic mothers make up the norm in Chhattisgarh’s tribal villages. Poor in health and nutrition, they give birth to weak babies. Forty eight out of 1,000 babies in the state die before they turn one. Those who survive grow up malnourished. According to the last available national family health survey, 53% of the state's children are stunted, 24% are wasted, and 48% are underweight.

In India, the fight against child malnutrition has revolved around anganwadis or feeding and day care centres run under the Integrated Child Development Services, a scheme launched in 1975. Despite being in operation for four decades, the scheme remains inadequate to the challenge of reducing child malnutrition. Part of the reason is that it focuses on children older than three.

In every anganwadi, two workers serve hot cooked meals to children aged between three-six years. The same workers are expected to deliver packets of dry food rations to infants, pregnant women and nursing mothers. But poorly paid and lacking motivation, they rarely take the trouble. Even when they do, the rations act as poor supplements, unable to compensate for the lack of proteins, vegetables and oil in a child's diet.

The result is that the most crucial stages in a child’s development – as a foetus in the womb of the mother and as a breast-feeding infant – go without nutritional support, leading to stunting, which is hard to reverse in later years. 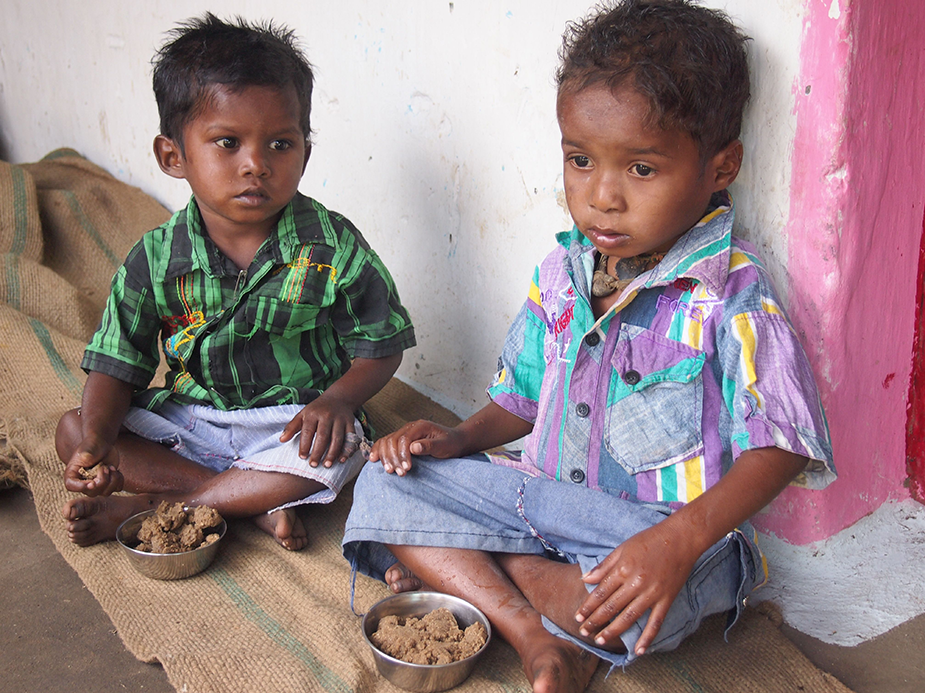 Nearly half of Chhattisgarh's children are stunted

These facts are well known but state governments are reluctant to expand the coverage of anganwadis to younger children. Infant care is a more difficult task and would require a greater number of staff per creche, which would escalate costs.

Though Andhra Pradesh runs World Bank-supported nutrition and daycare centres for infants in a few districts, the model is too expensive for poorer states to adopt. The irony is that the poorer states have a much bigger problem of hunger and malnutrition. So is there no hope for affordable baby care in these states?

For a while, it seemed Chhattisgarh had found an answer.

In the summer of 2012, the state's tribal districts got a second round of central funds under the Integrated Action Plan, meant to develop Maoist-affected areas.

Keen to use the funds well, R Prasanna, the district collector of Surguja, sought advice from a group of health activists visiting from the state capital Raipur.

One of them, Samir Garg, a right to food activist and co-ordinator of the state's community health worker programme, came up with an idea: creches for infants run by mothers.

Evocatively named fulwaris, or flower gardens, these creches did not need any staff. All that the administration had to do was provide money to buy food. The funds could be transferred to the panchayat, which could hand them over to a committee of mothers. The committee could source the food within the village or buy it at local markets, and the mothers take turns to cook and serve it to their children.

As long as the mothers were willing to volunteer one day per week, the fulwari could be run on rotation. For every day that she fed and took care of children other than her own, a woman would be free on six other days to go to work, leaving behind her child in another woman's care. Pregnant women and nursing mothers too could come and eat at the fulwari, which would function out of a home or building provided by the village.

Freed up of staff and building costs, in just Rs 50,000 every year, 12 children and five mothers could get a high-quality diet: not just grains, lentils, vegetables, but also eggs, at least two per week.

Excited by the idea, Prasanna pushed for its implementation. The first fulwari opened in August 2012. By the end of the year, 300 fulwaris had been set up in Surguja's tribal hamlets. More than 3,500 children and 650 mothers were being served hot, cooked meals.

Last year, in December, I travelled to the tribal hamlets of Surguja's Lundra block, where on the walls of mud huts, women had painted food menus and weekly duty charts. Children played outside the fulwaris, while the mother-in-charge cooked the meals inside. In all five fulwaris that I visited, the food looked fresh and inviting: green leafy vegetables cooked with dal, rice, and in some villages, with eggs.

The eggs had made the greatest impact on the children. "The day we cook eggs even the older children from the anganwadis show up to eat," laughed Vimla Vati, a young mother I met in Sasoli village. 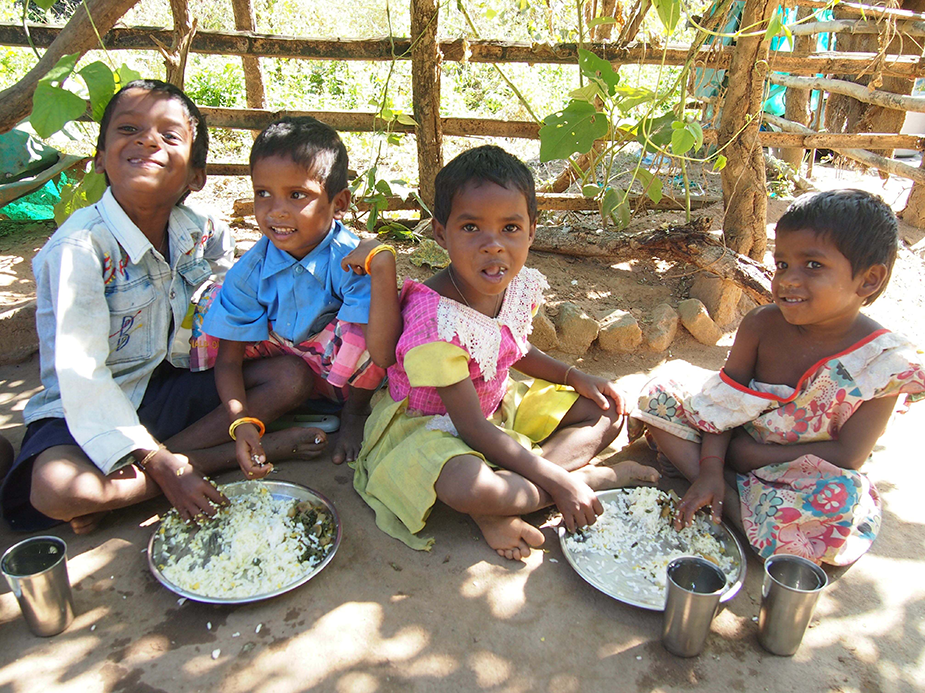 Even older children are drawn to the food at the fulwaris

Not only did the mother collectives bring a warmth and intimacy to fulwaris that was absent at anganwadis, they also introduced a greater transparency in the use of funds. It helped that the funds came straight to the panchayat, which made them easier for the women to access them.

"We have seen enough of the top-down approach," said R Prasanna, the district collector. "It does not work. It is time to let the community take charge of its own development."

It was not the first time that Chhattisgarh was placing village communities at the centre of social programmes. The state had earlier raised a corps of women health volunteers called mitanins. The programme had been successful enough for the centre to use it as the template for the national community health worker programme.

Even in the fulwari programme, the mitanins formed the backbone, helping mothers maintain accounts and records. The most important record was the weight chart of children. In one of the villages, Pramila, a mitanin, showed the chart to me, noting with a great sense of pride that the weight of children attending the fulwari had shown a steady and consistent rise.

The observations of mothers and mitanins are now backed by the results of a study done by UNICEF in collaboration with Pune's Centre for Learning Resources. The study tracked 700 children in Surguja's fulwaris for one year and found that the malnutrition rate among them reduced by 24%. The pace of reduction was nearly 25 times faster than what the state had achieved in the seven years between two national family health surveys. The rate of decline in severe malnutrition among the children was even higher at 38%. One-third of the children attending the fulwaris came out of malnutrition within one year. An earlier study done by the Ravishankar University and JN Medical College of Raipur had also found that children attending fulwaris were gaining weight much faster than those who were not.

Such compelling evidence led the state government to expand the scheme to all the tribal blocks in the state. In 2014-15, it doubled the scheme's budget to Rs 20 crore. This would cover as many as 100,000 children and women in 5,700 hamlets around the state.

But before the money could be disbursed, the department of panchayat and rural development, which had seen a change of leadership after elections, also had a change of heart.

The new minister in-charge of the department, Ajay Chandrakar, a politician with the reputation of being a strongman, held a consultation meeting with officials and experts soon after taking charge.  According to a non-government expert who attended the meeting but did not wish to be identified, Chandrakar asked why the department should be implementing the fulwari scheme. "The minister seemed to be suggesting that the department had better things to do than waste time over a scheme for women and children," said the expert. "As if, the scheme was not macho enough."

Scroll made several attempts to contact the minister but could not get through.

In September, the panchayat secretary, M K Raut, wrote to the department of women and child development. In the letter, of which Scroll has a copy, Raut asked the department to take over the implementation of the fulwari scheme because its "objective" was closer to the other schemes run by it.

"The secretary seems to have forgotten that one of the objectives of the fulwari scheme is to involve panchayats in health and nutrition," said the expert. "Malnutrition is a multi-factoral problem which can only be tackled by working simultaneously on health, agriculture, horticulture, women and child development, and that's something that can be best done at the local level by panchayats."

Speaking on phone, the panchayat secretary, MK Raut, denied that his department was abandoning the scheme. "Because its objectives are closer to the women and child development department, we are transferring the budget for the scheme to them," he said, "but it is wrong to say that panchayats would not be involved in the scheme."

On the ground, however, those involved in implementing the scheme were alarmed and dismayed to hear about the imminent change. "The only reason the village women are able to access the funds is because they come to panchayats," said Chandu Naik, the co-ordinator of the mitanin program in Dantewada's Kuakonda block. I met him outside the fulwari in Renganar village. We stood talking in the middle of children racing up and down, some tossing a ball to each other, while the two mothers on duty cooked lunch for them.

Naik explained that while the mothers could exert pressure on the sarpanch and secretary who lived in the same village and who could not afford to entirely ignore the community's demands, it would be harder for them to deal with distant pariyojana adhikari or officials of the women and child department who were based in the district headquarters.

"If the fulwari was to be taken out of the control of the panchayat," he said, looking in the direction of a desolate building across the fence, "it would begin to look like this..."

The building was the village anganwadi and it was shut.