Contribute Now
Ad
The major outbreak of foot and mouth disease last year, that killed thousands of cattle in India’s five southern states, may have been caused by the use of substandard vaccines, says a new report.

A team of scientists from the Chaudhary Charan Singh National Institute of Animal Health in Baghpat, Uttar Pradesh, tested samples from 52 batches of vaccine provided to the Foot and Mouth Disease Control Programme by three companies. These were Indian Immunologicals, Intervet India, and Brilliant BioPharma. The scientists discovered during the testing that none of the batches had the required stability and at least 10 failed the standard for sterility.

The report, published on the academic social network ResearchGate, concludes that “poor quality of vaccines…might be responsible for [the] series of outbreaks encountered in vaccinated population in different parts of the country”. It questions the evaluation procedures of vaccine testing facilities at the Indian Veterinary Research Institute in Bengaluru, which had not reported anything amiss with the vaccines.

The National Institute of Animal Health is a unit of the Department of Animal Husbandry, Dairying and Fisheries of the Ministry of Agriculture. One of the companies whose vaccine it faulted – Indian Immunologicals – was reported in September to be the world’s largest producer of the foot and mouth disease vaccine with advanced facilities and the capacity to produce 360 million doses every year.

Foot and mouth disease is an infectious and often fatal viral disease that affects cloven-hoofed animals, especially cattle. Domestic animals need to be periodically and repeatedly vaccinated to protect against the disease. The government started the Foot and Mouth Disease Control Programme in 2004 with the aim of eradicating the disease in India. The programme now covers 167 districts in the country, including all of south India. In 2013-14, the programme carried out close to 193 million vaccinations at a cost of about Rs 224 crore.

Last year, the Project Directorate on Foot and Mouth Disease reported 228 outbreaks across Karnataka, Kerala, Andhra Pradesh and Tamil Nadu, an increase of four times over the previous year. The directorate attributed the infection and deaths to the lack of, or delayed, vaccinations; an extended monsoon; and the lack of sanitary conditions for the animals.

Data from the Ministry of Agriculture shows that while foot and mouth disease outbreaks in India in 2013 may have been fewer than in previous years, the number of infections and deaths in each outbreak among cows, buffalo, sheep, goats and pigs shot up dramatically. 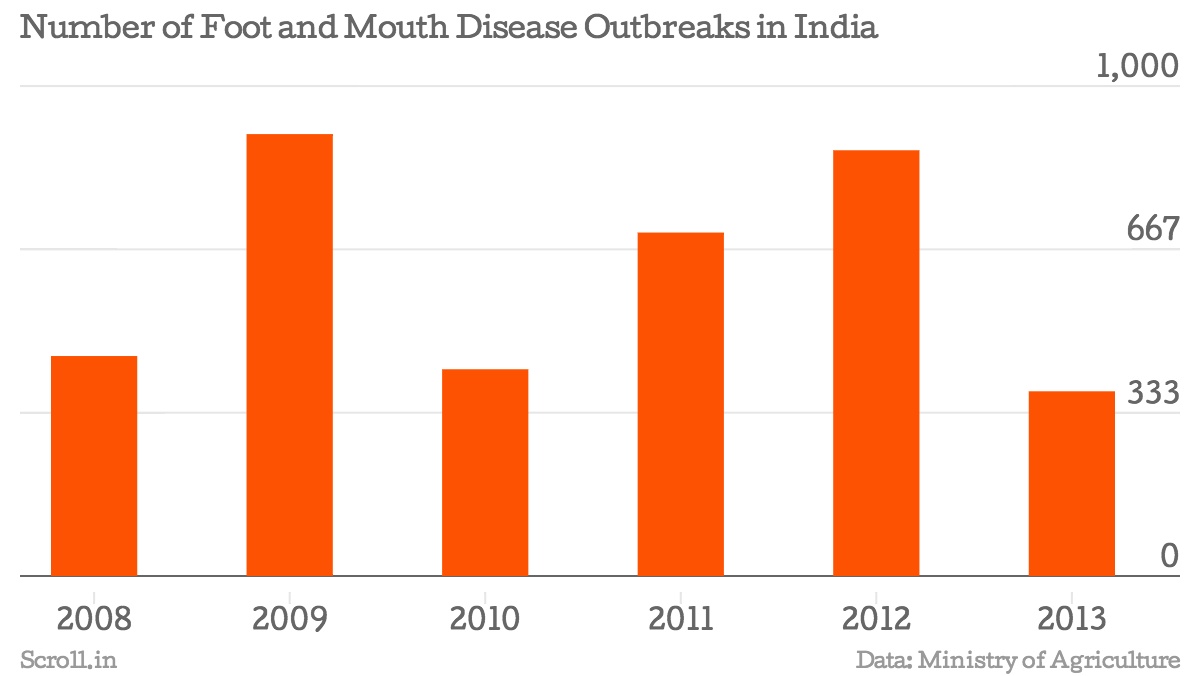 The Ministry of Agriculture has issued a notice to the three companies providing the vaccine to the foot and mouth disease programme and ordered further testing of vaccine samples. Simultaneously, Minister of State Sanjeev Kumar Balyan has cracked the whip on the National Institute of Animal Health. He has ordered a three-member committee to look into the competence of the institute’s staff in conducting vaccine testing and into the role of its acting director in making the report public.